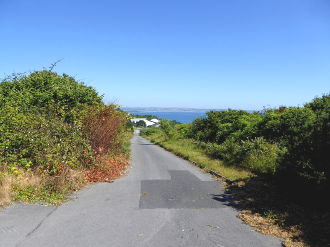 The Admiralty Incline Railway was a cable-worked incline railway of mid-19th century origin in the north-east region of the island. It was built in 1848-49 to transport stone from the Admiralty Quarries down to Portland Nore for use in the construction of the breakwater arms of Portland Harbour. The route of the incline railway is now Incline Road, a private road leading into the former naval dockyard, now Portland Port.

History
Creation of a harbour of refuge, and establishment and use of the incline railway
The first proposal to transform Portland Roads into a harbour of refuge was made by John Harvey of Weymouth in 1794. Although his suggestion was not received with great interest at the time, the fear of French invasion leading into the 1840s played a key part in generating support for such an idea. In 1845, a naval commission recommended the anchorage be transformed into a harbour of refuge and Royal Assent was obtained in 1847, allowing two breakwater arms to be constructed between 1849-72. Meanwhile, the new works allowed the Royal Navy to gradually establish a base at Portland.

In order to provide labour for the large-scale quarrying of stone needed to build the breakwaters, Portland Prison was opened at Grove in 1848. In August of that year, work commenced on the construction of the Admiralty Incline Railway, which was completed during the following year. The railway was designed by engineer-in-chief James Rendel to transport stone down to Portland Nore, where the breakwaters were to be built from. In 1849, the extensive Admiralty Quarries were also established, covering land to the north of Grove Road and along East Cliff to Verne Hill. During that year, the convicts laid temporary railway tracks throughout the quarries, linking the working areas to the top of the Incline Railway.

The Incline Railway was made up of three aligned slopes, each being 1,500 feet long. These three slopes - upper, middle and lower - each had their own drum house, containing an overhead brake drum which controlled the galvanised steel cables of each slope. The incline would transport the stone on wagons, with the cables and screw brakes controlling their decent. At the top of first slope, a weighbridge was built to record the number of wagons, as well as the weight of each one, passing down the incline. Civilian contractors took responsibility of the wagons once they arrived at the top of the incline from the quarries.

The incline primarily operated with two tracks of 7ft broad gauge. The fully-loaded wagons traveled down one track, and by using a counterbalance method, empty wagons would be pulled back up to the top of the railway on the second track. When the railway was established, a third track had been used for a brief period as sidings and for construction work purposes. Although the middle slope had a 1 in 10 gradient, the upper and lower slopes were steeper at a 1 in 15 gradient. After the wagons reached the bottom of the railway, they would be taken out to sea on timber staging. Once in position, their trap door would be opened, allowing the stone to fall into place. Initially, the wagons were exclusively moved along the staging by horses, until the first steam locomotive arrived in the summer of 1851.

Over the course of the breakwater's construction, an estimated six million tons of stone was used. At peak times, the Incline Railway would send between 2,500-3,000 tons of stone down to the harbour per day, while one week saw a record 25,000 tons sent from the quarries. As the quarrying progressed, locomotives started to be used and at the top of the incline, the Admiralty constructed a locomotive shed/workshop, now known as the Old Engine Shed, for the use of the Admiralty Quarries. Meanwhile, stone extracted from the excavation of the Verne Citadel's ditch would also be used on the breakwaters. From the ditch, the stone was sent down a rope-operated incline, located to the east of the citadel, where it then connected to the middle slope of the Admiralty Incline.

Later use of the incline and closure
After the completion of the harbour's original breakwater arms in 1872, the Incline Railway's use dramatically declined. In 1874, the Admiralty had come to an agreement with Great Western Railway and London and South Western Railway for an extension of the Weymouth to Portland branch line to the dockyard. This was completed in 1876, providing the working naval base with its own upgraded railway system. The Incline Railway was partially dismantled during this period, although its drum houses remained in place. Between 1890-96, work was carried out to upgrade the coaling facilities within the dockyard, with Messrs Hill & Company of Gosport as the contractors, and the Incline Railway returned to full operational use for the project.

Meanwhile, the 1890s saw rising fears of Portland Harbour's vulnerability to torpedo boat attack, leading to plans being made for its complete enclosure with a further two breakwater arms. Prior to the construction of the new arms, work on temporary measures was carried out in 1894-95 by Messrs Hill & Company in 1894-95, primarily as they held the existing contract for use of the Incline Railway in connection with the coaling pier works. A 600 yard bank of stone spanning out from Bincleaves was formed and a line of dolphins (structures of timber and iron) holding boom defences in place were placed across the open section of the harbour.

Construction of the new breakwaters began directly under the Admiralty's New Works Department in 1896 and Messrs Hill & Company took over as the contractor in 1898. For their construction, the Incline Railway once again transported stone from the Admiralty Quarries and surrounding area down into the naval dockyard. As part of the preliminary work, a new double track of narrow gauge was laid on the incline. Once sent down to the dockyard, the stone was taken to a newly-built jetty, where it was loaded onto hopper barges using steam cranes, and the barges were then towed by tugs out to the construction site.

After the new breakwaters were completed in 1905, more stone was produced in 1909 to raise the height of the north-eastern breakwater arm. Following this, the Admiralty Incline, along with the tracks within the Admiralty Quarries, remained in place in a state of readiness. Although the line's use remained infrequent, it would continue to transport stone from the quarries whenever the Admiralty required some to carry out minor maintenance on the arms.

Portland Prison was converted into a Borstal Institution in 1921, which ended convict labour in the quarries as the work was deemed unsuitable for the 16-21 year old boys. The Admiralty would then contract civilian labourers to undertake the small scale quarrying when stone was required for the maintenance of the breakwater arms. The Admiralty Quarries closed completely in 1936 after the Admiralty negotiated a deal with local stone companies to supply them with any stone they might require in the future. With the closure of the quarries, the Incline Railway's tracks and brake houses were removed, as was the locomotive from the Old Engine Shed.

Following its closure, the route of the Incline Railway was transformed into a road leading into the naval dockyard. The road, named Incline Road, remains today, entering the Upper Osprey area of the now civilian-based Portland Port. 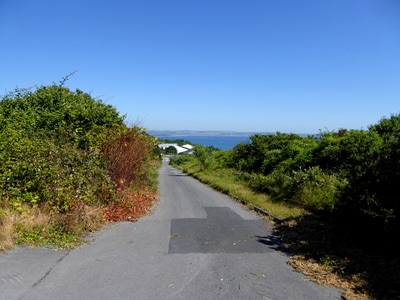 The top part of Incline Road, where the railway once ran down to the dockyard. 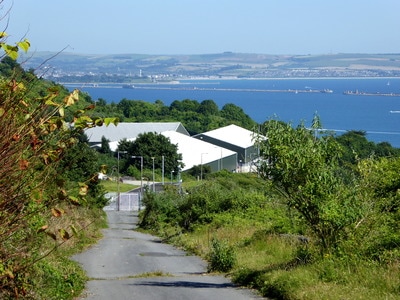 The railway would have run through the gate and past the modern port stores. 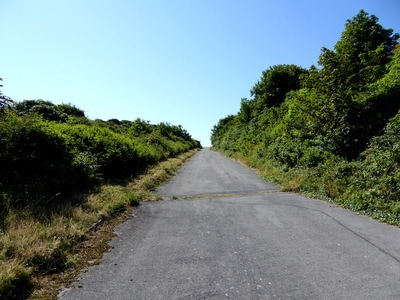 Looking up to the top of Incline Road. 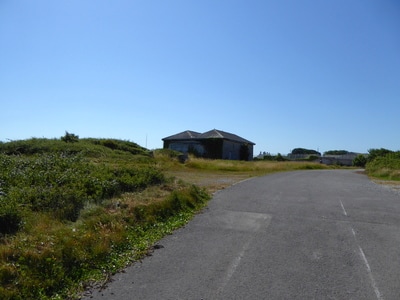 The top area of the incline, with the Old Engine Shed further ahead. 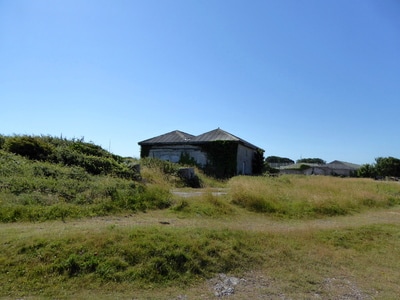 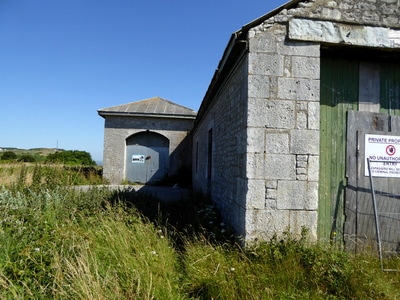 The shed was primarily used to house locomotives for the Admiralty Quarries. 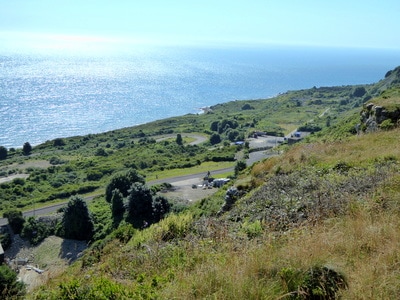 A view over East Weare from East Cliff. The route of the railway, now the road, can be seen running through port property. 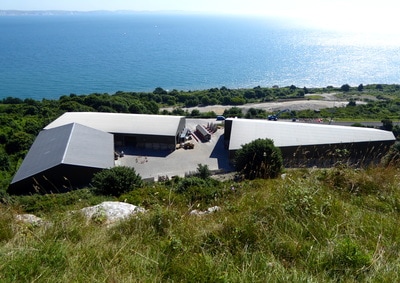 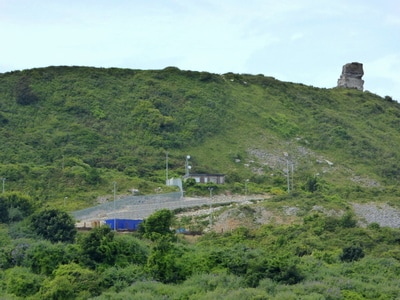 The route of the railway ran down this part of Portland, past the building seen in the centre of the photograph. 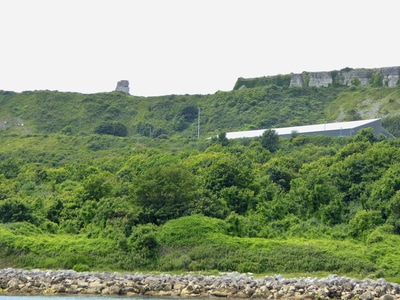 And continued down towards the dockyard. 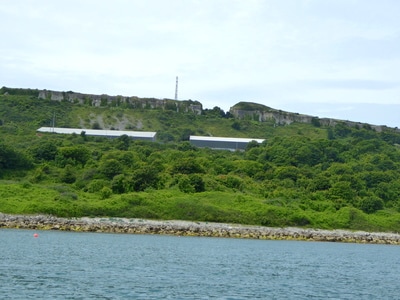 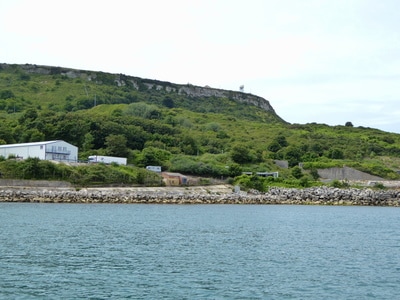 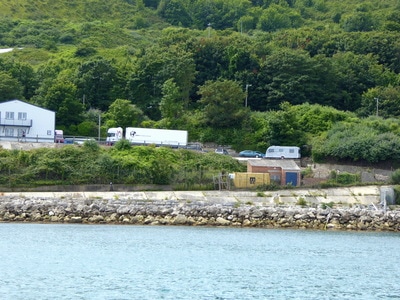 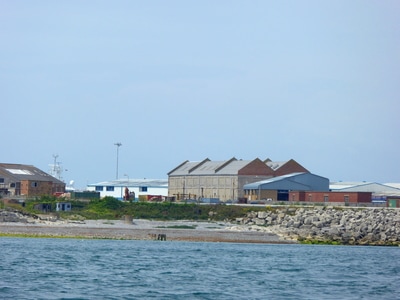 Part of the dockyard area seen from the sea. This is where the Incline Railway terminated and the stone wagons taken out on the timber staging along the breakwater arm. 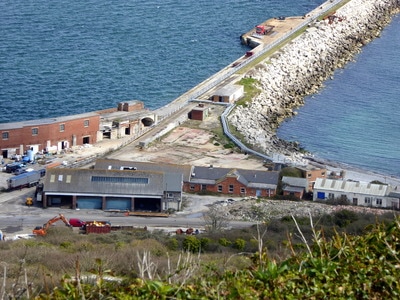 Another view of this part of the dockyard from the Verne Citadel above. 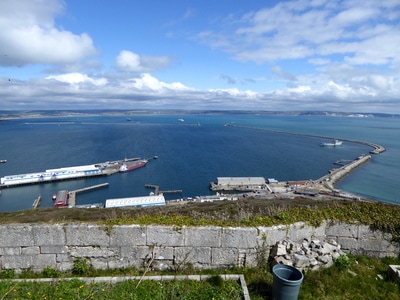 A good panoramic view across Portland Harbour. All four breakwater arms used stone provided by the Admiralty Quarries and carried down the Incline Railway. 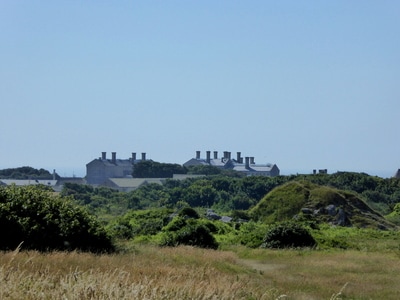 Looking across a large area of the former Admiralty Quarries and towards HMP/YOI Portland. 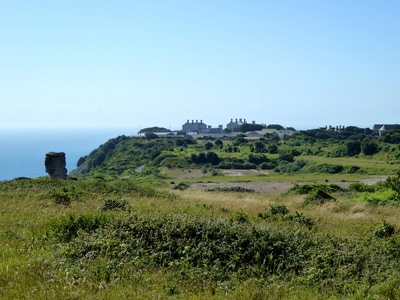 Another view of the surrounding area that produced stone for the breakwaters. 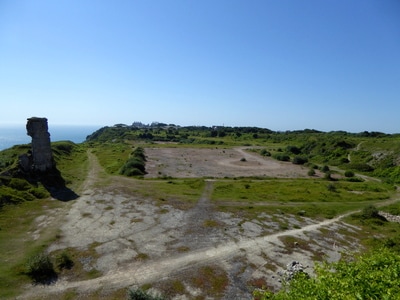 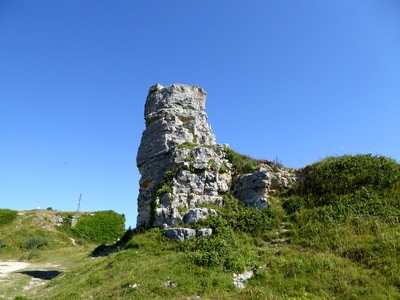 This 30-feet pillar is known as Nicodemus Knob, marking the original height of the land before it was quarried away. 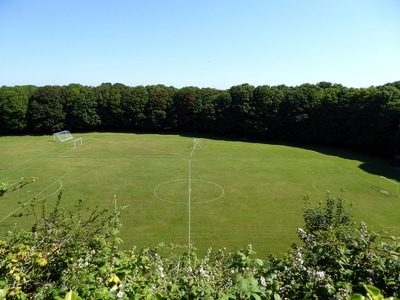 In one part of the Admiralty Quarries, this sports stadium was constructed out of an old quarry pit in the 1930s.