All Saints' Church is a Church of England church of early 20th century origin at Straits, Easton. It was consecrated in 1917 and has been a Grade II listed building since September 1978. The church succeeded St George's as the parish church of Tophill. It has been described as the finest ecclesiastical building on Portland and remains active to date as part of the Portland Parish, which also includes St John's and St Andrew's.

History
All Saints' Church was built to replace St George's as Tophill's parish church. During the late 19th century, Portland's rector, the Bishop of Salisbury and many of the island's congregation expressed support for a new church to be constructed, and a September 1891 meeting on the matter, held at St George's School, confirmed one would be built. Portland's rector of the time, Rev. John Augustine Beazor, felt that St George's had become "detrimental to the progress of the Church on the island". One of the primary issues revolved around the original decision to sell the church's seating as freehold. Not only had the pew owners become untraceable as they were split between hundreds of members of Portland families over time, but it was felt their freehold status discouraged many members of the congregation from attending services. Furthermore, the church had gained a reputation for being uncomfortable and cold in the winter due to the lack of heating apparatus.

The new church scheme was subsequently approved and plans for the building were drawn up by the local architects Messrs Crickmay and Sons. The original site proposed for the church was at the junction of Moorfield Road and Wakeham, although the cost of purchasing the land was considered prohibitive. Efforts towards funding the scheme did not begin until after Rev. David Barnes Griggs succeeded Rev. Beazor as Rector of Portland in 1909. The fundraising for the church began at the beginning of March 1910 and by the middle of the month had reached £1,590, which included a joint donation of £1,000 from Mr. Henry Sansom and his son Mr. Henry John Sansom. In November 1910, Mr. John Merrick Head, owner of Pennsylvania Castle, donated a plot of land at Straits for the proposed church.

Over £2,800 had been raised by the end of 1910 and this had increased to £5,000 by early 1914, allowing construction of the church to commence. To celebrate the raising of the money, a thanksgiving service was held at St George's on 12 February. The chosen site for the church was open land at Straits, which was donated by Mr J. Merrick Head, owner of Pennsylvania Castle. Messrs H. Pittard and Son were hired as the building contractors, with Mr. Crickmay supervising the work. By the time the foundation stone was laid on 6 May 1914, Rev. David Barnes Griggs was Portland's rector. The foundation stone was laid only weeks before the outbreak of World War I, but despite this work continued to progress throughout the following years.

The church fund had reached £10,500 in late 1916, which covered all building work except for the proposed church tower, along with architect and surveyor fees and other minor expenses. Construction had progressed far enough to allow All Saints' to be opened to worshippers in 1917, following its consecration on 28 May by the Bishop of Salisbury, the Right Rev. Frederick Ridgeway. The church cost £13,000 to build. With its completion, the rites and powers of St George's was transferred to All Saints, but as the new parish church did not have its own burial ground, St George's was retained for burial services.

Reporting on All Saints' in May 1917, the Western Gazette noted: "Many have been the sad anxieties and disappointments, owing to the dislocation caused by the war, but obstacles are made to be overcome, and the Rector has shown this in no small way." Shortly after the church's consecration, the newspaper also commented: "Many and anxious have been the meetings and consultations, and doubts and fears have arisen time and again as to the practicability of carrying out the project, but each time the decision has been to persevere."

In 2019, All Saints' was added to Historic England's "Heritage at Risk" register over the "poor condition" of its window stonework.

Design
All Saints' is primarily built of Portland stone in the Early English and Perpendicular styles. Designed with a capacity of 600 sittings, it is made up of a four-bay nave, north and south aisles, chancel, Lady chapel, clergy vestry, choir vestry and north-west porch. A small bellcote is located on the western gable. The intended south-west tower, never built, was designed to include buttresses and an octagonal stair turret at the south-west corner, with buttresses and pinnacles on top. On the chancel roof is a hand-painted panel forming the 12 signs of the Zodiac.

Many of the furnishings and fittings are original and were gifted to the church. The oak pews, choir stalls and clergy desks were carved by Mr. Micklewright of Norton-sub-Hamdon, near Yeovil, with the latter two being the gift of Mrs. Head. Canon Gildea of Upwey carved and gifted the Holy table and reredos. The oak pulpit was gifted by Mr. and Mrs. H. Sansom, and the font, with carved oak cover, provided by Mr. and Mrs. H. J. Sansom. The chancel carpet and altar kneelers were donated by Mrs. Buller of Shilton, Oxon. The church's organ was built in 1929 by William Hill & Son & Norman & Beard Ltd. to the specification of Dr. Walter Galpin Alcock, the organist of Salisbury Cathedral.

The church contains a number of memorials. The seven windows of the south chapel were created by Messrs. Clayton and Bell of London and installed at All Saints' in memory of Rev. Beazor. They were dedicated on 1 November 1919. Following Rev. Beazor's death in 1909, a monument was erected at his grave some months later, but funds were also subscribed by local residents and others for a memorial to be placed in the future parish church. In addition to the money raised by subscription, £40 was also later gifted by the All Saints' Ladies' Guild. The east window is a memorial to the men of the parish who lost their lives in World War I. A memorial tablet to Rev. Griggs, who died in 1934, is located on the north wall of the chancel.

In 1917, the Western Gazette commented on the church: "The whole effect is one of beauty and dignity, and the result is a noble church." In the 1972 book The Buildings of England: Dorset, authors John Newman and Nikolaus Pevsner described it as a "large and prosperous-looking church". Historic England, in their listing entry for the building, commented on the "very confident design and "meticulous detailing". In a 1950s guide to the island by the Portland Urban District Council, the church was described as "undoubtedly the finest building on the island", with the "beautifully carved" work of Mr. Micklewright "rank[ing] among the finest twentieth-century carving in the country". Historic England, in 2019, noted the church's "strong design of single phase with meticulous detailing".

Church hall
A church hall was built during the second half of the 1950s. Fundraising began around 1952 and had reached £2,000 by 1955. The hall was later demolished in the late 1990s and replaced with New Church Close, a development of seven houses. A new hall for All Saints' was then built in the early 2000s, attached to the southern side of the church. 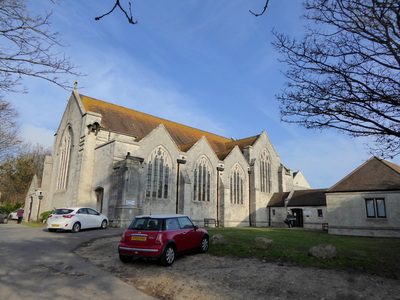 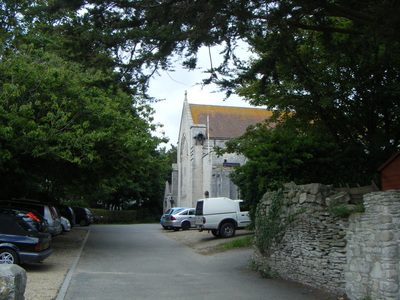 The church as seen from the entrance. 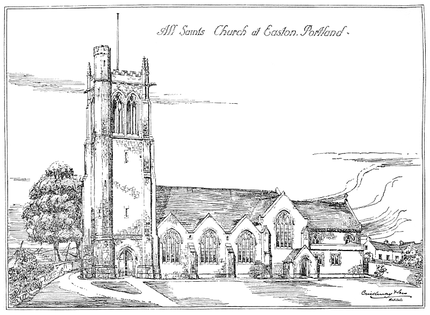 All Saints' Church as envisioned by the architects Crickmay & Sons, showing the intended tower that was never built. This drawing is held in the collection of Lambeth Palace Library and has been reproduced with permission. (Ref No: ICBS11229b)