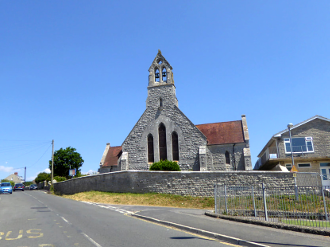 The Avalanche Memorial Church, also known as St Andrew's Church, is a Church of England church of late 19th century origin in Southwell. It was built in 1878-79 and remains active to date as part of the Portland Parish, which also includes St John's and All Saints'. The church (including its boundary wall) has been a Grade II listed building since September 1978.

History
The collision of the SS Avalanche and SS Forest in 1877
St Andrew's was built as a memorial church to the SS Avalanche of the Shaw Savill Line (London) which collided with the SS Forest of Windsor, Nova Scotia, fifteen miles off Portland Bill during stormy conditions at 9:15pm on 11 September 1877. The Avalanche, a three-masted iron clipper, was taking 63 passengers (men, women and children) to their homes in New Zealand, namely Wanganui. The ship had a crew of 31, while the Forest, a wooden vessel, had a crew of 21 and no passengers.

A Lloyd's telegram reported of the tragedy: "The Forest struck the Avalanche between the main and mizzen masts, nearly cutting her in two, and causing her to sink in three minutes, before there was time to launch the boats. The second and third mates and some of the crew got on board the Forest, but that vessel was so much damaged that she foundered in a quarter of an hour." Another report stated: "The night was so dark that it was almost impossible to discern the mass of human beings who were struggling for life in the water below, but the survivors say they shall never forget the scene. The cries of men, women, and children for aid were heartrending. The sea was literally alive with human beings, whose cries for help were heard without the crew on board of the Forest being able to render aid."

Three boats were able to be launched from the Forest before it was abandoned. At 6am the following morning, a local fisherman at Chesil Cove discovered a capsized boat and a body washed ashore. After seeking assistance, a group of local fishermen then discovered a further five bodies. Two hours later, a boat containing twelve survivors was spotted attempting to reach the shore. Despite stormy conditions still prevailing, two lerrets, each containing seven fishermen, were able to reach the survivors, approximately two miles out to sea, and bring them ashore, along with another body found drifting off the coast. The three survivors from the Avalanche were the third officer John C. Sherrington, and two able seamen, Thomas G. Mills and J. P. McCarthy. The remaining nine were from the Forest and included Captain E. Lockhart.

As a result of the tragedy, over one hundred people, including whole families, perished. The fishermen were soon awarded with testimonials for their bravery, after Rev. J. A. Beazor, the Rector of Portland, made an appeal in the Standard newspaper, allowing many subscriptions to be collected. The Southern Times reported on 22 September 1877: "The brave conduct of the Portland fishermen has been the theme of conservation in many English homes during the past week. The Mayor of Weymouth has received letters from ladies and gentlemen speaking in high terms of the courageous conduct of those noble men." The testimonials were presented to the fishermen in October at a ceremony held at St John's School in Fortuneswell. A total of £135. 2s. 8d. had been raised to produce the testimonials, with the remainder distributed equally among the twelve men, while each rescuer also received £5 each from the Board of Trade "in recognition of their gallant conduct".

Plans for and construction of a new church
Prior to the tragedy of the Avalanche and Forest, Rev. Beazor announced his wish to establish a mission church and schoolroom to serve the residents of Southwell and Weston in 1873. He felt that the parish church of St George's and the nearby educational establishments were a "considerable distance" for the residents of the two villages, and believed "the inhabitants have in consequence experienced great inconvenience in securing themselves and their children religious and educational advantages."

Rev. Beazor launched an appeal for subscriptions towards the proposed church in early 1874. By this time, he had identified a site on the edge of Southwell, which could be acquired at a "reasonable price", while plans for a church accommodating up to 200 people had been drawn up by the local architect George R. Crickmay. It was intended that the church's nave would double as a schoolroom.

When only a few supporters came forward to contribute towards the estimated £1,000 required, further appeals were made later in the year. The Southern Times commented in November 1874: "Up to the present time but few of our local merchants and tradesmen have subscribed towards the proposed mission church at Southwell. This is deeply to be regretted, for the church and schoolroom are much needed. It is sincerely to be hoped all kind-hearted persons who are anxious for the spread of education and Christian principles may be induced to give assistance in this excellent work, that the erection of the proposed building may commence at the beginning of the new year." £210 had been promised by December 1874, but the limited number of further subscriptions prevented the church's construction. The Southern Times reported in November 1875 that "as soon as the money is forthcoming the proposed mission church at Southwell will be erected", and fundraising continued into 1877.

With the disaster of the Avalanche and Forest in September 1877, relatives and friends of those who died in the tragedy expressed their wish for a memorial to be erected on Portland. In light of this request, Rev. Beazor suggested donations be put towards a memorial church, which would also serve as the intended mission church for Southwell and Weston. His suggestion quickly gained the support of the relatives and friends, as well as local residents and the Bishop of Salisbury, the Right Rev. George Moberly. In addition to the donations received from New Zealand, Rev. Beazor made further appeals for subscriptions from the public, while George Crickmay finalised designs for the church.

A grant of £150 was received from the Salisbury Diocesan Church Building Association in January 1878 and tenders for the church's construction were sought shortly after. By March 1878, an estimated £300 to £400 was still required to meet the cost of purchasing the land and constructing the church. The Weymouth, Portland, and Dorchester Telegram reported on the scheme in March 1878, "Skilfully connecting his idea [for a mission church] with that of a memorial church which should overlook as far as possible the waters on which happened the Great Collision, Rev. J. A. Beazor has appropriately named the proposed church the 'Avalanche Memorial,' and, as it will be built as near to the spot where the ill-fated Avalanche went down, as an eligible piece of land could be found, it will be a most fitting memorial of that sad event. At the same time the situation of the church will relieve many of the poor folks of Southwell [and Weston] from a long walk to the parish church at Reforne."

The first stone of the church was laid by Mrs Beazor on the morning of 13 June 1878. Construction of the church was carried out by builders Messrs. Lynham and Bayliss of Portland under the supervision of Mr. Crickmay. In November 1878, the Weymouth, Portland, and Dorchester Telegram reported that the church's walls had proceeded above the front and side windows, and the chancel arch was in place. They reported, "There is sufficient to see that it will be a pretty little church, and although there is not a great deal of carving, the plain stone work is very good."

Rev. Beavor placed the top stone on the church to mark its completion in June 1879, and the church was consecrated and dedicated to Saint Andrew by the Bishop of Salisbury on 3 July. The total cost of the church was approximately £1,900, £200 of which remained to be raised at the time of its consecration. An organ was installed in the church in 1880 and opened on 6 July. It was built by Allen and Co of Bristol and cost £115.

Preparations for the church's centenary year began in 1975. The descendants of the casualties, along with those of the Portland fishermen, were invited to the event. A number of photographs were obtained for the church, while an inmate of HM Prison The Verne donated a scale model of the Avalanche. During the event in 1979, the descendants of the Portland fishermen presented a stone tablet to the church.

Content
The church contains a range of memorials to those who lost their lives in the tragedy, along with testimonials to the bravery of the local fishermen. A brass tablet lists the names and, where known, the descriptions of the passengers and crew of the Avalanche, while stained glass windows also display scenes from the tragedy. The window of the south side nave, by the chancel arch, was created by Jon Callan of Southwell in 1981. An artist's impression of the two Portland lerrets landing on Chesil Cove after the rescue of the survivors is on display, along with a framed copy of the testimonial presented to William Flann.

Many artefacts have been recovered from the Avalanche and some are displayed in the church's porch. The most notable recovery is the large anchor of the Avalanche, which has been placed in the church grounds. Divers located it in 1984 and, after seeking permission, raised and donated it to the church.

Design
St Andrew's is built of Portland stone in the Early English style, with a two-bell turret and a red clay tile roof. Designed to accommodate approximately 200 people, with all seats free and unappropriated, the church is made up of a four-bay nave, chancel, vestry (formerly the baptistry) and north porch. The roof of the nave is open timbered and the shafts of the vestry are of Devonshire marble. The chancel was paved with encaustic tiles from Maw & Co of Jackfield.

The stained glass inside the church all dates from the 19th century except the centenary glass created by Jon Callan. The windows in the vestry and northern side of the chancel were made by Mr. Gibbs of Tamworth, and the church's east and west windows by Messrs. Lavers, Barraud and Westlake of London. Both the font and pulpit were created to the designs of Crickmay. The font was the work of Messrs. Lynham and Bayliss, while the pulpit was carved by Mr. Grassby of Dorchester.

The Dorset County Chronicle described the church in 1879 as a "commodious and chaste church", displaying a "happy adaption of the Early English style, which, by its elegant simplicity, is admirably suited to its purpose, being monumental in character, unexpensive in cost, and well suited to the stone of the island, which, it is needless to say, is unsurpassed." 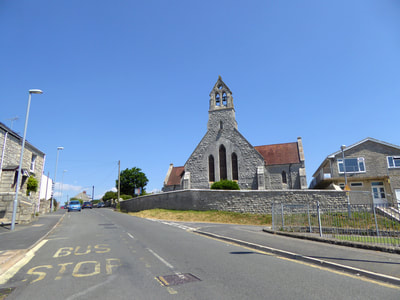 The Avalanche Memorial Church at Southwell. 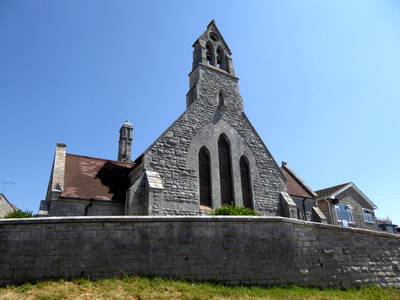 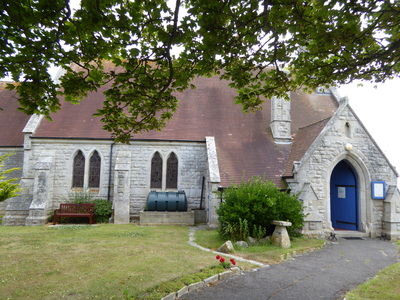 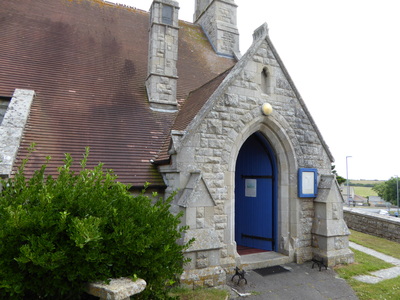 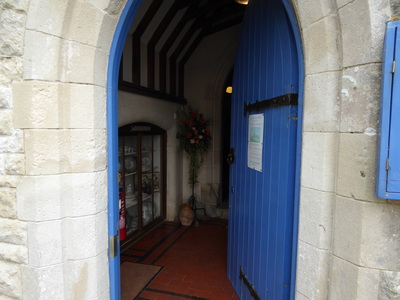 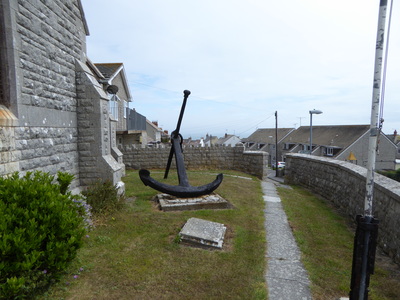 Around the side of the church is the anchor of the Avalanche was recovered in 1984, and donated to the church. 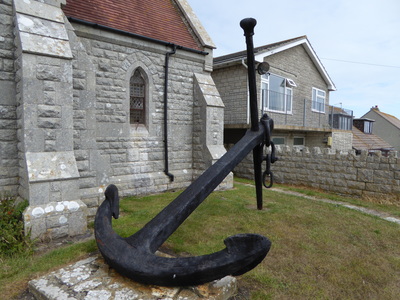 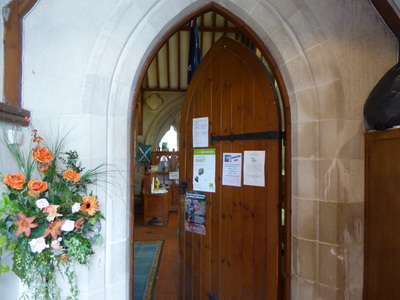 The inner porch door leading into the church. 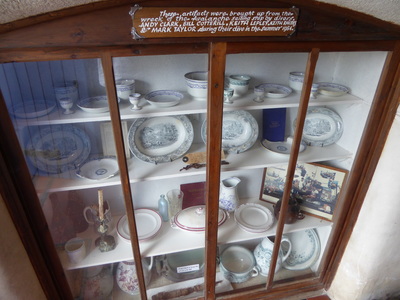 Inside the porch are various artefacts recovered from the Avalanche in 1984. 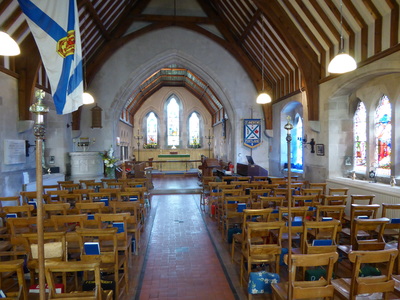 The nave and chancel of the church, with seating for approximately 100 people. 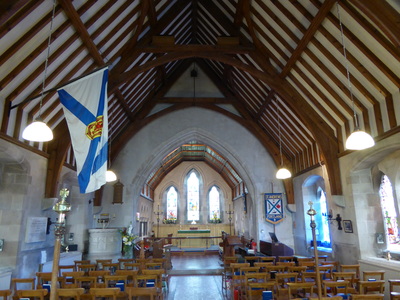 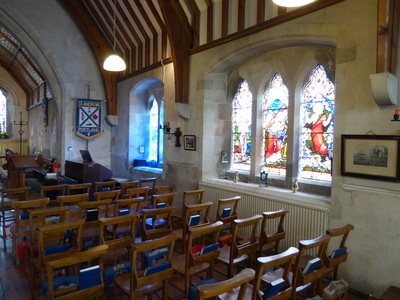 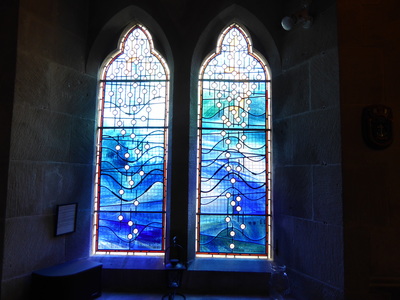 This window features centenary glass by Jon Callan of Southwell from 1981. 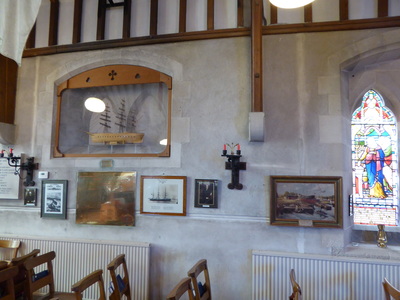 On the opposite side of the church are more interesting features. 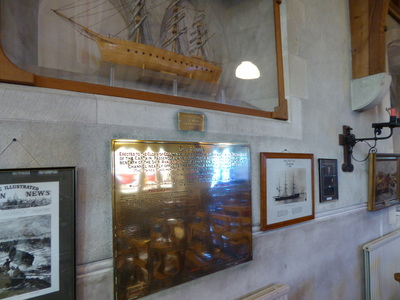 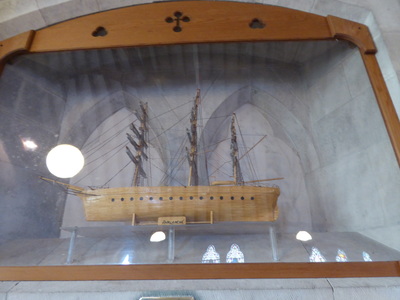 For the church's centenary in 1979, an inmate of HM Prison The Verne donated a scale model of the Avalanche. 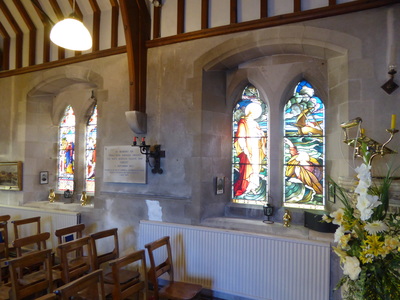 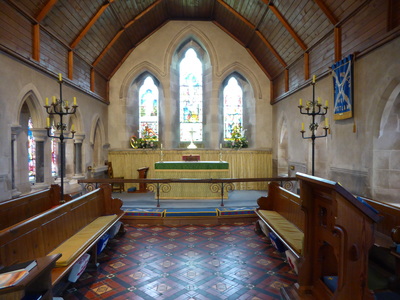 The chancel and altar. 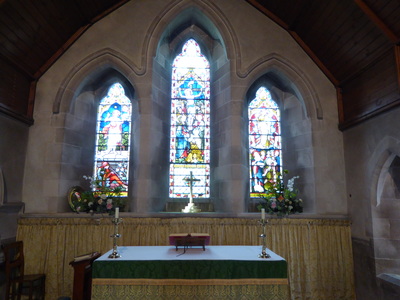 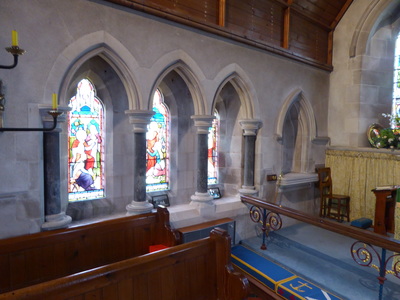 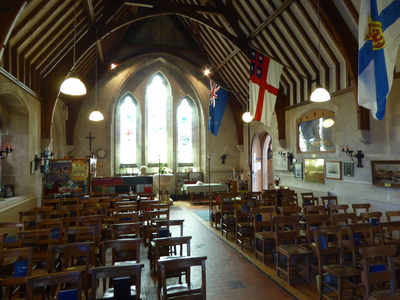 The nave from the chancel. 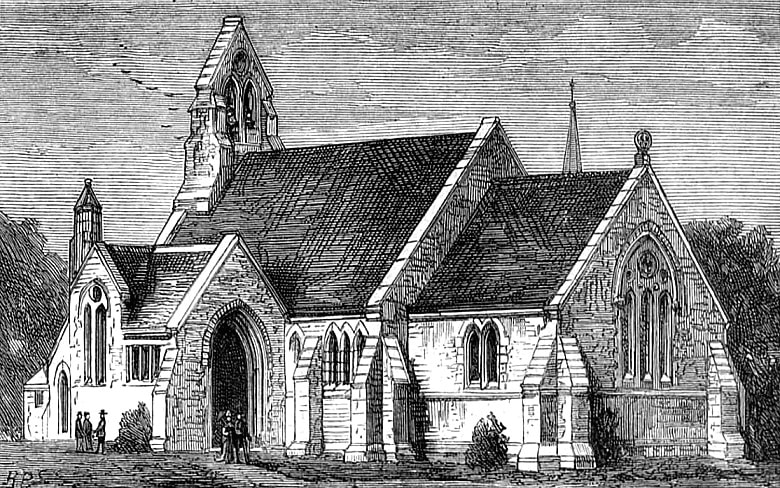 An early impression of the church by G. R. Crickmay, which appeared in The Graphic in December 1877. 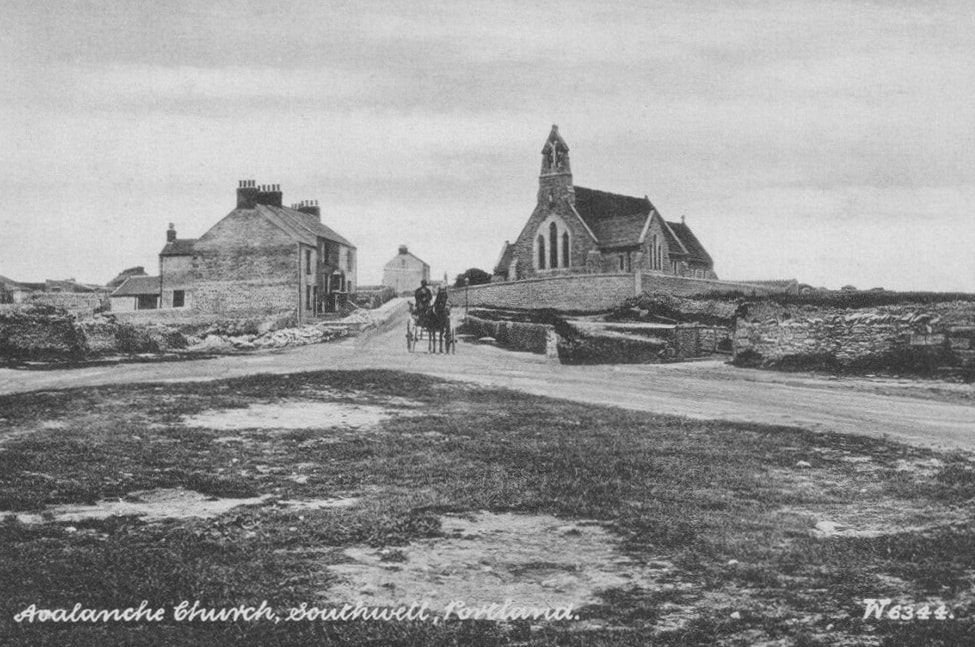 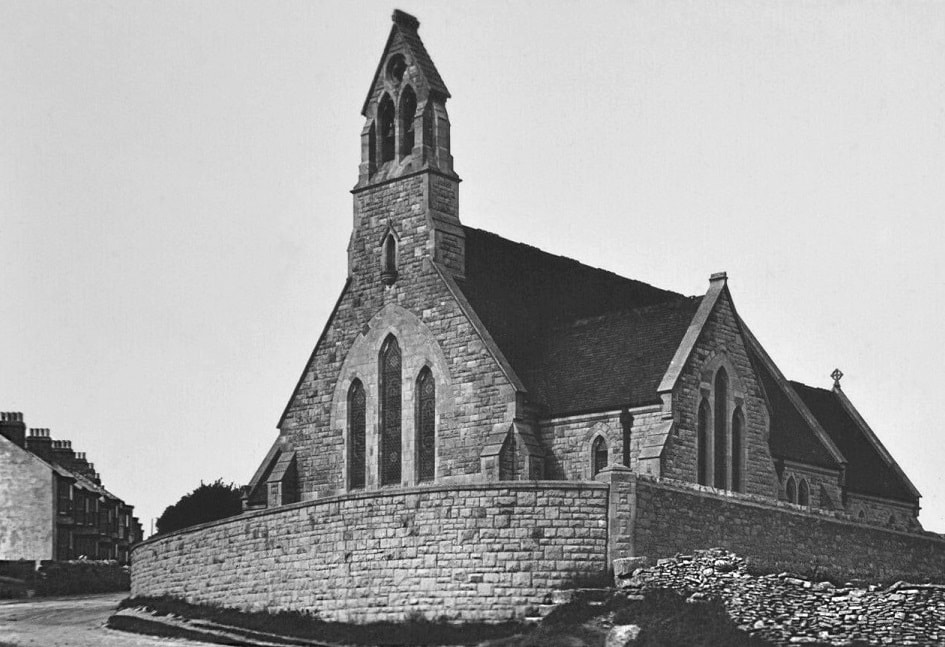 An early 20th century postcard of the church by Edwin Seward of Weymouth.