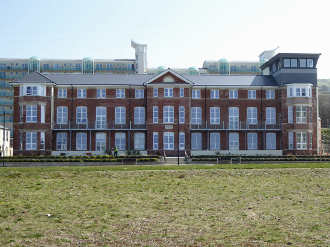 Beresford House is a residential complex in the northern region of Underhill, on the edge of Castletown and overlooking Osprey Quay. It was built for the Admiralty in 1904-06 as a canteen to serve sailors and other Royal Navy personnel at Portland.

With the establishment of RNAS Portland (HMS Osprey) in 1958-59, the canteen was converted into the station's air administration building (or headquarters), containing workshops, offices and a control room. It served this role until the station's closure in 1999.

The building remained derelict until 2017, when work began on its redevelopment into residential units as part of the development project Castle Court. The building, which has been named Beresford House, has been designated an Important Local Building in recent years.

History
Establishment of and use as a naval canteen (1903-1959)
Portland's naval canteen was established at a time when Portland was becoming increasingly important to the Royal Navy. Since the creation of a harbour of refuge and coaling depot in the mid-19th century, Portland had become a major naval station. A canteen to serve sailors and other personnel of the Royal Navy was approved in 1903, with the building to be constructed at a cost of £10,000. Construction commenced in 1904 under a joint contract between Messrs Jesty and Baker (who handled the foundations and work up to ground level) and Messrs J. and H. Bagg of Weymouth. The work was completed in 1906 and the canteen opened for trade on 1 July.

Overlooking the tidal area known as the Mere, the three-storey canteen was built of red brick, with band courses of Portland stone. The original managing body for the canteen, on behalf of the Admiralty, was Messrs Richard Dickeson and Co. Ltd, who were awarded the contract in June 1906. Upon its opening, the Southern Times considered the canteen as "a great advance in the history of Portland as a naval station". The Hampshire Telegraph described it as a "fine building", adding "the facilities provided for recreation compare favourably with any institution of a similar kind at any of our naval ports."

The new facilities at Portland's canteen quickly proved popular. Prior to its opening, most sailors paid to be conveyed to Weymouth for shore leave by the steamers of Cosens & Co Ltd. From August 1906, sailors had the additional option of being landed at Portland in their own ships' boats without charge. The Western Morning News reported in September 1906 how the canteen's business (and other establishments on the island) was "greatly augmented" by this allowance. The canteen's sleeping accommodation was filled to capacity each night and it was considered an additional 200 beds would be needed to meet demand.

In 1908, the creation of a new recreation ground in front of the canteen was completed and officially opened on 3 September by Admiral Lord Charles Beresford. Prior to its creation, the only recreation ground for the Royal Navy was located between Victoria Square and Castle Road. Plans for the new ground were made around the same time as the canteen, but work did not begin until late 1905. The work involved reclaiming part of the Mere, which was infilled by Messrs Jesty and Baker using ashes collected from battleships and cruisers berthed in the harbour. A small jetty to the west of Portland Castle was built to land the ashes.

The canteen continued to serve the Royal Navy at Portland throughout the first half of the 20th century. In 1917, the Navy and Army Canteen Board became the managing body of the facility, and they were succeeded by the Navy, Army and Air Force Institutes (NAAFI) in 1921.

Conversion into and use as headquarters of RNAS Portland (1959-1999)
Following World War II, the success of the Admiralty's trials with helicopters resulted in the establishment of a small airfield at Portland. The chosen location was the Mere and work commenced in 1958, which included the conversion of the canteen into the station's administration building. It contained a variety of facilities, including offices, workshops, machine shops, briefing and lecture rooms, a galley, sick bay and crew room. The building also went on to house the station's air traffic control facilities, after initially being set up on the edge of the landing strip as a temporary arrangement. Two blister hangars, a runway and landing area were established to the north of the building, which saw the recreation ground being taken over and some further infilling of the Mere.

Commissioned as RNAS Portland (HMS Osprey) in 1959, the station's activities revolved around the use of helicopters in an anti-submarine role, and particularly the training of their crews and associated personnel. With major expansion during the 1960s and 1970s, the station became one of the Royal Navy's most important, home to various squadrons with helicopter operations taking place 24 hours a day. The role of Air Traffic Control was made all the more vital due to Portland having the shortest runway of any military airfield in the UK.

The administration building remained home to various departments and operations over the course of its use by the station. An attached extension was added to the west of the building around 1964 and contained additional office space, including for the captain, and a conference room. A meteorological office was established within the main building in 1969. The Royal Naval School of Helicopter Control arrived at Portland in 1972, following a transfer from HMS Dryad, and initially classrooms were located at 772 Squadron's car park, while the trainer was a caravan placed behind the headquarters. After a number of location changes, the school was finally established on the top floor of the building. When Helicopter Control became the Aircraft Control branch in 1988, a new simulator was placed behind the headquarters. For many years, the ATC tower operated an AR1 radar, which was removed in 1988.

With the dissolution of the Soviet Union and end of the Cold War in 1991, a reduction of the UK's defence budget saw HM Naval Base Portland closed in 1996 as part of cost-saving measures. Meanwhile, consultation over the future of RNAS Portland was held in 1994, and the following year saw the announcement that RNAS Portland would close in 1999, with its operations to be moved to RNAS Yeovilton. To celebrate forty-years of ATC service at the station, a closure and reunion party was held in the administration building in February that year. With the station's closure, it remained vacant and soon fell into a state of dereliction.

Redevelopment plans and conversion into Beresford House (1999-2019)
After the closure of RNAS Portland, the Ministry of Defence sold the site to the South West Regional Development Agency (SWRDA). Renamed Osprey Quay, a regeneration project was commissioned in 2001. Over the next decade, the area was transformed, largely for recreational and industrial purposes. Both Weymouth and Portland National Sailing Academy and Portland Marina was established at Osprey Quay, along with extensive industrial space, but despite plans for its redevelopment, the former headquarters remained derelict and became a target of vandalism.

In 2007, it was announced that the SWRDA had signed a deal with Sutton Harbour Group to construct Castle Court, a £30 million tourist and leisure complex, which was set to include a hotel, apartments, public areas, a restaurant, shops and other employment space. As part of the scheme, the former headquarters was to be transformed into residential units. However, with the exception of the Royal Yachting Association's Portland House, the development did not come to fruition and Sutton Harbour pulled out of the project. After the SWRDA was abolished in 2012, the building was put under the ownership of the government's Homes and Communities Agency (HCA), who attempted to attract another developer to take on the scheme.

In 2014, HCA announced their plans of a revised £12 million scheme for Castle Court, with a focus on housing (up to 70 residential units) in the effort to generate new developer interest. The agency commissioned AHR Architects Ltd and Jones Lang LaSalle to seek planning permission for the new scheme, and approval was gained in 2015. HCA had publicly claimed that the "valuable heritage building" could only be saved if additional land was provided for housing development. The developer ZeroC Holdings Ltd. commenced work on the building's conversion into 22 residential apartments in 2017, with an additional 46 residential units erected on vacant land, largely to the south-west. In 2018, the building was named Beresford House. In 2019, the restoration and conversion of the building was awarded a certificate of merit by the Weymouth Civic Society. They described it as a "fine restoration and conversion, ensuring the preservation of this important building without compromising its external appearance." 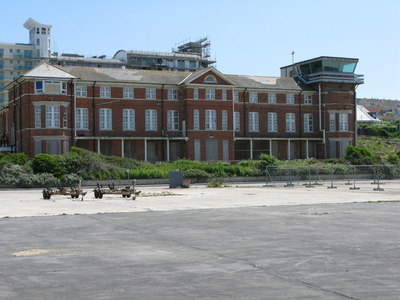 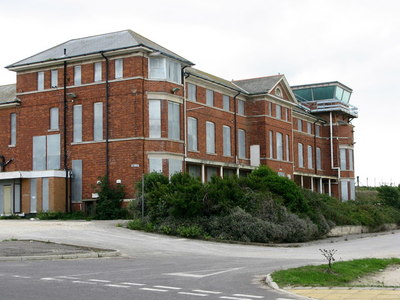 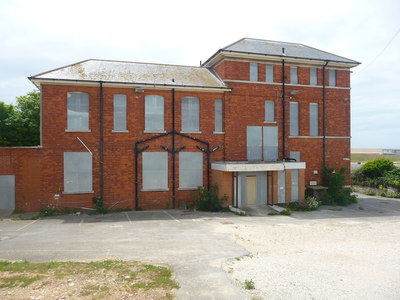 The eastern side of the building, with the main entrance, seen in June 2011. (© Copyright Chris Talbot, licensed under Creative Commons BY-SA 2.0). 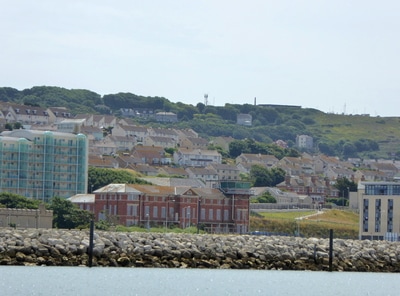 The building as seen from Portland Marina. 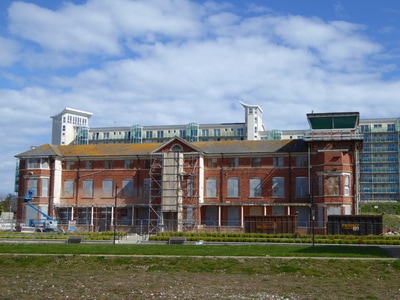 The front of the building seen in April 2017, soon after redevelopment work began. 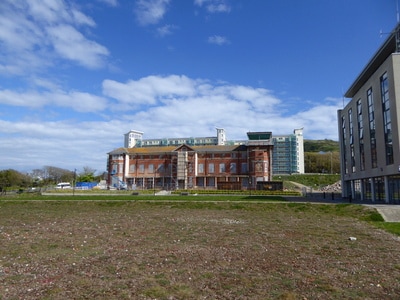 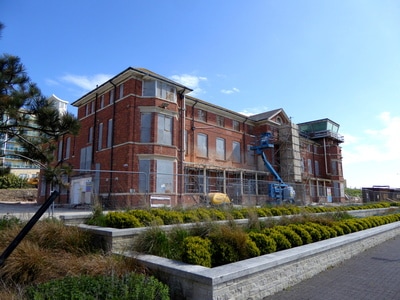 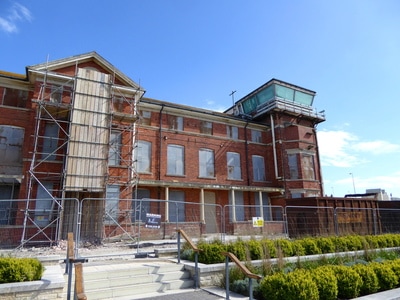 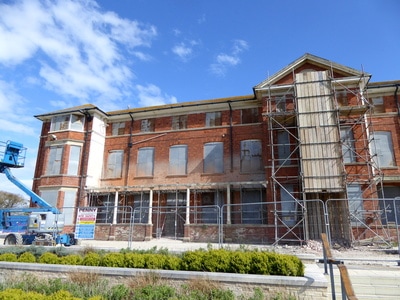 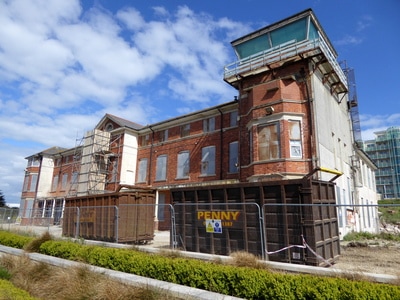 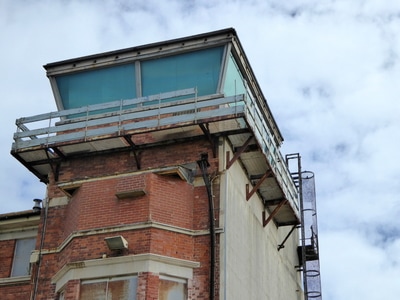 The ATC tower addition to the original building. 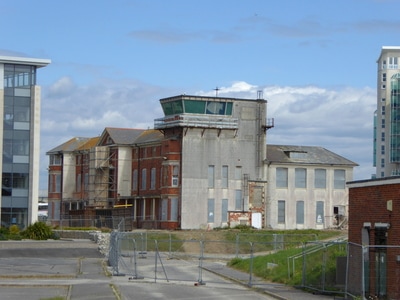 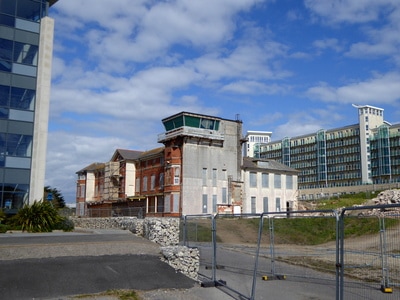 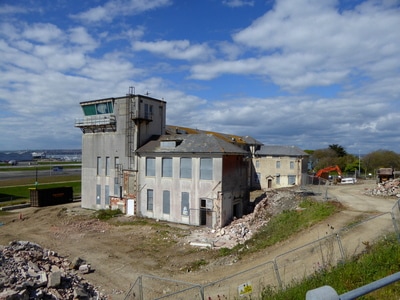 The western side of the building as seen from Castle Road. 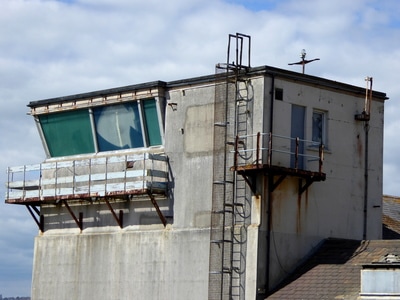 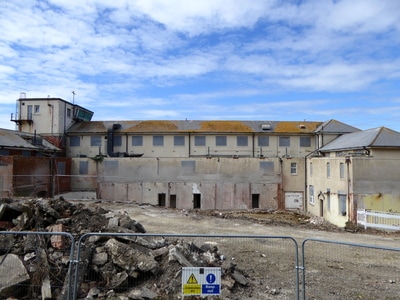 The rear side of the building. 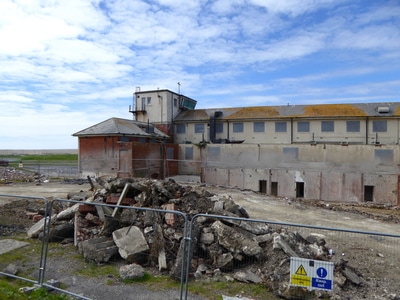 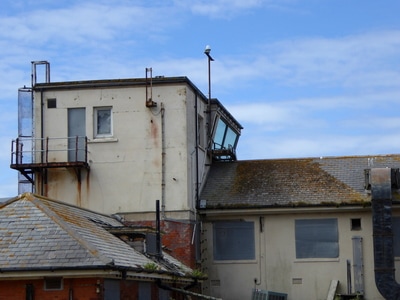 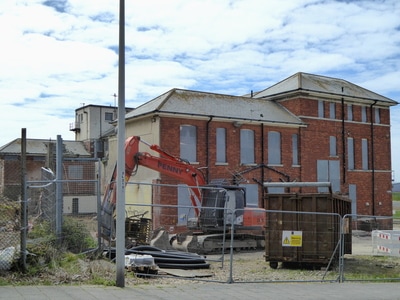 The eastern side of the building. 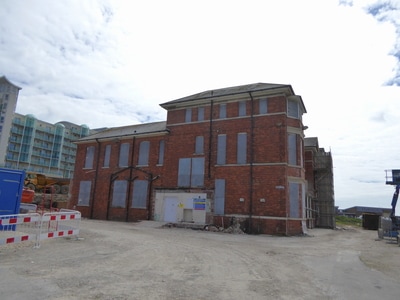 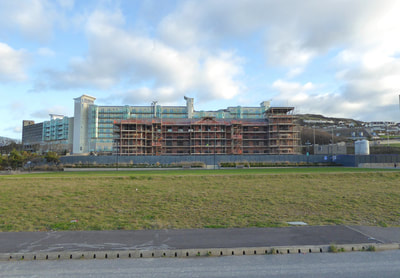 This November 2017 photograph shows the development work continue, with the building now stripped out. 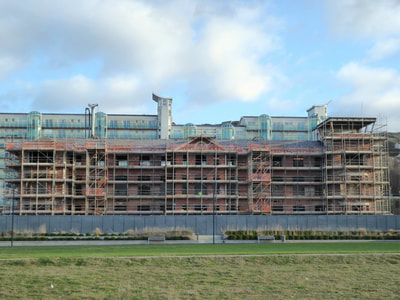 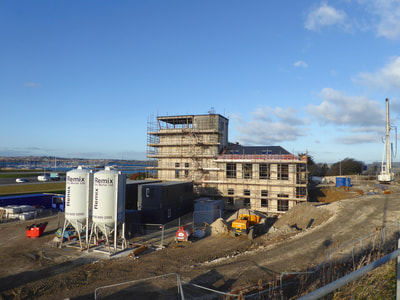 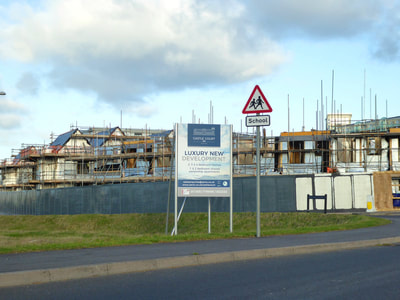 The redevelopment is part of the Castle Court development. 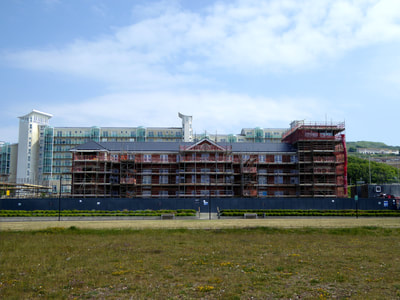 The development's progress by May 2018. 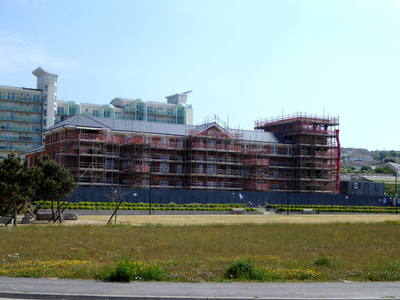 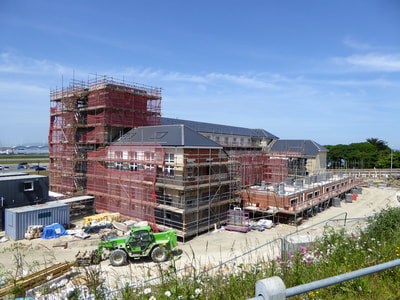 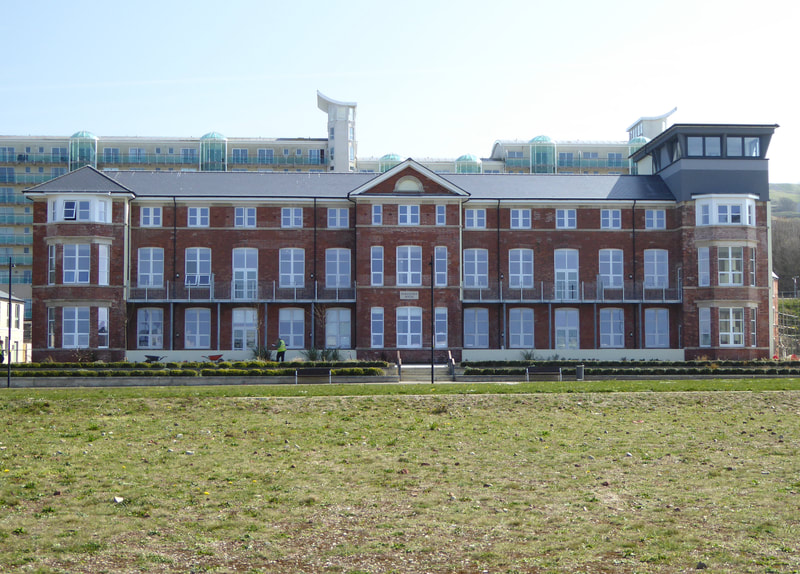 Beresford House at the beginning of April 2019. 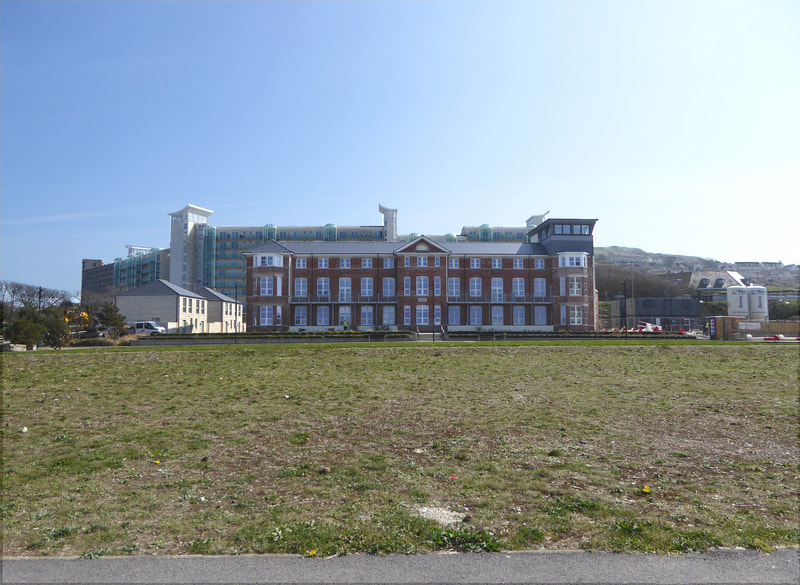