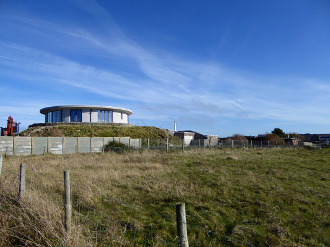 Blacknor Battery, also known as Blacknor Fort, is a former battery of early 20th century origin at Blacknor Point, on the west side of the island and west of Weston. Constructed in 1900-02, the battery was one of a number of fortifications built to defend Portland Harbour and its naval station. Following its decommissioning in 1956, the battery became privately owned and is now split between two residences.

History
Construction of Blacknor Battery and World War I (1900-1918)
The first proposal for defensive works to be established at Blacknor Point was made in 1846, when Major-General Cardew produced a report of recommended defences for the new harbour of refuge at Portland, which was formed with the construction of two breakwater arms in 1849-72. In addition to the Verne Citadel, Cardew proposed a number of batteries including one to be placed at Blacknor Point on the western side of the island and another at Dirdale Point on the eastern side. Although these two batteries did not come to fruition, the establishment of a defensive work at Blacknor Point was considered again later in the century.

Blacknor Battery was constructed as one of the later coastal defences for Portland Harbour, alongside Upton Battery near Weymouth. By the late 19th century, Portland Harbour had become firmly established as a Royal Navy station, which continued to rise in importance into the following century. As the end of the 19th century neared, rapid advances in naval warfare and technology, particularly of the torpedo, led to concerns over the harbour's vulnerability. Proposals were made for a further two breakwater arms to fully enclose the harbour and these were constructed between 1895 and 1905. Meanwhile, the existing fortifications for the harbour underwent modernisation and new defences, including Upton and Blacknor, were approved.

Work on Blacknor Battery commenced in July 1900 and was completed in February 1902. Construction was carried out by local builders Messrs Jesty and Baker for a cost of £6,296. The battery's commanding clifftop location, overlooking Lyme Bay, allowed it to defend the western approaches to Portland. The battery was constructed with two gun emplacements and their associated magazines, along with a battery command post, a caretakers' quarter, stores and toilets. The original armament was two 6-inch BL guns. In 1905-06, a war shelter was added to the battery for a cost of £1,391 and included ablutions and a cookhouse. The structure was mounded with earth to provide protection.

In 1908-09, the battery's two 6-inch BL guns and their emplacements were replaced to accommodate 9.2-inch BL Mk. X guns, with the work being carried out by Messrs W. Hill and Company of Gosport. The mountings for the new guns arrived at Portland in May 1908 on board the government-owned store vessel Lord Wolseley and the guns themselves arrived in February 1909. Speaking of the modification work, the Southern Times commented in May 1908: "Blacknor will be a fort which the boldest enemy will hesitate before attacking from the sea side." Blacknor's two 6-inch guns were transferred to the Breakwater Fort in 1908 and installed on its roof in 1909.

During World War I, the battery received additional armament, consisting of two 15 pounder BL guns, one 5-inch BL gun and three Bren guns. The 15 pounder guns were installed on two emplacements in 1914, which were sited on the cliff edge, one on each side of the battery. They were added to provide additional protection for Whitehead's Torpedo Works at Wyke Regis and the Royal Navy's Mere Oil Fuel Depot.

Experimental use (1930s)
Aside from being used by the Army for regular firing practice, Blacknor Battery became a rocket test facility during the 1930s, which saw it used for experiments with anti-aircraft rockets, catapults, gliders and coloured searchlights. The experiments with AA rockets were largely conducted between 1937-39 by the Explosives Research Department of the Royal Arsenal, Woolwich, using 3-inch tubular charges produced by the Royal Naval Cordite Factory at Holton Heath. Gun-laying predictors were used to monitor the fall of shot in a series of successful trials. The experiments were discontinued briefly in 1938, but resumed again prior to the outbreak of World War II. As Blacknor Battery was required as a coastal defence during the war, the trials were soon relocated to Aberporth in Wales, leaving the battery under full control of the Army.

World War II (1939-1945)
During World War II, the battery was manned by 103 Battery of 522 Coast Regiment. Early in the conflict, breeze block blast walls were installed within the battery, while two light AA Bren guns were added as supplement defence, one each side of the main gun emplacements. A new battery observation post was built of concrete on the cliff-edge during 1940-41, south of the battery, and was installed with a PF and DRF Mk II. The two small emplacements from World War I were also brought back into use to accommodate Lewis guns, although these were removed in 1942. One of the Lewis guns finished off a Dornier DO 17 bomber during the Battle of Britain on 17 July 1940.

During the Battle of Britain, a German Junkers Ju.88 crashed alongside the battery on 11 August 1940. Although the plane was set to make a perfect landing, it snagged the battery's telephone wires, which in turn retracted the undercarriage. The plane landed intact and no fatalities occurred among the four crew members, although the pilot suffered more severe injuries than the others. Later in 1943, the battery claimed a successful hit on a German E-Boat operating in Lyme Bay.

On the night of 27 April 1944, the battery witnessed the Slapton Sands Massacre of Exercise Tiger. The exercise, a large-scale rehearsal for the D-Day invasion of Normandy, resulted in tragedy when the participating American soldiers were attacked by German E-Boats. Most of the 700 casualties drowned and many of the bodies recovered were taken to the pier at Castletown. As witnesses to the event, the gunners at Blacknor Battery were authorised to open fire, but this was soon withdrawn over the fear of causing fatalities from friendly fire.

Post war decommissioning and aftermath (1945-)
Blacknor Battery was disarmed in 1954, with the BL guns removed between that April-June for salvage, leaving the site to be primarily used for storage. As with other batteries and military defence installations of its type across the UK, Blacknor was abandoned as a coastal defence in 1956. It was sold that year and the officer's mess was subsequently converted into a bungalow, while some garages, outbuildings and a riding stable were added to the site. Later, two separate properties were formed at the battery, the Stables and the Cottage.

Land Dispute (2004)
In 2004, a land dispute between the two owners of the adjacent bungalows at the battery made national news. According to the BBC, Edwin Hoskins and Graham Vranch became neighbours in the 1970s. In 1978, the pair drew up a legal agreement which stated that if either of them decided to sell their property and land, the other would be given first refusal for one month. When Hoskins decided to sell in January 2004, Vranch made an offer to buy his property for £55,000, which was a sum far lower than Hoskins expected. On 22 February, Hoskins invited Vranch to his house and shot him with a gun. Vranch survived the shooting and Hoskins was imprisoned in July 2004 at Salisbury Crown Court. In 2006, Hoskins, serving his seven-year sentence at HMP Guys Marsh in Dorset, was found dead in his cell, having hanged himself from the window bars.

Use of gun emplacement for construction of a new house (2008-2011)
In 2008, the Cottage bungalow, including the southernmost gun emplacement, was sold for £250,000 to Paul and Debbie Care, who soon submitted a planning application to erect a new residence on top of the emplacement. Planning permission was approved in September 2008. The project quickly gained the interest of Channel 4's Grand Designs and although filming took place at the end of the year, the programme decided to withdraw when construction came to a halt due to "design delays".

Amended plans were submitted in December 2009 and approved the following March. The house was completed in April 2011, although the surrounding land was not landscaped and remained unfinished. While the gun emplacement became part of the new dwelling, the attached magazines and other features were left untouched, and the existing bungalow was retained as an annexe. The family put the property up for sale in late 2013 for almost £1 million and a series of price reductions followed from £850,000 and £750,000 in 2014 to £395,000 in 2016. In 2014, the property made an appearance on the BBC house-hunting TV show Escape to the Country.

Access
Although Blacknor Battery remains private property, it can be seen from surrounding public footpaths. The battery observation post from World War II and the two gun emplacements from World War I all remain accessible to the public and are located alongside the route of the South West Coastal Path. The interior of the BOP remains accessible, although it has suffered from weathering and vandalism, and part of its roof collapsed in mid-2014. 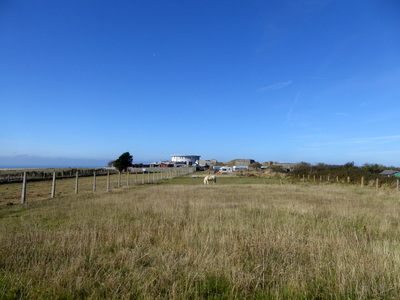 Blacknor Battery sits at a commanding position overlooking Chesil Beach and across Lyme Bay. This photograph shows the battery from inland. 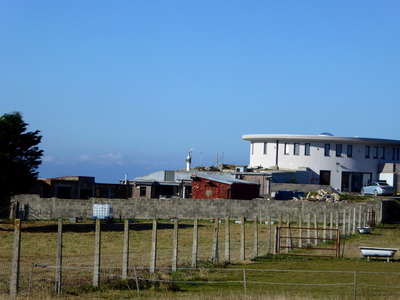 A closer look at the battery from this position. The modern residence, which was placed on top of one of the gun emplacements, can be clearly seen. 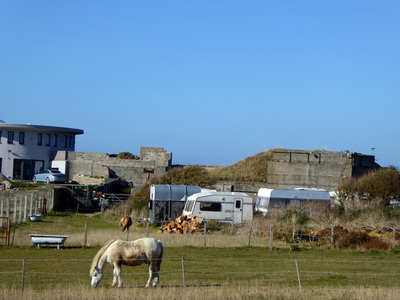 The surviving emplacement is situated next to the recent construction. 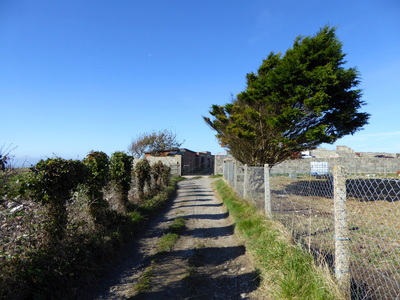 This pathway leads to the entrance of the battery. 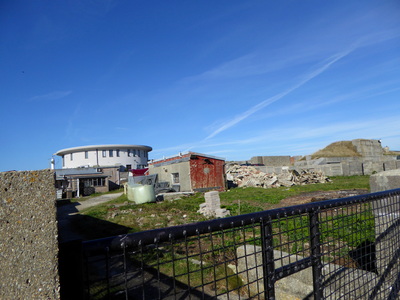 The battery as seen from along the coastal path on the western cliffs of Portland. 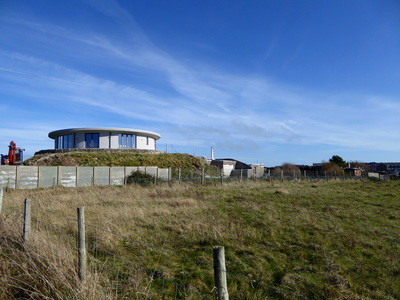 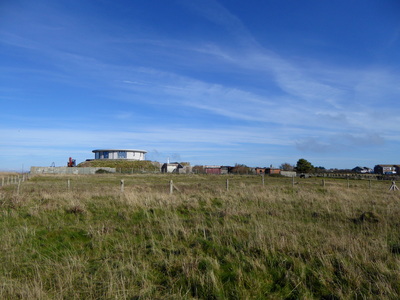 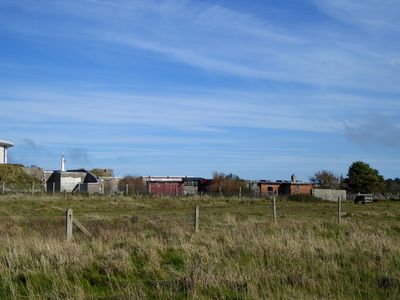 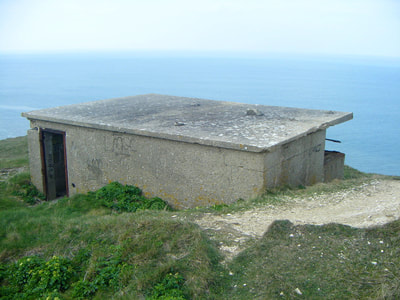 Near to the battery is the later battery observation post, built during World War II. 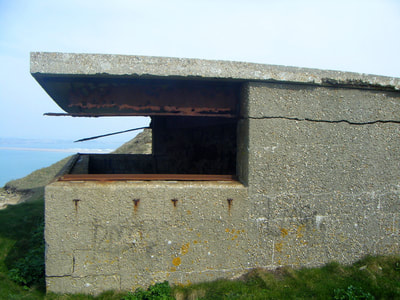 This photograph shows the post before the collapse of the roof. 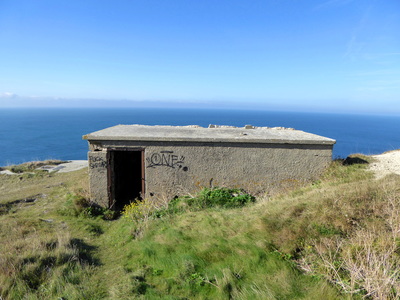 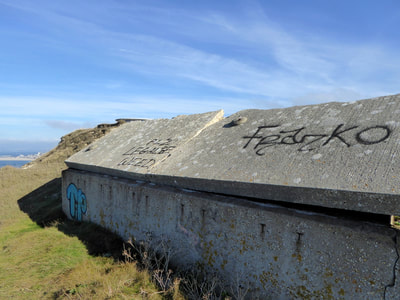 In mid-2014, the roof partially collapsed. 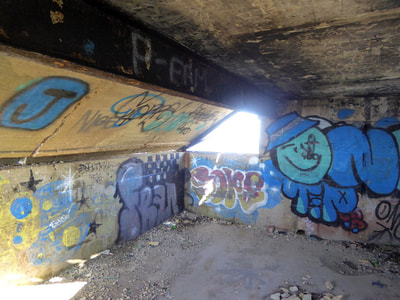 The interior has been a target of vandalism and graffiti. 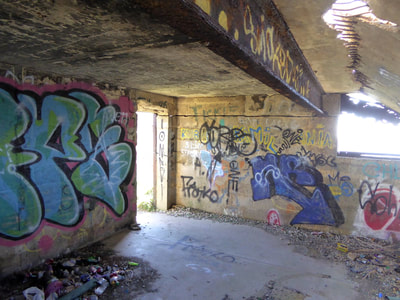 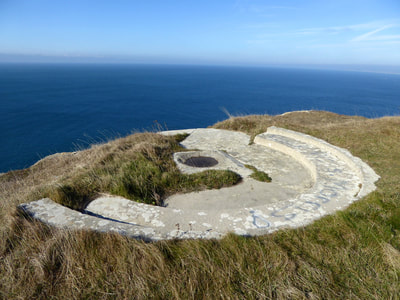 Next to the post is one of two nearby small gun emplacements dating to World War I. 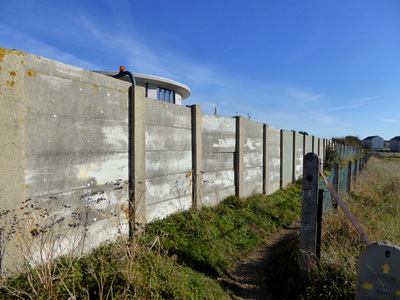 The concrete wall that runs along the edge of the battery inland. 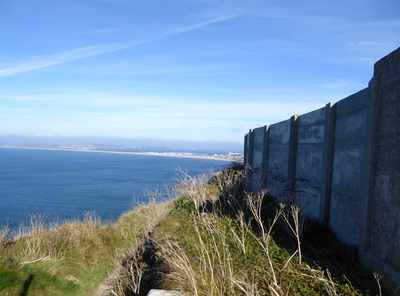 The clifftop coast path coils around the battery's boundary. 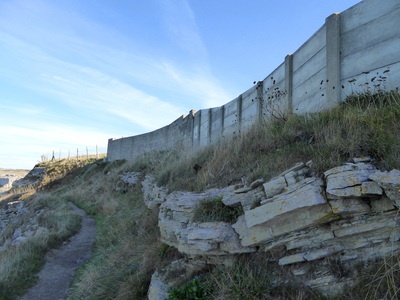 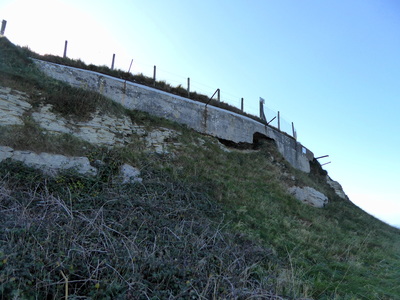 The boundary of the battery's surviving gun emplacement can be clearly seen. 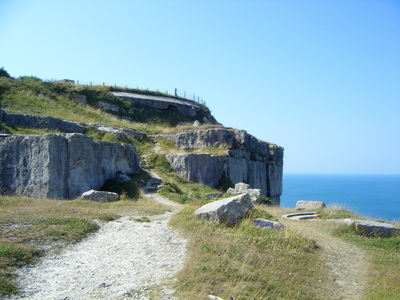 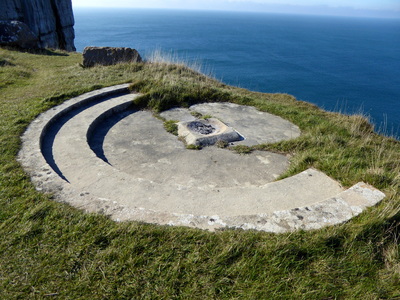 The second small gun emplacement can be found at this point too. 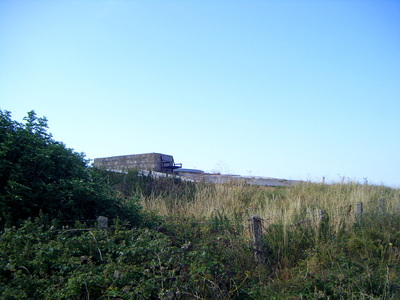 A view of this side's gun emplacement from slightly inland from the cliffs. 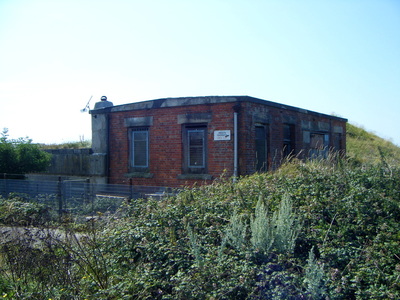 This building is located close to the emplacement too. 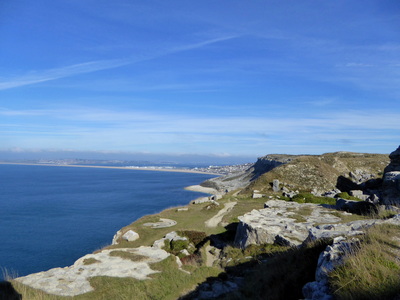 The view across the western side of Portland from this area. 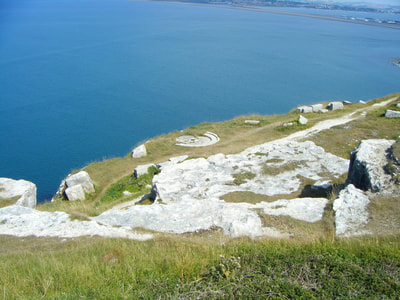 The small gun emplacement can be seen here. 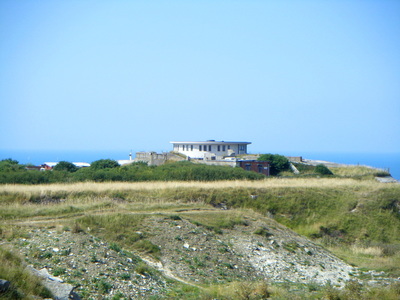 The battery as seen from West Cliff area. 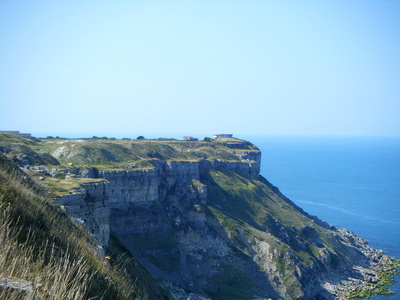 Even from a great distance, the battery, particularly the recent build, is plainly obvious. 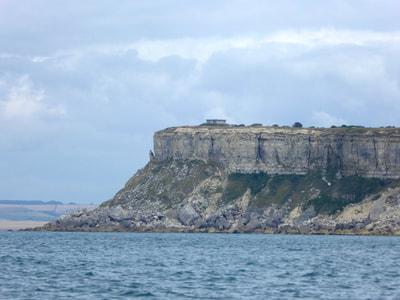 Blacknor Battery from the south west.