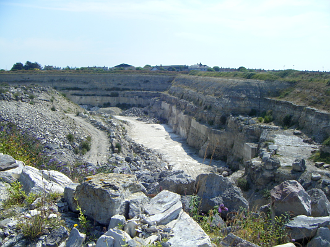 Bowers Quarry is an active stone quarry of 19th century origin on the western side of Portland, in the north-west corner of Tophill. Today the quarry is operated by Albion Stone through mining. Bowers became the site of the first Portland Stone mine, with operations commencing in October 2002.

Bowers Quarry was the selected site for the planned Mass Extinction Memorial Observatory (MEMO). In 2017, it was announced that the MEMO Project would join forces with Jurassica, another planned attraction on Portland, to form the attraction Eden Portland, to be based at Bowers Quarry and in the nearby Jordan's Mine of Inmosthay Quarry.

History
Bowers Quarry has been worked commercially since the 19th century. Initially most quarrying in the area had been undertaken on the clifftops of West Cliff, but as the 19th century progressed, quarries began to move inland. By the end of the 19th century, both Tout and Trade Quarries to the north of Bowers were well-established, with workings spanning from West Cliff to Wide Street. Bowers had started to progress inland toward St George's Church by this point, particularly within the northern section adjacent to Trade Quarries. Further expansion east was seen at the beginning of the 20th century.

Bowers Quarry became listed as disused on OS maps of the mid-20th century. By this time, both Tout and Trade Quarries had ceased use, although Trade Quarries' precast concrete works remained operational. Later in 1979, Albion Stone secured the lease for Bowers Quarry from the Crown Estate. As the film's first quarry on Portland, Bowers saw more expansion south and east throughout the 1980s and 1990s. Although the clifftop region of Bowers remained disused, it was used for the dumping of stone waste, which resulted in the destruction or burial of a number of old tramway lines and tunnels from the quarry's earlier workings.

By the 1990s, Bowers had largely been exhausted through traditional open quarry methods. However, around 6,000 cubic metres of stone remained along the boundary of the quarry. In order to extract this stone, Albion Stone, with assistance from mining experts Wardell Armstrong, drew up a planning application for submission to the Mineral Planning Authority. The application was submitted in 1998 and approved in 2000, allowing the firm to extract the boundary stone using a number of small mines and a process known as "high wall mining". As a trial, the new working method also aimed to reduce the environmental and visual impact of quarrying on Portland. The trials at Bowers began in October 2002 at the southern end of the quarry and were completed in 2005. In order to ascertain the continued viability of mining, regular measurements were taken within the mines, including assessing the strength of the stone and checking for the potential forming of cracks. The first public open day held at the mines was in 2003.

In the spring of 2006, the extraction of boundary stone commenced using a series of small mines within the east and south-east regions of the quarry. Following the successful use of mining at Bowers, Albion Stone began preparing a new planning application to use the same technique at Jordan's Quarry, located north-east of Bowers. Mining started there in 2008 and also proved to be a success. In 2013, Dorset County Council approved a new planning application, allowing Albion Stone to extend the existing mine at Bower's Quarry further south into the northern region of Weston.

In 2018, plans for the expansion and merging together of Jordan and Bower's Quarries were approved, allowing the stone between the two sites to be extracted. The linking of the mines to form one operational site was considered by Wardell Armstrong to be more efficient and environmentally sensitive than continuing to work the two separately. The excavation work commenced in early 2019 and was completed in early 2020. Bowers continues to be mined for Bowers Roach, Whitbed and Basebed. The disused sections of the quarry also contains stone waste which is transformed into aggregate.

MEMO Project
In 2006, the Mass Extinction Memorial Observatory (MEMO) project was established by the locally trained stone-carver and project director Sebastian Brooke. The project's original plan was to create and maintain an observatory, designed by architect David Adjaye, within Bowers Quarry. Described as a "spiralling memorial tower and learning centre", MEMO was to pay homage to the world's extinct species. The lease for the site was agreed with the Crown Estate, while planning permission was approved in early 2012. Sir Ghillean Tolmie Prance, the former director of Kew Gardens, was appointed as the MEMO trust chairman, with Tim Smit, co-founder and chief executive of the Eden Project, appointed as principal adviser.

The costs of MEMO were estimated to be £20-£25 million. Later in October 2017, it was announced that the MEMO Project would join forces with Jurassica, another planned attraction on Portland, to form the attraction Eden Project, which was originally given the name "the Journey". The proposed attraction is to be based in both Bowers Quarry and the nearby Jordan's Mine of Inmosthay Quarry.

Harmonic Fields
In August-September 2012, Pierre Sauvegeot's Harmonic Fields, an ensemble of more than 500 instruments, was set up near the cliff-edge within a disused section of the quarry as part of the London 2012 Festival and the the Inside Out Dorset Festival. The orchestra of instruments were played by the wind, creating a "symphonic soundscape that was unique to each visitor". Funded by Arts Council England and Dorset County Council, the Guardian described it as "not only a striking piece of land art, but a carefully constructed piece of music".

Sauvegeot, the creator of the project, had commented at the time: "We're constantly bombarded with new noises, which amplify, until we no longer listen. Sounds from Harmonic Fields are quiet and come at their own pace, like waves on the seashore. It is music in its simplest, most primal form. The Dorset coast is a wonderful place to bring Harmonic Fields - it's rolling hills and wide seascape is the perfect place for the audience to immerse themselves in the sounds of the instruments and the wind." 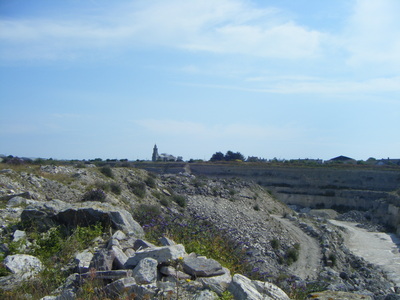 Part of Bowers Quarry, looking across towards Reforne, Easton. St. George's Church can be seen in the distance. 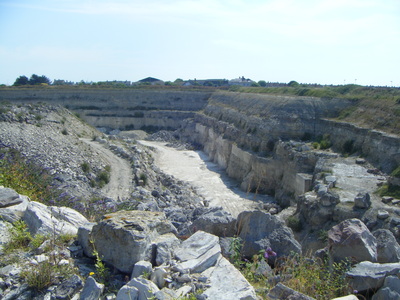 An idea of the expansive depth of the quarry. 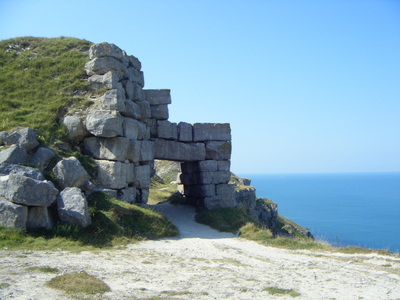 A remaining example of a stone tipping bridge at West Cliff. The good stone would be transported along the cliff-edge to Priory Corner, to begin its journey on the Merchant's Railway. 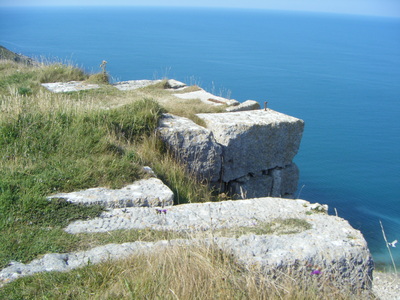 Another tipping point along the cliff. 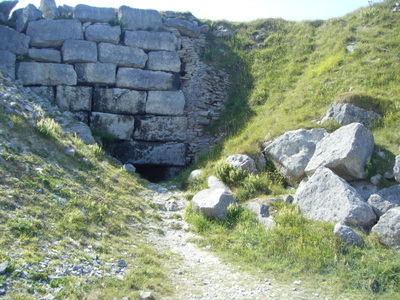 An old tramway tunnel is found along West Cliff. 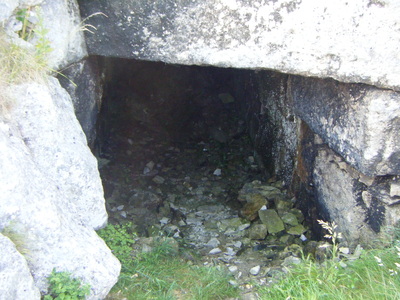 It is now blocked off with much rubble, but once led into Bowers Quarry.