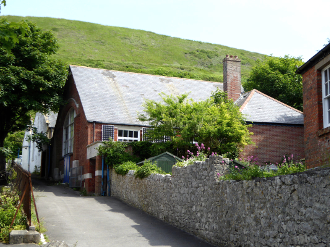 In 2014, the former school was designated an Important Local Building within the conservation area of Underhill. It is considered important for its educational legacy and role in the island's social history.

History
Establishment of Day School in 1845 and later expansion in 1905-06
Portland's Methodist circuit was established when the preacher Robert Carr Brackenbury visited the island in 1791. He had a small chapel built at Fortuneswell in 1793 and purchased a house at Wakeham in 1794 for use as a chapel to serve Tophill. After his death, his wife, Mrs Brackenbury, had a purpose-built chapel erected within the hamlet in 1825, and she remained a long-term benefactor and supporter of the Portland circuit. Although Sunday Schools had been in existence since the circuit's early years, the idea of building the island's first Methodist Day School was put forward by Mrs Brackenbury, who held a meeting at the Minister's House on 27 May 1844 to discuss her proposal. It was agreed that the school would be of great benefit to the community, and the meeting was also successful in raising the majority of the capital needed for its construction; Mrs Brackenbury donated £30, while the others present at the meeting collectively put forward £120.

With plans for a schoolroom, measuring approximately 46 by 26 feet, soon completed, the chosen site for the new school was a one-and-a-half acre plot of land, which had been purchased by the Methodists for £100 in January 1822. Tenders were soon sought and Mr. John Pearce of Weston was hired to erect the school for a cost of £173. Work commenced on 1 September with the laying of the foundation stone and the school opened on 15 May 1845, which was celebrated with a public tea that drew a crowd of 380 residents. During the 1850s, a new, small classroom was added to the school, along with an enclosed backyard, both of which faced the playground.

By the 20th century, as Portland's population continued to grow, the existing schools at Underhill became increasingly overcrowded. From June 1904, the trustees of the Wesleyan School began considering a £1,500 extension of the existing school building, to make space for an additional 100 children. Once the scheme was approved, plans were drawn up by the architects Crickmay & Son, and the local builders Messrs Jesty & Baker were hired in April 1905 to carry out the work. The foundation stones were laid on 12 June 1905 and the new schoolroom was opened on 29 November by Mrs. George Siggs. After the opening ceremony, a public tea was held in the new building, followed by an evening meeting at the adjacent church.

Described by the Southern Times and Dorset County Herald as "handsome and commodious", the final cost of the new schoolroom was £1,600. It was able to accommodate 80 children, and measured approximately 47 feet by 36 feet, with a height of 20 feet. Built of red brick, the schoolroom also included a small classroom and separate cloakrooms for boys and girls. With the extension work completed, the original part of the school was then divided into two classrooms. In order to reduce the debt acquired from building the new schoolroom, a number of fundraising events followed, such as a concert held at the school in December 1905, and a bazaar and concert in April 1906.

Use in the first half of the 20th century
Despite the extension, both the Wesleyan School and St John's soon struggled again to provide enough spaces for the parish's children. Initially, in 1910, the Wesleyan School's trustees began talks with Dorset County Council's Education Committee over the possibility of further extension work to provide spaces for 200 additional children. However, when the trustees failed to "disclose their intention" in good time, the committee opted to construct a new council school instead. They felt that building a new school would prove more beneficial for Portland than the more expensive option of "patching up and enlarging the old Wesleyan school". Despite the trustees' last-minute attempts to negotiate an agreement in October 1910, the idea of extending the school was scrapped and Underhill Council School would be built in 1913.

Although Easton Wesleyan School, opened in 1878, was leased to Dorset County Council for use as a council school from 1905, early plans to lease Underhill's Wesleyan School were dropped. In 1931, the County Education Committee decided against plans to lease the school due to existing financial restraints. Later in 1934, the Committee agreed to a proposal to have the Methodist School become an infant's school for Underhill and the change took place in 1936, with the school being renamed Portland Methodist Infant School.

With the outbreak of World War II, Portland's Home Guard originally trained at the school before moving to the Drill Hall at Easton Lane. The school itself evaded major damage from the many German air raids at Portland, although one raid in March 1940 caused much damage in Fortuneswell and left many of the school's windows smashed. Later that September, the nearby St John's School suffered extensive damage during a raid, resulting in its permanent closure, which in turn placed new pressures on Underhill's remaining two schools. The Methodist School began accepting older children again until 1946, when it returned to use as an infant-only school.

Post-war use as a council school
Dorset County Council secured a lease of the school from the Methodist trustees in September 1948. They took over the running of the school the following month and renamed it Brackenbury Infant School. The original 21 year lease was followed by subsequent ones, the next of which was a five year one signed in July 1971 but backdated to October 1969. In addition to paying an agreed annual rent, the Council were responsible for maintaining, repairing and insuring the school premises, while the Methodist church were allowed use of the building during out-of-school hours.

During the 1970s, overcrowding once again became an issue at the school, prompting the County Council to purchase the nearby former telephone exchange at the bottom of Tillycombe in 1975 and transform it into a classroom for Reception year children. In 1983, the building became the home of the pre-school known as the Brackenbury Family Centre.

Campaign for a new school and replacement
The County Council first announced plans to replace the aging school in 1946. Although a plot of land was purchased at Verne Common during the 1950s (later the site of Vindelis Court), no new school was constructed. Later a larger plot of land was acquired on the Common behind Ventnor Road, but again no replacement followed. However, the 1980s saw unprecedented pressure placed on the Council for a new school. A highly critical report, titled "The Facts", was produced by the school's governors in 1983, which detailed the inadequate, outdated and limited facilities, and the generally poor condition of the building. A government inspection in May 1985 commented how the "poor and unsuitable accommodation is seriously affecting the quality of work and achievement of many pupils". With six classes and only three classrooms, some pupils had to be taught in partitioned sections of the school hall.

Support for a new school came from a wide variety of people, including the existing governors and teachers, parents, South Dorset MP Robert Gascoyne-Cecil and Portland Town Council. The Brackenbury Action Association was formed to campaign for a new school and after much publicity on TV and in the press, the County Council agreed to build a replacement. With the earlier proposed site behind Ventnor Road being considered too steep and costly to develop, other areas were considered and allotment land off Three Yards Close was selected as the most suitable site. The landowner was approached during 1986 and agreed to sell, but her death the following year delayed the County Council from acquiring the site until 1988. Once the land was secured and plans designed, planning permission for the new school was approved in 1989, and construction was carried out in 1990-91. The first pupils to move to the new Brackenbury School were the Reception and Year One classes on 13 May 1991. The Year 2 pupils remained at the original school until its final day on 17 May.

Despite local pressure, the County Council decided against their original intention of incorporating the Brackenbury Family Centre into the new school. The centre, which became known as the Brackenbury Community Nursery around 1990, remained in the former telephone exchange. With the County Council refusing to replace the existing premises, fundraising by the Nursery Building Fund Committee followed and the money raised allowed plans for a new nursery to be drawn up by councillor and school governor Les Ames. These plans were adopted by the County Council and they gained planning permission in 1994 to build the nursery at the bottom of the new Brackenbury School grounds. It opened in March 1996, allowing the former telephone exchange to be sold. The building was demolished in 2002 and replaced with a three new houses forming Brackenbury Terrace, erected by Weymouth & Portland Housing.

Post-use of the original school including as the Brackenbury Centre
Following its closure in 1991, the old Brackenbury School became the Munchkins Day Nursery. It closed around the mid-2000s, leaving the building with little use and an uncertain future. In 2010, the idea of making the former school available for community use stemmed from Sammy Polley. An agreement was made with Underhill Methodist Church, and work commenced in January 2011 when a working party from HMYOI Portland assisted in tidying the building, and clearing it of unwanted furniture and waste. Later in September, volunteers began the renovation work, which included the former school hall and playground, while the "project room" was renovated by the Magna Housing Association. The centre received various grants, including from the Synergy Housing Neighbourhood Panel, while the Portland Methodist Circuit paid for repairs to be made to the roof.

The Brackenbury Centre was made available to hire from November 2011. In addition to the hall and project room is a large classroom and kitchen. To the rear of the centre, part of the former school was refurbished and opened in 2011 as the Tanren Dojo, but has been used as a private workshop since 2016. In March 2013, the Brackenbury Centre was the winner of a makeover through the Puragen Renewable Energy's "Keeping It Local" scheme. Both Puragen and volunteers assisted in refurbishing the hall floor in April, while solar panels and a new heating system was added to the building. The centre continues to be available for hire, while the older parts of the school overlooking the playground remain in use as private workshops.

Many thanks to Sammy Polley of the Brackenbury Centre for allowing access so that the majority of these photographs, including the hall, could be taken in 2018. 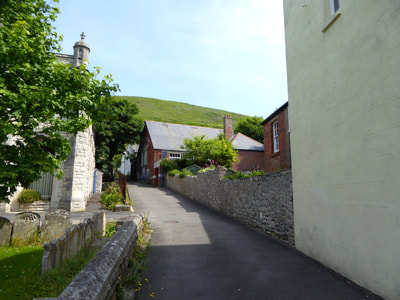 Brackenbury School as seen from the main Fortuneswell road. 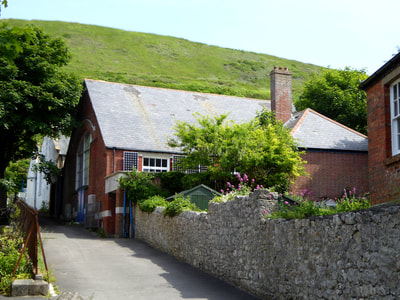 The red brick building is the 1905 schoolroom and now in use as the Brackenbury Centre. 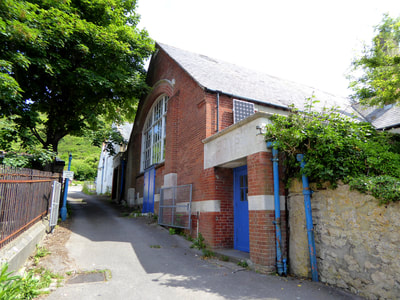 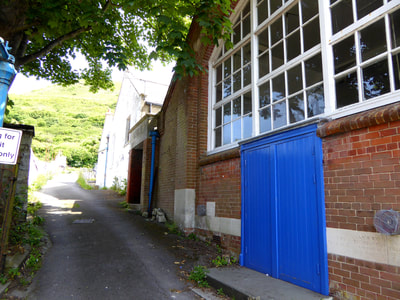 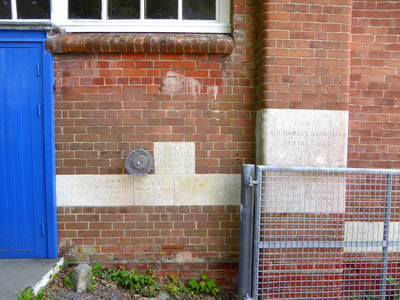 Some of the many foundation stones embedded in the brickwork can be seen here. 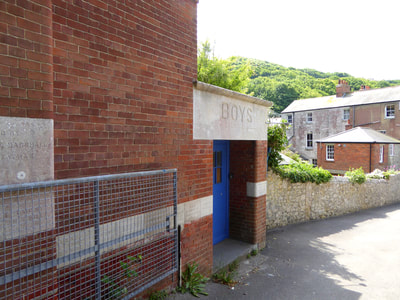 The 1905 schoolroom had two separate entrances, one for boys and one for girls. 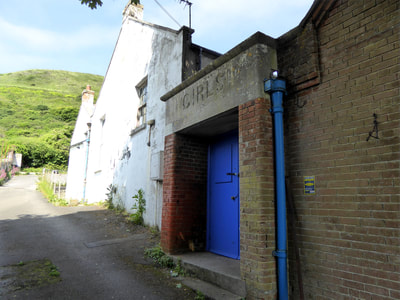 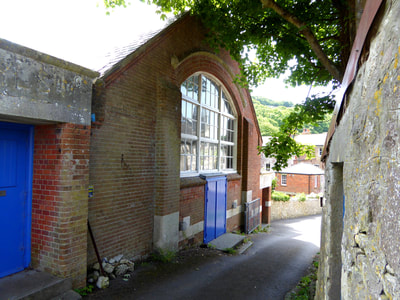 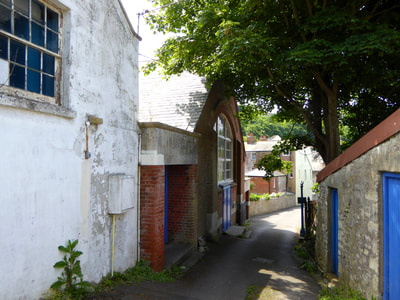 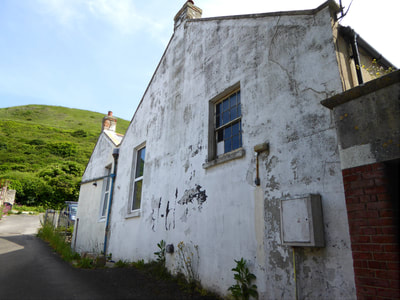 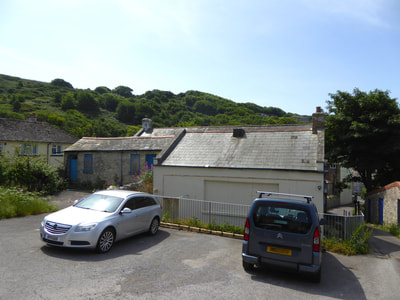 The former school from the playground. 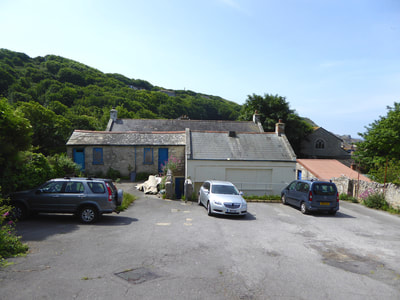 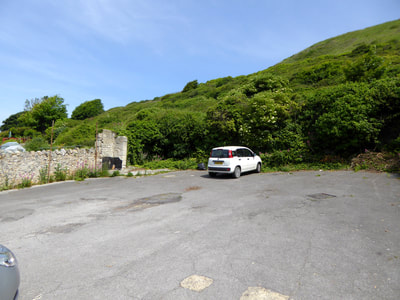 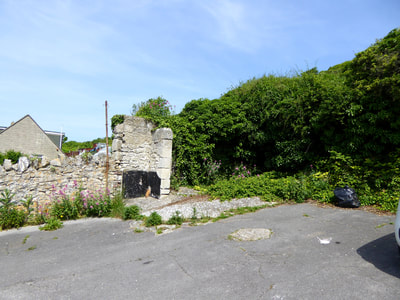 The remains of the now-demolished outdoor toilets for boys can be seen here. 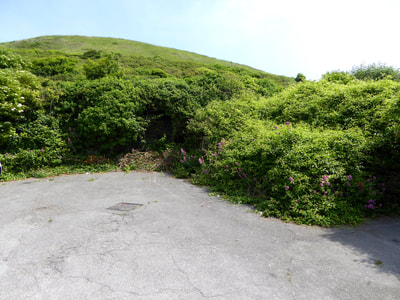 The girls' outdoor toilets was located opposite. 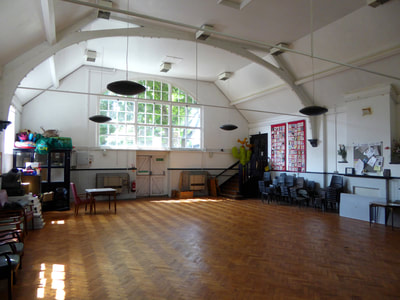 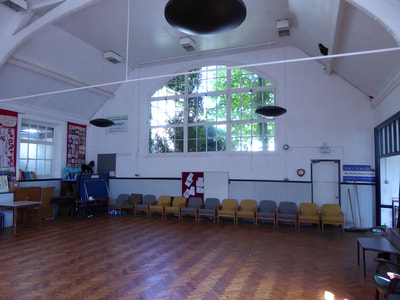 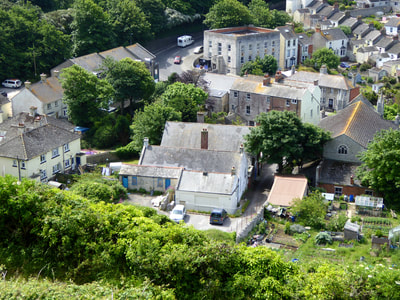 Brackenbury School as seen from Verne Hill. Underhill Methodist Church, built in 1898-99, is seen to the right. 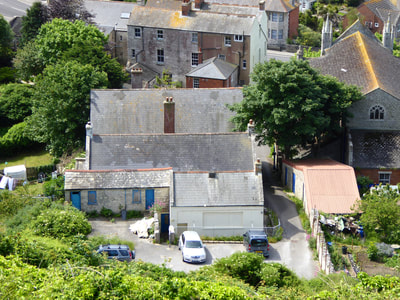 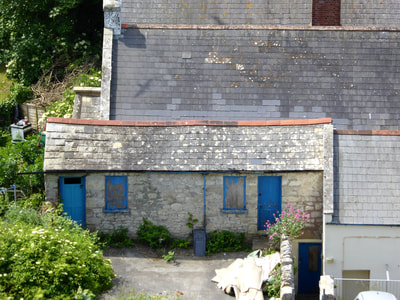 This building was originally marked as an enclosed courtyard on an 1857 plan of the school. 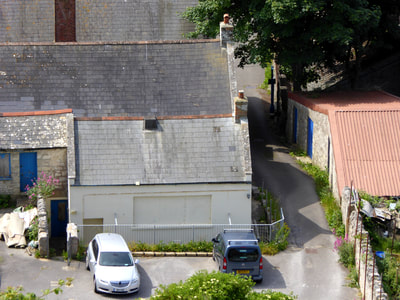 This small section was added in the 1850s as a new classroom. 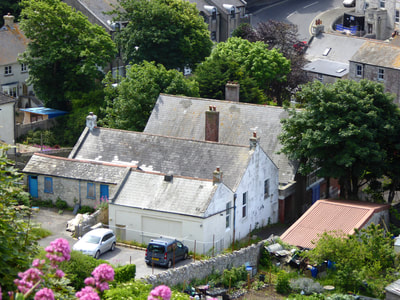 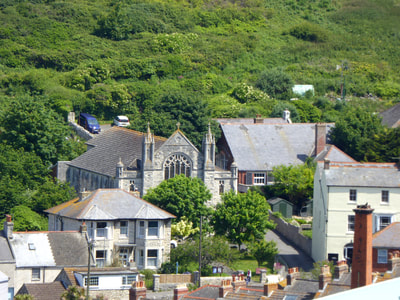 Underhill Methodist Church and the former school as seen from Priory Corner. 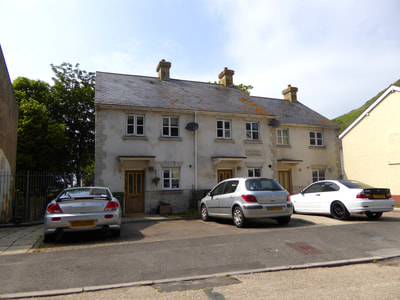 Brackenbury Terrace was built in 2002 on the site of the telephone exchange building, which was used as an additional classroom and later a nursery until 1996.