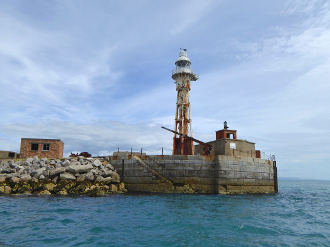 The Breakwater Lighthouse is an operational lighthouse of early 20th century origin at A-Head, on the southern end of the north-eastern breakwater of Portland Harbour. It overlooks the harbour's east ship channel, with the Breakwater Fort on the opposite side. The lighthouse continues to operate as a navigational aid for one of the largest man-made harbours in the world and is included as part of the north-eastern breakwater's Grade II listed status.

The 22-metre cast-iron lighthouse is white-painted and has a hexagonal and skeletal frame, with a spiral staircase and central cylinder. The entire upper section, including the windows and dome roof, are made with cast phosphor bronze. One of the lighthouse's former fresnel lens is now in the collection of Weymouth Museum.

History
Earlier navigational lights at Portland Harbour (1851-1905)
In the mid-19th century, Portland Roads was transformed into a harbour of refuge with the construction of two breakwater arms between 1849-72. The first temporary light erected on the breakwater shone from 1851, providing navigational aid to the naval and merchant vessels entering and leaving the harbour. Over the course of the construction work, the number and positions of navigational lights along the breakwater arms changed. In 1875, a fixed red light (an oil lamp, with fog signals) was placed on top of the Breakwater Fort, at the northern end of the outer breakwater, as a permanent navigational aid. It had a range of eight nautical miles in clear weather.

As the end of the 19th century neared, rapid advances in naval warfare and technology, particularly of the torpedo, led to concerns over the harbour's vulnerability. Despite the value of the existing breakwaters, the northern region of the harbour remained exposed between the Breakwater Fort and Weymouth. A decision was made to completely enclose the harbour and the construction of the two further breakwater arms was carried out in 1896-1905. Until the new breakwaters could be completed, a series of twelve dolphins (structures of iron and timber), holding boom defences between them, were placed across the open gap in 1894-95, with a number of temporary lights installed.

Establishment and operation of the Breakwater Lighthouse over the course of the 20th century (1904-95)
As the north-eastern breakwater neared completion, a lighthouse was erected at A-Head in 1904-05 to replace the two temporary vertical white lights that had been in the same position on Dolphin A. The lighthouse was built by Chance Brothers and Co of Birmingham and first lit on 14 March 1905. At the time, the Portsmouth Evening News described it as an "important improvement" in terms of navigation at Portland. They commented: "The new light shows with great brilliancy the entrance to the roadstead."

The lighthouse, which stood at a height of 70 feet above high water, provided a white flash every five seconds and had light power of 12,400 candles. It had a range of fourteen nautical miles in clear weather. A fog bell was also installed at the lighthouse and when in use was struck once every ten seconds. In addition to the Breakwater Lighthouse, two further navigational lights were installed on the new breakwaters. A red occulting light was installed at B-Head (light power of 52 candles) and a white occulting light at C-Head (light power of 130 candles). A small subsidiary red light was also added on the north-west part of the Breakwater Fort's roof (light power of 32 candles), which replaced the light installed there in 1875.

Recent restorations and current use (1995-)
In 1995, the lighthouse underwent restoration, with the work being carried out by Johnson Controls' Haydon Group. The three month project involved cleaning and repainting the exterior. HM Naval Base Portland closed in 1996 and Portland Port Ltd became the new owners of the harbour, including the lighthouse. From that time, the Portland Harbour Authority became the managing agent of the lighthouse.

Into the 21st century, the lighthouse continued to suffer from the effects of time and weather. As a target of theft, the bronze vents inside the lighthouse were stolen and some parts of the clockwork mechanism had been removed. In 2002, the lighthouse was used by the South Dorset Radio Society as part of that year's International Lighthouse Weekend. The club had previously operated from the lighthouse at Portland Bill for the previous two years of the event, but when the lighthouse proved unavailable for 2002, the club were able to use the Breakwater Lighthouse instead.

As a result of its corroded condition, Portland Port decided to restore the lighthouse in 2016, in favour of replacing it with a modern navigational aid. The local firm Quest Marine Ltd received the contract for the work. The lighthouse underwent restoration including shot blasting and repainting from late 2016, with the work being completed in January 2017. The project required the use of over ten tons of scaffolding, while all the necessary equipment was transported to the lighthouse by barge.

The lighthouse continues to operate to date, aiding the navigation of boats in the area and protecting mariners from collision with the breakwaters. It is lit electrically with a modern LED lamp, which gives a white flash every ten seconds, and can be seen from fourteen miles. Aside from the lighthouse, the breakwater arms of the harbour also have other navigational lights in place, including a red light at B-Head and a green light at C-Head.

Light keepers
In the September 2005 newsletter of the South Dorset Amateur Radio, John Trotter of Australia recalled memories of working at the lighthouse in 1966: "I was a supernumerary assistant keeper at Portland Breakwater Lighthouse in 1966 - I did 2 two month stints. We lived in one of the buildings, known then as "the dwelling", just down from the light tower. We had to climb them every two hours during the night to wind up the lens and pump oil up to the lamp. The breakwater was shared with about a million rats and each time you went out at night there would be a carpet of them fleeing from the torchlight. We took it in turns to go ashore for one morning a week. Eventually, Trinity House promoted me to assistant keeper and appointed me to the breakwater on a permanent basis, but the idea of spending a lifetime as a keeper didn't really appeal so I resigned." 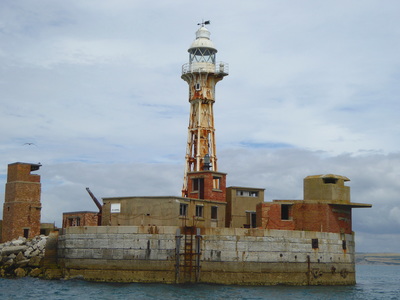 The breakwater lighthouse, as seen on A-head, up close. 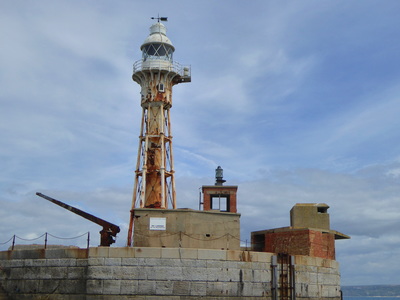 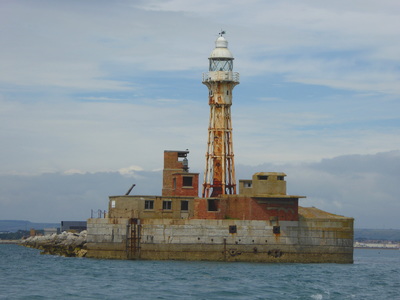 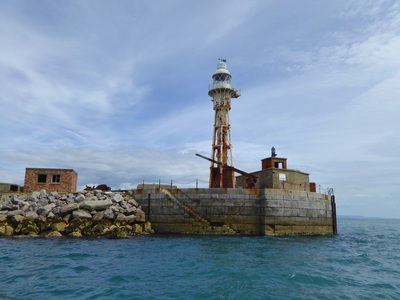 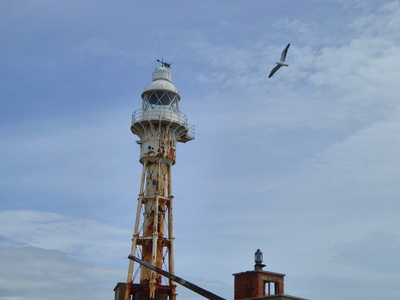 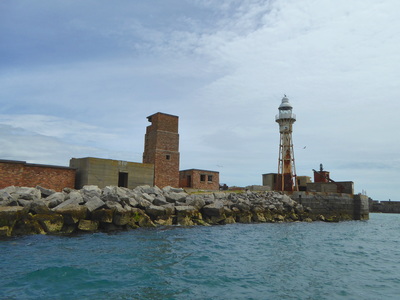 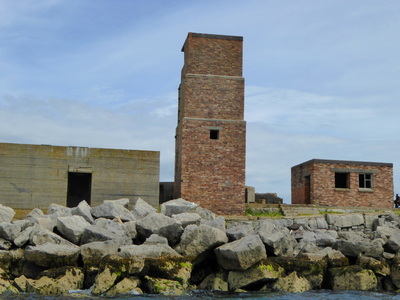 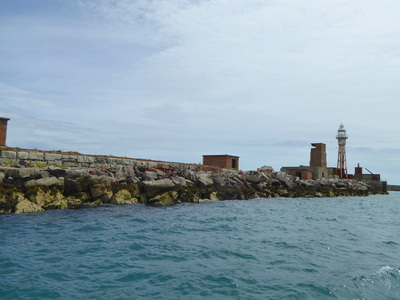 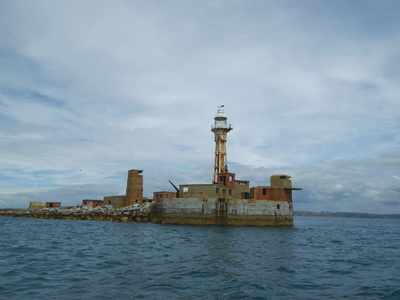 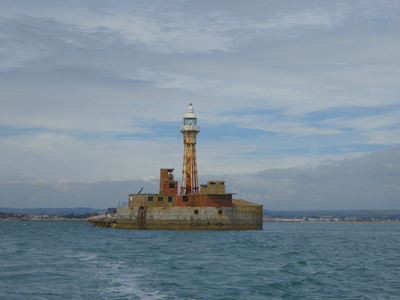 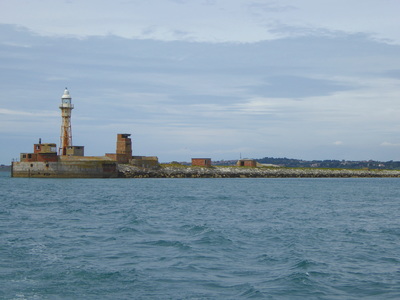 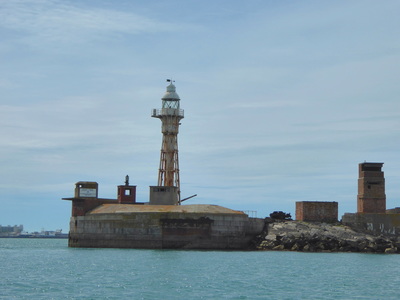 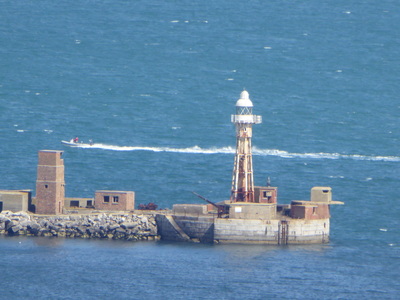 The lighthouse as seen from the Jailhouse Cafe as the Verne Citadel. 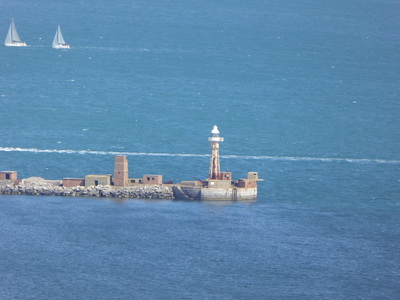 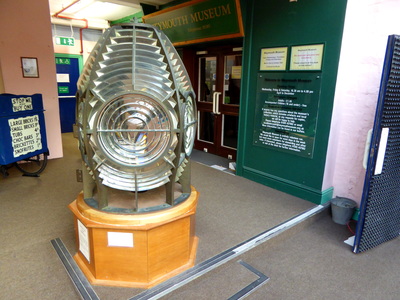 A disused fresnel lens from the lighthouse, seen outside the entrance to a temporary version of Weymouth Museum at Brewers Quay in 2015. 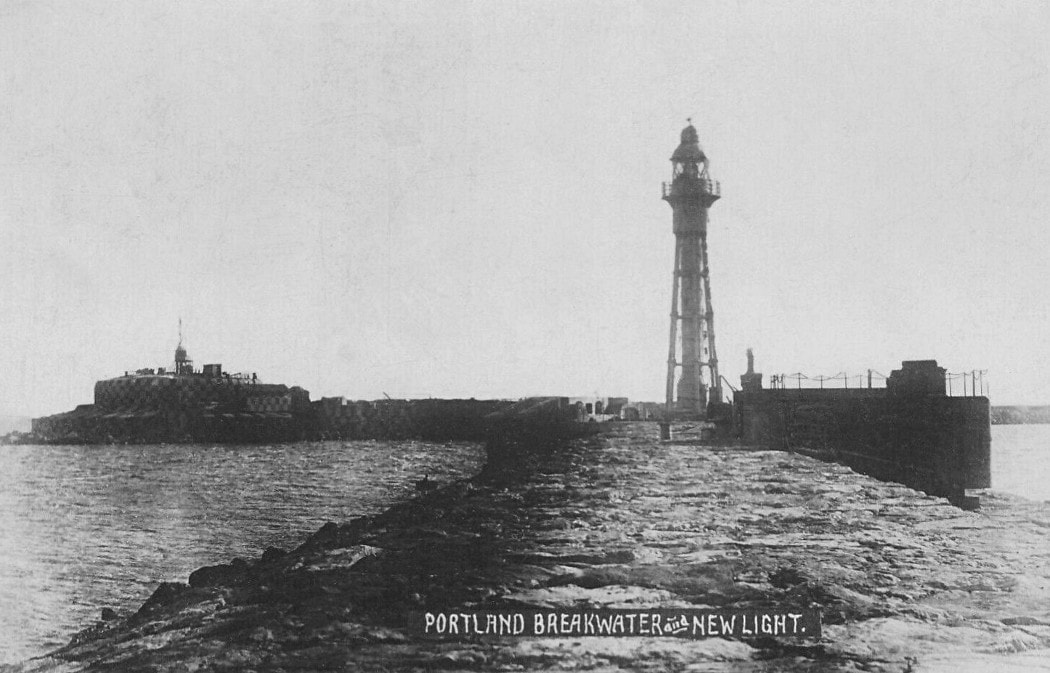 A Pier Head with its new lighthouse and the Breakwater Fort on the opposite side of the east ship channel in c. 1905. The lantern on the fort's roof has yet to be removed. (Photographer unknown). 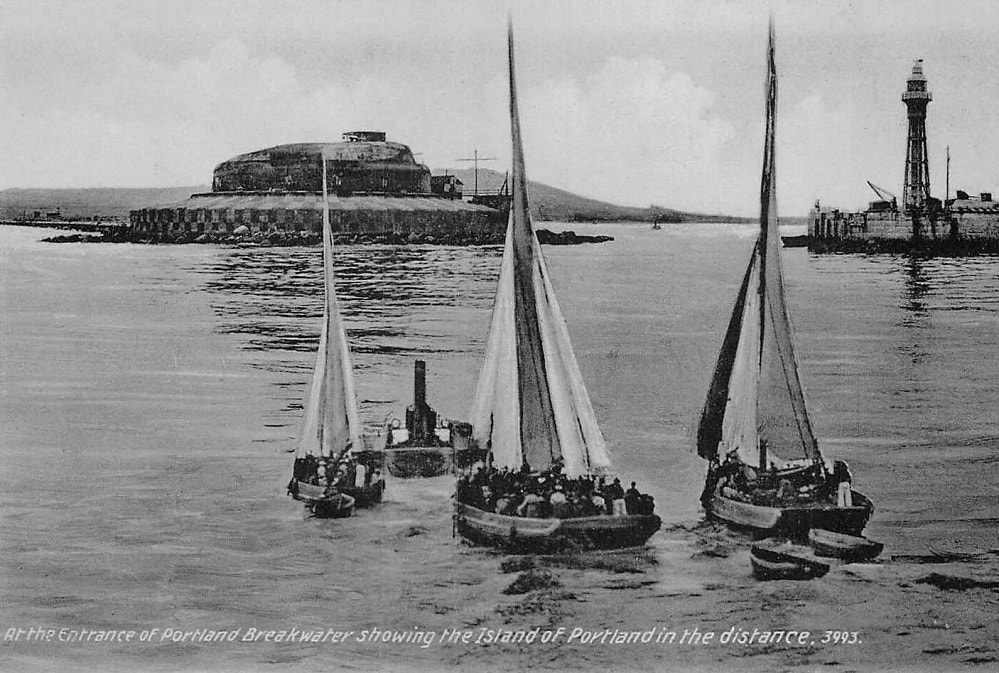 An early 20th century postcard by J. Welch and Sons of Portsmouth, showing the east ship channel. A-Head and its lighthouse can be seen on the right, with the Breakwater Fort opposite.