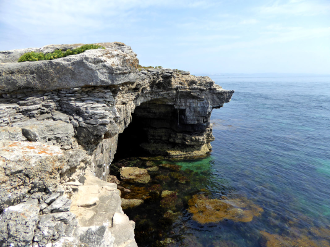 Cave Hole is a large cave with a blowhole on the south-east side of Portland and half a mile north-east of Portland Bill. It is one of a series of caves along this part of Portland's coast. Cave Hole has been associated with Portland's smuggling past, while many ships have been wrecked in the area. Today the cave and blowhole have become tourist attractions, with the cave also being regularly used for Deep Water Soloing (DWS), climbing and snorkelling.

Background
Cave Hole is located in an area made up of a series of caves with steep roof sections, tunnels and ledges. In 1845, the main cave's interior was recorded as being around 50 feet square and 21 feet deep. The surrounding area was quarried from the mid-19th century and into the 20th century, with Longstone Ope Quarries located a short distance north-east and Butts Quarries to the south-west. Much like the Bill Quarries further south, stone would be shipped using cranes erected along the cliff edge. Evidence of the past quarrying activity remains, including a small quarry site located further inland behind the cave. This small quarry shows evidence of the technique 'backfilling', where waste stone was piled up in disused sections of the quarry while work in the active areas progressed.

At the top of Cave Hole, a blowhole has formed on the surface, which has been present since at least the 18th century. In John Love's A New Improved Weymouth Guide, dated 1800, the cave was described as a "remarkable curiosity", having been "perforated by the sea, a great way into the rocks, having an opening on the land: looking into it may be seen the sea; if it happens that the sea is agitated, it affords a scene rather terrific; the hollowness of the cavern increases the sound of the dashing waves, which foaming, rush to the mount with hideous roar!"

During powerful south-westerly gales, the sea is often thrown into the cave and then blasted up through the blowhole. There have been concerns over its danger to walkers as early as 1902, when fencing was erected around it. An iron grill was later placed over the hole and has remained there for many decades to provide protection for visitors wishing to look down into the cave's interior. In the late 1980s, Weymouth and Portland Borough Council felt the feature had become too dangerous and so attempted to seal it up using large blocks of Portland stone. The slabs were destroyed in a storm during January 1990, when massive waves blasted up through the blowhole and threw the blocks around the vicinity. Later in 2004, the stones were placed back over the hole, but successive storms moved them again.

Due to the deterioration of the original steel grid and the failed attempts in using the stone blocks, plans were drawn up to place a new grid across the top of the blowhole, with blocks of stone placed around the edge of it. The work was carried out by Portland Stone Ltd in 2007, with the grid having been funded by the Crown Estate and the Court Leet. It had been made from sections of disused railway lines, which were purchased from Swanage Railway Company.

Wrecks
Various small craft have been driven into the cave and surrounding ones by south westerly gales. The largest recorded at Cave Hole was a 40-ton vessel from Cowes in 1780. In the Book of the United Kingdom, published in 1839, it was recorded how the "uncommonly grand and striking" cave was frequently the location of many wrecked small craft "whose sails may be seen through the hole".

Reliance
Ann Davison, the first woman to single-handedly sail the Atlantic Ocean in 1952, was wrecked near Cave Hole in 1949, on board the 70-foot ketch Reliance with her husband Frank. The Davisons had purchased the vessel with the intention of restoring and using it to cross the Atlantic and begin a new life in America. However, they soon discovered it required more refurbishment than anticipated and the debts continued to grow. With the ketch soon to be repossessed, they decided to hurriedly set sail to the West Indies with the boat still unfinished. Departing Fleetwood, Lancashire on 17 May, they reached the English Channel several days later. With little sailing experience between them and stormy conditions continuing to batter the ship, the Davisons refused help and remained in the channel.

Reliance was wrecked at Portland in the early hours of 4 June 1949. The pair attempted to reach the shore in a life raft, but were caught in the infamous Portland Race. Frank died from heart failure due to exposure and exhaustion, but Ann survived and reached the shore fourteen hours later. Frank's body was recovered on 13 June after being discovered the previous day along Portland's coastline. In 1952, Davison published her first autobiographical book Last Voyage, which detailed the purchase of and eventual wrecking of Reliance. She recalled: "I did not look back at the sea. I knew I had beaten the sea for myself, but only for myself. Everything else the sea won from me." Reliance soon broke up and pieces of the vessel's engine remain scattered inside, and at the entrance of the cave to date. 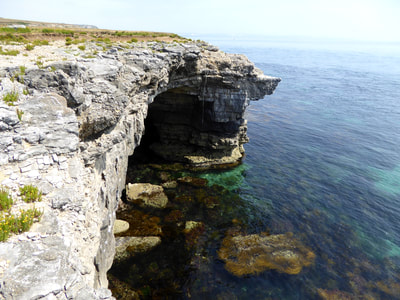 Cave Hole as seen from the clifftop. 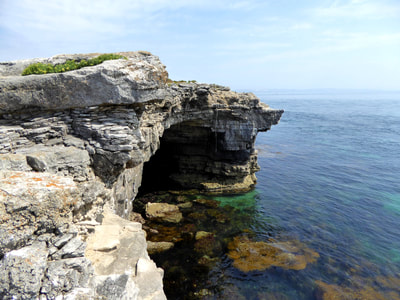 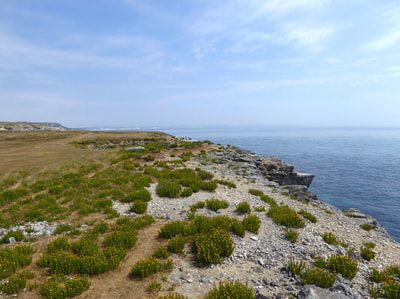 The surrounding clifftop above this part of the coast. In the distance, the depression in the ground marks the location of the blowhole. 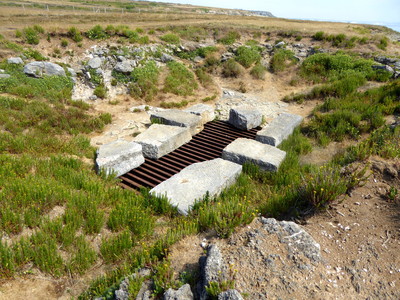 The blowhole, seen with the large metal covering and surrounding slabs of stone. 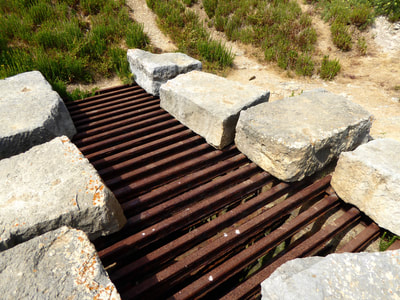 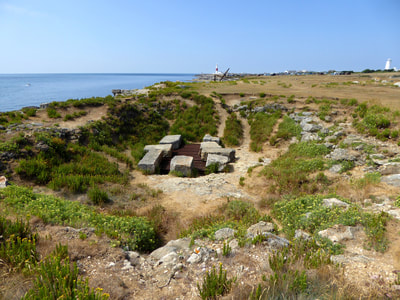 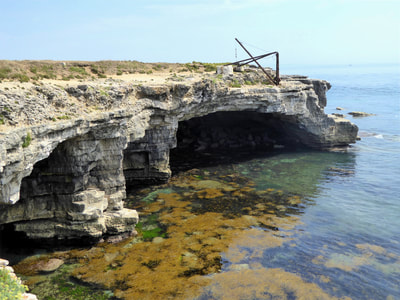 The large cave seen here is at Broad Ope. 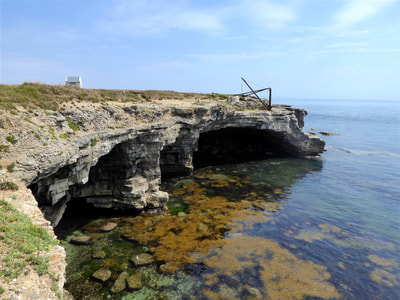 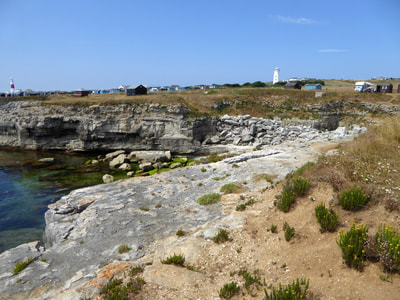 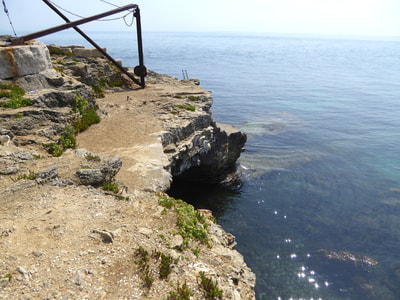 A closer look at the entrance of Broad Ope's cave from above. 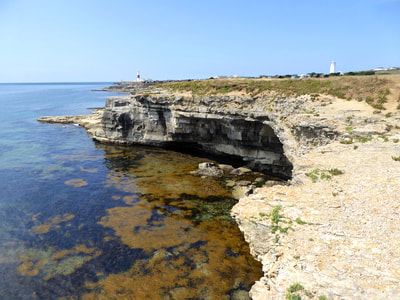 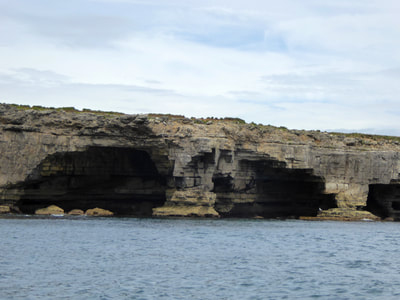 Cave Hole, on the left, seen from the sea. 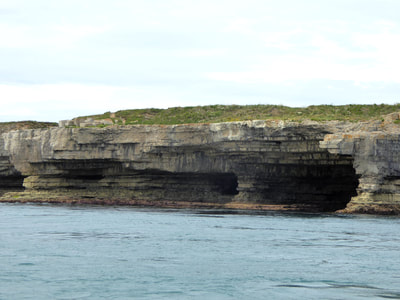 The surrounding area is made up of smaller caves and eroded ledges. 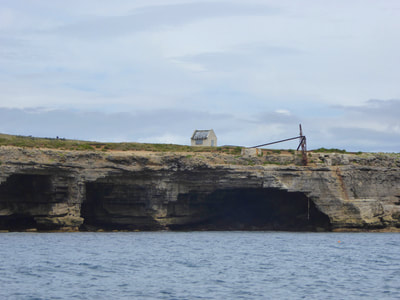 The large cave at Broad Ope. 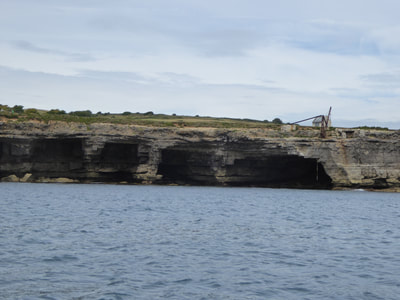