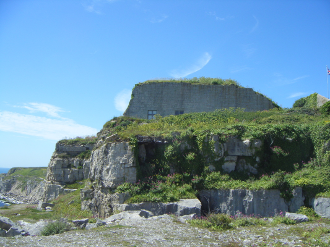 Cheyne Pumping Station is a former pumping station of mid-19th century origin in the south-east region of the island, within an area known as Cheyne, overlooking Freshwater Bay. The station was established for the Admiralty in 1861 and extended in 1872-73. The adjacent Cheyne House was built in 1874 as the residence of the station's engine-man.

History
The establishment of a pumping station for use of the Admiralty and War Office (1850s-1861)
In the mid-19th century, Portland Roads was transformed into a harbour of refuge with the building of two breakwater arms between 1849-72. They were built alongside a number of fortifications to protect the harbour such as the Verne Citadel, while Portland Prison was opened at Grove in 1848 to provide labour within the Admiralty Quarries. These government works resulted in large increases to Portland's population, which the island's established water supply, namely spring-fed wells and cisterns, could not cope with.

Although the Admiralty had already established a number of reservoirs within the harbour's vicinity, they soon realised the existing water supply on the island was not sufficient for their needs. During the mid-1850s, suitable natural springs were found at Freshwater Bay within Cheyne area. A small waterworks was established, along with a tank on the shore below, and pipes were laid to carry water to a large reservoir on the North Common behind Castletown for use by the harbour and the ships anchored there. In October 1856, the Admiralty announced their intention to purchase the land at Cheyne, on both the clifftop and the coastline below, along with the existing waterworks, tank and pipes.

The Portland Harbour Waterworks Act 1857 was subsequently granted and the Admiralty were then able to establish a new and permanent pumping station at Cheyne, which would house the machinery to pump water up from near sea level. They were also given the power to lay any necessary new piping to the harbour and its associated reservoirs. Meanwhile, the War Office had come to the realisation that an external water supply was needed for the Verne Citadel, which had started construction in 1858. It was originally intended to establish a water supply by boring, but these early attempts had failed. A number of tanks were quickly constructed to collect rainwater, along with three reserve tanks excavated into the rock. These were all to be kept full, but would not be used unless required by an emergency or in the event of a siege.

An agreement was made between the War Office and Admiralty for the Verne Citadel to have its main supply of water from Cheyne too. Owing to its vulnerable position on the east clifftops of the island, and its distance from the Verne and Portland Harbour, the pumping station was designed with a bombproof roof and walls to protect it from seaward attack. In April 1861, tenders for the construction of a "bomb-proof engine-house" were requested by the War Office. The contract also included the laying of a cast iron pipe of 10,680 feet. A separate contract was made for the construction of a tank at the Verne.

The work was carried out by workmen of a civilian contractor, Mr. Reynolds, in 1861. Built of Portland stone, the station was owned and operated by the Admiralty, and primarily supplied water to the harbour and breakwater works, and the Verne Citadel. It would also supply a small amount to Portland Prison as well. Much of the supply drawn for use by the Admiralty was stored in a large tank within the Admiralty Quarries, near the top of the Incline Railway, or the reservoir behind Castletown (the latter being filled-in in 1875).  In the event of an impending siege on the Verne, the supply from Cheyne would have been used to fill all of the citadel's tanks, providing a year's supply of water. In 1868, the total capacity of all tanks at the Verne was recorded as amounting to 430,000 gallons.

Early use of the pumping station and expansion in 1872-74
The station at Cheyne provided an adequate quantity of water, although concerns continued to be raised about it being a rather distant source as it was located over two miles away from the citadel and harbour. Aside from the bombproof construction, no other defensive work was carried out for the protection of the station, particularly from a landward attack. A "substantial" wall was erected around the station in 1870.

As water requirements for the harbour and fleet increased, the Admiralty made plans in c. 1871 for the construction of a new covered reservoir near Castletown. HM Treasury approved £800 of the £1,600 cost in the Navy Estimates for 1872-73, but the scheme was then abandoned "owing to the unfitness of the water in the springs proposed to be utilised for drinking purposes, this decision having been arrived at after careful analysis". The Admiralty then had an alternative scheme approved by HM Treasury in September 1872, whereby the station at Cheyne would be extended to accommodate additional machinery there. The scheme had an estimated cost of £950.

Convict labour was used to extend the station's engine house, which commenced in 1872 and was completed in early 1873, followed by the construction of a new engine-room later in the year. As a result of the work, the station was able to supply an estimated 40,000 gallons of water a day. The Admiralty also had Cheyne House built as the residence of the station's engine-man in 1874 for a cost of £150. The two-storey house was also built by a select party of convicts from Portland Prison. The stone was sourced from the Admiralty Quarries, dressed in the prison's workshops and then carted to Cheyne by contractors.

Use of the station from the 1870s until closure in the 1910s
In 1874, concerns were made over the quality of the water by the Verne Citadel's medical officer, which led to a sample being sent away for testing by a War Department Chemist. The results concluded the water was not fit for consumption and plans were drawn up to replace the station with a large concrete area at the Verne Glacis, which would have collected rainwater. However, these plans proved too expensive and the pumping station at Cheyne remained operational, with no illness relating to the water ever reported.

Meanwhile, Portland's growing population led to civilian water sources becoming increasingly inadequate. In 1879, the Admiralty came to an agreement with the Portland Local Board to supply Weston with surplus water from Cheyne. The Admiralty set a rate of 1s. 6d. per 1,000 gallons per year, however water was only to be taken during winter months.

By 1895, the water from Cheyne was condemned for consumption by both the Admiralty and War Department. By this stage, the Admiralty had come to an agreement with Weymouth Waterworks, whereby water tanks were sent on a daily basis to Weymouth to be filled up for the benefit of shipping in the harbour. In 1895, the War Department also reached an agreement with Weymouth Waterworks to provide the Verne with a new supply. Mr. G. Andrews of Portland received the contract for hauling the water carts to and from Wyke Regis to the Verne. He commenced the contract on 12 March 1895 and was responsible for hauling 1,200 gallons to the Verne each day.

With the arrival of a piped water supply to Portland in 1899, the pumping station's water was used for industrial and trade purposes only. The station, last named on a 1903 OS map as "Chene Pumping Station (Admiralty Waterworks)", remained in use until its closure during the 1910s. One of the naval facilities recorded as using the water from Cheyne until 1905 was the Admiralty Slaughterhouses, while the Portland Torpedo Depot continued to use the water, mainly for flushing and circulating, into the 1910s.

Use in the 1963 film The Damned
The former station was later featured in the 1963 film The Damned, which had been filmed at various Portland and Weymouth locations during 1961, and starred Oliver Reed and Shirley Anne Field. The station was known as "The Birdhouse" in the film, where Dr. Bernard's lover, artist Freya Neilson (played by Viveca Lindfors), created sculptures of animals and humans which resemble "charred, crumpled A-bomb corpses". These sculptures were the works of English sculptor and printmaker Elizabeth Frink. 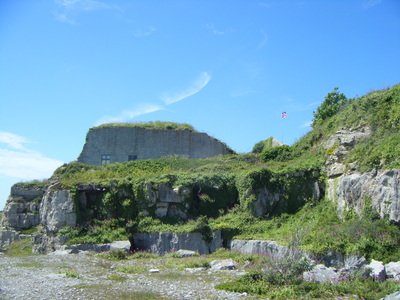 The front of Cheyne Pumping Station, as seen from the old quarry below it. 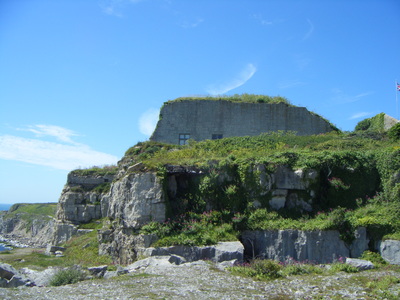 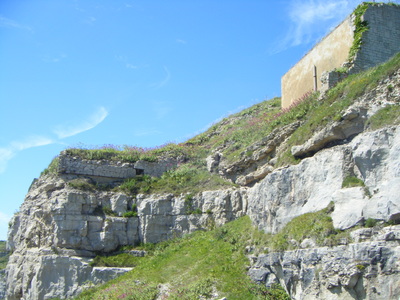 The cliff-side end of the pumping station. 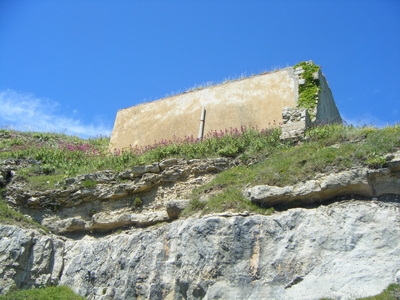 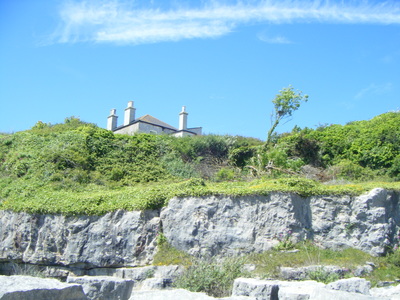 The tip of Cheyne House can be seen from this area too. 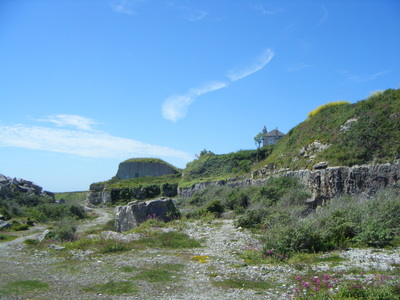 The house and pumping station from the quarry. 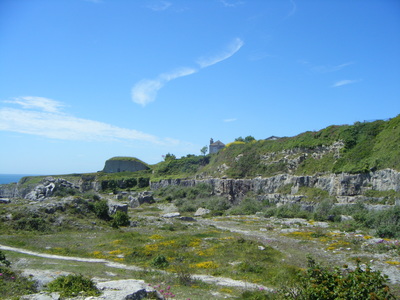 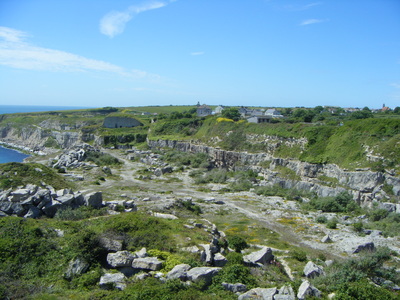 The station and house, with Southwell village in the background. 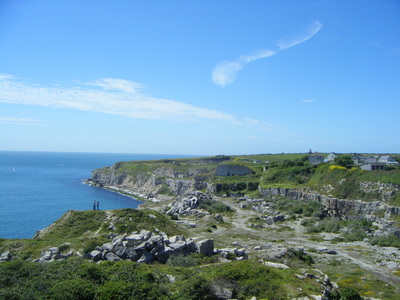 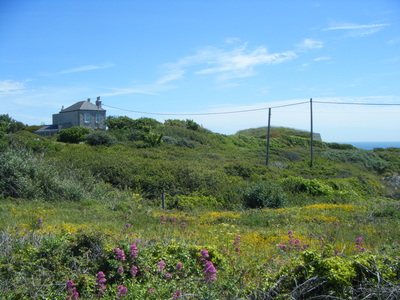 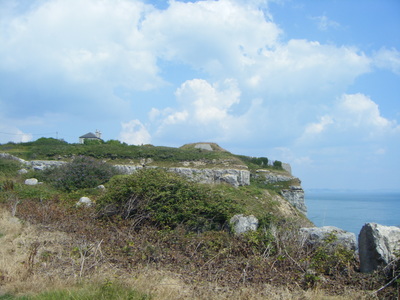 The pumping station and house as seen from further south along the coastal path. 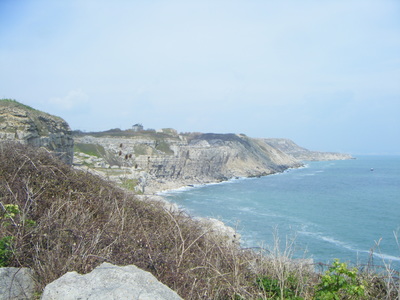 An even further distant view of the two buildings. 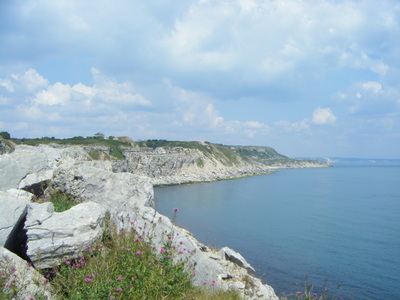 Freshwater Bay can be seen clearly below from this photograph. 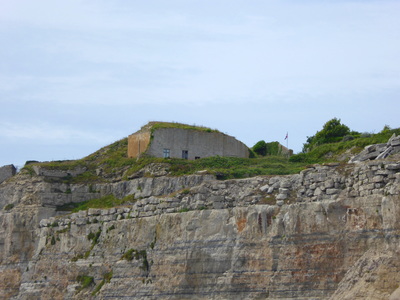 The pumping station seen from the sea. 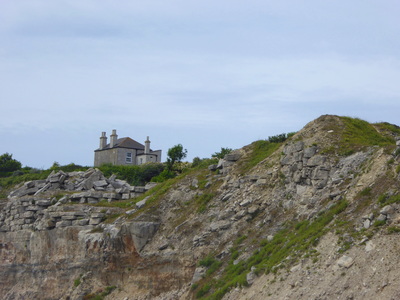 And Cheyne House from the sea. 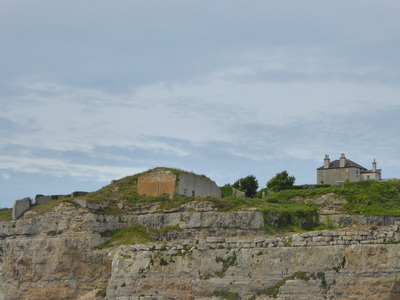 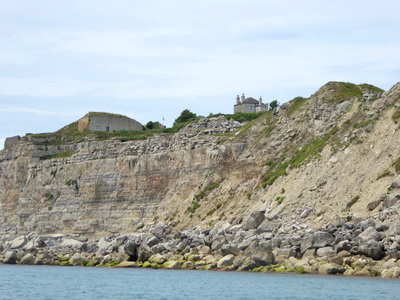 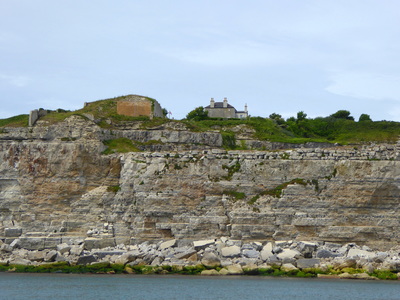 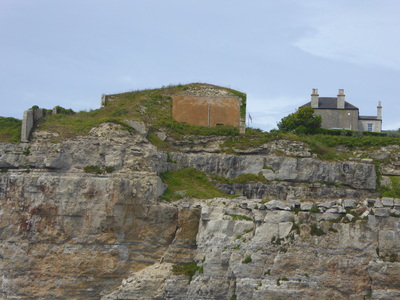 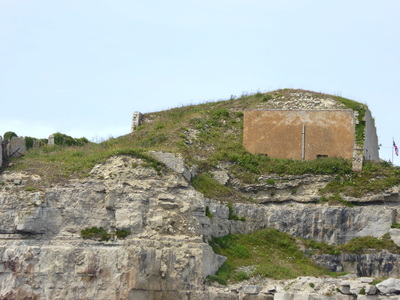 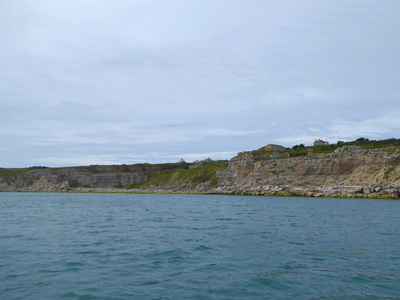