Chiswell Earthworks is a land sculpture above Chesil Cove and in the northernmost region of West Weare. Named after the nearby village of Chiswell, the sculpture was created by John Maine RA in 1986-93.

History
Chiswell Earthworks was commissioned following a suggestion made by local resident Margaret Somerville, who at the time owned Portland's Chesil Gallery. With the completion of some of the new coastal defences for Chiswell, she suggested that some form of sculpture could be created to celebrate the works. Initially unsure of how to bring the project to fruition, Somerville became aware of Common Ground's New Milestones project, who agreed to commission the Chiswell Earthworks project in 1986, in partnership with Chesil Gallery and Portland Town Council. The project was funded by ARC Southern, the Elephant Trust, the Henry Moore Foundation, the European Year of the Environment, South West Arts, Weymouth & Portland Borough Council, Dorset County Council, the Chesil Gallery and a number of private individuals.

John Maine RA, a sculptor with an international reputation, was approached to create the sculpture. He had already used Portland stone and the skills of the island's stonemasons in his previous public commissions. Maine's first task was to choose the site of the sculpture and he selected a grassy area of hillside above Chesil Cove and its defensive sea wall. Drains were then installed to dry out the slope before work commenced.

Over the following years, five walls were built to highlight the various strata found in Portland quarries. From the highest wall to the lowest, the stone layers used were slate, top stone, roach, whitbed and basebed. Under Maine's direction, the two highest walls were built by a Manpower Services team, while the others were built by Maine and his own student team, local volunteers, a Community Programme team and a working party from HMYOI Portland. As each wall used a different type of Portland stone, construction methods varied accordingly.

The walls were formed to represent a wave-like pattern, which each supported undulating platforms of earth, designed to represent the changing form of Chesil Cove's beach as the sea breaks upon it. During the sculpture's construction, the BBC2 arts magazine programme The Late Show visited Portland to observe the progress and produce a short documentary on the project. Around the same time, Common Ground's New Milestone project had been shortlisted for the Prudential Art Awards based on Portland's project.

Some local residents believed that the project would never see completion. However, the sculpture was declared complete in 1993 at an exhibition titled Henry Moore and the Sea, held at Chesil Gallery. The project cost £250,000 to complete. Later in March 2002, some minor repairs to the sculpture was carried out. Today, it is maintained by the Chiswell Community Trust, who also commissioned Tom Maine to produce a short film on the sculpture in 2009.

Since its completion, the earthworks have been highly praised internationally and gathered various awards. The Chiswell Community Trust first received a Green Pennant award for the earthworks in 2005, an award for the best community-run parks in the country. Judges considered the site was a well-managed green space. In 2009, the Dorset Echo reported that the earthwork's had received a prestigious environmental award for the fifth consecutive year from the charity Keep Britain Tidy, GreenSpace and British Trust for Conservation Volunteers. The judges had commented that it was a "unique" and "well maintained" site, thanks to a partnership between Chiswell Community Trust and Community Service Unit 19, Wareham.

Later recollections
Sue Clifford of Common Ground stated in the short 2009 film by Tom Maine: "Nobody had ever done anything like this before, with local people, with communities, in the wild. I think it shifted things a lot, it’s now common place to find art in town squares and such places. It was the start of something. The new Milestones project emerged from our thinking that it would be great to challenge people to look closely at their place in a different way, and the idea of encouraging local folk to commission sculpture for their place seemed to us a really interesting idea. To get people to actually engage with artists, explaining to them why they loved and valued their place. John's work on Portland is a milestone of its own. It's a really important, integrated piece. It's integrated into the community, it's integrated into the land. It's a turning point piece."

In the video, John Maine RA spoke of the project: "It took some time for the ideas to develop. The original drawings just showed what basically were lines of the land, curving lines with a rhythm and energy, and these became terraces. It was a luxury really to be able to spent so much time in one place. The hillside had paths already and so I wanted to create lines that were complimentary to those paths. The local school came down at one point and all the kids lined up in a sort of wiggly line, with other kids up on top of the hill where I worked with them to decide ‘back a bit, forward a bit’ and we sort of drew with these lines of people. Once we had that, we put stakes in the ground and then the Army dug the trench through. Then we had the Manpower Services Commission, then students and some prisoners from the Young Offenders Institute, they were very good, a few at a time with an officer. We spent many hours just out here and we would always have a pile of stone near us, and built it up. As places become more conventional, less people go fishing and more people just go to Chiswell as residential accommodation, the sculpture is a reminder of the fact that Chiswell was linked to the sea and always will be. The important thing is there are people locally who have taken a pride in maintaining it. If it wasn't looked after, it would be a wreck by now."

For the 1989 BBC documentary on the project, Maine spoke of the idea behind it: "I felt that the starting point for it should be that the work should have maximum integration with the landscape. That it should be part of the landscape and not an object in the landscape – that was really the basis of it. And I did a lot of drawings of various ways that you could have an organising of this piece of landscape, where art and landscape came together. These were shown in the Chesil Gallery, and people came in and responded to them in various ways. Eventually I began to feel that one particular direction predominated over others. Rather than have a great triangle of carved stone or something, these terraced forms, they seemed to strike a certain sympathy with people. I felt that I needed to make a sculpture that the quarrymen would understand themselves. They wouldn't see it as being alien, they wouldn't be baffled by it. They would say 'Oh, there's a quarry bank' or 'Oh, there's a bit of slat, oh, he's used a bit of flint', something like that. So in a sense they were my most critical audience. They way we've built it is really like taking a quarry to pieces, and bringing it down here, and building it back again. But of course you can't make it as nature makes it, so you have to use different strategies." 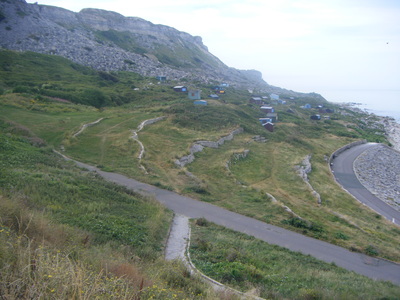 The Chiswell Earthworks seen from the north. 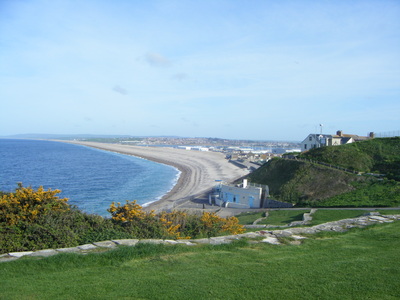 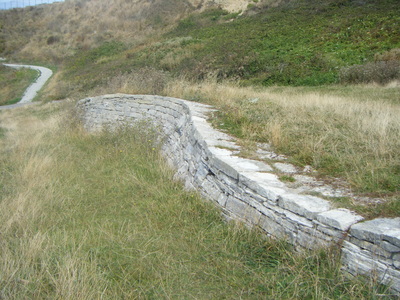 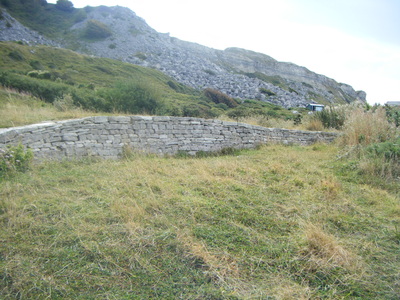 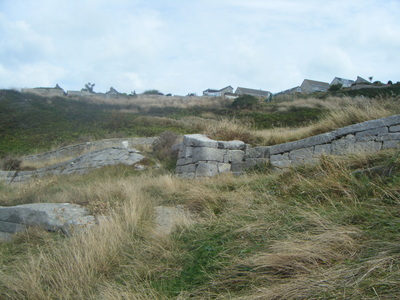 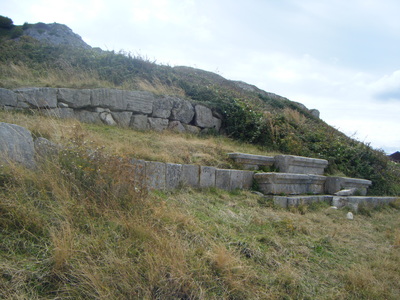 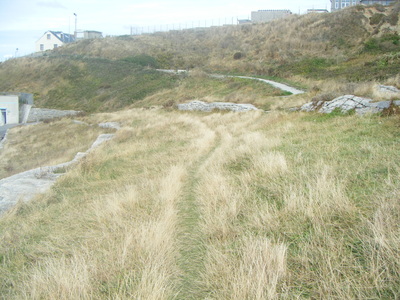 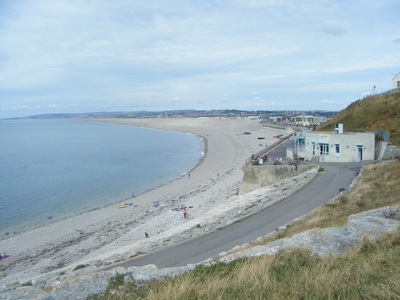 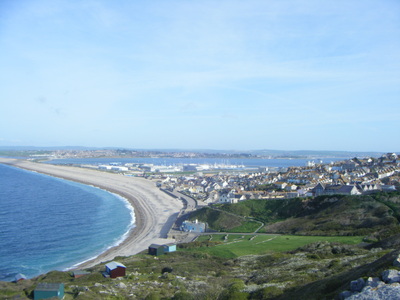