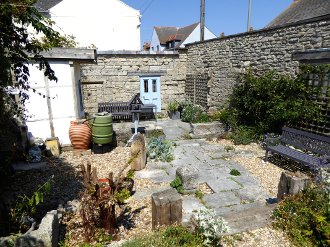 Chiswell Walled Garden is a community garden in Chiswell, close to Chesil Cove. The garden was created between 2004-07 by the Chiswell Community Trust, with funding provided by various schemes, including the Countryside Agency's Doorstep Greens initiative. The garden is maintained by volunteers and is open to the public.

History
History of the site prior to the establishment of the garden
The chosen site for the walled garden, off Lerret Ope, was formerly the site of two adjoining early 17th century cottages, built of Portland stone, with the southern part of the site in use as a large yard. In November 1824, the "Great Storm of 1824" caused widespread destruction in Chiswell, resulting in the deaths of twenty-five residents lost their lives, the destruction of thirty-six houses and the ruin of over a hundred others, including the two cottages. The damage was so extensive that the village never made a full recovery and Fortuneswell soon took over as Underhill's main settlement. Meanwhile, the ruins of the two cottages were left abandoned.

During the 1930s, the site's east wall, along with an original fireplace, was demolished as part of a road-widening scheme, with a new, re-positioned wall built in its place. With the outbreak of World War II, an air raid shelter of reinforced concrete was constructed against the south wall. As a major target, Portland and its naval base saw 48 air raids over the course of the war. The council began using the site as a storage yard in the 1960s, which saw concrete and tarmac laid across the ground. A concrete plinth was used for the storing of sandbags, while part of the east wall was removed to allow for the parking of lorries. The council also erected public conveniences at the northern-end of the site around the same time.

Plans for and transformation of site into a garden
For a number of years, the local residents of Chiswell had called for a community space within the village. In 2002, the approval of the Baker's Green housing estate prompted further calls for a green space to be retained. A group of local residents formed Chiswell in Partnership with the Sea in 2003, which was soon re-named Chiswell Community Trust. After finding a suitable plot of land, they applied for a grant from the Countryside Agency to help secure and transform it into a green space. The agency's Doorstep Greens initiative had been launched in 2001 to encourage small green spaces to be transformed into community gardens or parks, which would be maintained by a local trust. With the grant successfully obtained in October 2003, Chiswell Walled Garden was one of twenty-five Doorstep Greens' projects to be authorised in the south-west region that year. The Countryside Agency also supported the Trust in securing a 30-year lease for the site from Weymouth & Portland Borough Council at a cost of £5,000.

The Trust's planning application to turn the yard into a community garden was submitted in March 2004 and approved in June. By this time, £87,000 had been raised by the Trust for the project, and work soon began on the site. Most of the voluntary work was undertaken by local residents, although builders were also called in to remove the council's 20th century installations. In September, work started on removing the layers of concrete and tarmac, along with the air raid shelter and public conveniences. By the beginning of 2005, the 20th century render was being removed from the north wall, which led to the unexpected discovery of the wall's early 17th century origins. Surviving doorways and mullioned windows were uncovered and work by the builders was temporarily stopped to allow English Heritage to carry out an assessment. The discovery led to the Trust's attention turning to excavation work for a period of time. Further evidence soon followed of a second dwelling adjacent to the first, while stone hearths, paving, drains and fragments of glass and pottery were also found.

Work on transforming the site into a garden came to a halt in April 2005 when disagreements developed between the Trust and the borough council. The discovery of the historic wall led the Trust to change the locations of the garden's approved doorways. The Trust opposed inserting a door into the historic wall, while there were also fears it would become unstable if the original plan was carried out. However, the amended plans resulted in the council claiming that a breach of planning control had occurred. They believed the new positions caused a loss of natural surveillance and raised other safety concerns, particularly regarding an escape door. With the threat of enforcement and termination of the lease, the Trust submitted an amended plan to the council that April, but this was refused in June.

After further negotiations, and fears that the project would have to be abandoned, the council and Trust came to an agreement by 2006. In the end, two escape doors were installed in the east wall and two doors in the north wall, including the main entrance. Meanwhile, work to transform the site into a garden was able to continue from late 2005 onwards. In September, further funding of £22,358 was received from the Local Heritage Initiative, allowing the surviving walls to be restored and re-pointed using lime mortar, which took a few months to complete.

Due to the site's coastal environment and the risk of flooding, the Trust had sought advice from professional gardeners and designers, including Penelope Hobhouse, on what plants, trees and shrubs were best suited for the garden. To encourage suitable local plants, gravel, pebbles and oyster shells were laid around the site, which was funded by the BBC/Big Lottery's Breathing Places programme. At the southern end of the garden, ashlar found on the site was used to form a raised bed and soil was laid there to encourage the growth of trees and shrubs. Stone paving excavated from the centre of the site was re-used to form a pathway and the South West Regional Development Agency donated some Portland stone paving to form the garden's courtyard area.

In the summer of 2006, work also commenced on a small, 16th century-influenced, wattle and daub garden shed, which was funded by a £5,000 grant from the Big Lottery Fund's Awards for All. It was built primarily as a storage facility and was completed in January 2007. Local timber was sourced from Bulbarrow Timber Mills and hazel hurdles from the Dorset Coppicing Company. The mud used in the shed's construction was covered in lime render afterwards. The "living roof" on top was created as a gravel garden to grow plants. When a common pipistrelle bat was discovered briefly roosting in the shed in November 2006, it was given the name "The Bat House".

Work on the garden was declared complete in December 2006, except for the re-pointing and capping of the north wall, which was later carried out in 2007. As part of the 2007 Weymouth Civic Society Annual Awards, the walled garden received a special award. It was described by the society as being "charming" with "attractive planting". In 2008, the garden, along with the nearby land sculpture Chiswell Earthworks, was awarded a Green Pennant, which recognises community and charity-run public spaces under the Green Flag Award scheme. The award was one of seventy-two to be handed out nationally that year. Another Green Pennant was received for both sites in 2009.

Since its completion, the garden has been a popular space for visitors and community events. One notable event was a week-long exhibition held in August 2008. The event featured a number of sculptures on display by sculptor John Maine, who had previously created the nearby Chiswell Earthworks between 1986-93. 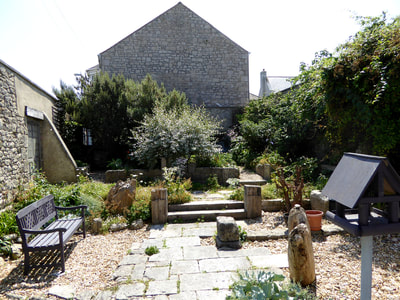 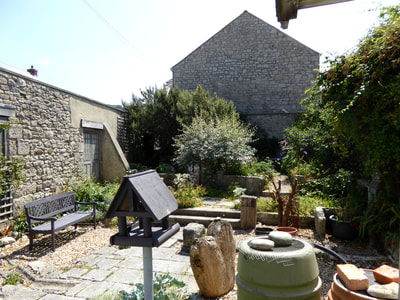 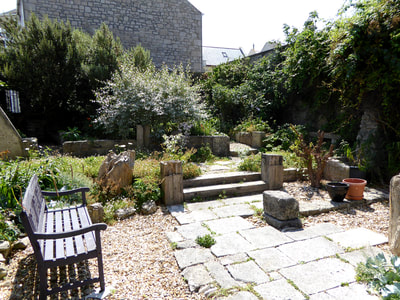 The garden has a variety of plants suited to the site's proximity to the coast. 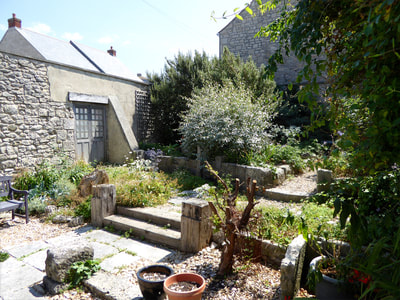 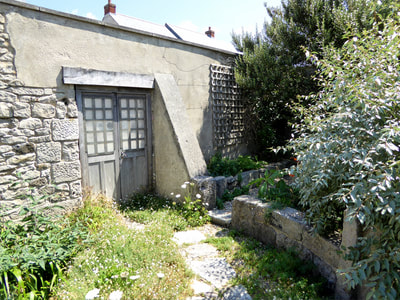 The remains of the 17th century dwellings are still evident. 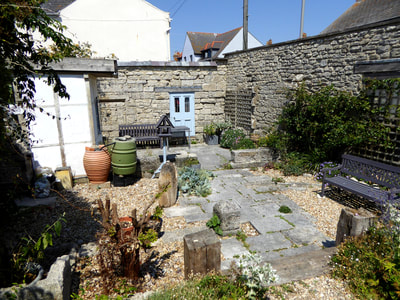 The garden from the other side. 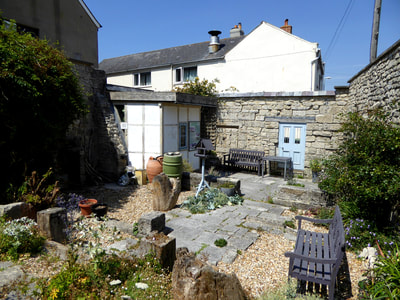 The Bat House is seen here on the left.

The entrance to the garden at Lerret Ope.