Church of Our Lady and St. Andrew 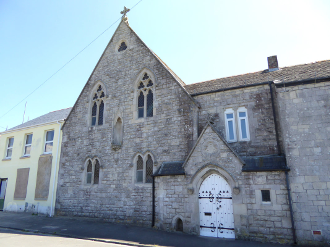 Church of Our Lady and St Andrew is a former Roman Catholic church of 19th century origin at the Grove. The church is now in private ownership, following its closure in 2007. In recent years, it has been designated an Important Local Building.

The church was not the only Catholic place of worship on the island. In 1939, the Admiralty erected Portland's second Roman Catholic chapel, Our Lady Star of the Sea, on the edge of Victoria Square, which remained in use until 1979. Although it was primarily built to serve personnel of the Royal Navy, Underhill residents of Catholic faith also frequently used the chapel.

History
The Church of Our Lady and St Andrew was established as the result of the growing Catholic community seen on Portland from the mid-19th century. The period saw large increases to Portland's population in connection with the creation of a harbour of refuge and its associated works, along with the establishment of Portland Prison. In order to provide a place of worship for those of Catholic faith, a small Chapel of St Mary was established at the Grove. A priest from Weymouth, originally Lawrence Smythe, held a service there every two weeks, while a mass centre was also established on the island in 1856 in the home of William Lyle Smith.

Later in the 1860s, Portland Prison began to receive many Irish Fenians prisoners, prompting the government to appoint the Catholic Chaplain George Poole, who was provided with a residence close to the temporary chapel. He ministered to prisoners inside the prison and also to Catholic warders, soldiers from the Verne Citadel and others in the temporary chapel. As demand for Catholic services continued to increase, Poole proposed the construction of a permanent place-of-worship and began fundraising for the cause. The new church was built during 1868 for a cost of £640. Designed by the architect Joseph Hansom and built by the local builder Mr. John Patten, the church was dedicated by the Bishop of Plymouth, William Vaughan to St. Mary and St. Andrew.

Poole became the church's first Priest in Charge. Over the course of its religious use, eighteen priests served at the church, with two assistant priests operating at separate times from 1868 to 1873, when Poole was the parish priest. From the late 19th century and well into the 20th century, the church's main offering revolved around two Sunday services. Sailors would have a service at 9am, while another would follow at 10:30am for military personnel and civilians.

During John Rufus Wincott's time as priest between 1877-81, some money was collected towards the construction of a chancel and a font for the church. Wincott also purchased additional land to make room for the chancel in 1881. Following his death that year, this land was gifted by his mother for the benefit of the Portland Mission in 1883. A temporary sacristy was created later in the year under the new parish priest, Walter Keily, until the new chancel could be built. A font was installed in the church during this period and used for the first time on 31 August 1884.

In the late 1970s, an altar from Buckfast Abbey was installed within the church. Following the departure of Peter Coxe, the last priest of Portland's parish, in 1996, the parish was served by St Joseph's in Weymouth. At the time, a lack of priests in the diocese made full continued use of the church unfeasible. In addition, the building was found to be in need of extensive repair and suffering from dry rot. The use of the church was then reduced and for some years, Sunday Masses were celebrated at the Avalanche Memorial Church in Southwell.

The last service to be held at the church was in 2007 and on 27 March 2008, Christopher Budd, Bishop of Plymouth, announced the decision to unite the parishes of Our Lady & St Andrew, Portland, St Augustine, Weymouth and St Joseph, Weymouth, to form a new parish, Our Lady Star of the Sea. With this announcement, the church on Portland was then sold in 2010. 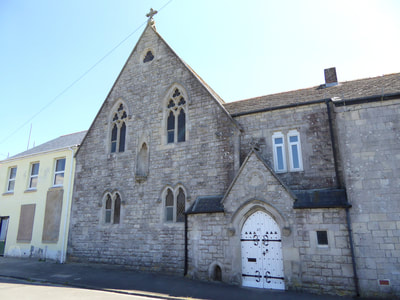 The former church as seen today. 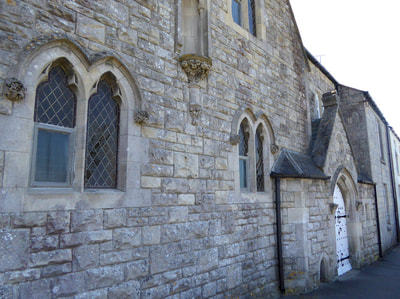 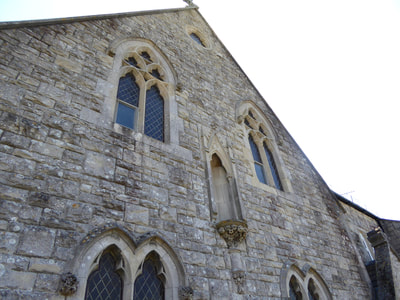 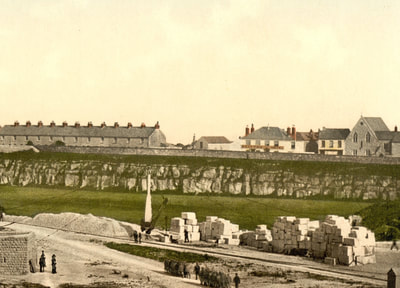 This late 19th century photograph shows part of Grove Road with the chapel to the far right. (Photo from the Photochrom Print Collection: lccn.loc.gov/2002708056)