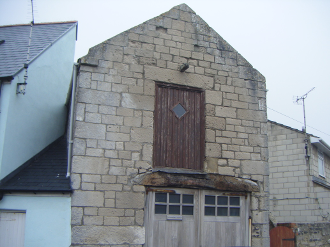 The lodge has been a Grade II listed building since May 1993. Described by Historic England as a "rare surviving example of its kind" on the island, they added that it has "historical interest in tracing the development of non-conformity which was an important factor in Portland's social history".

The two-storey building has a long, narrow shape, and is built with a squared and dressed stone front, and rubble returns. The roof is of corrugated asbestos cement sheets. The ground floor has a 20th century entrance, with a loading bay door above, providing access to the first floor. This upper level is accessed by a flight of steps on the southern side of the building.

History
Portland's original Methodist following was established in 1746 when Rev. Charles Wesley visited the island and stayed at the home of William Nelson. Although the society dissolved after Nelson's death in 1770, the arrival of Methodist preacher Robert Carr Brackenbury to Portland in 1791 saw a new, larger following formed, with the assistance of George Smith. Brackenbury had a small chapel built at Fortuneswell in 1792 and purchased a house at Wakeham in 1794 for use as a chapel to serve Tophill.

By the early 19th century, rumours began to circulate that some of Portland's Methodists were believers in Witchcraft. The minister at Portland, Rev. Francis Derry, was tasked with investigating the allegations and began questioning each member of the local congregation in 1816. During his inquiry, Derry expelled approximately fifty individuals, which included some prominent members of Portland's society such as the preachers Charles Whittle and Robert Hinde. In response, these individuals established their own chapel in a workshop/store building at Chiswell, which later gained the name Conjurers Lodge.

The chapel was located on the upper floor of the building, known as the Long Room, which was reached by an external staircase. The new place of worship remained active for ten years, during which time the expelled members of the congregation showed "much bitterness of feeling" over their circumstances, but hoped an invitation to rejoin the society would eventually be made. Meanwhile, the main congregation suffered from the drop in numbers and the loss of some of their important members, who had all helped in maintaining and growing Portland's Methodist society.

During this time, Portland received a new minister, Rev. James Dunbar, who gave his advice to fellow society members over the existing situation on the island. In 1826, Rev. Dunbar, along with two prominent local Methodists, Mr and Mrs Gibbs, attended the annual conference at Bristol's New Room "for the purpose of consulting how best to effect a reconciliation".

Shortly after, on 3 July, a meeting was called on Portland by Robert Brackenbury's widowed wife, Mrs Brackenbury, "to consider the desirability of readmitting Charles Whittle and others into [the] Society". With the assistance of Mr Brackenbury's former friend Squire Roberts, it was agreed that all expelled members of the society would be welcomed back and this offer was "instantly accepted". The unification ended "years of anxiety and struggle", while the Sabbath services held in the Fortuneswell chapel on 9 July were well-attended. Mr W. Lowman of Southwell recorded at the time that the reconciliation "brought to an end the unwilling and unhappy separation of those whom most admitted were a sincere though mistaken people."

Speaking of the event in his 1898 book Methodism on Portland, Robert Pearce commented: "Superstition and the belief in witchcraft had so possessed the minds of the people that indeed very serious injury was being done through this belief. Almost every event was supposed to be regulated by this evil power, and every misfortune was attributed to the witch. It does appear that a firm policy was necessary to deal with this mischievous superstition, but we are obliged to question the wisdom of the high-handed treatment it received at the hands of Mr. Derry."

It has since been suggested that the majority of those who were banished from the congregation were probably not believers of witchcraft in any case. Although there may have been a small minority who were involved in witchcraft, their activities would have probably been kept behind closed doors. At the time, the Witchcraft Act of 1735 meant there were strict penalties for the pretence of witchcraft. A person who claimed to have the power to call up spirits, foretell the future, cast spells or discover the whereabouts of stolen goods, was to be punished as a vagrant and con artist, and subjected to fines and imprisonment. The act remained in force in Britain well into the 20th century, until its eventual repeal with the enactment of the Fraudulent Mediums Act of 1951.

After the unification of Portland's Methodist society, Conjuror's Lodge returned to use as a workshop and store. The Long Room was briefly used for religious purposes again during the 1850s by the Primitive Methodists. Portland's society was established by the missionary Thomas Russell, who visited the island in 1838 and based his mission in Chiswell. A store house was converted into a place of worship, known as Ranter's Chapel, but as the congregation increased, services were removed to the larger Long Room. The 1851 Religious Census records the name of the place of worship as the "preaching room", with free sittings for 72, other sittings for 78 and standing room for a further 40 people. The average attendance of services around this period was 130 in the afternoon and 170 in the evening. The society's first purpose-built chapel was opened nearby in 1858.

In 1973, Portland Joinery moved into the building, using it as a workshop. The business had been established in Weymouth in 1958 and became known as James Wilson & Son in 1962. After Roger Wilson acquired the workshop, the firm was later renamed Portland Joinery in 2002. The company vacated the building in 2003 and relocated to new premises nearby at Pebble Lane. In August that year, Wilson submitted a planning application to convert Conjurers Lodge into a dwelling and although the plans were approved, no conversion work was carried out. To date, the building remains in use as a store. 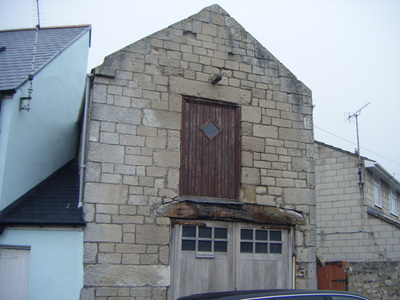 Conjurer's Lodge as it looks in 2015 - the doors of the two levels evident in the facade of the building. 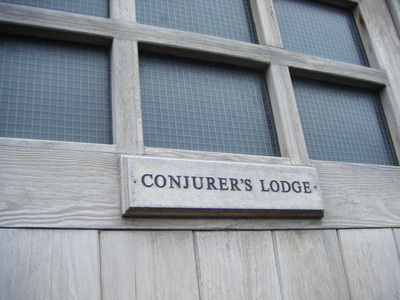 The plaque of the building on the ground floor, 20th century doors. 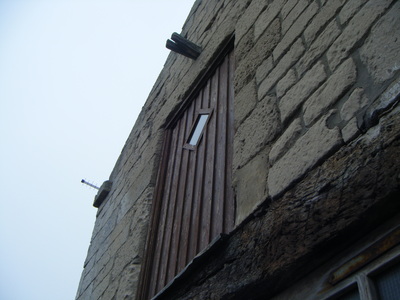 A closer look at the first-level loading bay door. 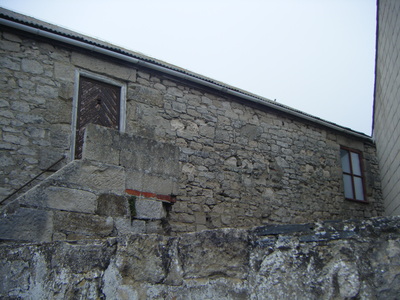 A look at the side of the building. 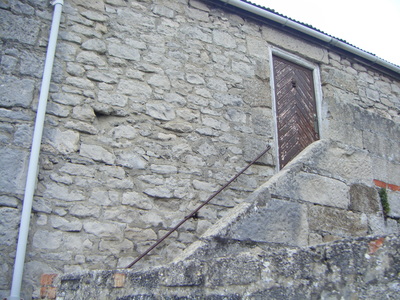 A closer look at the side doorway, and the steps leading up to it. 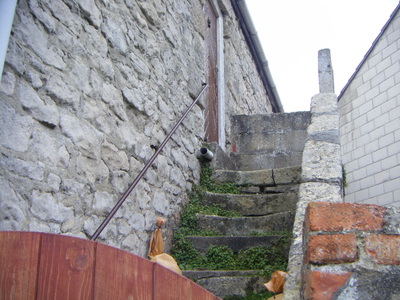 The chapel was reached up these external stone steps.