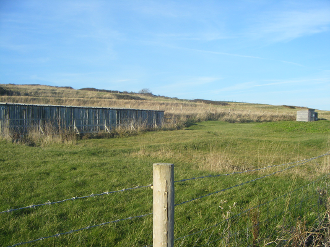 Culverwell Mesolithic Site is a former Mesolithic settlement and archeological site at Culverwell, between Southwell and Portland Bill. It was maintained by the Association for Portland Archaeology, who held open days there during the peak season for a number of years. In 2004, the site won the archaeological "Pitt Rivers Award". In 2022, the site was backfilled for preservation reasons.

The fields between the Bill and Southwell are made up of a strip field farming system, dating from Saxons times, and once common across Tophill before quarrying and housing destroyed them. Culverwell Mesolithic Site has become a scheduled monument under the Ancient Monuments and Archaeological Areas Act 1979. This scheduled status includes open fields to the south, spanning from Cave Hole area to the Old Lower Lighthouse. In addition, two other areas of open fields have become scheduled under a separate entry; one spans east from the Old Higher Lighthouse, while the other runs north-east of the Culverwell site, alongside Portland Bill Road.

Background
The Mesolithic site at Culverwell is around 8,000-8,500 years old and was excavated in stages between 1967 and 1996. Some academics claim that Britain's Mesolithic population was below 5,000. The site at Portland is believed to have accommodated approximately twenty inhabitants, who would have lived there for at least 20-25 years. For accommodation, it is likely that four or five huts, made of stone or branches, were erected.

The inhabitants' diet was likely to have consisted of molluscs and plants, with the addition of occasional meat. Water was sourced from the nearby Culver Well, while stone for producing tools would have been sourced from the exposed cliffs along the nearby coastline. During the Mesolithic period, the sea was approximately 300-400 metres further out than it is presently.

After years of studies and excavations at Culverwell, Susann Palmer of the Association for Portland Archaeology published the book Culverwell Mesolithic Habitation Site: Excavation Report and Research Studies in 1999.

In 2021, Palmer made the decision that the site should be backfilled to preserve it and avoid further deterioration by weather and wildlife activity. The decision received the support of the Association for Portland Archaeology and Historic England, with the latter offering a grant to cover the costs of a detailed survey of the site and its backfilling. The survey commenced in February 2022 and the backfilling is expected to be completed at the end of March 2022.

Features
The main feature of the site is a limestone slab floor, which covers a shell midden (rubbish dump) that was created in a natural gully. Not only unique for the period, the floor is the earliest known structural evidence in England for the use of Portland stone on a living site. Other surviving features include the remains of a low wall within the southern region of the site, four hearths east of the stone floor and a pit, which was probably used for cooking. Large numbers of stone tools have also been found on the site, the most common of which are microliths, scrapers, knives, chopping tools, pounders and picks. A reconstructed dwelling hut was built on the site for the benefit of visitors attending open days.

Surrounding Area
The open fields in the surrounding area of Culverwell contain the surviving features of a strip field farming system, traditionally used on the island as far back as Saxon times. These strips run in parallel lines across the fields between Southwell and Portland Bill, and were once common across Tophill before modern development destroyed them. The spring at Culverwell, located near to the Mesolithic site, remains an open running stream, traveling 300 metres east across fields through a gully and terminating as a waterfall on the cliff edge of the coastline. 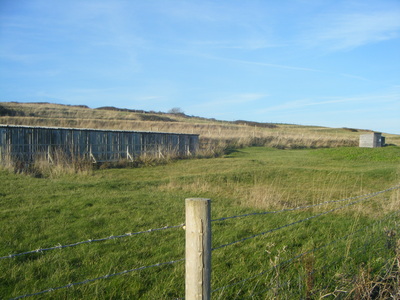 The Culverwell Mesolithic Site as seen from the road side of Portland Bill Road. 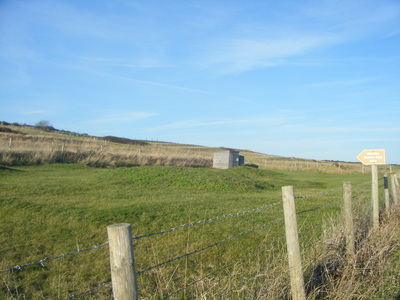