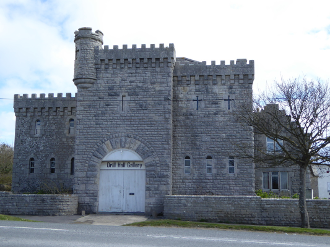 The Drill Hall is the former headquarters of the Portland Volunteers at Easton Lane, north of Easton, built in 1867-68. Today it is the home of the Portland Sculpture & Quarry Trust and is known as the Drill Hall Gallery and Stone Workspace. The building (including its boundary walls, mounting blocks and adjacent workshop) has been Grade II listed since March 2016.

Since becoming the Drill Hall Gallery and Stone Workspace, the hall is frequently open to visitors during the peak season. It hosts community events and is used as an arts, science, research and project space for the presentation of a range of creative works from installations, live performance to artists talks.

History
Establishment of the Portland Volunteer Corps
The Rifle Volunteer Corps was established in 1859 as a citizen army, incorporating part-time rifle, artillery and engineer corps. With widespread fear of a war with France, this reserve army quickly flourished and by the end of 1860, over 120,000 men had volunteered to join the Corps in the UK. To accommodate these volunteers, drill halls were built across the UK during the 1860s. They were established as headquarters for each local Corps to practice and perform military drill, and provide secure storage for weapons. The halls were often funded by benefactors or public subscription and approximately 350 drill halls were constructed during the 19th century, of which 150 survive today. As of 2015 approximately 1,500 drill halls remain in existence across the UK, while most present regiments of the Territorial Army Infantry, Artillery, Engineers and Signals units are directly descended from the Volunteer Force units that trained in these halls.

Portland's Artillery Volunteer Corps was established in 1860, largely due to the efforts of Captain Browne. Portland's Corps were formed into two groups, both of which had their own drill stations - one was the Clifton Hotel at Grove and the other was the Reading Room at Straits. The first officers consisted of Captain Browne, Lieutenant Freeman, and Lieutenant Eliot, with Charlie White as first sergeant and the Benjamin Collins as first sergeant-major. From their establishment, the Portland Corps had a lengthy and commendable career as "The Dorset Stalwarts No 4.", with the Portland Year Book of 1905 noting that Portland had "always taken strong patriotic interest in the Volunteer movement." This was evident in the past with the establishment of a company of Portland Volunteers in 1804, commanded by governor John Penn, as well as short-lived Corps from the mid-19th century, which was linked with the construction of the breakwaters for Portland Harbour.

Construction of Drill Hall and use by the Corps
After a few years of drills at the hotel and reading room, the Portland Volunteers formed plans for the building of their own Drill Hall. The architect George Crickmay of Weymouth designed the plans for a Gothic Revival/Medieval-styled hall in 1865. Construction commenced in 1867 and the building was completed in 1868, where it was soon designated "No. 8 Company Headquarters". The hall was built with Portland stone and rock-faced rubble, with the exterior of the building featuring several arrow slits, a corner turret on the north-west corner, machicolations, a crenellated parapet and round-headed windows.

During 1867, Crickmay designed further plans for a new front range for the hall, which was to feature an armoury and orderly room. Although it remains uncertain whether this part of the building was ever constructed, the hall underwent some extension work later during 1884, when Crickmay and Sons designed a two-storey front block, which provided storage space and an armoury on the ground floor. In 1881, Britain's Rifle Volunteer Corps became increasingly integrated with the British Army following the introduction of the Childers Reforms.

By 1893, Portland's Volunteer Artillery Brigade had become the 2nd (Portland) Brigade of the Dorset Artillery Volunteers, reaching around 400 men under the command of Major McLean. The volume of men meant that three full companies were established, which itself was a considerable achievement for an area the size of Portland. The strength and interest of the Corps led to the Drill Hall being enlarged in 1900. The designs were again produced by Crickmay and Sons and the work carried out by Conway and Sons of Portland. The castellated south tower and vehicular access was added, along with an observation gallery over the hall. Aside from a larger and more spacious hall being created, new internal features included offices, a reading-room, a billiard/recreation room, a lavatory block, and accommodation for the service of the Corps. A three-bedroom cottage for the instructor, crow-stepped gables, was constructed to the south of the hall.

The Haldane Reforms of 1908 saw the nationwide branches of the Volunteer Corps become part of the Territorial Force. Despite the strong numbers at the end of the 19th century, the Portland Corps saw a decline during the following years due to the passing of more strict volunteer regulations. Around the beginning of the 20th century the Corps had dropped down to two companies, and a few years later had become one company, made up of a little more than 100 members.

During the early 20th century, some further development work at the hall was carried out, including the addition of a new single-storey toilet block on the south-east corner and a single-storey lean-to at the eastern end of the building. A group of six accommodation blocks were also erected to the west of the hall, providing much needed accommodation for the strong numbers of volunteers. However, with the declining numbers during that period, the blocks were demolished by the end of the 1920s, making way for the expansion of the nearby Independent Quarry.

Post-Corps use by Royal Navy and community
During World War II, the hall was largely used by the local Home Guard unit from 1941, though it had also been used as a community venue around the same period. Many of the UK's drill halls closed following a reduction in the size of the Territorial Army after the war. While many were demolished or sold and converted, Portland's hall continued to be used as the local TA centre, and was later acquired by the Royal Navy. For a number of years, the hall was then primarily used as a store, while office space was set-up for the administration staff who were responsible for the local Royal Navy Married Quarters. During the 1950s/early 1960s, the hall's courtyard was partially developed with the erection of a pre-fabricated concrete building, which the Ministry of Defence constructed as a garage to service military vehicles and lorries. Also during the 1960s, a hut was erected alongside the building, which has been continually used by Portland's army cadets corps since.

Aside from, and after, its post-war military use, the hall had a variety of other uses including as a community centre, a dance hall and venue, as well as being home to a youth club and playschool. In 1998, the local stone firm Albion Stone acquired the building. During August 1998, the firm submitted a planning application to Weymouth & Portland Borough Council, which was approved in October to change the building's use into an office. The main hall was used for storage, while the front range and attached house became offices. At the time, Albion Stone's Independent Quarry was one of the firm's primary working sites, situated close to the hall.

Drill Hall Gallery, Studios and Stone Workspace
In 2003, Albion Stone invited the Portland Sculpture and Quarry Trust to establish themselves within the building. The trust had been formed in 1983 when the Tout Quarry Sculpture Park was created. The Trust was established to preserve knowledge and understanding of all aspects of Portland stone and its landscape by running a yearly programme of workshops for colleges, schools, groups, young people and the general public. In May 2003, the trust submitted a planning application to change the use of the drill hall into an Educational and Interpretation Centre for Arts, Heritage and Environment. After being approved in January 2004, the trust was able to establish their centre, with the hall being used as a gallery and carving workshop.

Since basing themselves there, the trust have continued to develop the hall into an education centre, known as the Drill Hall Gallery, Studios and Stone Workspace. In October 2010, the trust submitted a new planning application to transform the former MOD garage into a Community Stone Workspace. Alongside the drill hall, plans were announced in 2009 for the re-landscaping of Independent Quarry for educational purposes. The leaseholders Albion Stone are to work in partnership with the trust to transform the quarry into "a walk through time, with a series of 'geological rooms' as the visitor climbs up from the bottom of the quarry." The plans include an amphitheatre space, a geological viewing tower and a site-specific sculpture by Peter Randall-Page, while wildlife will be encouraged to regenerate there. However, the quarry transformation has yet to take place as of 2019.

Design
The drill hall is built with Portland stone and coursed rubble using ashlar dressings, as well as having roofs made with slate. The building is aligned east-to-west using a "T-shaped footprint", with the hall to the east and the former instructor's house to the south.

In the Portland Year Book of 1905, the Drill Hall's facade was described as "very handsome elevation in dressed Portland stone, with castellated towers, &c. The structure is one of the most picturesque and attractive on the Island." Eric Ricketts, in his 1979 book Old Buildings of Portland, noted: "It is impossible to miss the Volunteer Drill Hall, commenced in 1868 and enlarged in 1900. The facade is presumably of the later date, and is an extraordinary confection of turrets, crenellations, cruciform loops, and other medieval nonsense, all beautifully built." In a 2015 publication on Drill Halls, Historic England noted that Portland's example was a "fine example of the Gothic Revival/medieval style".

In 2016, the Drill Hall became a Grade II listed building. Historic England noted the reasons for designation as being based upon architectural interest, historic interest, association with designer George Crickmay and its level of intactness. They commented: "The buttressed drill hall and castellated front elevation contribute to the strong medieval style that emphasises the building's original military function, with the later more elaborate additions illustrating the increasing attention given to drill-hall design. Its continuing operational importance and developing requirements are evident in these subsequent extensions. The overall original plan and function of the building is still clearly legible." 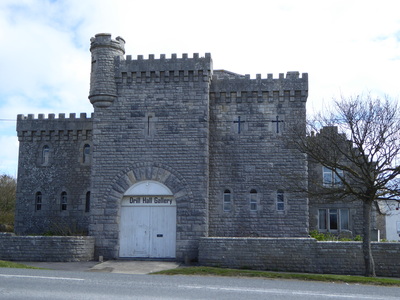 The impressive facade of the Drill Hall. 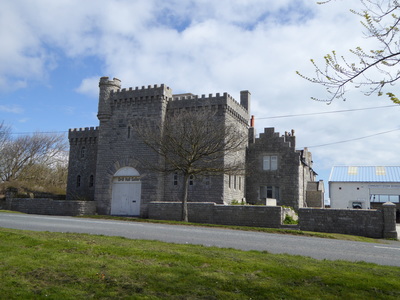 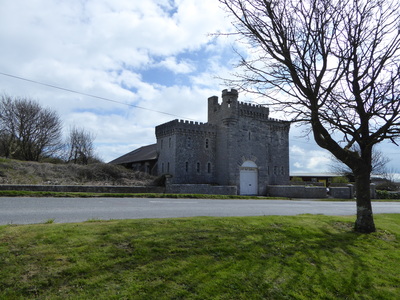 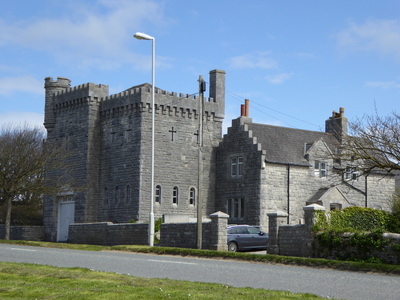 The extension on the right is the instructor/caretaker's cottage, built around 1900. 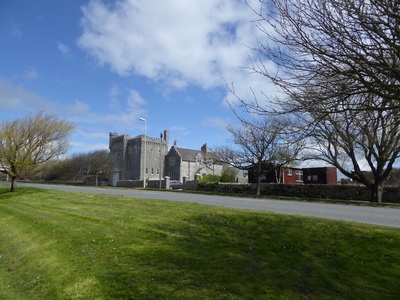 The Drill Hall as seen from further down Easton Lane. 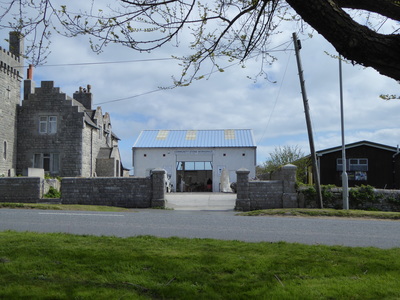 This building was built during the 1950s/60s as a Ministry of Defence garage. It is now the Community Stone Workspace. 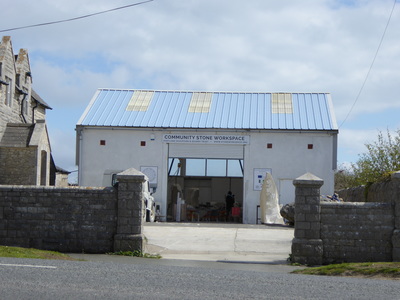 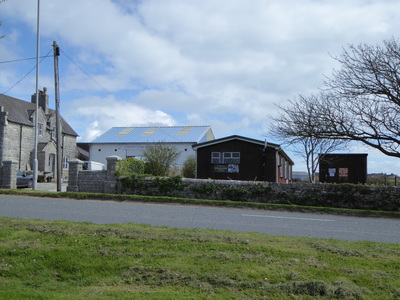 The hut was erected during the 1960s as home to the Portland's army cadets corps. 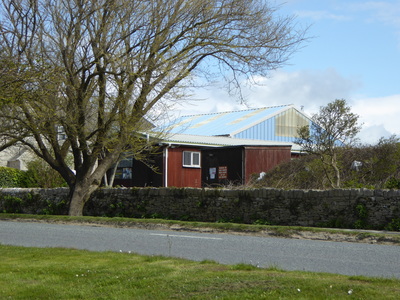