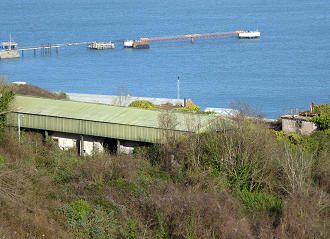 East Weare Camp is a former provost prison (and later detention barracks) of mid-19th century origin at East Weare and overlooking ﻿Portland Harbour﻿. It is located east of the Verne Citadel and above B Battery (of the East Weare Batteries). The site is the private property of Portland Port Ltd and has not been opened to the public. The camp has been a Grade II listed building since September 1978.

History
Establishment of detention barracks
In the mid-19th century, the government approved plans for the transformation of Portland Roads into a harbour of refuge with the construction of two breakwater arms. The commissioning of the harbour was prompted by concerns over the security of the English Channel, fears of a French invasion and the development of Cherbourg Harbour. In order to protect the harbour, which began to be increasingly used by the Royal Navy, a number of defences and fortifications were constructed, including the Verne Citadel and its associated batteries at East Weare.

In connection with the increased Army presence in Portland area, the construction of a military provost prison at East Weare was authorised in 1866. It was built exclusively by convict labour and was completed around 1869. In 1869, Portland Prison's governor commented: "I feel justified in stating that the provost [and other works at the Verne and East Weare] bear the closest inspection, and satisfactorily prove that convicts are capable of executing any description of work, when directed by skilled and intelligent officers." In order to provide access between the Verne and the prison and batteries at East Weare, convicts excavated a deep cutting on the south-east side of the citadel in 1872-73, which formed a communication tunnel leading to a sally port.

The provost prison was built with Portland stone, with its roofs covered in slate. As a walled enclosure, a courtyard was laid out at its centre. On the north-east side, facing seaward, a flat-roofed cell block contained ten single cells, along with a prisoners' room and room for the night officer, with toilet and bathing facilities provided nearby in a corner bastion. The south-west side, facing landward, contained accommodation for the provost prison's staff, including a living room, bedrooms, toilets and a scullery. A cook house, store room, provision store and coal store was also included on this side, as was the main entrance, which was flanked by a verandah on each side. The south-east side of the courtyard contained a stone breaking yard and boiler house. The prison was designed to be self-defensible, with its two corner bastions and numerous iron-plated musket slits.

From 1903, the prison was classed as a branch detention barracks. It was used for the imprisonment of all troops at Portland, Weymouth and Dorchester who had sentences not exceeding fourteen days, to save sending them to the military prison at Gosport. In 1905, the prison was given the additional role of headquarters of East Weare Batteries, which required a fire command post to be constructed above the cell block. The detention barracks briefly closed when the 2nd Battalion, Royal Warwickshire Regiment departed the citadel in 1906, but they had reopened by 1908. In the 1911 Census of England and Wales, it is listed as "military detention barracks", but would have closed for the final time shortly after, prior to World War I.

Interwar, World War II and post-war use
After its use as detention barracks, the former prison continued to be used in connection with East Weare Batteries. During World War II, it was also designated a control station for controlled minefields laid off the seaward side of Portland Harbour's breakwaters. The first mines were laid in May 1941 and were in operation by the beginning of September that year.

After East Weare Batteries were decommissioned as a coastal defence in 1956, the War Office handed over the site, including the former detention barracks, to the Admiralty. During their early use of what became known as East Weare Camp, part of the barracks were converted into a signal station connected to HMNB Portland. A red and yellow-coloured tower, with an adjacent flagstaff, was erected at the former barracks as part of this new role.

Use as part of DISTEX site
After being acquired by the Royal Navy, A and B Batteries found a new role as a Disaster Relief Exercise site (DISTEX), which formed part of the Flag Officer Sea Training. This organisation, established at Portland in 1958, was responsible for ensuring all Royal Navy and Royal Fleet Auxiliary vessels were fit to join the operational fleet by testing the crew's readiness through a series of drills and exercises, including war-fighting scenarios and emergencies. The DISTEX site was regularly used for disaster relief training, which included handling fires and providing aid to 'wounded' civilians. Aside from Royal Navy vessels, the navies of other NATO countries would also take part in the programme.

East Weare Camp was also used as part of the DISTEX site. It made an ideal headquarters as part of the exercises and often played the role of a makeshift hospital, with 'wounded' civilians being taken there. It would also be the site of a field kitchen for the ship's companies. Many ship tags survive within the camp, dating from its use as part of the DISTEX site. Two examples include HMS Norfolk, dated 1991 on an old fireplace, and HMS Edinburgh, dated February 1987 on a bricked-up window. The nearby East Weare Cottage (built as quarters for the resident gunners of the batteries) has two surviving 'tags' left behind by the German Navy in 1987, by the frigates Bremen and Emden.

In 1991, English Heritage's survey of the camp described it as "disused, subject to vandalism, and becoming dilapidated and overgrown". In 1995, Flag Officer Sea Training relocated to Devonport and HM Naval Base Portland closed the following year, when the harbour was sold to Portland Port Ltd for use as a commercial port. Shortly before the closure of the base, the Ministry of Defence obtained planning permission to construct a large green roof over part of the camp in January 1995, largely due to the partial collapse and dangerous condition of the existing roof. The project was handled by Building and Property Facilities.

Condition and current state
Since being acquired by Portland Port Ltd, the camp and the batteries below have become increasingly dilapidated and overgrown. When the company took over the site, some believed the area would be opened to the public. Geoff Kirby, on his Exploring Portland website, noted that the site would be "a sure-fire tourist attraction if opened but the cost of making the old buildings safe would be very high." He also commented that the batteries and camp were "being neglected and allowed to rot away" with "buildings of undoubted historical interest falling apart". He summarised the site as a "tourist attraction crying out for protection and exploitation." In his 1998 book Discover Dorset: Portland, local historian Stuart Morris noted that the site "awaits discovery by the next generation of tourists".

In 2018, an assessment by Historic England described the camp as "rare" and the "only known example of this type of small defensible barracks". They commented how the camp retains much of its original design and added: "Despite considerable dilapidation it still retains a legible layout and a substantial proportion of its principal structure."

Excellent photographs of both the camp and East Weare Batteries can seen at Andrew Blackmore's photography website by clicking here. 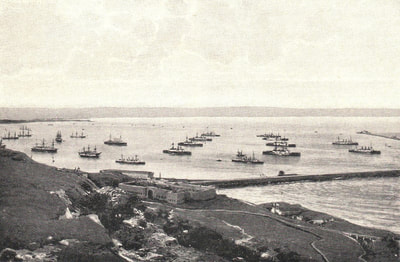 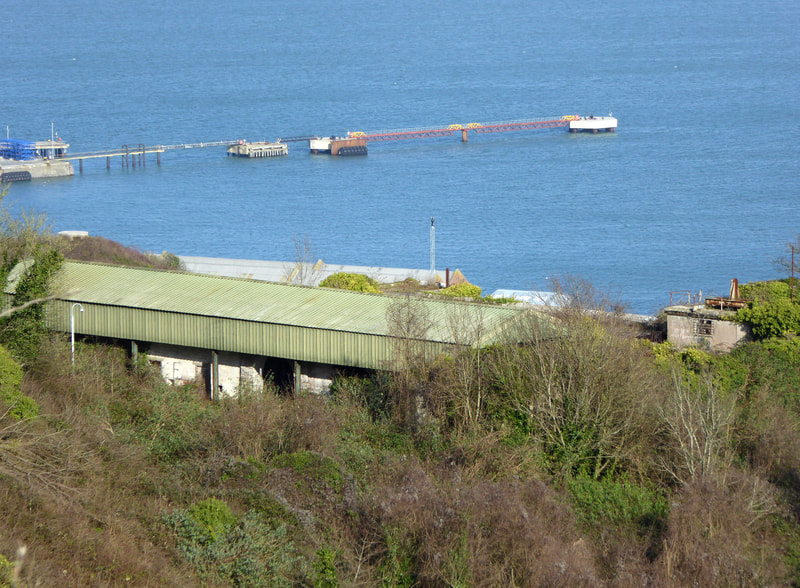 The camp's green rooftop was added in 1995 after part of the original roof collapsed. 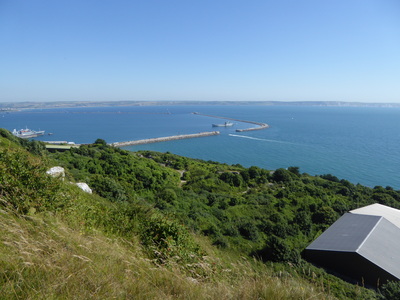 The camp can be seen to the far left here, above East Weare Battery below. 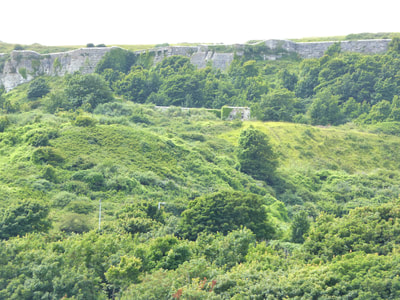 The camp, surrounded by undergrowth, seen from the sea. 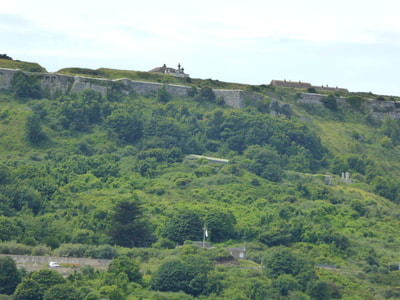 Further along the eastern coastline, away from Portland Harbour, the camp's modern roof can be seen.