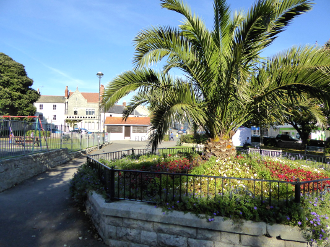 Easton Gardens is a public garden of early 20th century origin at Easton Square, within the centre of Easton. The gardens, along with Underhill's Victoria Gardens, were created to mark the 1897 Diamond Jubilee of Queen Victoria, although a series of delays and setbacks in their creation postponed their opening until 1904. In recent years, Easton Gardens have been consecutively awarded the Green Flag Award.

History
In 1896, Councillor B. Comben proposed the creation of two public gardens, one at Underhill and the other at Tophill, to the Portland Urban District Council (PUDC) to celebrate the 1897 Diamond Jubilee of Queen Victoria. A committee was quickly formed to consider the scheme and Little Common was selected as the site for Underhill's Victoria Gardens. The original site considered for Tophill was a field adjoining the Drill Hall at Easton Lane, but the land soon became part of the government-operated Independent Quarry. The council then decided to focus their attention on Victoria Gardens instead, but despite plans being created during 1897, issues between the council and the Commissioners of Woods and Forests over the grant of the common land delayed further work.

Both garden schemes were postponed further while the local authorities commenced work on a piped water supply and new drainage scheme for the island. In 1899, with the passing of the Commons Act, the council began pursuing the scheme for Victoria Gardens again, with Councillor B. Comben becoming chairman of the Pleasure Gardens Committee in October 1900. Under the Commons Act, the council were able to submit their proposals to the Board of Agriculture rather than the Commissioners of Woods and Forests. After the scheme for Victoria Gardens was approved in December 1901, further progress was made on Easton Gardens. The proposed site was now the barren land at the centre of Easton Square, which had previously been the location of the village pond and well until the late 19th century. Out of the local Ferry Bridge Fund, £956 was borrowed for the Easton Gardens scheme.

While Victoria Gardens was being created, the plans for Easton Gardens, produced by Mr. Robert Stevenson Henshaw, engineer and surveyor of the PUDC, were approved in August 1903. In November that year, Mr. F. J. Barnes of Portland began to enclose the gardens with a stone wall and iron fencing. Messrs Stewart & Sons, who had supplied the many shrubs for Victoria Gardens, were contracted to lay out the gardens, and they began work on 13 January 1904. The gardens were designed with lawns, flower beds and footpaths, with a bandstand at the centre, supplied by Messrs Hill & Smith of Brierley Hill. The overall scheme for Easton Gardens amounted to £1,316.

A few months after the opening of Victoria Gardens, Mr. Henry Sansom, Chairman of the PUDC, opened Easton Gardens on the afternoon of 10 August 1904 in the presence of a large crowd. The Portland Volunteer Band played during there the afternoon and evening, while a celebratory luncheon was held at the Jubilee Hall. The gardens were described in the Portland Year Book of 1905 as "exceptionally pretty and effective" and "superior in this respect to Victoria Gardens". It also recorded that "the wilderness and solitary place has been made to blossom like [a] rose."

In 2004, the gardens celebrated their 100th anniversary and locals donned costumes of the period to celebrate. In recent years, Easton Gardens has been recognised as one of the best green spaces in the country by being awarded the Green Flag Award, a scheme setting the national standard for parks and green spaces across England and Wales.

Clock Tower
In late 1905, Mr. Henry Sansom suggested that a clock tower be erected within the gardens. Aware of the lack of public ornaments on the island, Sansom put forward his idea at a meeting of the PUDC, where it was enthusiastically received. At the meeting, Sansom donated £21 of his own money, along with the £12 of rent he had generated from the 1905 Portland Fair, prompting others present to also subscribe. Over £100 was subscribed by council members and a decision was made in November 1905 to launch an appeal to raise further funds by public subscription. The Easton Square Clock Committee was formed to co-ordinate the project and handle the funds, and a total of £284 was soon raised from 202 subscriptions.

The clock was designed by Mr Robert Stevenson Henshaw, with Messrs Wakeham Bros of Plymouth being given the contract for its erection for £209. The required Portland stone for the tower was taken from Cottonfields Quarry and worked by masons Messrs Hibbs and Bower. The clock itself was supplied by Messrs John Smith and Sons of Derby, with the bell cast created by Messrs Taylor & Co of Loughborough. Erection of the clock commenced on 4 February 1907.

A ceremony was held on 21 May 1907, which saw Sansom unveil the clock in front of a large crowd. Various speeches were made and the public entertained with a performance from the Town and Volunteer Band. Decorations and bunting for the gardens and square were largely provided by Admiral Lord Charles Beresford. The cost of the clock amounted to £310, leaving a debt of around £25 to pay at the time of the ceremony. Following the ceremony, subscribers of the clock, and their spouses, were invited to a tea event, held by Sansom at the Jubilee Hall. A concert involving a variety of performers was held there later that evening, with the ticket proceeds going towards the remaining clock debt.

As a prominent feature in the square ever since, the clock tower became a Grade II listed monument in May 1993. English Heritage's survey noted that the clock was a Jacobethan-styled structure with Gothic details, adding: "It has hammer-dressed stone blocks with ashlar dressings and chamfered corners to tower with battered plinth; cornice to open-pedimented clock faces with finials to cornice and lucarnes to the spire."

Features
Easton Gardens was originally made up of lawns, flower beds, mature trees and the central bandstand. By the 1960s, the north-west section of the gardens had become a bowling green, the south-west section was in use as tennis courts and the south-east section contained a small playground. The bandstand was removed in 1966. The late 20th century saw a new playground placed on the former bowling green, while the tennis courts were transformed into a basketball court. The gardens still retain grassed and formal bedding areas, while picnic tables and seating have been placed within the grounds. 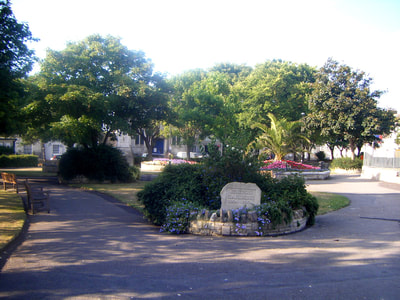 Easton Gardens as seen from the main entrance. 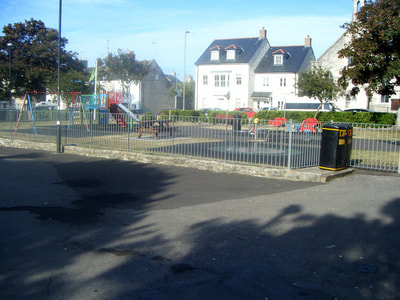 The children's play area is located to the right. 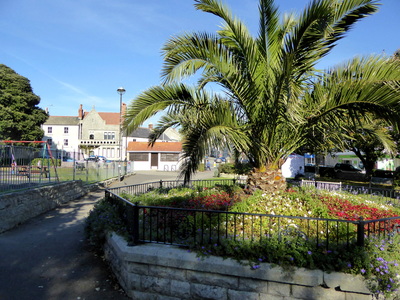 This centrepiece was once the site of the bandstand. 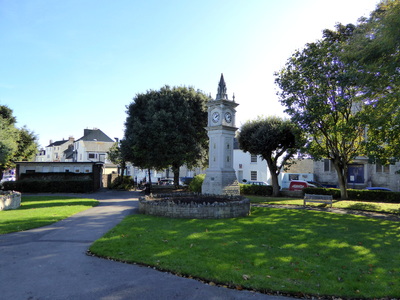 A view looking across towards the Clock Tower. 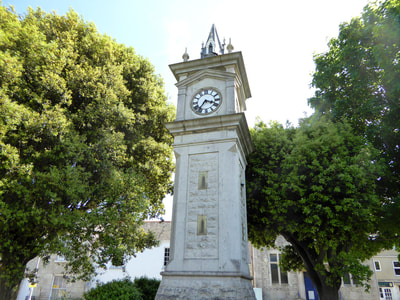 A closer look at the clock tower. 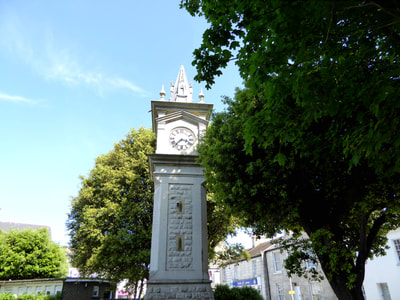 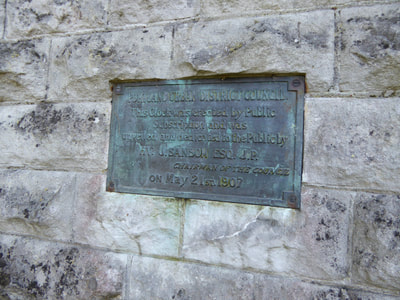 The plaque embedded in the clock's stonework. 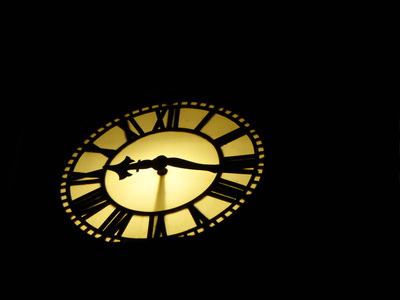 The clock, illuminated at night. 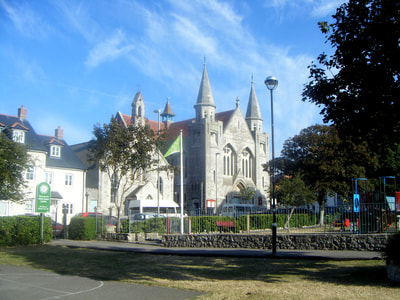 Looking across at Easton Methodist Church from the gardens. 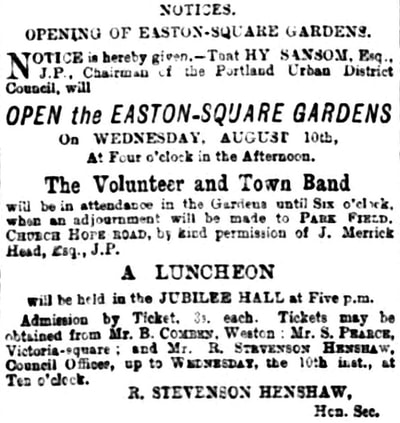 An advert promoting the opening of the gardens from an August 1904 issue of the Southern Times and Dorset County Herald. 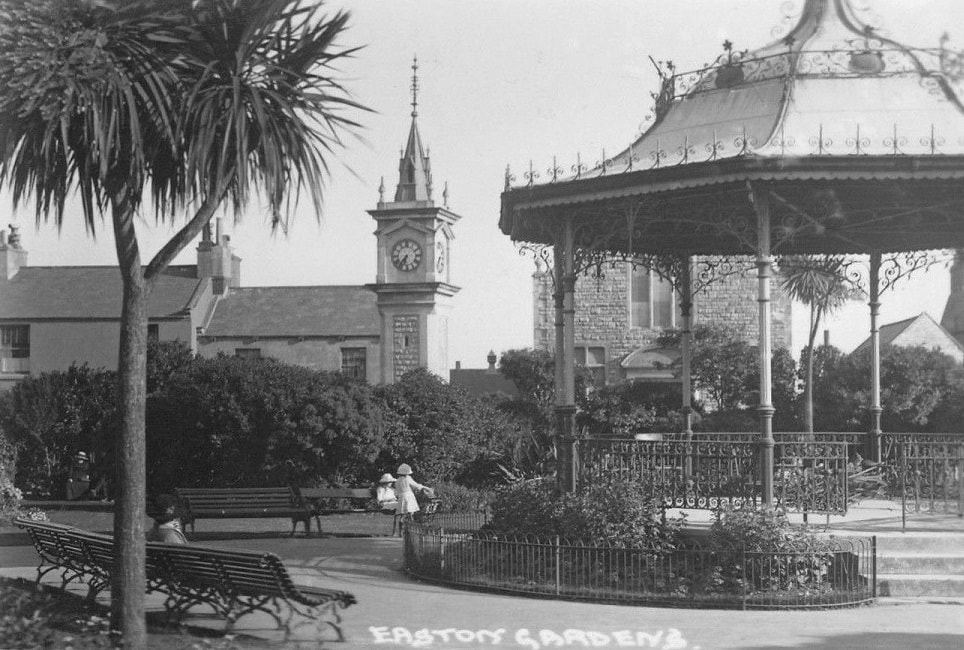 This c. 1910 photograph, taken by Edwin Seward of Weymouth, shows the ornate bandstand at the centre of the gardens. 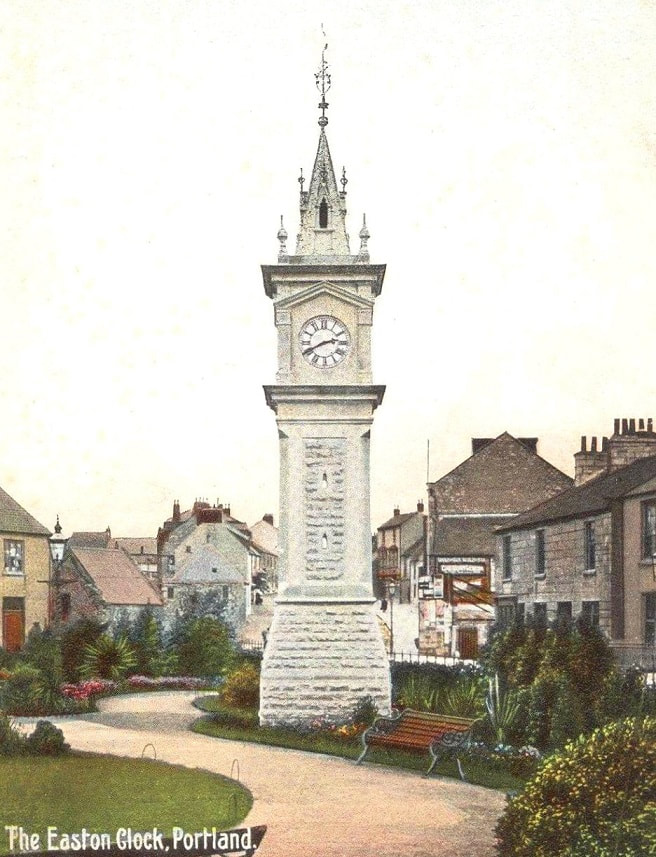 A "Kromo Series" postcard showing the clock tower in c. 1907 from its western side. Behind is Straits. 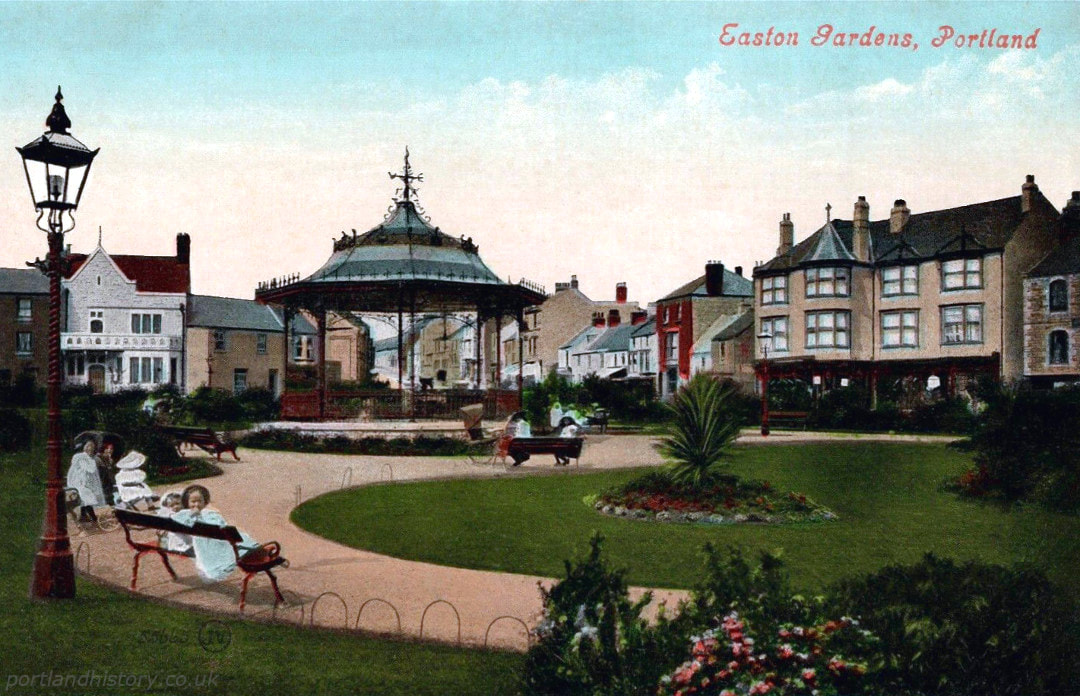 A c. 1905 postcard from Valentine's of Dundee Ltd of Easton Gardens and its bandstand. 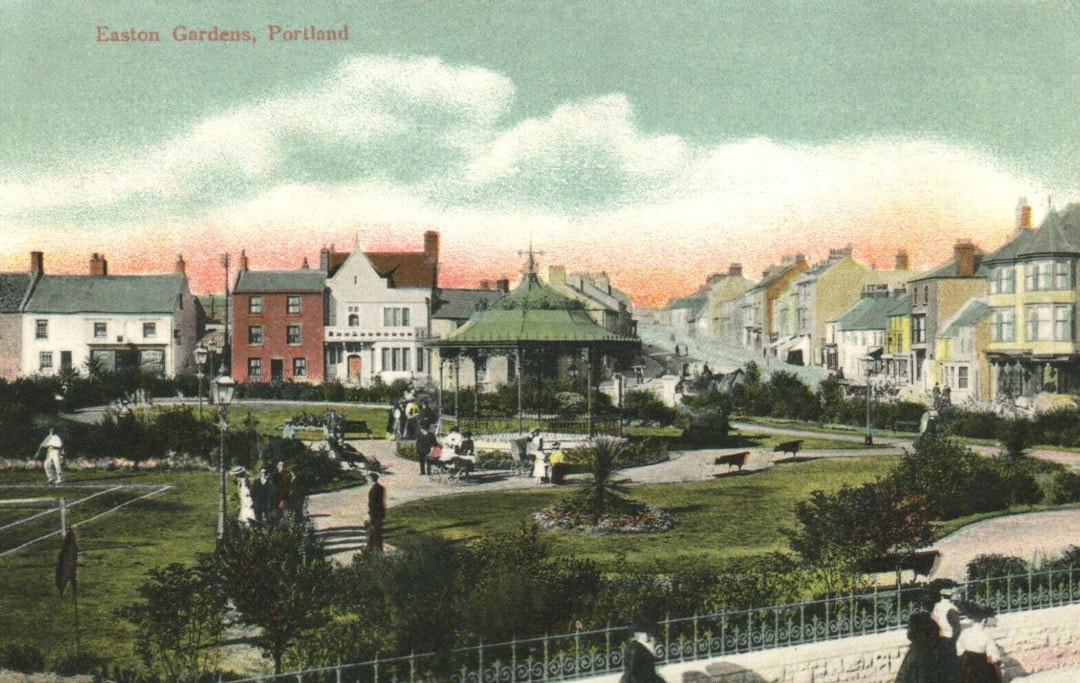 A c. 1910 colourised postcard of Easton Gardens by W. A. Attwooll of Portland. 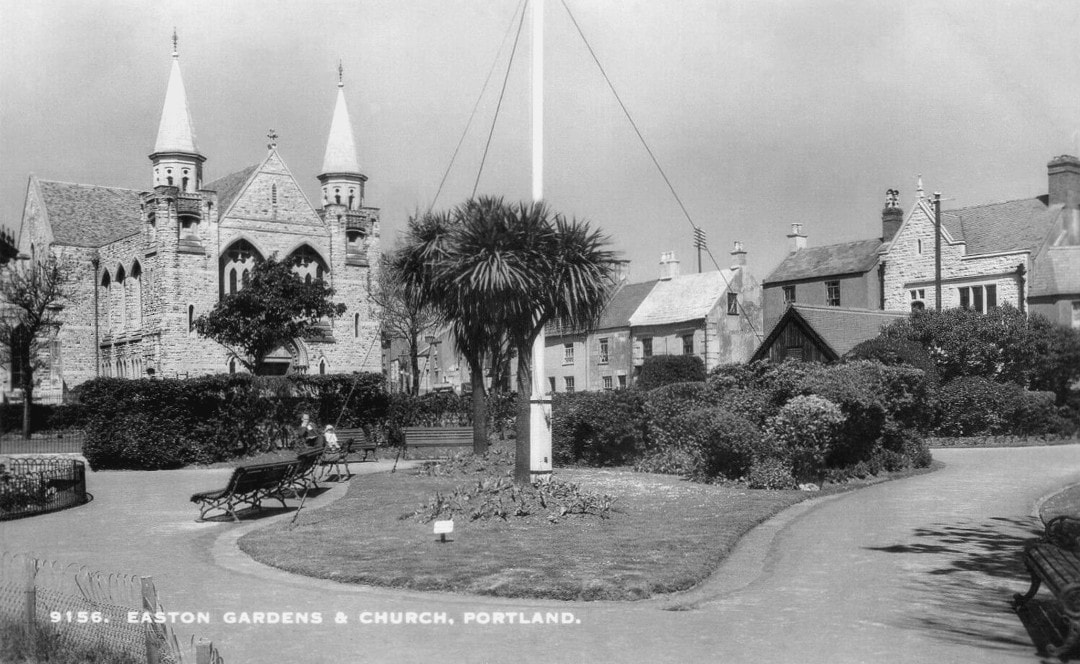 An interwar photograph of Easton Gardens, published by E. A. Sweetman & Son of Tunbridge Wells as part of their Sologlaze Series.