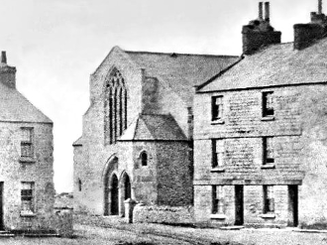 Easton Wesleyan Chapel was a Wesleyan Methodist chapel of mid-19th century origin in Easton, near Easton Square. It was built in 1854 and later served as a cinema from c. 1910, known as the Palace or Palace Theatre. The building was converted into a youth club during the 1960s and later demolished around 1986 to be replaced with three new dwellings.

History
Construction and use as Methodist Chapel (1854-1907)
Portland's Methodist circuit was established when the preacher Robert Carr Brackenbury visited the island in 1791. He had a small chapel built at Fortuneswell in 1792 and a house hired in the hamlet of Wakeham to serve as a preaching house for Tophill. The house was replaced with one that Brackenbury purchased outright in 1794, while after his death in 1818, his wife, Mrs Brackenbury, had a purpose-built chapel erected at Wakeham in 1825 to serve the growing Methodist community.

As the 19th century progressed, Tophill's Methodist following continued to increase as the area's population grew. In particular, the mid-19th century transformation of Portland Roads into a harbour of refuge, along with the various government works linked to it and the Royal Navy's increasing presence there, resulted in large increases to Portland's population and its Methodist circuit. As a result, the 1825 chapel soon became too small to serve the community, prompting plans in 1852 for the building of a new place of worship.

In 1854, a new Wesleyan Methodist chapel was constructed near Easton Square, on a plot of land gifted by Mr. and Mrs. Gibbs. The foundation stone was laid on 22 August and the chapel was built for a cost of £500, all of which had been raised through donations. Designed in the Gothic style by J. Read of Axbridge, it was able to accommodate 400 worshippers. Construction was completed by the end of the year and the opening services were held on 4 January 1855, with Rev J. Wedlock and Rev J. Woods of London preaching sermons in the afternoon and evening. Reporting on the event, the Southern Times described the new chapel as "remarkably chaste and neat in its appearance, and reflects great credit upon the architect".

Despite the increased accommodation afforded by the new church, continued growth in the attendance of services left the building to be quickly considered too small. Fundraising had begun as early as 1858 to allow the church to be enlarged and improved, with the work being carried out around 1861. Further space was still necessary and in 1863, the Wesleyan circuit at Tophill debated on whether to extend the existing chapel again or erect a new one. Funding soon began for the enlargement, alteration and modernisation of both the Easton and Fortuneswell chapels.

Easton's chapel was enlarged and beautified in 1865 and reopened by Rev. G. Maunders of London for Divine service on 12 November. Reopening services continued until 23 November, when two sermons were preached by Rev. Mark Devenport of Pontypool. The Sherborne Mercury said of the new work: "The chapel has been rendered not only more commodious, but the internal arrangements have been made so as to afford the greatest amount of comfort."

The chapel later underwent renovation in 1892-93, which also included the adding of a choir gallery and rostrum. By the 1900s, the chapel at Easton, much like Brackenbury's original one at Fortuneswell, had become too small to comfortably serve the island's growing population. The Methodist following at Tophill, namely Easton, approved plans for a new church in 1902, having waited until the costs of constructing the new Underhill Methodist Church at Fortuneswell were cleared. The 1854 chapel continued to serve Easton until 1907 when the new and larger Easton Methodist Church was completed and opened.

Conversion into and use as the Palace Cinema (1910s-1958)
Once the new church was opened, the 1854 chapel was sold to the pioneering English theatre proprietor and cinema developer Albany Ward, who converted it into the Palace Cinema in c. 1910. As one of a number of cinemas in the West Country and Channel Islands to be part of Ward's circuit, he also established another on Portland in the Masonic Hall at Victoria Square. Both cinemas proved to be successful and were regularly attended by local residents, with the Palace Cinema having the capacity to accommodate approximately 300 people. Ward's entire circuit, including the Palace Cinema, was later sold to Provincial Cinematograph Theatres Ltd in 1920, which he joined to undertake the management responsibilities for. Later that decade, the cinema was sold to a Mr. Hayes.

As the introduction of talkies began to phase out silent films from the late 1920s, a new luxury cinema, The Regal, was built in Fortuneswell in 1932. By 1934, Mr. C. Weight was the proprietor of the original two cinemas at Portland and in September of that year he was given permission by Dorset County Council to show films on Sundays at both venues. Despite this, the cinema at the Masonic Hall, then known as the People's Palace, was closed by the end of the year. Later in 1937, Mr L. Weyman and Mr E. Green formed a partnership and took over Easton's cinema. Despite the arguably superior facilities at the Regal, the Palace continued to prove a successful enterprise, although it never again opened for Sunday screenings.

From the late 1940s, a series of improvements were made to the cinema's auditorium, while updated projection equipment was installed in 1947. However, the cinema began to suffer with the increasing popularity of television over the course of the following decade. Although VistaVision and CinemaScope were installed in the mid-1950s, Easton Palace closed in 1958 when the last film to be shown, the British comedy The Admirable Crichton, was played to an audience of only two.

Use as the Palace Club and eventual demolition (1967-c.1986)
The former chapel was later purchased by Dorset County Council and handed over to the Dorset County Youth Service, who opened the Portland Youth Centre there in 1967. The centre, also known as the Palace Club, proved a popular facility on the island and remained in the former chapel until its closure in 1984. The centre relocated to new facilities at Royal Manor Comprehensive School (formerly Tophill Secondary Modern School) in 1986. Meanwhile, the chapel was sold to a private owner in 1985 and they received planning permission that December to demolish the building and replace it with three new houses. 11, 11a and 11b Easton Square now stand on the site. 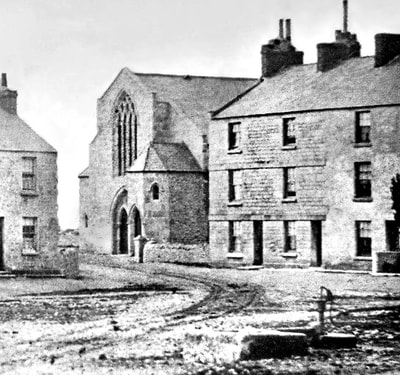 Easton Wesleyan Chapel as it appeared in the late 19th century prior to the transformation of Easton Square into Easton Gardens.