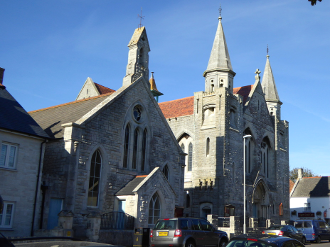 Easton Wesleyan School is a former school of late 19th century origin in Easton, built in 1877-78 and opened in 1878. It served as a council school from 1905 and closed in 1926 when it was replaced by the new Tophill School. The building then became the hall of the adjacent Easton Methodist Church, which it continues to serve as today. The former school (including its boundary wall) has been a Grade II listed building since May 1993.

History
Portland's Methodist circuit was established when the preacher Robert Carr Brackenbury visited the island in 1791. He had a small chapel built at Fortuneswell in 1792 and purchased a house at Wakeham in 1794 for use as a chapel to serve Tophill. After his death, his wife paid for a purpose-built chapel to be erected within the hamlet in 1825, which in turn was replaced by one at Easton in 1854. The island's first Wesleyan Day School opened in Fortuneswell in 1845, but there was no similar establishment for Tophill, although there was a Sunday school in a dwelling at Wakeham. The 1870s saw plans for a Wesleyan school to be erected at Easton which would serve as both a Day and Sunday school. Although an 1874 meeting over the potential school concluded that the existing ones on the island were adequate, the decision was soon made to proceed with the scheme.

Fundraising for the school's construction began in 1876. One bazaar held at Portland's Drill Hall that September was recorded as being well-attended, with "the result [being] most satisfactory". The plans for the school were drawn up by Mr. J. P. Scriven and a site was chosen at Easton Square. Tenders for its construction were sought in March 1877, with Messrs. Lynham & Bayliss of Portland receiving the contract for £960. Construction commenced in May 1877 and the laying of the memorial stones was held in the presence of a large crowd on 28 June 1877. After the ceremony, a public tea and lecture was held at the Drill Hall. The laying of the stones generated £60 towards the school's cost and a further £120 was raised through the sale of the Wakeham school.

Prior to the school's opening ceremony, special Sunday sermons were given in the Wesleyan chapel on 21 April 1878. Rev. W. Lewis of Weymouth was due to preach, but owing to illness, Rev. J. Hawkey preached in the morning, and Rev. W. Fell preached in the afternoon and evening. The school's completion was celebrated with an opening ceremony on 23 April 1878, when a public tea was held there for around 300 people, followed by an evening meeting. The school itself opened to students after Whitsuntide. On 10 June, a "very creditable and successful" bazaar was held in the building which raised £143 in profit towards the building's debt. The school, including the purchase of the land, cost approximately £1,200 in total.

As a mixed school, it was able to accommodate 317 boys and girls, and had an infant schoolroom at the back of the main one. Mr Arthur Ridge served as the original headmaster until 1884 and he was succeeded by Mr W. N. Ager until 1893, and then Mr W. Edwards until 1924. The school was recorded as having an average attendance of 237 children in 1889 and 322 (110 of which were infants) in 1904.

In mid-1903, the Wesleyan trustees announced their decision to close the school, prompting Dorset County Council to make plans to continue running it themselves as a council school. The leasing of the building to them had originally been intended for 1 September 1903, with the proposed terms including the council paying an annual rent of £80, an annual £45 for lighting, heating and cleaning, and around 83.3% of the costs of necessary internal repairs. The Wesleyan trustees would be responsible for the costs of insurance and any damage to the building during the duration of the lease. However, it remained open as a Wesleyan school beyond this time while talks between the two parties continued, with the council establishing a sub-committee to negotiate with the trustees.

In September 1904, the Western Chronicle reported that an agreement had been made for the school to be leased to the council for 10-11 years. The lease commenced on 1 January 1905, although it was not finalised until the following month. The same year saw the school extended, most notably westwards with the addition of a rear wing, and these new classrooms allowed it to accommodate up to 339 children. The school continued to teach boys, girls and infants, and was also provided with a "babies' room". In 1911, the school's average attendance was recorded as 219 boys and girls, and 85 infants.

By the 1910s, Portland's existing schools were suffering from overcrowding. While a new council school was built in 1913 to serve Underhill, the planning of and discussions for a new Tophill school continued into the following decade. In 1912, the Portland School Attendance Committee had expressed their hopes that a solution to the overcrowding would be found prior to the expiration of the Easton school's lease on 31 December 1915. The new Tophill School was eventually built in 1925-26, resulting in the closure of the Easton Council School. The former school building then became the hall of the adjacent Easton Methodist Church, which had been built in 1906-07 to replace the earlier Easton chapel of 1854.

Design
The former school is in the Gothic style and is built Portland stone, with a rubble core and ashlar facing, along with slate roofs. The original school was made up of the main schoolroom, measuring approximately 68 feet by 33 feet, with an infant schoolroom at the rear, measuring 28 feet by 16 feet. The facade has a projecting porch, with a triple lancet window and small circular window above, and large single lancets on each side. The small circular window was originally intended to hold a clock. The bellcote above is at an approximate height of 45 feet (the school bell was removed in 1974).

On its completion, the Southern Times described the school as a "fine building". The Weymouth, Portland, and Dorchester Telegram praised it as a "beautiful building" and noted, "Suffice to say it reflects the greatest credit on the architect and the builders. It is an ornament to the Square, and a memorial of the energy and progress of the Methodist Church." The Appraisal of the Conservation Areas of Portland considers it a landmark building within Easton's conservation area.

1) Dorset for You - Appraisal of the Conservation Areas of Portland - PDF document
2) Historic England - The National Heritage List for England - Wesleyan School with boundary wall - website page
3) Kelly's Directories of Dorset(shire) - 1889 and 1911
4) Portland Year Book 1905 - The Schools on the Isle of Portland - Paul Benyon - website page
5) Reports of the Medical Officers of Health for the Urban and Rural Sanitary Districts within the County of Dorset - for the year ended 31st December, 1905 - report
6) The British Newspaper Archive - various contemporary newspaper articles - website page 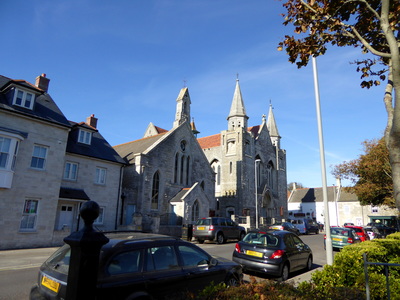 The former Wesleyan school, with the Easton Methodist Church on the right. 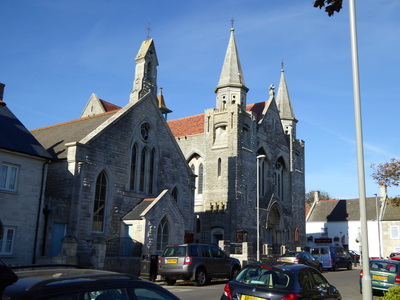