Owing to its strategic location on the south coast and the value of its anchorage, which was transformed into a harbour of refuge by the Victorians, Portland has been defended by fortifications spanning from the Iron Age to the early period of the Cold War.

This page aims to provide a summary of the island's major fortifications, with a focus on those that survive today. Other defensive works would have existed prior to the Victorian period, but details are largely scarce on them. Most of the sites featured below have their own articles which cover their full history and these can be accessed by clicking on their images or hyperlinks.

Between 1539 and 1547, King Henry VIII had a chain of coastal artillery forts built along the coastline of England and Wales as a result of tensions between England, the Holy Roman Empire and France. In 1534, after Pope Clement VII refused to annul his marriage to Catherine of Aragon, King Henry VIII broke from Rome and formed the Church of England. When the Empire and France declared an alliance in 1538, an invasion of England to attempt to re-establish Catholicism and counter the English Reformation was believed to be imminent. In Dorset, Portland Roads was considered both a valuable anchorage and potential invasion spot, resulting in two fortifications being built there as per the recommendations of Lord Russell.

The transformation of Portland Roads into a harbour of refuge during the mid-19th century is largely responsible for Portland's Victorian and post-Victorian defences. The Portland Breakwater Act was approved by the British government in 1847 for the construction of two breakwater arms to enclose the natural anchorage. Its perceived value to the Royal Navy, fears of a French invasion, the development of Cherbourg Harbour and concerns over the security of the English Channel all played a part in the creation of a harbour of refuge at Portland. While construction of the two breakwater arms was being carried out between 1849 and 1872, a number of fortifications were constructed to defend the new harbour and the ships anchored there.

The fortifications which were built at Portland during this period formed part of a wider programme intended to protect the United Kingdom from invasion. In addition to Portland, fortifications were built at many other strategic locations, including Plymouth, Portsmouth, the Isle of Wight and Dover. The Prime Minister of the time, Henry John Temple (Lord Palmerston), was responsible for setting up the Royal Commission on the Defence of the United Kingdom in 1859 to advise on "the most effectual means of placing the Kingdom in a complete state of defence". As a result, the fortifications built during this period are often referred to as Palmerston Forts.

The fine harbour of Portland, now so nearly approaching completion, affording as it does a secure anchorage of great extent and very easy of access, must at all times be a naval station of great value; but its situation and capabilities will render it of especial importance to this country in the event of war; it is therefore absolutely necessary that it should be so effectually defended as to ensure its use to ourselves, and deny its possession to an enemy. We consider that the works which have already been approved of will, when completed, be very powerful; and that they will suffice to render the harbour quite secure against attack.
Royal Commission on the Defence of the United Kingdom, 1860

The fortifications of the mid-19th century were largely obsolete by the time of their completion, as naval warfare and technology advanced at an unprecedented rate. In addition to RMLs being superseded by the introduction of QF and BL guns, a range of new technology was available for coastal defence including searchlights and range-finding and telephonic equipment. Portland's existing fortifications were modernised and supplementary ones added during the late 19th and early 20th centuries. The development of the torpedo also provided a new threat of warfare, prompting the harbour to be completely enclosed with the construction of two further breakwater arms, carried out between 1896 and 1905.

The work carried out at Portland renders the harbour completely secure against a torpedo attack. It is now one of the finest artificial harbours in the world. It is most suitably placed as a base for a fleet observing Cherbourg, and is not at a great disadvantage, as compared with Devonport, as the base of a fleet observing Brest.
Brassey's Navy Annual, 1903

The outbreak of war in 1939 and the fall of France in 1940 prompted the construction of new defensive works to combat aerial bombardment and a potential invasion by Germany, while existing fortifications retained their vital roles in coastal defence.

The threat of aerial attack led to the establishment of numerous light and heavy anti-aircraft positions across Portland and Weymouth. The earliest HAA sites to be established in 1939 were at the Verne, Southwell, Nothe Gardens and Barrow Camp (Wyke Regis). A further two were added in 1942; one at Black Head, near Osmington, and the other at Fleet. These six batteries were bolstered by various LAA positions and emplacements which were found all across the local area. Portland would be the target of 48 air raids over the course of the war.

The fall of France in 1940 sparked anti-invasion preparations across the south coast. A number of pillboxes (hardened field defences) were constructed on the island, primarily along the east coastline and within the region of the harbour. Rifle pits and slit trenches were also formed while other measures included laying minefields, anti-landing obstacles and anti-tank blocks. A battery of three 6-inch guns was established at Portland Bill and manned by the Royal Marine Mobile Naval Base Defence Organisation. Adding to the existing defences of Portland Harbour, torpedo firing positions and searchlights were established along the breakwaters and pier heads, and minefields also laid.

Plan of the coastal defences of Portland Harbour

A basic plan of the major defences and fortifications built to defend Portland Harbour. It can be opened by clicking on it. 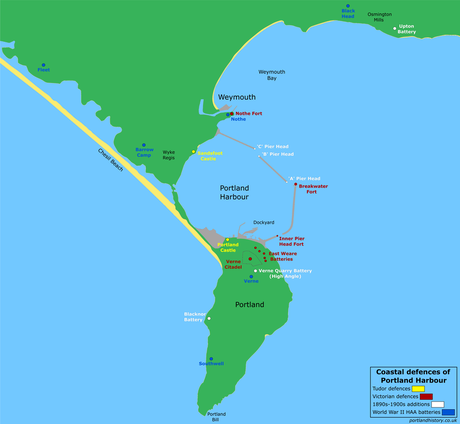