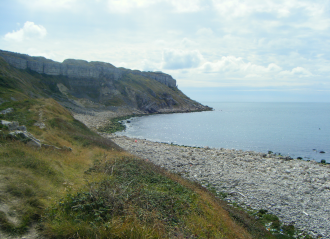 Hallelujah Bay is a bay on the west side of Portland, below West Weare and Clay Ope. It is accessed by a public right-of-way commencing at the southernmost end of the Chesil Cove esplanade. The area of coastline at the bay is known as Clay Ope and above West Weare is West Cliff, with Blacknor Point further south.

North of the bay is Tar Rocks, along with a large mound of rock and earth known locally as the Green Hump, and Jacob's Well which is fed by a natural spring. Hallelujah Bay is believed to have received its name in the late 19th century from Hiram Otter, who created the footpath leading to it. The pebbles along this part of Portland's coast are indigenous white Portland Stone, differing from those of the nearby Chesil Beach.

History
Hiram Otter, a quarryman and stalwart of Portland's Salvation Army Corps, began creating a footpath to the bay in the 1880s. It commenced from Chesil Cove and traversed West Weare to reach Tar Rocks. A man of strong physical build, Otter was able to move large boulders of stone with the use of a hand-jack. In addition to single-handedly creating the footpath, Otter would also etch biblical inscriptions and lines of some of the Salvationists' hymns onto the boulders he successfully moved. He would cry "Alleluia!" when each text was completed. He christened the bay as Alleluia (or Hallelujah) Bay and renamed the nearby Silverwell as Jacob's Well. Otter died in 1913, but the name he gave for this stretch of Portland's coast remained.

The path to Hallelujah Bay, often referred to as Undercliff Walk or Hiram's Road, soon became a popular recreational walk and the bay a destination for both locals and visitors. In 1898, at a time when Portland was receiving some attention as a holiday resort, the Southern Times suggested that the building of a promenade and the provision of refreshment booths would provide a "vast improvement" at what they considered to be a "charming spot, so beautiful in its wild and picturesque natural beauty". The newspaper reiterated again in 1900, "If the lands in the Weirs towards Blacknor could be laid out for building purposes and a promenade it would make one of the finest sites in the South of England."

Due to land movement in the Weares, the route of the path has been altered over the decades. It required repair work as early as 1904 and the Southern Times reported on the "disgraceful state" of the path in 1906, adding, "Nothing has been done to preserve this favourite walk from falling into an impassable state and unless something is done, and that speedily, the pleasant path will be destroyed." Work was carried out in 1908 to re-route part of the path which had been eroded by the sea, although in 1909 the Southern Times reported that another section was "so worn and crumbling that before many months - it may only be a matter of days - it will be impassable".

The path was restored and re-laid in the mid-1980s by the Community Programme Team. The work involved rerouting some of the original path, cutting back undergrowth, laying some tarmac in places, installing stone steps and handrails on the inclines, and placing down some large stone blocks as seats. The new path was officially opened during a ceremony on 4 March 1986, with the Mayor of Weymouth and Portland, Peter Harvey, cutting the ribbon. The ceremony was also attended by the Town Mayor, Yvonne Copus, alongside some officials from Weymouth & Portland Borough Council, local councillors and members of the Community Programme Team.

In 2012, the bay was used for an artistic celebration where a large number of stacked stone pebbles were balanced by a hundred locals of all ages. The event, named Portland Stone Stax, was organised by a group of three local artists. The event was held at the bay again in 2013, but due to access difficulties, all future events from 2014 were held at Chesil Cove.

Today, the path to Hallelujah Bay is recognised as an official public right-of-way, but due to landslides and falling rocks, Weymouth & Portland Borough Council closed it in April 2014. By this time, a section of the tarmac path had crumbled away and its adjoining railings destroyed.

Tar Rocks
Tar Rocks, located a short distance north of the bay, is an area containing a number of partially submerged rocks which form the remains of an ancient landslide from at least a thousand years ago. The British cargo steamer SS Thames went ashore there in foggy conditions on 2 January 1891, while on route from Penzance for London, with a cargo of granite and tin. Although it was initially hoped that removing some of her cargo would allow the ship to be refloated, it soon became a total loss. In 1930, the collier SS Barmston, was also wrecked there and became a total loss. 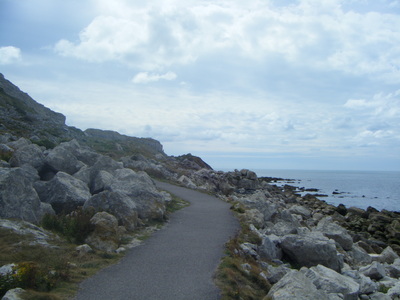 Passing Chesil Cove and the West Weare beach huts is this pathway leading out to Hallelujah Bay. 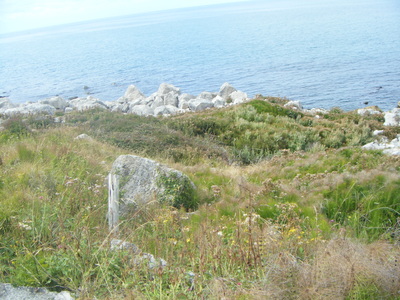 The surrounding land around the path is boulder-strewn, but plenty of wildlife is to be seen. 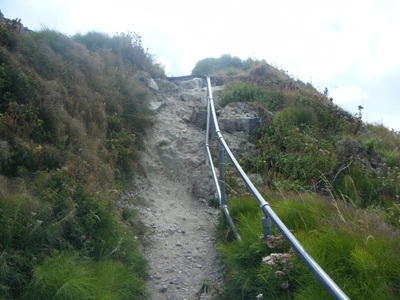 The rising pathway, and its railing, was greatly damaged during 2014. 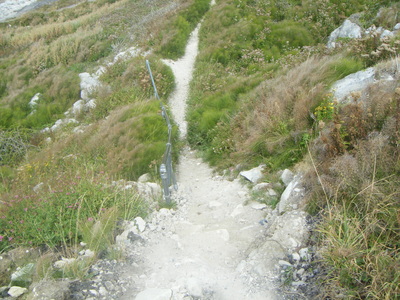 Looking back down upon this section of the pathway. 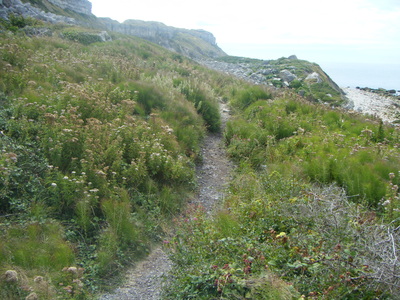 The pathway continues until it reaches the bay, which can be seen on the right. 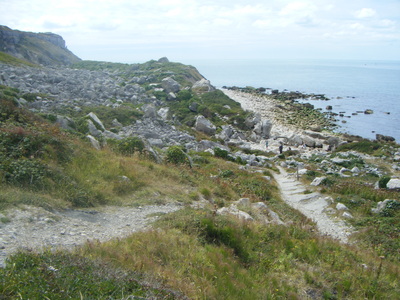 Overlooking Green Hump and the bay. 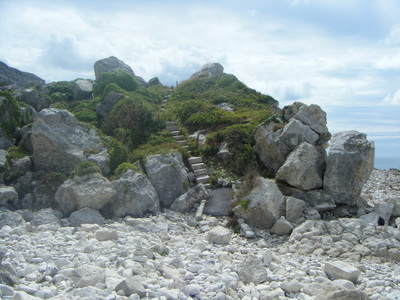 Steps lead upwards to the top of the mound known as Green Hump. 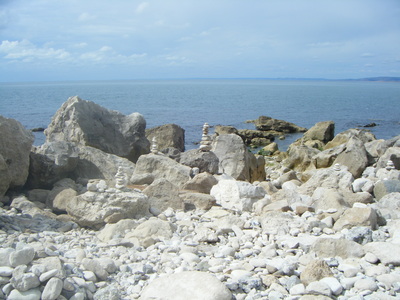 The section of Hallelujah Bay before rising up to the tip of Green Hump features some stone stacks, which are still created following the popular Stone Stax events. 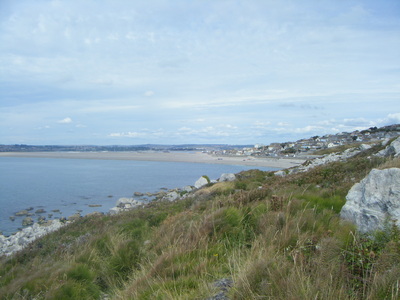 The view looking back to Chesil Beach. 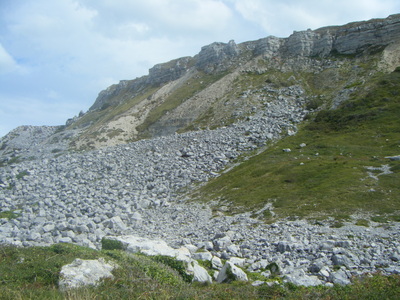 The view looking up the man-made scree slopes, to the clifftops. 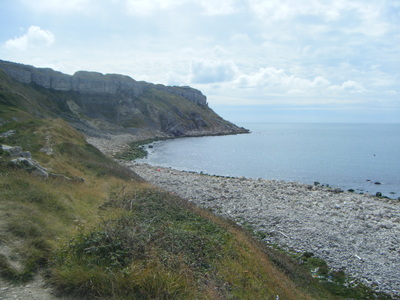 Hallelujah Bay from the mound. 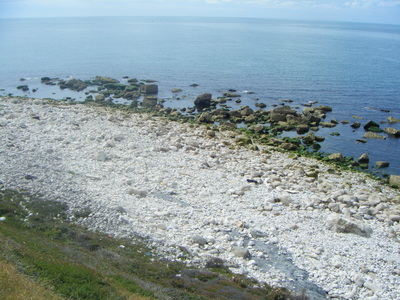 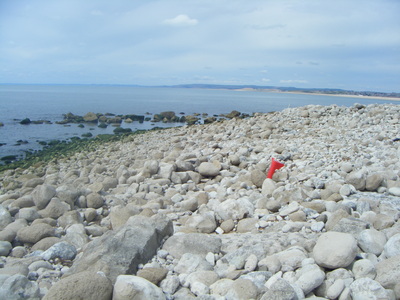 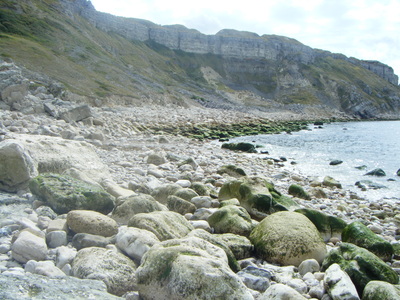 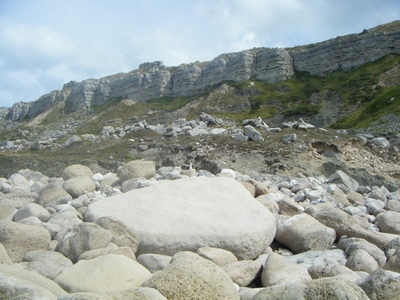 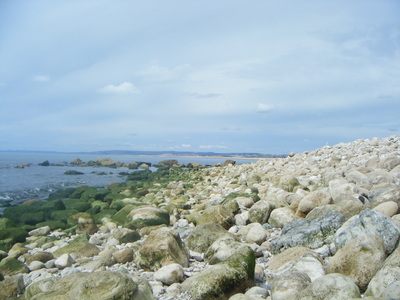 Situated off the bay is Tar Rocks. 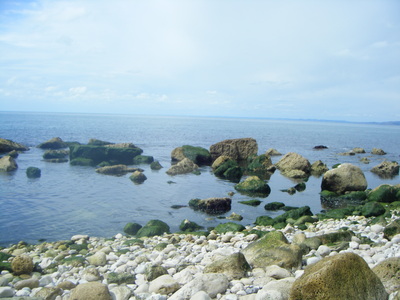 A closer look at Tar Rocks. 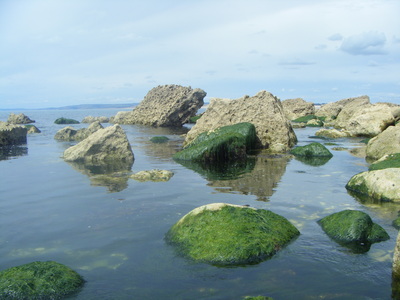 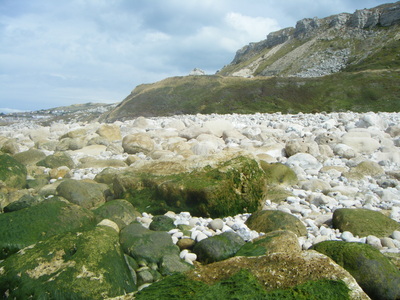 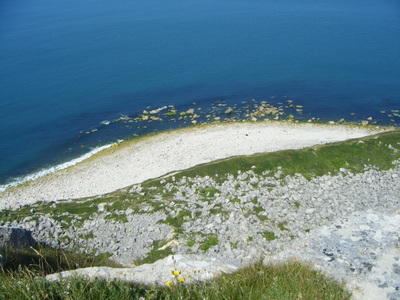 Looking down on Hallelujah Bay area from West Cliff. 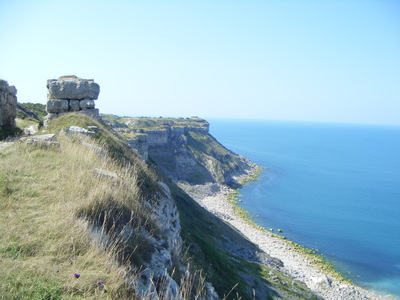 The bay is overlooked by Blacknor Point further south.