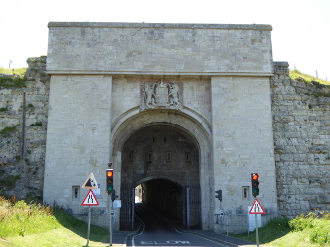 HM Prison The Verne is a Category C men's prison, established in 1949 within the Verne Citadel. Operated by Her Majesty's Prison Service, the prison occupies the southern part of the citadel. HMP The Verne briefly served as an Immigration Removal Centre in 2014-18 before reverting to its previous use as a Category C prison.

History
The Verne Citadel was one of a number of defences constructed in the mid-19th century to defend Portland Harbour. It was built between 1858 and 1884, and saw its final military use by men of the Royal Engineers, who departed in early 1948.

With the UK facing a general overcrowding of its prisons and the introduction of the Criminal Justice Act of 1948, the government sought additional prison accommodation, with the Verne being identified as a potential site. Negotiations were opened with the Admiralty and they agreed to hand over the Verne to the Home Office, allowing it to be transformed into a prison. The Home Secretary James Chuter Ede announced in the House of Commons during January 1949 that the Verne "has been acquired to assist in relieving the general overcrowding of prisons and in providing the additional accommodation which will be required to meet the requirements of the Criminal Justice Act".

The Verne was established as a medium security training centre with accommodation for 300 prisoners, all of whom were selected prisoners relocated from other prisons in the South West. The first prisoners, an advance party of 20, arrived on 1 February 1949, and the first governor to be appointed at the new facility was Mr. John Richards. Not much time had passed when the Verne saw its first escapee, David Connor, who was found missing on 22 April, but recaptured later that day near Wareham. A further twenty two escapes were seen up to the end of 1954 alone and further examples continued throughout the prison's life.

In December 1955, Verne inmate John Hannan escaped just a month into his sentence with a fellow prisoner, Gwynant Thomas, using knotted sheets to scale the prison wall. Hannan had been sentenced to twenty-one months for car theft and the assault of two police officers. The pair made their way along the railway line from Portland to the mainland and broke into a local petrol station, stealing beer, cigarettes and overcoats. Although Hannan's companion was recaptured the following day at Kingston Russell, Hannan himself evaded capture. In 2001, he entered world record books as having been on the run longer than any other prisoner in the world.

Over the decades, the southern region of the citadel, occupied by the prison, was substantially rebuilt, often using prisoner labour. New living accommodation was proposed for the prison in 1969, with the first two new accommodation blocks being opened in June 1972. In total, three new blocks (A, B and C) were built, each of which had two wings, with each wing containing eighty rooms on the second and third floors. The ground floor contained communal and dining areas, along with office space for staff. All work was completed in 1975. Nine dormitories, known as D Wing, were also later established within the citadel's casemates, providing accommodation for seventy-two prisoners.

By 1977, around 500 prisoners were serving their sentences there and from the 1980s, the Verne was considered a C Category prison. The prison population was 521 in 1988 and 552 in 1996. In April 1997, D Wing started being used for the experimental Kainos Programme, a rehabilitation in-prison programme, which saw disobedience in prisoners drop considerably within a two year period. In 2009, it was recorded that approximately sixty per cent of the Verne's population were foreign nationals, with over fifty nationalities represented. All prisoners were serving medium to life sentences.

In May 2013, it was announced that the prison was being considered for use as an immigration removal centre to house 600 detainees awaiting deportation from the UK. The Ministry of Justice confirmed the conversion of the prison on 4 September 2013 and it closed in November 2013, with all prisoners being transferred to other prisons. Conversion work commenced with a planned opening date of February 2014. The first detainees arrived on 24 March, although the centre officially remained as HMP The Verne until September. In October 2017, it was announced that the centre would close on 31 December 2017 and revert to a prison in 2018.

In May 2018, it was announced that HMP The Verne would reopen that summer as a Category C training prison for "Men Convicted of Sexual Offences" (MCOSOs). All prisoners are required to undergo the Sexual Offences Treatment Programme prior to their arrival at the Verne. The six residential units contained within the prison's three accommodation blocks have been renamed Arne, Abbotsbury, Bincombe, Blandford, Corfe and Chesil. The nine dormitories forming the Dormitory Unit (formerly D Wing) contain new reception areas, which are used to carry out inductions for new arrivals. The prison also contains a Care & Separation Unit.

Education and training
The Verne has offered various training and education programmes since its establishment in 1949. Various workshops and buildings were erected within the prison's perimeter, while some of the citadel's casemates were used for a variety of purposes, including workshops and storage. During the 21st century, all of the prison's programmes were offered on a part-time basis and provided between four contractors. An Information Advice and Guidance Centre was available to prisoners, with facilities available for both private study and open learning. The prison offered a variety of courses, including bricklaying, plastering, painting and decorating, as well as accredited qualifications offered in contract services, carpenters assembly, gymnasium, kitchen, fork lift truck driving, electrical wiring and industrial cleaning. Job Centre Plus operated from the prison twice a month. Sport facilities included a gymnasium, a grass sports field and two tennis courts.

In November 2011, the Jailhouse Cafe was opened within a former prison staff mess building in the northern section of the citadel. Operated by Expia, a charitable organisation, the cafe is open to the public and staffed by prisoners on day release. Its purpose is to offer prisoners work experience and reduce reoffending. Since 2014, only prisoners from HMP/YOI Portland work in the cafe.

Prison chapel
Converted from the former officers' mess of the Verne Citadel, the prison chapel was dedicated by the Bishop of Salisbury, Rev. William Anderson, on 26 July 1955. During the ceremony, the Bishop commented: "This is a beautiful Chapel - one of the most beautiful that I have dedicated." It remains in religious use to date. 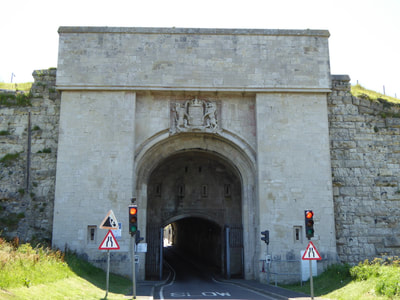 The northern entrance of the Verne Citadel, now the entrance to the prison. 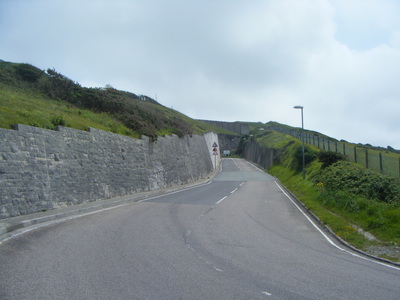 The winding road that leads from Verne Common up to the citadel. 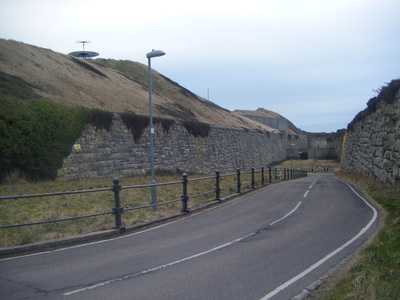 And the road further up. 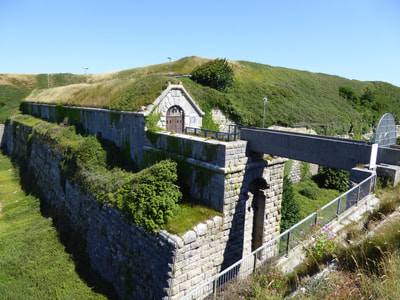 Across the other side of the citadel is the southern entrance. 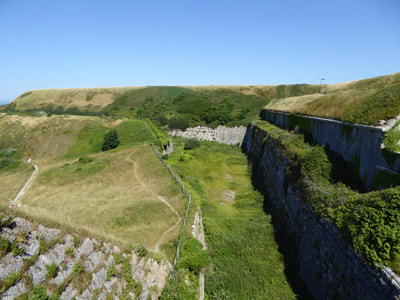 The ditch on the left side of the southern entrance. 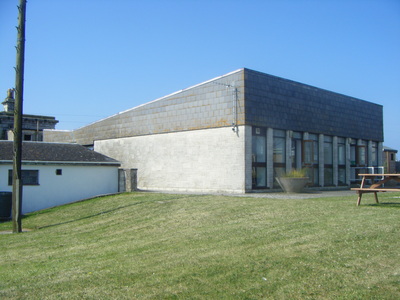