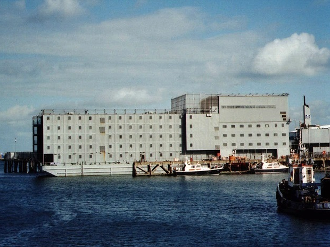 HM Prison Weare was a Category C prison ship for adult males, berthed at Portland Port in Portland Harbour. It was acquired by the British government in 1997 and remained in use until 2005. The ship was sold to Sea Trucks Group the following year and departed Portland in 2009.

History
Use of ship prior to arrival to Britain as HMP Weare (1979-1997)
The ship that became HMP Weare was built in 1979 by Götaverken Finnboda of Stockholm, Sweden, as a floating accommodation barge for the offshore oil and gas industry. Named Safe Esperia, the vessel was one of several such barges owned by the Swedish company Consafe Offshore AB. It was later acquired by the British company Bibby Line in 1982, renamed Bibby Resolution and chartered to the Ministry of Defence to provide troop accommodation in the Falkland Islands.

Bibby Resolution, and her sister ship Bibby Venture, were later bought by the New York City Department of Correction in 1988 to serve as prison ships. Bibby Resolution, as Maritime Facility II (MTF2), was docked in the East River at Montgomery Street and held up to 380 inmates. It closed in 1992 after it was considered too expensive to retain and the ship remained unused for a few years before being purchased by the British government in 1997.

Purchase, opening of and use as a prison ship (1997-2005)
Britain was facing growing numbers to its prison population in the 1990s, which caused overcrowding in HM prisons and the expensive use of police cells across the country. The government considered a number of temporary measures, one of which was the purchase of a prison ship. In 1993, the director general of the prison service, Mr. D. Lewis, said on behalf of the government: "Maritime detention facilities are one of the options being considered as part of a Prison Service contingency planning exercise. This exercise is intended to identify options for coping with levels of prisoner population that exceed the available accommodation. A number of sites with the necessary docking facilities are being reviewed, but no decision has been taken on the feasibility of this option".

In December 1996, senior governors of the prison service traveled to New York to inspect the Bibby Resolution and assess whether the ship was suitable for use as a HM Prison. The government decided to purchase the ship on 15 January 1997 and a deal with the American government was signed on 31 January. The vessel, which was renamed HMP Weare, cost £3.7 million, with an additional £800,000 in transportation costs to bring it across the Atlantic. With the recent closure of HM Naval Base Portland, Portland Harbour, which was sold by the Ministry of Defence to Portland Port Ltd in 1996, was chosen as the home of the new prison. The ship departed New York on the barge Giant 4 on 25 February 1997 and arrived at Portland on 13 March.

Portland Port Ltd provided a temporary berth until planning approval for the prison's shore-based facilities was finalised. These facilities were the only aspect of the new prison which required planning permission, but the application was refused by Weymouth & Portland Borough Council in February. The council objected to the siting of the prison ship at Portland and published their own report criticising the government's decision the following month. In particular, the council feared the ship's presence would damage the area's growing tourism industry, which was seen as an essential aspect of the local economy following the closure of HM Naval Base Portland in 1996. The prison service appealed against the planning decision and the Secretary of State for the Environment granted permission after a short inquiry. Preliminary and refurbishment work was then carried out on the vessel from April, which was believed to have cost £11 million.

HMP Weare opened in June as a medium security Category C prison. As refurbishment work was not expected to be completed until July, initially only a small section of the prison was opened, with the first 16 prisoners arriving on 11 June. The ship's 45 prisoners and their staff had to be evacuated on 25 June due to the activation of the fire alarm. No fire was found, but essential repairs to the prison's sprinkler system resulted in HMP Weare's temporary closure and all prisoners being transported to HMP Hollesley Bay.

The ship soon reopened and once the refurbishment work was completed in July, HMP Weare was able to accommodate up to 400 prisoners within its five-storey cell block. All prisoners incarcerated on the ship were serving the last months of their sentences. Work and education classes were available to prisoners, while exercise facilities included two gymnasiums, an outdoor exercise area on the top deck of the ship and additional exercise areas on shore.

Leading up to, and upon its opening, HMP Weare generated much political and local controversy, but later became something of a tourist attraction. Weymouth & Portland Borough Council initially opposed the opening of a third prison in the area, claiming it would affect tourism and damage Weymouth's image as a seaside resort. The ship, which provided around 250 jobs, was estimated to have boosted the local economy by £9 million a year.

After two years of use, in 1999, HM Prison Weare was given a positive inspection report by the then-chief inspector of prisons, Sir David Ramsbotham, who said it delivered "the best possible treatment and conditions for prisoners under difficult circumstances". Although the prison was considered by the government as an "unalloyed success", there was much debate over the ship's long-term future. Initially it had been purchased to serve for three years but, in May 1999, this was extended until 2002. HMP Weare later saw its first and only escape on 9 February 2003, when David Beech escaped over the perimeter fence. He was recaptured in London on 20 February.

Closure of HMP Weare (2005)
Despite a largely positive report being produced by the Independent Monitoring Board in 2003, an inspection report published in November 2004 by the Chief Inspector for Prisoners, Ms. Anne Owers, was highly critical of the ship. She complained of the "unacceptably cramped and claustrophobic" conditions on-board and how the prisoners had no exercise or access to fresh air. Owers concluded that the ship was "unsuitable, expensive and in the wrong place" and "despite the best efforts of staff, HMP Weare is entirely unsuitable for its present function". Over one hundred recommendations were made to improve conditions. The following month saw talks between the Metropolitan Police and the Home Office over the ship's potential relocation to the Thames to assist with the overcrowded cells of London.

On 9 March 2005, it was announced that HMP Weare was to close by the end of the year. Not only was the ship in need of a multi-million pound refurbishment to meet standards, but the current operational costs had become too expensive. During the following month, the Weymouth and Portland Dive Charter Association formulated plans to sink the ship off the west side of Portland if the government agreed to donate it to the association rather than sell it. The association hoped it would help revitalise the local area's diving industry, but the project did not come to fruition.

HMP Weare closed on 12 August 2005. During the wind-down period, most of those serving time on the ship were released once their sentences came to an end, although sixty prisoners had to be transferred to other prisons. Speaking to The Guardian in August 2005, Don Wood of the Prison Officers Association for the Weare stated: "It did feel cramped - a bit like the cabin decks of a cross-channel ferry. The cells with sea views were okay, but others had no natural light so conditions were pretty miserable. The ventilation system was very old and starting to wear and it was noisy." Juliet Lyon, director of the Prison Reform Trust, said the ship "suffered from a shortage of fresh air, light, exercise space, and any constructive work for prisoners to do."

Upon its closure, various locals, prison campaigners and politicians voiced relief, while others, including some local politicians spoke of the regret they felt based on the loss of jobs and income it brought to the area. Les Ames, a local councillor and mayor of Weymouth and Portland, told The Guardian in August 2005: "I had reservations when it first came. But, in truth, now the Weare is a tourist attraction. When people come to Portland, the first thing they say to me is: 'Where is the prison ship?' I'll be sad to see it go in some ways."

Selling of ship to Sea Trucks Group and departure from Portland (2006-09)
In August 2006, it was revealed that the government had sold the ship to the shipping company Sea Trucks Group, who intended to have the ship put into use as an accommodation barge for the oil industry. The ship was quickly renamed Jascon 27 and remained at Portland Port while the company carried out refitting and refurbishment work. The work was completed in 2007, but the vessel remained at Portland until December 2009, when it left under tow, bound for Onne, Nigeria. Since 2016, Jascon 27 has been laid up at Onne Port.

Prisoners
Prisoners of HMP Weare included Dan Treacy of the UK new-wave band Television Personalities, who was incarcerated from 1998 to 2004 for shoplifting. In a 2006 interview with Metro, Treacy spoke of his time in the prison ship: "I've been in prison four times now for things like shoplifting to feed my drug habit. I got transferred from Brixton to what I called The Good Ship Lollipop (floating HMP, The Weare). It was the best thing that could have happened. Brixton was horrendous. I was not in a cell but in a cabin and could look out of the window over Weymouth Bay. The prison warders were pretty cool and there were computers. I found fan websites." 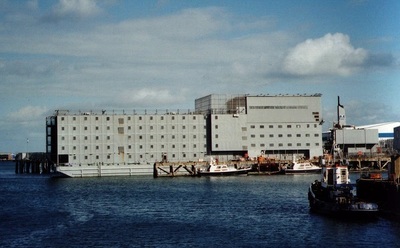 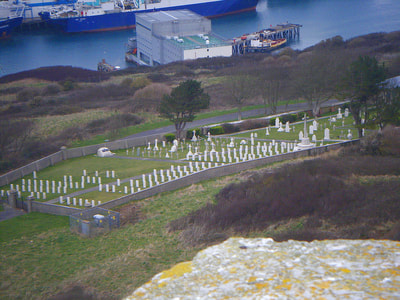 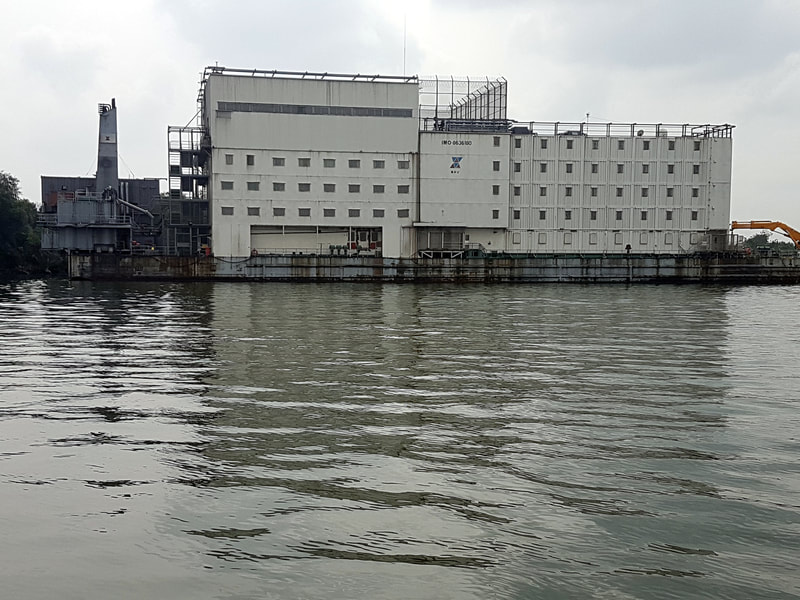 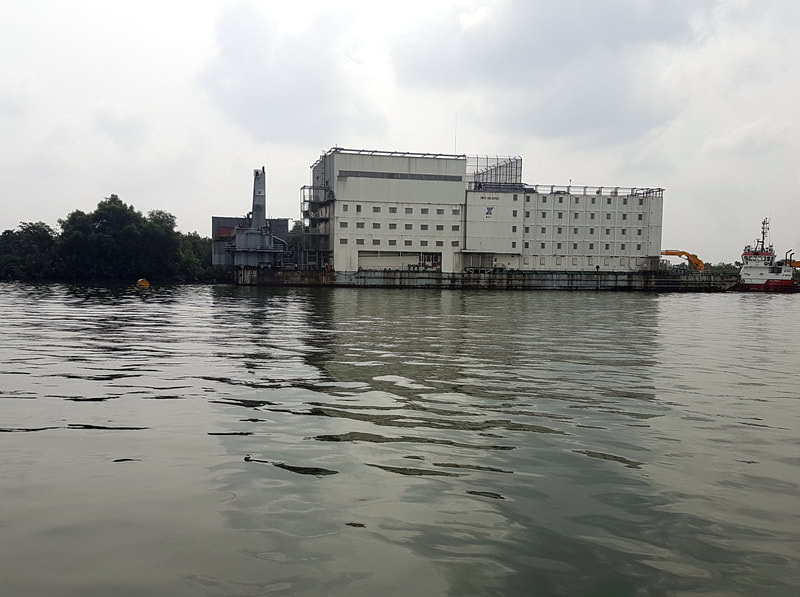 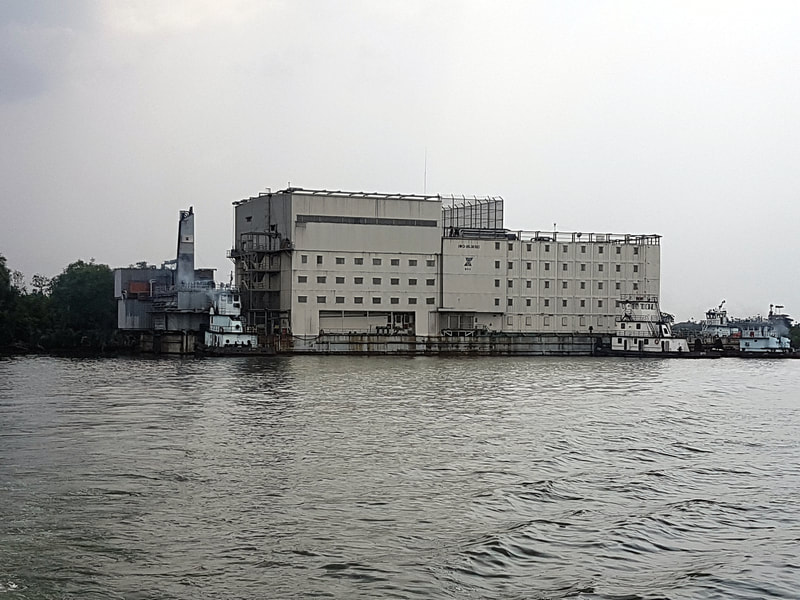 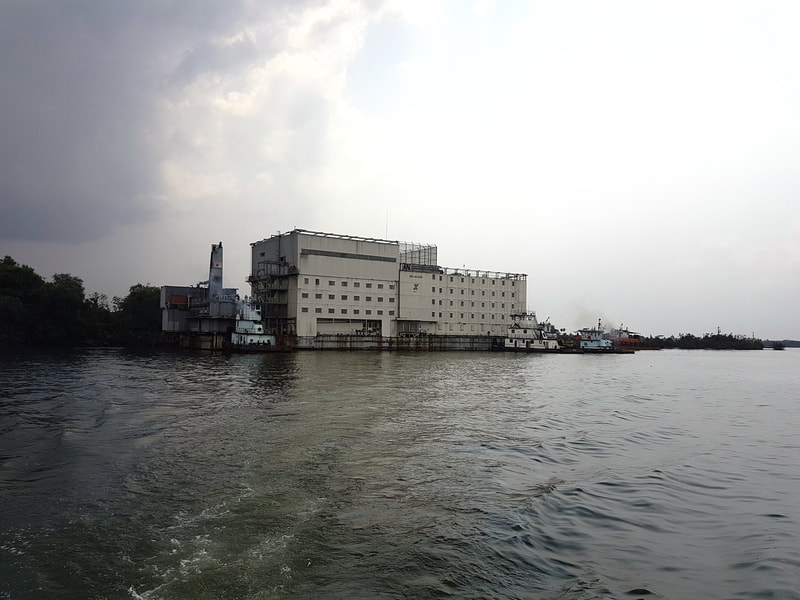 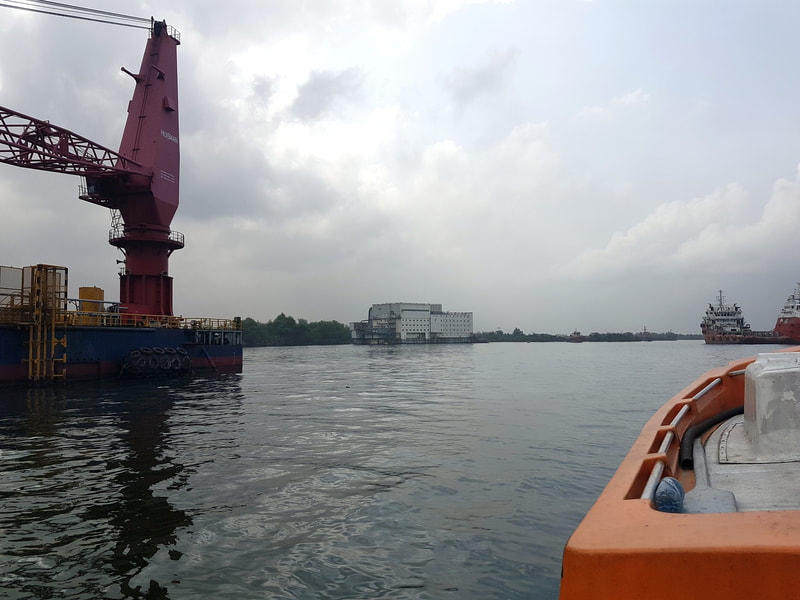