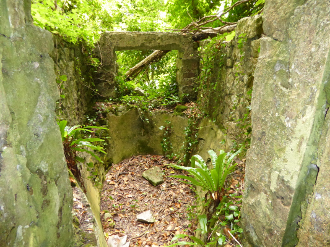 John Penn's Bath is a stone bath of early 19th century origin, built for John Penn, the original owner of Pennsylvania Castle. It is located on the wooded hillside directly below the castle and above Church Ope Cove. The bath measures 9 feet (2.7 m) long, by 4 feet (1.2 m) deep and 4 feet (1.2 m) high.

History
Sea bathing gained popularity throughout the 18th and 19th centuries for its perceived health benefits. In the late 18th century, Weymouth was transformed into a popular seaside resort following a succession of summer holidays taken there by King George III between 1789 and 1805. Recovering from ill health, the King chose the town as a good location for sea bathing and would make use of a bathing machine in Weymouth Bay.

During one of the King's excursions to Portland, he was accompanied by the politician and writer John Penn, whose mother, Juliana Fermor, was a lady-in-waiting to Queen Charlotte. Following Penn's discovery of Church Ope Cove, the King granted him the Crown-owned land on the cliff above as a site for a marine residence. Pennsylvania Castle, designed by the renowned architect James Wyatt, was constructed in 1797-1800.

Following the castle's completion, Penn concentrated on expanding and enhancing his grounds, including having the ruins of Rufus Castle and St Andrew's Church enclosed, which in turn sparked much protest from local residents and Portland's governing Court Leet. During this same period, Penn decided that he wanted to enjoy the benefits of sea bathing, but without having to make the journey down from the castle to the cove below. He chose a plot of common land on the sloping hillside below the castle and had a large oval-shaped bath built there in 1805.

Although the Court Leet were made aware of Penn's encroachment onto common land while the bath was being constructed, they decided to wait until it had been completed before demanding an annual rent of half-a-crown from him. Penn refused to pay and chose to abandon his bath after having only used it on a few occasions. When he did use it, his valet was tasked with filling the bath with seawater from the cove below. Meanwhile, the legal issues between Penn and the Court Leet over the enclosing of Rufus Castle and St Andrew's were finally settled in 1822, with Penn agreeing to pay five shillings per year in return for keeping the historic sites as part of his grounds. 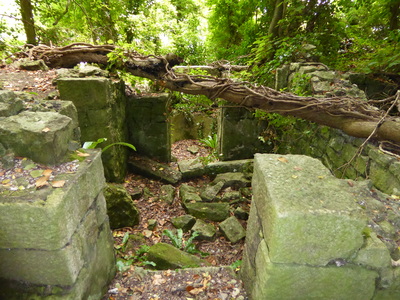 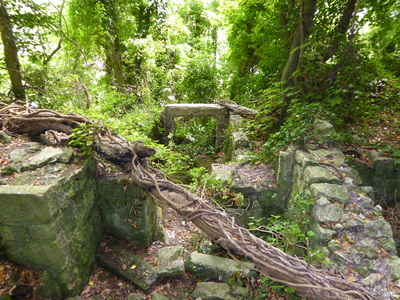 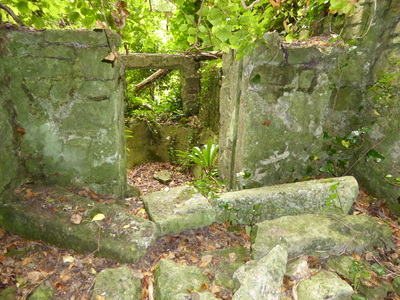 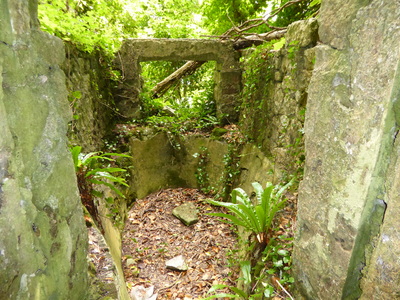 The main bath section of the construction. 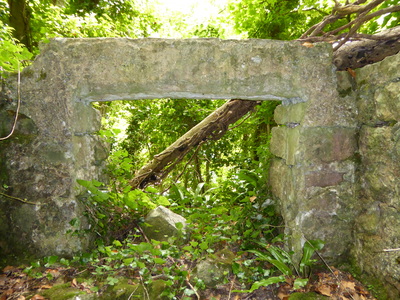 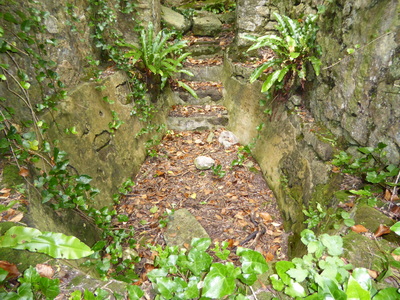 A view of the bath section from the other end. 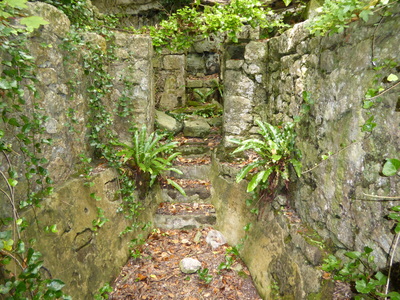 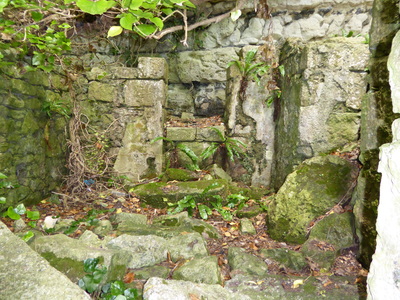 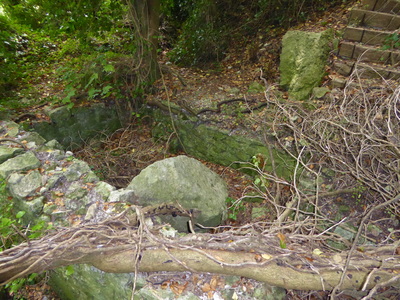 A view of the remains of an associated part of the construction, found on the right-side of the bath. 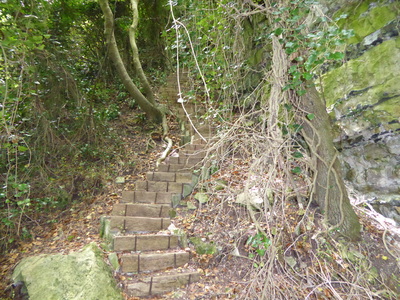 The steps seen here lead to the gardens of Pennsylvania Castle, which is signed private at the top. 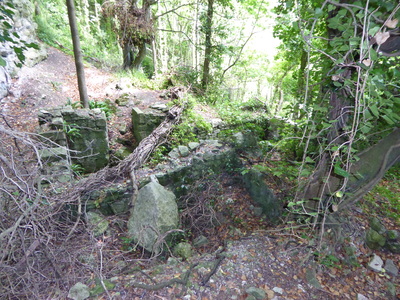 The view over Penn's Bath from the steps. 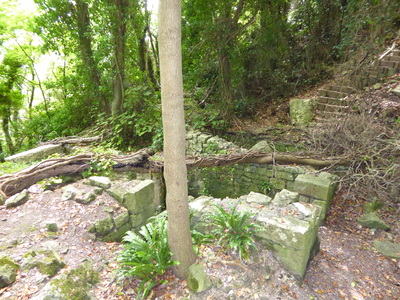 And a view of the bath from the other side. 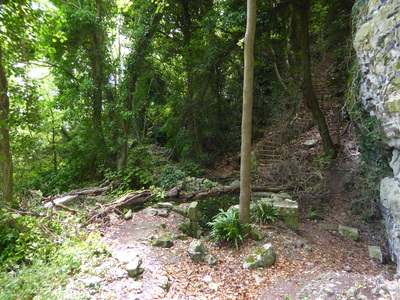 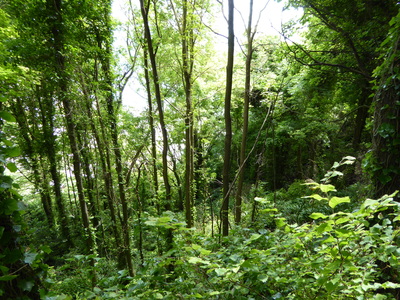 The surrounding woodland area of the bath is very unusual for Portland. Further below are beach huts at Church Ope Cove. 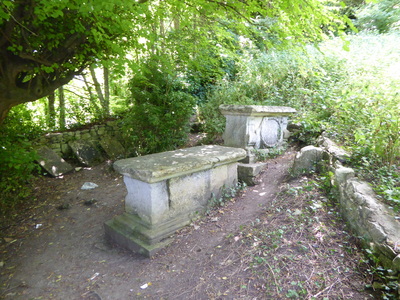 The bath is reached via an unofficial pathway linking off of this section of the ruins of St. Andrew's Church. 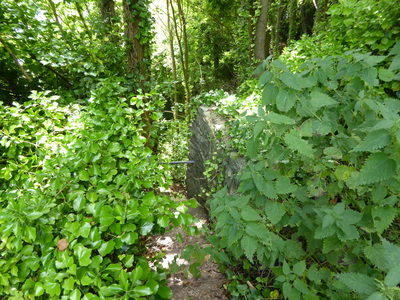 The path leading to the bath has had a metal bar placed in the opening of the wall, presumably to deter access. 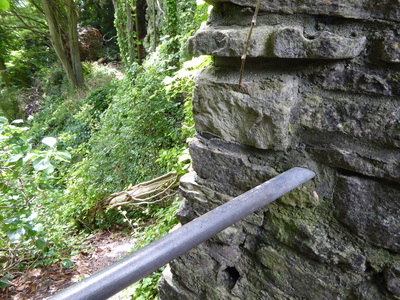 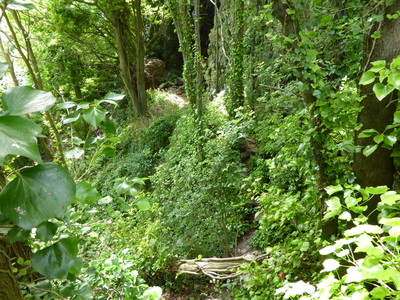 A view of the rather unstable path leading down to the bath.