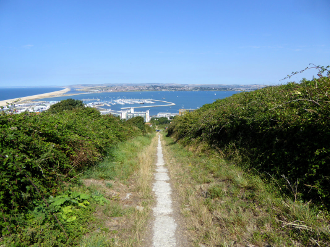 Merchant's Railway, known during its operation as the Portland Railway, was a horse-drawn and cable-operated railway, built for the exclusive use of Portland's stone industry. It was the earliest railway in Dorset, opening in 1826 with a gauge of 4 feet and 6 inches. The railway remained operational until 1939 and its tracks were removed in 1956.

The railway allowed many working quarries within the northern region of Tophill, such as Tout, King Barrow, Waycroft and Inmosthay, to transport stone to Castletown, from where it would be shipped around the country. The railway began at Priory Corner, skirted around the edge of Verne Hill and descended down the Merchant's Incline to Castletown. It has been calculated that during the railway's use, 4,561,796 tons of stone has travelled down the incline.

Since becoming disused, the route of the railway has become a popular public footpath, much like the nearby Rodwell Trail, which follows the route of the now-disused Weymouth and Portland Railway. The majority of the route of the Merchant's Railway can be recognised today, along with other remains linked to its use from stone sleepers to bridges.

History
The developing need for the Merchant's Railway
Portland's stone industry traditionally shipped stone from numerous piers and points around the island's coast, including the wharfs and pier at Castletown, and piers at East Weare such as King's, Folly and Durdle. The early 19th century saw national demand for Portland stone continue to rise, prompting quarrying to begin moving inland from their traditional clifftop sites. By 1824, the export of stone from the island had reached an approximate 27,000 tons per year. As the new inland quarries were left with no easy access to the existing shipping piers, several quarry lessees and other parties worked together to create a railway that would transport the stone down to Castletown, which was considered Portland's best shipping point.

Prior to the railway's construction, stone was transported from Priory Corner down the steep escarpments separating Tophill and Underhill on horse-drawn carts. Due to the steep terrain encountered on this route, the use of horses was deemed cruel, particularly those who acted as brakes by being tethered to the rear of the carts. An 1804 account from Francis Webb described how the horses "squat[ed] down on their haunches and suffer themselves to be dragged for many yards, struggling with all their strength against the weight that forces them forwards".

Planning and establishment of the Merchant's Railway (1824-26)
In order to raise the required funds, the Portland Railway Company was founded as a public, joint-share company by seventeen quarry agents in 1825. It was granted an Act of Parliament on 10 June 1825, with the ability to raise £5,000 in share capital (made up of 100 shares) and borrow an additional £2,000 if required. One condition of parliament's approval of the application was that the railway would not obstruct or hinder the defensive role of Portland Castle, and no building was to be constructed within 200 yards of it.

The company quickly completed negotiations with local landowners and the Commissioners of Woods, Forests and Land Revenues for the required land, and construction commenced soon after. The railway, which opened in August 1826, was designed by the civil engineer James Brown and built for a cost of £5,869. From Priory Corner, a ledge was excavated into the steep hillside of Old Hill, allowing the railway to reach the top of Tillycombe and travel around the outskirts of Verne Hill. Arriving at the top of the 650 yard-long Merchant's Incline (alternatively known as Freeman's Incline) on the north-west side of the Verne, the stone was then sent 270 feet down to be shipped at Castletown.

Horses were predominantly used on the railway. They brought the stone to Priory Corner from the quarries and once it had been loaded onto wagons by crane, they proceeded to haul them along the railway to the top of the Merchant's Incline. From there, the horses were untethered and a counterbalance method used so that loaded wagons descended the incline while simultaneously pulling a number of empty wagons back to the top. Originally there were two sections of the incline, each served by an overhead break drum which was connected to the wagons using chains. In 1854, roofed structures were added to enclose these drums, in order to protect them from the effects of weathering. The incline would undergo improvements in 1860, which saw the use of chains replaced by a wire cable system. At the same time, the lower drum was removed, leaving the top drum to operate the whole of the incline. A new pulley wheel and improved breaking system for the incline followed in 1905.

Operation of the railway and expansion
The Merchant's Railway proved to be a successful undertaking and many quarries quickly developed their own private lines to link their workings to Priory Corner. By the mid-19th century, as expansion of the quarries continued, a second, upper track was excavated around Verne Hill in 1866, allowing additional traffic to use the railway. Meanwhile, the opening of the Portland Branch Railway in 1865 allowed some stone to be transported using the main railway lines across the country rather than by boat. As the Merchant's Railway operated on a different gauge, a pair of exchange sidings at the bottom of the Merchant's Incline allowed stone to be transferred onto the branch's line.

During the mid-19th century, an incline was established above Tillycombe, to the south of Verne Hill, allowing stone to join the railway without having to travel to Priory Corner first. However, when the construction work for the Verne Citadel resulted in its removal in 1866, Yeates Incline was built a little further west to serve Waycroft, Withies Croft, King Barrow and Independent Quarries. Four bridges were constructed over the incline between 1875-82. Three of the bridges carried roadways, while the middle bridge carried a line from Waycroft Quarry. A timber break drum was installed at the top of the incline for the operation of a wire cable. Three of the bridges would become Grade II Listed in 1978, and the fourth in 1993. All remain in use today, either as part of a road or footpath. The upper bridge and middle bridge are dated 1882 and 1880 respectively, the lower bridge dated 1875 and the fourth bridge, located to the west of the other three bridges, is dated 1881.

Later years of the railway and eventual closure
With the introduction of traction engines on Portland in the 1890s and the opening of the Easton & Church Hope Railway line in 1900, the Merchant's Railway began to face competition. Despite this, the well-established railway remained the preferable choice for the transporting of stone and continued to carry good quantities along its lines. When the Portland Railway Company's original lease of the land at Castletown came close to its expiry date, a new, larger pier was constructed in 1897-98.

During World War I, the stone industry on Portland saw a significant drop in demand, resulting in the railway ceasing operations in June 1917, while the track of the Yeates Incline was removed around this time. The railway re-opened in January 1920 and continued to see encouraging use by the island's stone industry until the early 1930s, when declines in traffic were seen largely as diesel lorries began transporting stone by road. When the stone industry saw another slump with the outbreak of World War II, the railway closed again on 11 October 1939.

Much of the line fell into a state of decay after 1939, while the majority of its wagons remained unused at the bottom of the incline. During the war, the rails at and leading to Castletown Pier were removed to allow the War Office to make full use of the pier. Although permanent closure was not intended at the time, the increasing use of modern transport methods resulted in the line's failure to re-open after the war. In order to cover their existing costs and liabilities, the Portland Railway Company later decided to sell the route of the railway in the 1950s. The line's rails were removed for scrap in 1956 and the brake house at the top of the Merchant's Incline was demolished in the same year. Much of the scrapped rails would be used in the reinforcement of the sea wall at Chesil Cove, which was constructed in 1958-65.

With the removal of the rails, the route of the Merchant's Railway became an increasingly popular footpath. Today, much of the former railway is an official public right-of-way, including the route from Priory Corner and through Old Hill, the two levels along Verne Hill, and the Merchant's Incline. The routes around Verne Hill are within a designated Site of Special Scientific Interest (SSSI) and a Special Area of Conservation (SAC). 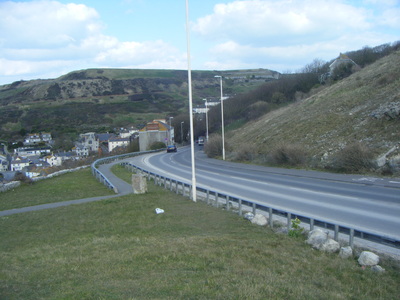 At Priory Corner, the stone was transported here so it could be transferred onto the Merchant's Railway. 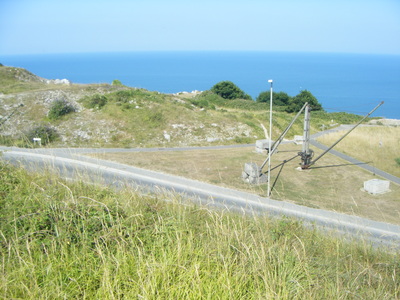 Further up Priory Corner there is a restored wooden quarrying crane. 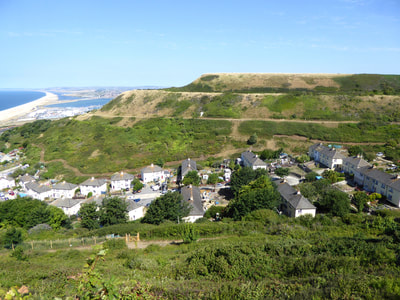 A look across at Verne Hill from New Ground - the railway would run around the edge of the hill in order to reach the Merchant's Incline. 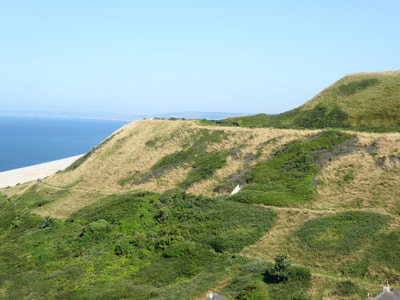 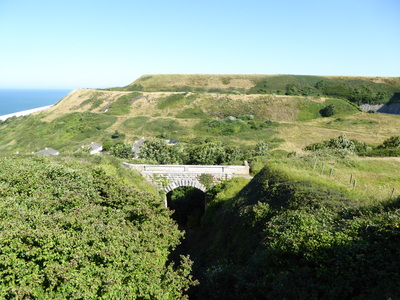 Looking across at Verne Hill from Verne Yeates. One of the four bridges at this spot can be seen here. 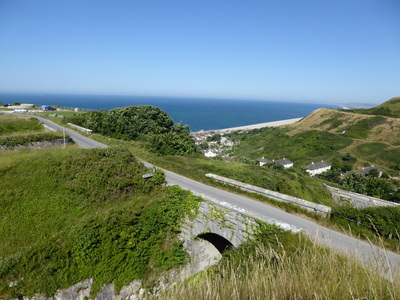 Looking across one of the bridges at Verne Yeates with another seen below. 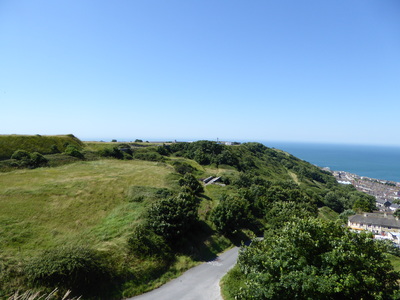 The tips of two of the bridges can be seen from near the southern entrance of the Verne Citadel. 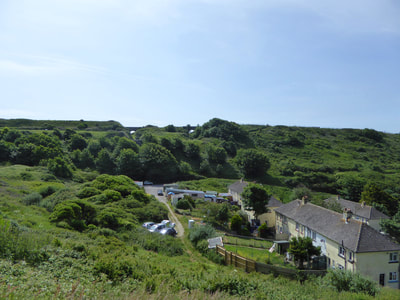 The four bridges (one of which is obscured by trees) as seen from Verne Hill. 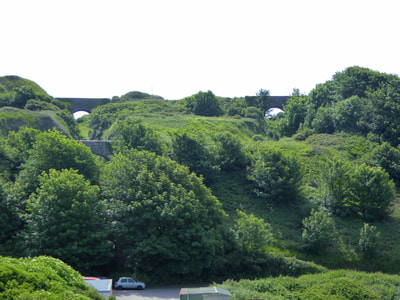 A closer look at the bridges. The fourth one is located just above the parked car, but is difficult to recognise behind the mature trees. 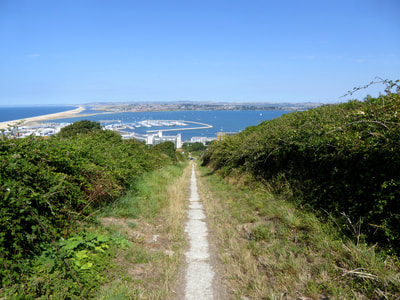 After passing around Verne Hill, the railway arrived at the Merchant's Incline, which in turn led down to Castletown. 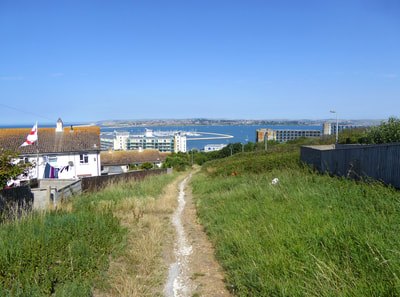 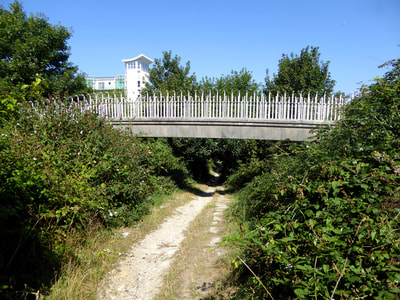 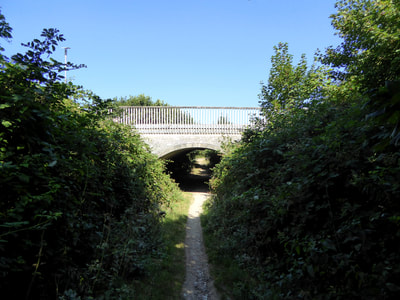 The bottom of the incline passes under this modern bridge. 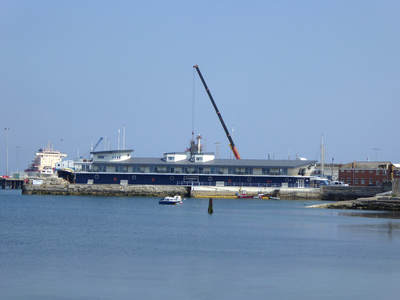 The destination of the railway was Castletown Pier, as seen here from Osprey Quay. 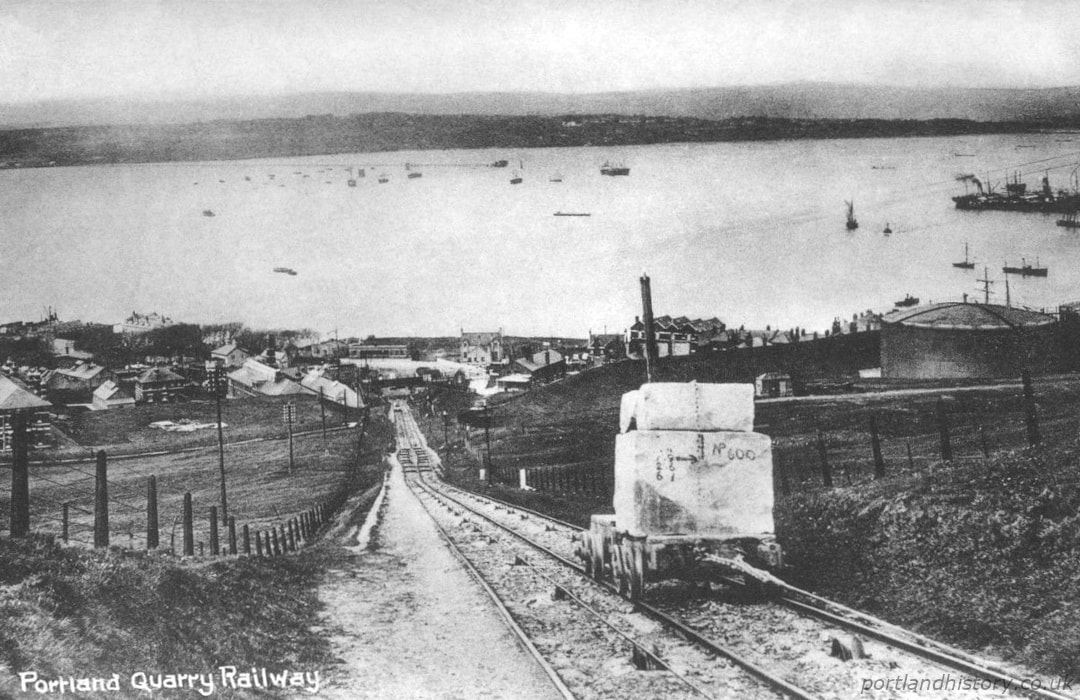 An early 20th century view of a stone wagon descending the Merchant's Incline to Castletown, photographed by Edward Hitch of Weymouth.

The bottom of Merchant's Incline as seen in this c. 1910 postcard, published as part of the Wessex Real Photo Series. The Royal Navy's hospital site lies on both sides of the incline and connected by the footbridge. The other bridge carries the line of the Easton & Church Hope Railway. 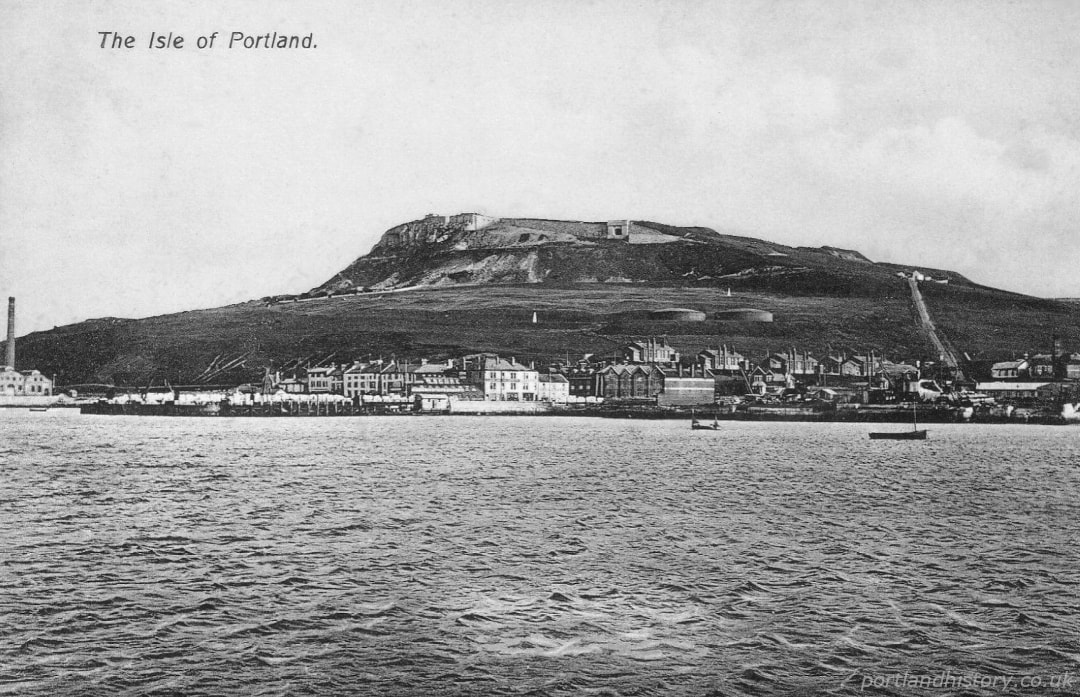 This early 20th century postcard from Edward Hitch shows Castletown from Portland Harbour. The Merchant's Incline can be seen on the right while stone awaits shipment on the pier. 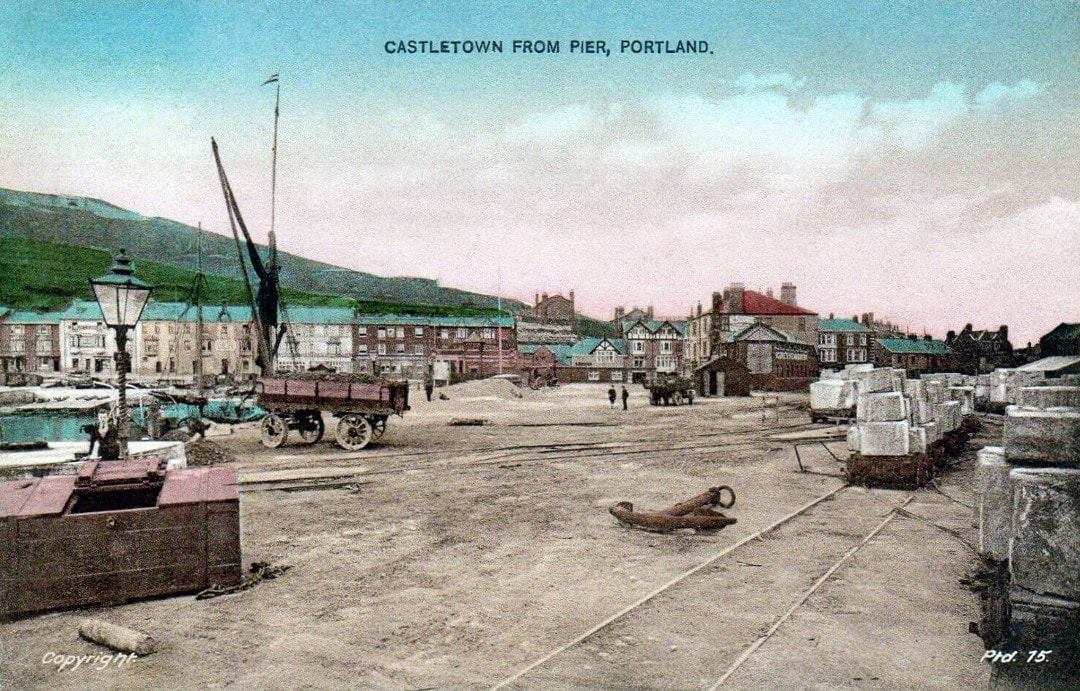 An early 20th century view of Castletown from Castletown Pier. Blocks of Portland stone can be seen on the right, waiting to be shipped off to their destinations. (Photographer/publisher unknown).