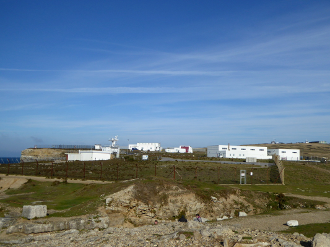 On the site is part of the West Raised Beach - a beach which represents the significant changes fluctuations in sea level and climate change during the last Ice Age, and largely consists of shelly and sandy pebble deposits. The other part of the beach is accessible to the public at their own risk, located on the outside of the boundary fencing of the range.

History
The establishment was built as a trials range by the Admiralty in the 1950s. In 1960, the Admiralty Underwater Weapons Establishment at Portland became responsible for the care and maintenance of the site, which was preserved as a general facility for the use of the Admiralty Weapons Department. By 1964, an environmental test facility was also established at the site for use of the AUWE. Due to the lack of magnetic interference at Portland Bill, the AUWE were able to accurately test sensitive equipment at the facility.

The site has seen expansion over the years and has been operated by QinetiQ since the 2000s. In addition to MOD Portland Bill, QinetiQ also operate MOD Grove Point, another Portland site, housed in the old Coastguard Lookout at Grove Point. It is used in conjunction with a sea range, but is not related to the Portland Bill establishment. Both remain the only Ministry of Defence sites on Portland, following the closure of Portland's naval base and research establishments in 1995-96, along with RNAS Portland in 1999.

DICE Trials of 1971 and 1975
MOD Portland Bill was involved in the DICE Trials of 1971 and 1975 . At the height of the Cold War, the Microbiological Research Establishment at Porton Down (MRE Porton Down) was commissioned to conduct a series of classified experiments based on the threat of biological warfare. The establishment had been conducting research into this field since 1949, which confirmed that a single enemy ship or aircraft could contaminate a large area of the UK during a biological attack. Early experiments had used the chemical zinc cadmium sulfide at the laboratory facilities of Porton Down, but when the facility was given authorisation to carry out similar trials using live bacteria, it was realised that a laboratory setting would be unsuitable. As a result, south Dorset was selected for a series of trials that were carried out from 1964, known as the Lyme Bay Trials.

Portland's establishment was involved in related trials of 1971 and 1975, which formed part of a feasibility study carried out by MRE Porton Down concerning the development of a biological weapon detection system suitable for use by the UK military. As the US had developed three detection systems of their own, negotiations began between the two countries on undertaking comparison trials between these various systems. For the trials carried out in November 1971, two sites were used to accommodate and test these systems; Porton Range in Wiltshire simulated a battlefield setting and the AUWE site at Portland Bill provided a maritime environment. The September/October 1975 trials only made use of the AUWE site for testing the detection systems. Both the 1971 and 1975 trials, conducted by UK and US personnel, involved the spraying of bacteria out in Lyme Bay, with the systems at Portland set-up to detect the strains once they were carried ashore by the wind. Bacillus globigii and Serratia marcescens were used to simulate biological weapons.

Facilities
Today the establishment is made up of various facilities, allowing it to provide a variety of services. It primarily carries out magnetic assessment, electronic calibration, and the surveying of airfields and sites that produce or store equipment used by Mine Countermeasure Vessels (MCMV).

The Land Magnetic Range (LMR) is used for the magnetic testing of equipment, specifically those relating to Explosive Ordnance Disposal (EOD) and MCMVs. The range is able to simulate the magnetic fields found at any location in the world using inbuilt coil systems, allowing the effect on equipment to be measured. The Compass Test Centre is used for the testing of magnetic compasses and has the distinction of being the UK's only accredited centre for "Type Approval of Magnetic Compasses and Binnacles". The site's Electronic Warfare Calibration facilities allow for the testing of military electronic warfare (EW) systems, and can calibrate electronic countermeasures on vessels of the Royal Navy while operating at sea. 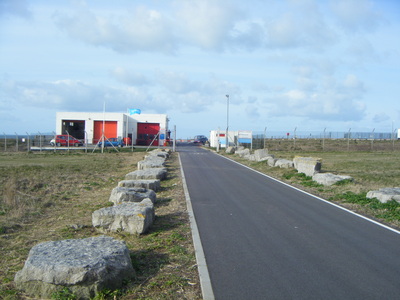 The entrance of the magnetic range. 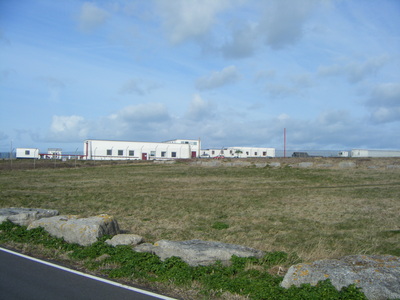 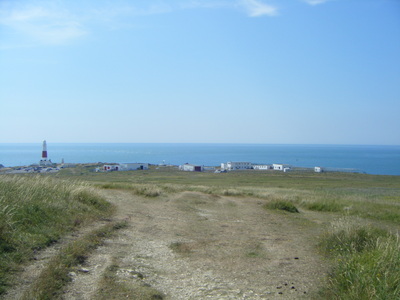 The site seen from further up the hillside, at the top of Portland Bill. 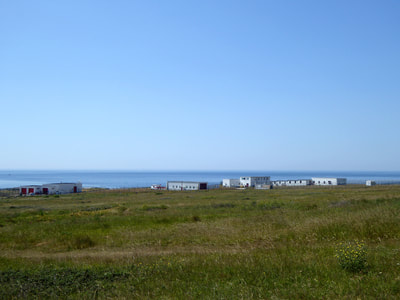 The establishment as seen from Branscombe Hill. 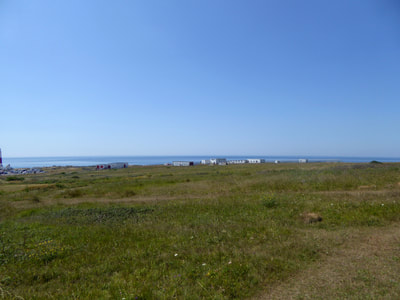 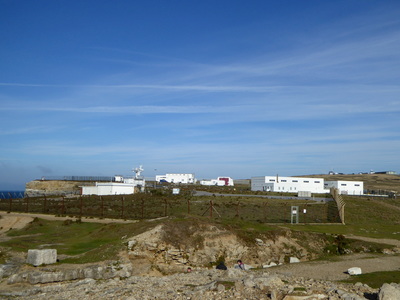 The magnetic range as seen from Bill Point area. 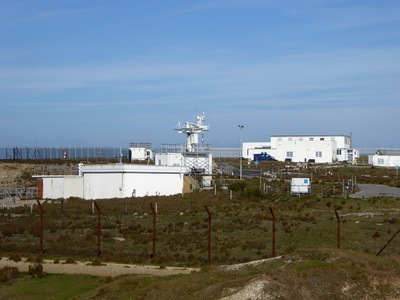 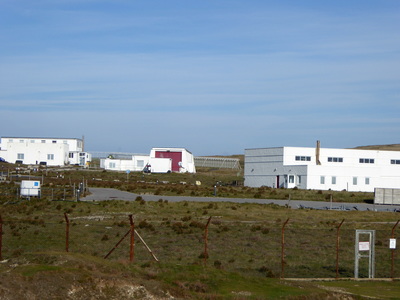 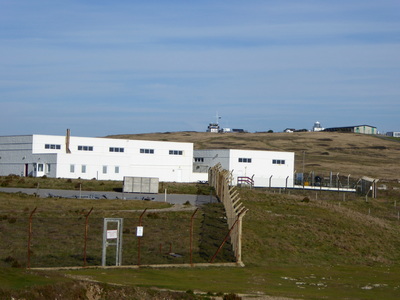 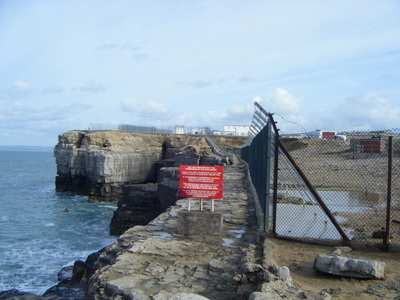 From the south, this sign is in place as a warning of the unstable area towards the Portland Raised Beach, and any walkers wanting to get closer to beach do so at their own risk. 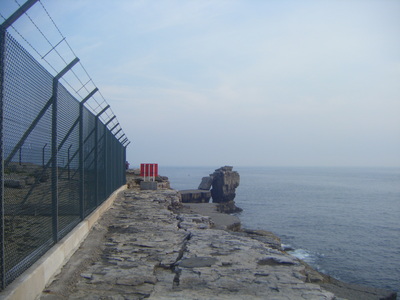 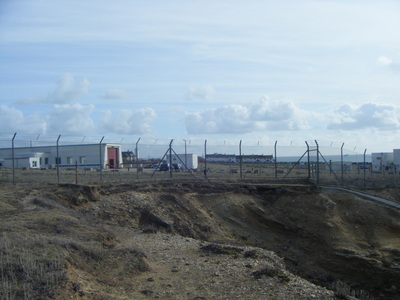 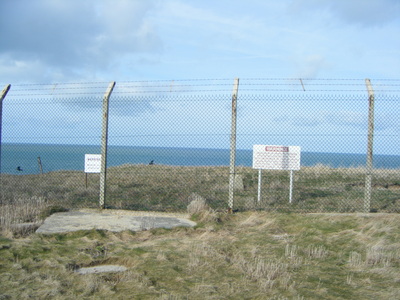 Further signs at the highest point, warning of unstable cliffs. 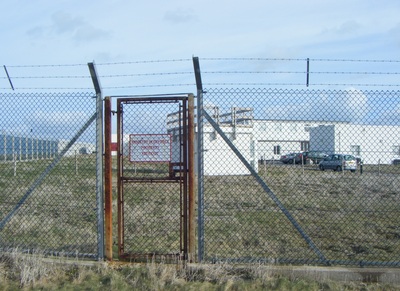 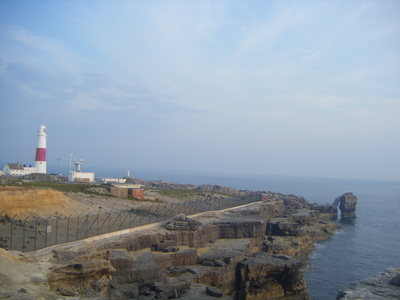 The viewpoint from this highest point. 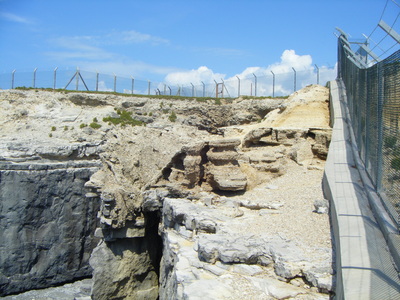 One part of the raised beach that lies outside of the boundary fencing. 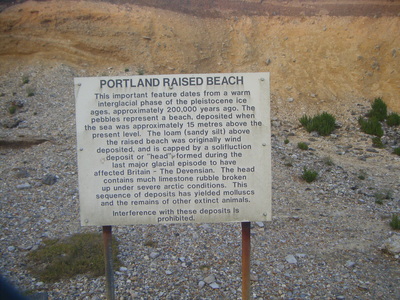 The raised beach sign that sits behind the MOD fencing.