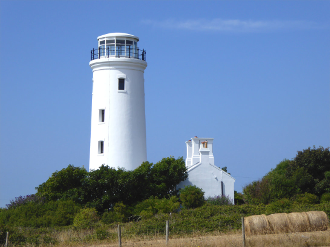 The Old Lower Lighthouse is a disused lighthouse at Portland Bill. Working alongside the Old Higher Lighthouse from 1716, the lower lighthouse has been rebuilt two times since; once in 1789 and again in 1869. After being decommissioned in 1906, the lighthouse went on to become the home of the Portland Bird Observatory and Field Centre in 1961, while the lighthouse (including its boundary walls and former quarters) has been a Grade II listed building since September 1978.

History
Original construction and operation of lighthouse (1716-1906)
For centuries, Portland's position in the English Channel, with its treacherous coastline, has made it a major shipping hazard. Both Chesil Beach and Portland Bill in particular have been the location of many shipwrecks. The narrow promontory of Portland Bill is notably dangerous because of its shallow reefs and ledges such as the Portland Ledge, the Shambles sandbank to the south-east, and the Portland Race - a tidal race caused by the clashing of tides, and further exacerbated by the reduced depths over the Portland Ledge. Prior to the construction of any lighthouse, beacons had been lit on Branscombe Hill, overlooking the Bill, since Roman times, while Portland's two windmills later acted as prominent landmarks to the north.

In 1669, Sir John Clayton was successful in obtaining a patent for the erection of a lighthouse with two lights at Portland Bill, despite the objections of Trinity House. However, as the patent specified that its upkeep would be dependent on voluntary donations from shipowners, Clayton was unable to secure an agreement and the scheme was abandoned. Towards the end of the 17th century, Captain William Holman of Weymouth began a petition for the erection of a lighthouse and in 1700 he submitted an application to have two lighthouses built. Despite support from shipowners and the Corporation of Weymouth, the application was rejected, with Corporation of Trinity House opposing the idea, believing that lights at the Bill would be "needless" considering the height of the land and the water being deep "to the very shore". Furthermore, the corporation argued that "shipowners could not bear the burden of their upkeep".

Regardless, local seafarers continued to petition for a lighthouse and managed to gain much public support, forcing Trinity House to later concede that a lighthouse at the Bill was necessary. The corporation submitted a patent in January 1716 which King George I granted on 26 May, by which time the corporation had already issued a 61-year lease to William Barrett, Francis Browne and Charles Langrishe at a price of £100 to build and maintain "one or more convenient lighthouses with good and visible lights to be kept continually there in the night season, so as ships might the better come to their ports without peril."

One lighthouse was built at the top of Branscombe Hill, while the other was placed a short distance to the south on lower land. Work had progressed far enough for the two lighthouses to shine out for the first time on 29 September 1716, with both producing their beams using coal inside glazed lanterns. Completion of keepers' accommodation and stores followed that November. The dues to be collected from all ships passing the Bill was set at a halfpenny per ton for English ships and a penny a ton for foreign ships.

Over time, Trinity House were informed by passing coastal traffic that Portland's lights were often poorly maintained and sometimes failed to be lit altogether. The corporation raised their concerns in 1751 and in the face of continued complaints decided to carry out an inspection in 1752, where they discovered "it was nigh two hours after sunset before any light appeared in either of the lighthouses" and that both lanterns were in a poor state of maintenance. Although the leaseholders soon carried out necessary repairs and changes, their application to renew the original lease in 1777 was denied and responsibility for the lighthouses reverted to Trinity House.

As the end of the 18th century approached and in light of complaints over the existing lights, Trinity House embarked on a modernisation and improvement scheme for Portland. Once work was completed in 1788 on installing a new lantern at the higher lighthouse, the lower lighthouse was demolished and rebuilt on a new site near the eastern side of the Bill in 1789 by the Weymouth builder William Johns for a cost of £2,000 and to the designs of Samuel Wyatt. The new lighthouse was built of Portland stone and stood 63 feet high, with a diameter of 20 feet at the base and 10 feet at the top. A marble tablet was installed over the doorway, with the inscription: "For the direction and comfort of navigators for the benefit and security of commerce: A lasting memorial of British hospitality to all nations. This lighthouse was erected by the ancient corporation Trinity House of Deptford Strond in 1789. Distance from the cliff 1608 feet."

The new lighthouse first shone out on 22 October 1789. Its copper lantern contained plano-convex lenses created by Thomas Rogers and six Argand oil lamps with reflectors, allowing for a beam of 18 miles. The success of the modernisation of both lighthouses was described in a contemporary report: "No expense was spared to make the lights as good as possible; and so well did they succeed that it often happened that the lights were visible till the distance was so great as to sink them below the horizon." Following its rebuilding, King George III, on one of his frequent trips to Weymouth and Portland, specifically requested to see the new lighthouse. In 1798, with the rising threat of invasion by Napoleon, Trinity House agreed to the installation of two 18lb cannons at the lighthouse.

In 1824, Trinity House carried out improvement works at the lighthouse to increase the power and magnitude of its fixed light. Further navigational aids at Portland Bill followed during the 19th century, with the erection of a white stone obelisk at the Bill Point in 1844 and the placing of the first lightship at the Shambles sandbank in 1859. Meanwhile, in 1856, Trinity House provided the lower lighthouse with new optics, oil lamps and keepers' accommodation as part of a £1,050 scheme for Portland's lights. The higher lighthouse's height was raised to increase its range and allow similar adjustments to be made to the existing light.

Despite this, the corporation sought tenders in 1865 for the demolition and replacement of both lighthouses, including their associated keeper dwellings, to improve range and visibilty. The new lighthouses were designed by James Nicholas Douglass and their construction completed during 1867, although the new quarters and other work was not completed until late 1869. The contract for the construction and erection of the lanterns was given to Chance Brothers and Co and the two first-order fixed optic lens were constructed at their factory in Smethwick, West Midlands. The lower light was first lit during October 1867.

Decommissioning of lighthouse and subsequent use (1906-60)
In 1901, Trinity House made the decision to replace the lighthouses with a single one at Bill Point. In addition to the increasing importance of Portland Harbour and its naval station, the harbour's complete enclosure with the construction of two new breakwater arms between 1896-1905 led Trinity House to consider a potential re-organisation of the existing lights at Portland. At Portland Bill, they felt that the two lighthouses had become obsolete and only a newly-constructed lighthouse was able to meet all modern navigational requirements, particularly in light of the loss of approximately fifteen vessels off Portland in storms during 1901. Construction commenced in October 1903 and was completed in late 1905. The new Portland Bill Lighthouse first shone on 11 January 1906, allowing the lower and higher lighthouses to be decommissioned. The lower lighthouse's lamp and other equipment was quickly removed, while some of its buildings were also cleared.

The two lighthouses were auctioned in February 1907 by the Weymouth-based firm Messrs Milledge and Son, who described the properties as "most substantially erected and capable, with a small outlay, of being converted into bungalow residences, the situation being exceptionally charming and the healthiest along the sea coast." Although the higher lighthouse sold for £405, the bidding for the lower lighthouse failed to reach the reserve of £400. It was withdrawn but sold later that month by private treaty and was subsequently converted into a summer residence.

Over the course of the early 20th century, the lighthouse saw use as a summer residence and for a time as the Longstone Ope Tea Rooms and Gardens. By the mid-1930s, the Lower Lighthouse Guest House and Restaurant had been established there by Mrs. Broomhead. The lighthouse was then left empty and derelict after World War II.

Conversion into and use as a bird observatory (1960-)
In 1951, bird migration studies was established on Portland through the pioneering ornithologist Dr Ken Rooke and his colleagues. Over the next decade, the ornithologists visiting the island were accommodated in temporary facilities such as caravans or at the RN Portland Bill W/T Station at Branscombe Hill. The opportunity to create a permanent centre for ornithologists was made possible when the lighthouse was put up for sale and purchased by Miss Helen Brotherton of Canford Cliffs. At the time, another interested party had proposed turning the former lighthouse into an amusement arcade. Brotherton's decision to purchase and restore the lighthouse was to preserve Dorset's "relatively unspoiled coastline" and create "an ornithologist's dream". The conversion and restoration work was completed in 1961, which included the creation of an observation platform of aluminum and glass designed by the British Aluminum Company. The Portland Bird Observatory and Field Centre was officially opened by Sir Peter Scott on 18 March 1961.

The observatory became a registered charity in 1962. Today, it caters for all kinds of naturalists, while hostel-style accommodation is available for up to 24 guests at a time. The main accommodation is located in the lighthouse and annexe, while an adjoining self-contained cottage holds up to four people. The garden at the lighthouse remains one of the few vegetated areas at the generally-exposed Portland Bill and is therefore used by many species of birds. 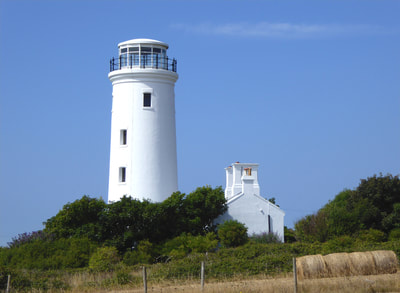 The Old Higher Lighthouse from the east. 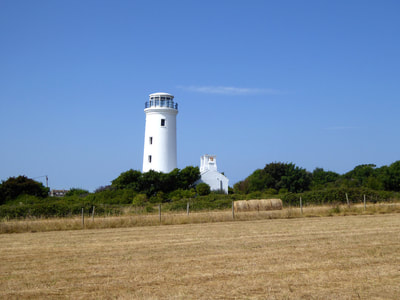 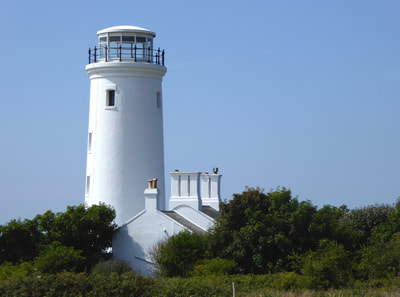 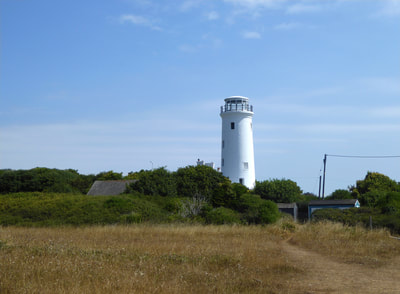 The Old Lower Lighthouse from the west. 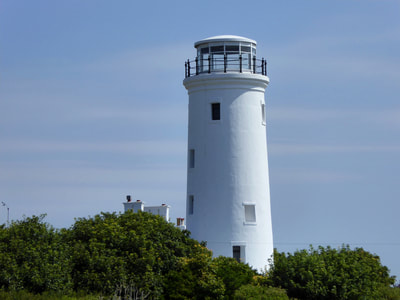 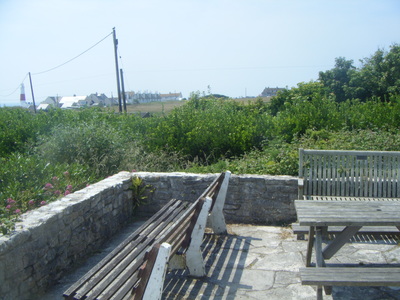 From the lighthouse's patio area, looking out to Portland Bill Lighthouse. 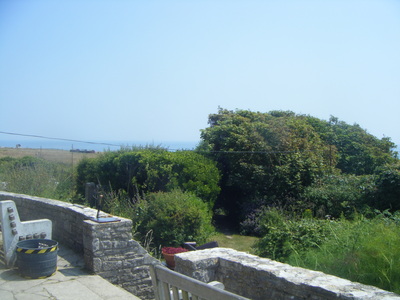 The foliage of the lighthouse's garden is unusual for Portland Bill's exposed area. 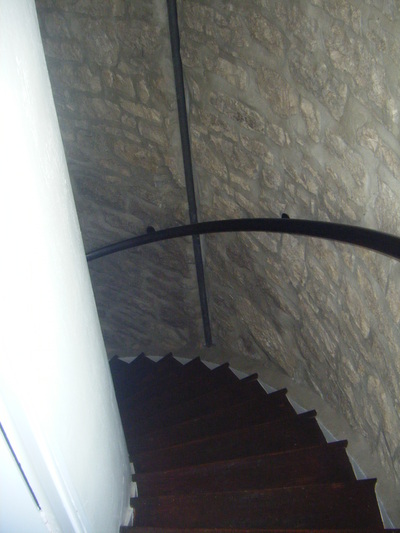 The stairway of the lighthouse. 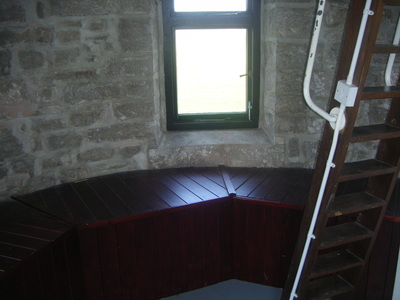 The ladder on the right leads up to the top of the lighthouse. 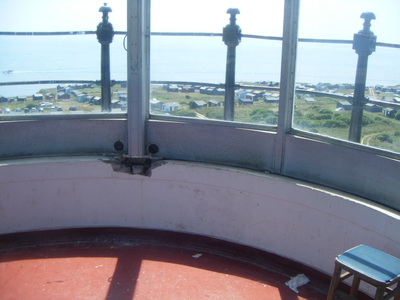 The top of the lighthouse. 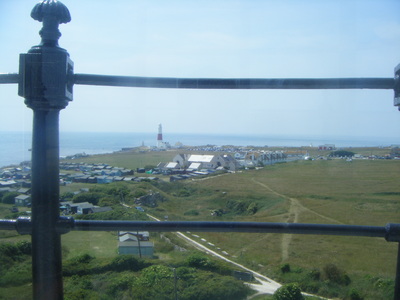 Portland Bill seen from the top of the lighthouse. 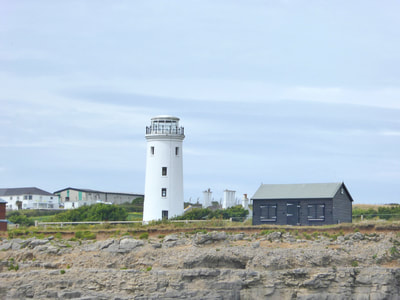 The lighthouse as seen from the sea. 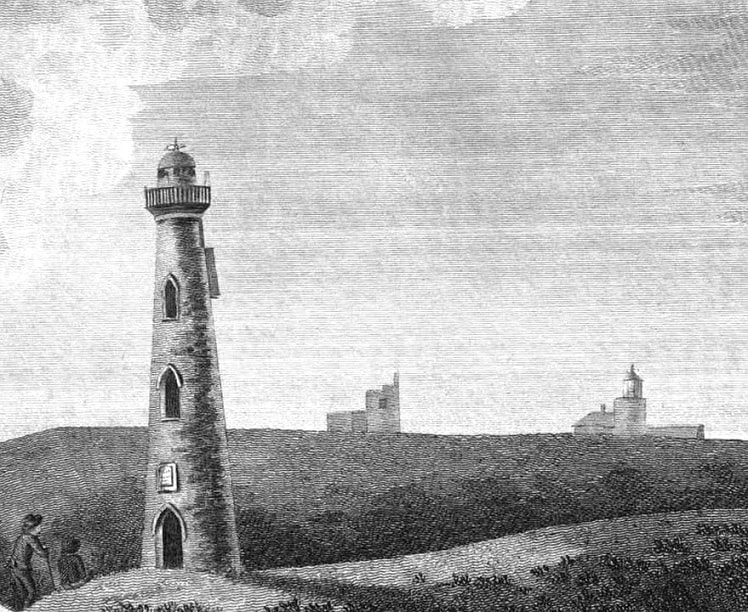 This anonymous engraving of c. 1800 shows the Lower Lighthouse as rebuilt in 1789, replacing the original 1716 one. In the background, the building on the far right is the Higher Lighthouse. 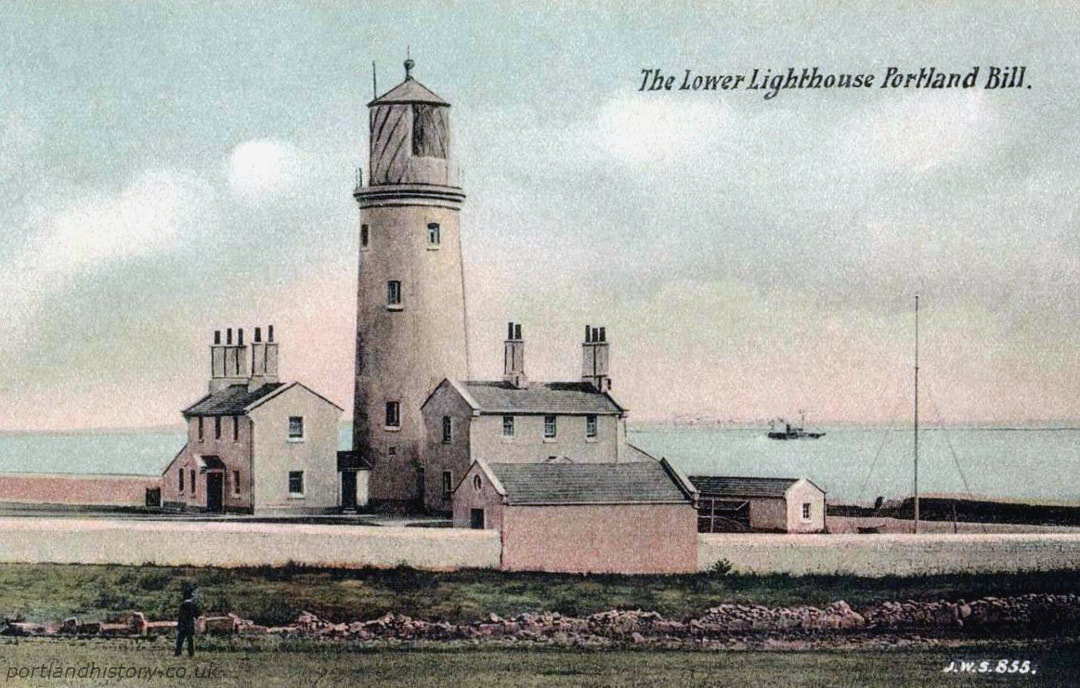