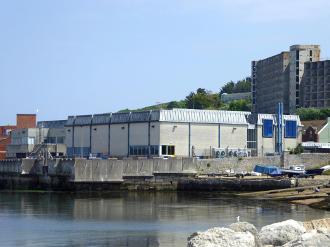 Osprey Leisure Centre is a community leisure and sports facility in Castletown. Originally known as the Boscawen Centre, it was built in the 1980s as a physical and recreational training centre for Royal Naval personnel based at Portland. When the Royal Navy departed the island with the closure of RNAS Portland in 1999, the swimming pool was opened to the public by Weymouth & Portland Borough Council. The entire centre was opened to the public for the first time in 2007 by the South Dorset Community Sports Trust, who continue to run it under its new name Osprey Leisure Centre, as a recreation and sports facilities for the local community.

Aside from the swimming pool, the centre's other facilities include a large indoor sports hall, two squash courts, three fitness suites, a café known as the Legacy Café, the Hairport Salon, the Beauty Hideaway salon, and a conference room, as well as a private slipway and limited boat storage space.

History
Construction of Boscawen Centre and use by the Royal Navy (1984-99)
The Ministry of Defence first revealed plans for a new Royal Navy wardroom complex on Portland in 1974. The chosen location was Merchant's Incline, close to the naval base and the village of Castletown. The proposed development did not come to fruition until the following decade, when in 1984, work started on the Hardy Site, made up of a wardroom complex and senior rating's mess. As part of the scheme, a state-of-the-art Royal Navy sports centre was also to be built at Castletown, opposite the two new accommodation buildings. Plans for a sports centre also dated back to the 1970s, with the Property Services Agency having undertaken a feasibility study into a 'physical and recreation training centre' in May 1977.

The centre's foundation stone was laid on 23 May 1984 by the Vice Admiral Sir Simon Cassels K.C.B. C.B.E., Chief of Naval Personnel and Second Sea Lord. Designed by the Design Standards Office of the Property Services Agency, the centre was built by A. Monk & Co plc. The concrete blocks for the building were provided by RBS Brooklyns and Forticrete Ltd. Construction work continued into the following year, and on 10 December 1985, the Boscawen Centre was officially opened. It was named after the boys' training ship HMS Boscawen, which had been moored in Portland Harbour between 1862 and 1906. The centre featured a 25 metre, six lane swimming pool, a double-sized sports hall, three squash courts, tennis courts, a multi-gymnasium, featuring a fitness suite and weights room, as well as staff offices and a two-storey sailing centre. On-site parking for both vehicles and boats was also created.

The building's design was greatly influenced by the nearby 16th century Portland Castle. With its frame and all floors made of reinforced concrete, the centre was largely built using concrete blocks. In order to add "textual interest", and to match the area's existing Portland stone walls and buildings, the exterior was dressed with exposed, light-coloured, limestone aggregate. The roof, made up of lead-faced timber panels, was designed to compliment the castellated rooftop of the nearby castle. As part of the external landscaping, the parking facilities were laid with concrete paving of contrasting colours. Additionally, the existing low sea wall, built of Portland stone, had a new wall of reinforced concrete built atop. The new wall used exposed aggregate panels on its landward side, while the seaward side was designed to complement the modelling of the castle.

The centre quickly became established as the main hub for all naval sport and recreational activities at Portland. Its facilities were available for use by all Royal Navy personnel serving at HM Naval Base Portland, HMS Osprey and RNAS Portland, as well as visiting ship's companies and MOD civilians. Limited allowance was also made for local residents and clubs to use the centre. Originally, the Ministry of Defence had approached Weymouth & Portland Borough Council with the offer of opening the facilities to the public at certain times, but the council were unwilling to contribute towards operating costs or provide lifeguards during public sessions. As a result, there was only limited public use of the centre during its use by the navy.

Closure of naval base and initial public opening of centre by the council (1999-2007)
With the end of the Cold War and dissolution of the Soviet Union in 1991, a reduction of the UK's defence budget led to the announcement of HM Naval Base Portland's closure in late 1992. FOST operations ceased in July 1995 and the base was closed and sold in 1996, leaving the Boscawen Centre to primarily be used by personnel of RNAS Portland.

In 1999, the South Dorset Community Sports Trust (SDCST) was established as a charitable organisation to "address the lack of affordable sports and recreational facilities available in the area of South Dorset, especially Portland and Weymouth". With RNAS Portland's closure in 1999, the trust's objective was to acquire the Boscawen Centre from the Ministry of Defence. In the meantime, Weymouth & Portland Borough Council opened and managed the swimming pool for public use.

The MOD sold the centre in July 2000 to developers Comer Homes, who were, at the time, planning the redevelopment of the Hardy Site opposite. With the borough council committed to keep the pool open until March 2001, both the Poole Sports Trust and SDCST had expressed interest in leasing the centre from the new owners. In March 2001, Comer Homes announced plans of a possible 35 year lease to the SDCST, who in turn would seek grants to transform the centre. However, such a lease was not possible until the redevelopment of the Hardy Site was approved. In the meantime, the borough council continued to run the pool on a temporary contract, set to expire in May 2005.

Over the years, the swimming pool became a popular community asset, but lack of funds saw it fall into a state of disrepair, resulting in a temporary closure in late 2005. As plans and talks continued on the redevelopment of the Hardy Site, Comer Homes announced plans in late 2002 to transform Hardy Site into 363 apartments with an additional 191 new homes built on the site. As part of the scheme, the developers proposed the possible refurbishment of the centre. The suggested plan included Comer Homes leasing or handing the building to a charitable sports trust, while offering to contribute towards repair costs or pay the trust £100,000 to carry out the work themselves. At the same time, the SDCST announced they were looking toward Sports Lottery funding, in order to raise up to £2 million for the centre, which would allow it to be fully opened to the public.

New ownership and opening as the Osprey Leisure Centre (2007-)
Although planning permission for the Hardy Site was approved in August 2004, work wouldn't begin until 2006, after a revision to the plans was approved in March that year. With work on the complex underway, the borough council, who had continued to run the pool, transferred the Boscawen Centre to the SDCST in April 2007. As part of the transfer, the council agreed on a five-year phased funding arrangement, amounting to £160,000. The trust held an open day at Osprey Leisure Centre on 7 May 2007 and hundreds of visitors attended to watch the official opening by South Dorset MP Jim Knight.

Upon opening, the trust worked closely with the community and local authorities to transform the centre. They were also successful in obtaining several grants to buy equipment and carry out improvements, and £60,000 had been spent on the centre by May 2008. The centre received 35,000 visitors in its first year, and in May 2008, it was revealed that it was receiving more users a week than ever before. It was calculated that overall visits, including special bookings for the coming year amounted to over 55,000.

Originally facing high operational costs, the trust spent the following years looking at reducing maintenance costs and seeking funding. By 2010, it was struggling to meet the rising costs that then amounted to £120,000 per year. That year they worked with two energy experts, and in contribution towards reducing costs, they embarked on a number of schemes. The centre received a new pool cover, replaced its gas boilers with a high efficiency air source heat pump system, and began using low energy lighting, inverters and an associated chemical dosing system. Additionally, in April 2012, the Olympic gold medallist Ben Ainslie unveiled forty new solar panels that had been installed on the centre's roof as part of the British Airways' One Direction Carbon Fund project. The centre was the first place in the country to benefit from the project. It was announced in 2014 that the trust had saved over £100,000 on energy costs. In 2016, it was also revealed the trust had saved 81% in gas and 53% in electricity bills, despite the increase in users of the facilities.

The trust secured £50,000 of Olympic legacy funding in April 2012 from Sport England's Inspired Facilities Fund, and in June received a further £82,000 from the borough council. The combined funding was used to improve disabled facilities at the centre, as well as the opening of a new cafeteria, which were completed in September. On 29 August 2012, disabled artist Sue Austin used the centre's pool for a few consecutive days for a choreographed underwater performance named Creating the Spectacle. As part of the Maritime Mix Cultural Olympiad by the Sea programme, the performance celebrated the start of the Paralympic Sailing events hosted in Portland Harbour.

Following the 2012 Olympic Games, the centre, along with other similar facilities in the local area, reported a boost in visitor numbers for 2013, due to the legacy of the Games and the extra funding received. Celebrating the trust's ninth year of running the centre in 2016, visitor numbers have been reported to have reached 100,000 per year. They celebrated the tenth anniversary with an open day in January 2017.

Awards
At the Wessex FM Local Business Awards of 2014, the trust won the Going Green Award, based on their commitment to becoming more environmentally friendly. In May 2016, they won the national award for Exceptional Social Enterprise Improvement at the Sporta Awards. The award commemorated the trust's development of the centre and their community involvement. At the Dorset Echo Industry Awards of July 2016, the centre was one of three local organisations shortlisted for the Best Community Engagement – Sponsor Active Mobility award.

References
The following is an A-Z list of key references for this page. 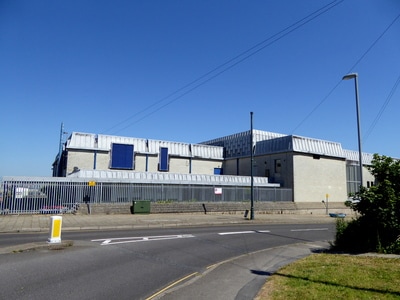 Osprey Leisure Centre as seen from outside the Hardy Complex. 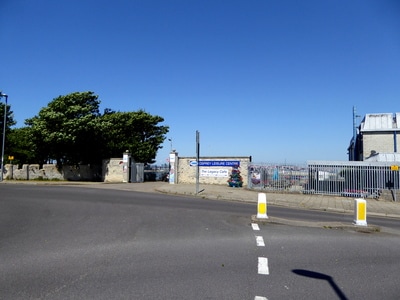 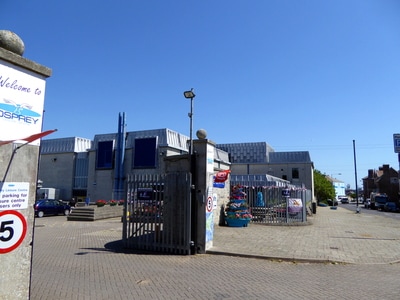 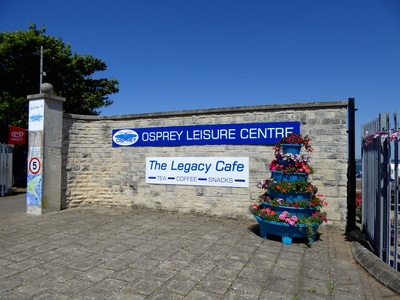 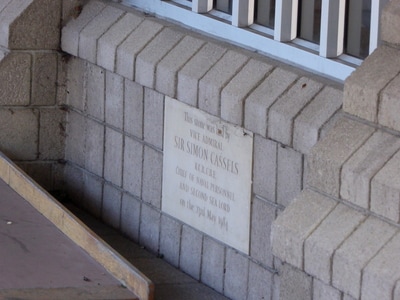 The foundation stone at the entrance to the centre. 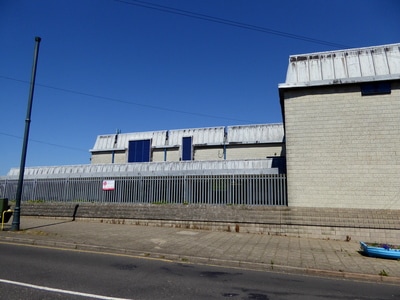 The side of the building as seen from Castletown's road. 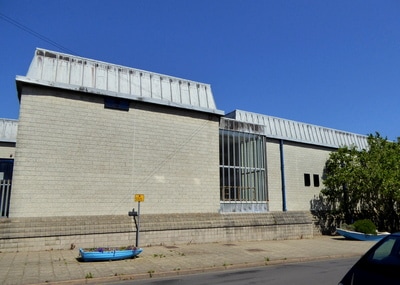 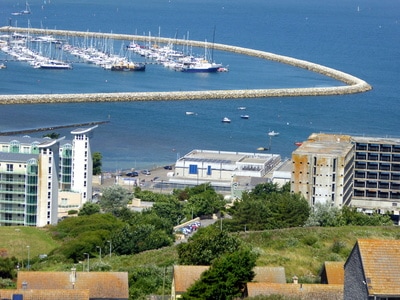 The centre, seen here from the top of Verne Hill, with the two accommodation blocks of Hardy Site on either side. 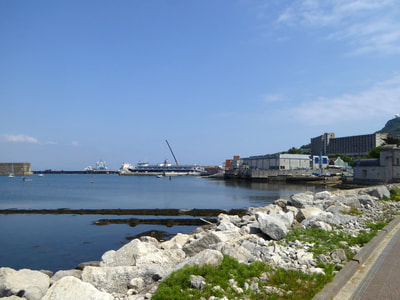 The centre seen from near Portland Marina, with Portland Castle on the far right and Castletown Pier to the left. 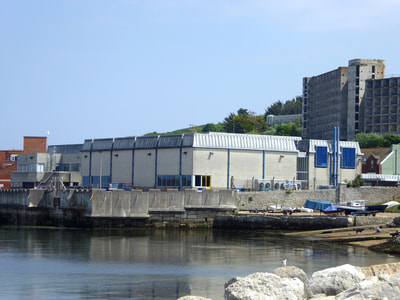 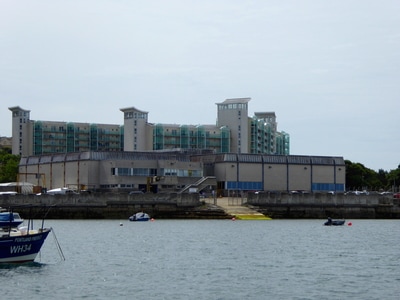 The centre as seen from the sea.