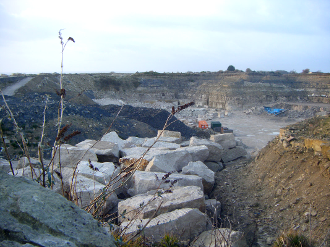 Perryfield Quarry is an active stone quarry of 20th century origin and part nature reserve to the east of Weston and south of Wakeham. The area was formally designated as a nature reserve in 1998 and is managed by the Butterfly Conservation. It remains a valued home for a number of butterfly species and other wildlife.

The working quarry area is one of the largest active quarries on Portland, operated by Portland Stone Firms Ltd, along with Broadcroft and Coombefield Quarries. Originally worked as an open cast quarry, extraction switched to mining techniques in 2017. It is largely quarried for Perryfield Basebed, Roach, Shelly and Whitbed stone.

Perryfield's nature reserve forms part of the Portland Quarries Nature Park, which opened in 2013 and also includes reserves at Broadcroft, King Barrow and Tout Quarries, Verne Common, and sections of Inmosthay and Bowers Quarries. The forming of the nature park has allowed for the restoration, enhancement and better management of its various sites, while also improving public access to them. Restoration of the ecological habitats includes the removal of harmful and invasive plant species, while archaeological and industrial features relating to past quarrying are preserved. Habitat management ensures that wildlife suited to limestone grassland can continue to thrive.

Quarry history
Portland's stone industry traditionally operated from clifftop sites, until the 19th century, when quarrying gradually began moving inland. Into the late 19th century, inland quarrying around Wakeham and Weston was limited to small-scale sites such as Bottom Combe and Wakeham Quarries, and larger operations at both Coombefield and Suckthumb Quarries. While Coombefield and Suckthumb continued to expand in the early 20th century, only a small section of Wakeham Quarries had encroached onto Perryfield in the 1920s.

In 1931, the South Western Stone Company Limited established themselves on the island and opened two small quarries at Perryfield, and another on the other side of Weston Street. Perryfield House, a late 19th century house, was transformed into the company's offices by 1933. Major expansion of Perryfield followed in the mid-20th century, by which time Perryfield was operated by Bath & Portland Stone Firms, who went on to acquire the South Western Stone Company in 1961. By the 1960s, the quarry spanned along Pennsylvania Road, with a large stone works, Perryfield Works, being erected within the southern region of the site, behind Perryfield House.

Further expansion of the quarry was seen in the late 20th century and has continued into the 2010s as the site has continued to expand westwards. Today Portland Stone Firms Ltd operates Perryfield, along with two other quarries on Portland; Coombefield and Broadcroft. As the firm's main production site, Perryfield will continue to operate until 2042. Originally worked as an open cast quarry, Dorset County Council gave permission for extraction to be switched to mining techniques in 2016. In addition, some areas of the quarry are used by Portland Stone Limited to provide aggregate. The stone goes through the process of being blasted, extracted, crushed, screened and then tested.

From the 1980s and into the 2000s, Perryfield Works and House was occupied by Cosens Engineering Ltd. In the early 2000s, plans were made for the demolition of the works, allowing the site to be developed for housing. An original application for the construction of 25 dwellings was refused in 2003 and dismissed on appeal in 2004. Although a similar scheme was approved later that year, it would be replaced by a new development involving the creation of 66 dwellings. Approved in 2008, Perryfield Works was soon demolished and work began on Pennsylvania Heights, which is still undergoing further development to date.

Nature reserve
By the late 20th century, the abandoned, infilled area of Perryfield, largely to the north of the site, had been reclaimed by nature and wildlife. In 1998, Portland Stone Firms came to an agreement and leased the site to the Butterfly Conservation organisation, allowing the 1.2 hectare area to become a designated nature reserve, known as the Perryfield Quarry Nature Reserve or Perryfield Quarry and Butterfly Reserve. Perryfield was the second nature reserves managed by Butterfly Conservation on Portland; the other, at Broadcroft Quarry, became a reserve in 1994.

Since its designation, Butterfly Conservation have aided the reserve's restoration through careful management, including tree regeneration and the removal of unwanted scrub. The reserve's limestone grassland provides a rich array of wildflowers, such as common bird's-foot-trefoil, horseshoe vetch, kidney vetch, ivy broomrape, Alexanders, large bindweed, white bryony, wild madder and charlock. These flowers provide suitable conditions for butterflies and other insects such as the grey bush cricket. The sheltering copse of sycamores, as well as the scrub-covered slopes down to the former route of the Easton and Church Hope Railway, are frequented by migrating birds arriving to or leaving Portland. The area is also considered one of the best sites on the island for glow-worms.

Wildlife
There are many species of butterfly to be seen in the reserve. Most notable is the silver-studded blue, which have established colonies in the reserve. Other butterfly species include small blue, chalkhill blue, dark green fritillary and Adonis blue. Grassland species include dingy skipper, small and large skipper, ringlet, meadow brown and marbled white, while there are migrant species such as the painted lady and clouded yellow. Moth species include the Portland ribbon wave, beautiful gothic, valerian pug, six-spot burnet, four-spotted moth and cinnabar. Some of the many species of birds seen at the reserve include warblers, green woodpecker, raven, peregrine falcon and kestrel. 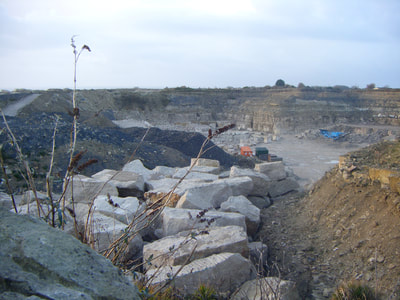 Part of Perryfield Quarry, seen in 2012. 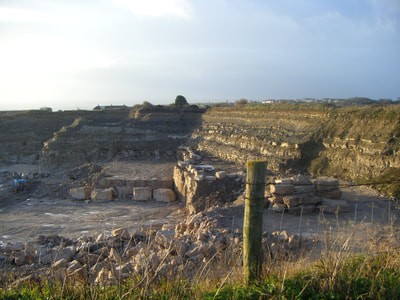 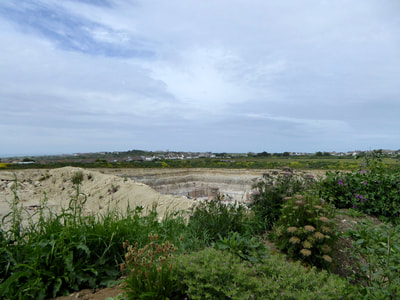 In 2016, open cast quarrying switched to mining at Perryfield. An entrance to the mine can be seen at the centre of this photograph. 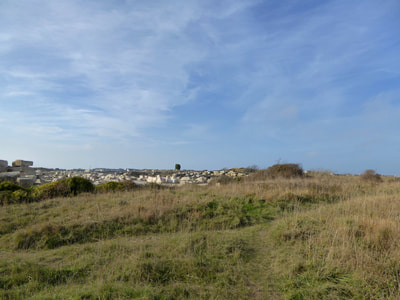 A photograph taken on the edge of the nature reserve section at Perryfield. 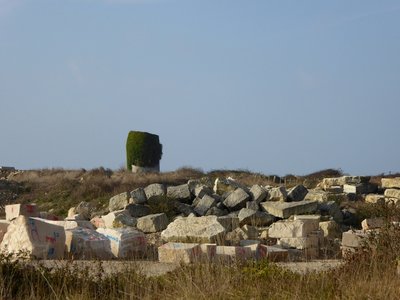 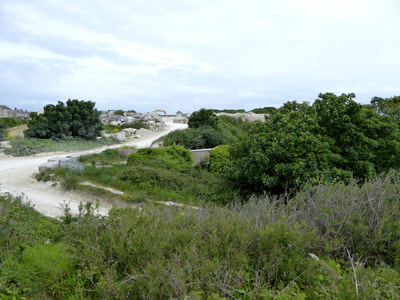 At the western end of the reserve is more quarrying activity. A surviving bridge of the Easton & Church Hope Railway line can be seen in the centre. 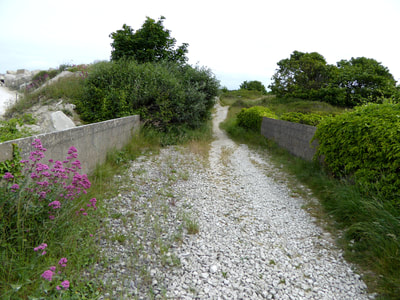 The former railway line ran through this area and turned towards Easton from the eastern side of Portland.