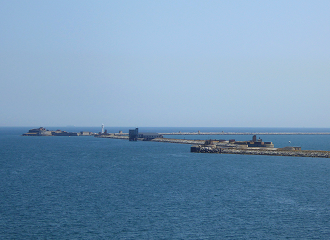 The Pier Head Batteries are a series of three former gun batteries spanning the two northernmost breakwater arms of Portland Harbour, the north-eastern breakwater and northern breakwater. The three batteries were based on and around A, B and C Pier Heads. They were established in 1904-05 and used until 1956 to defend the harbour's north and east ship channels.

The surviving emplacements and pre-1945 buildings of all three batteries are Grade II listed as part of the listing of the breakwater arms. Each pier head has an approximate diameter of 30 metres.

History
New breakwater works and temporary anti-torpedo boat defences (1893-1905)
The Pier Head Batteries were established in response to the growing threat of torpedo boat attack during the late 19th century, to which Portland Harbour was considered particularly vulnerable. At the time, Portland was developing as an increasingly important station for the Royal Navy, following the creation of a harbour of refuge there with the building of two breakwater arms in 1849-72. Despite the value of the existing breakwaters, the northern region of the harbour remained exposed between the Breakwater Fort and Weymouth. Furthermore, the fortifications established during the mid-19th century had become obsolete and their guns ineffective against fast-moving torpedo boats. As naval warfare continued to advance at an unprecedented rate, rifled muzzle-loading (RML) guns were superseded by quick-firing (QF) and breech-loading (BL) guns, and a range of new technology was available for coastal defence including searchlights, and range-finding and telephonic equipment.

To combat the torpedo boat threat at Portland, proposals were made in 1892 to either install a boom spanning the open gap across the harbour or construct a further two breakwater arms. The Admiralty chose the latter option and wrote to HM Treasury in 1893, where they described Portland as "one of the most important places in the United Kingdom for our battleships", but it was "at present undefended against torpedo attacks". As such a scheme was estimated to take approximately ten years to complete, a quick, temporary measure was also sought for the interim. Plans were drawn up for the construction of a 600-yard bank of stone spanning from Bincleaves and a line of dolphins, structures of iron and timber, between which boom defences "strong enough to resist the onslaught of a torpedo boat" would be installed. Construction of these temporary measures were carried out in 1894-95.

Five of the twelve dolphins were fortified with QF 12-pounder naval guns, which were effective weapons for close defence against torpedo boats. These dolphins were also each provided with a building to accommodate the gun crews and ammunition. The original intention was to arm the dolphins with twenty-four QF 6-pounder guns but this was altered in 1894 to ten QF 12-pounders. Meanwhile, the same period saw Portland's coastal defences modernised and expanded. The Inner Pier Head Fort was modernised in 1897-99 to accommodate two QF guns and a Maxim machine gun, and the Breakwater Fort also received two QF guns in 1898. New batteries were built on land; Blacknor (1900-02) and Upton (1901-03) providing additional protection over the western and eastern approaches to Portland.

The scheme for the new breakwaters received parliamentary approval in 1895 through the Naval Works Acts of 1895-96 and preliminary work began at the end of 1895. The new breakwaters were constructed from 1896 in accordance with the positions of the dolphins, with hopper barges being used to drop the stone in place within the harbour. Apart from some further work on the three pier heads, which continued into 1905, the completion of the breakwaters was announced in the Naval Estimates of 1904-05.

Establishment and use of Pier Head Batteries (1904-1939)
While the new breakwaters and boom defences spanning the entrances to the harbour greatly diminished Portland's vulnerability to torpedo attack, the three pier heads were also fortified to provide additional protection. "A" Head was built opposite the Breakwater Fort overlooking the east ship channel, and "B" and "C" Heads faced opposite one another at the north ship channel. Work on fortifying the pier heads began in November 1904 and was completed in February 1905 for a cost of £1,572. Each head was armed with two QF 12-pounder guns and a Maxim gun. Shelters and ablutions were provided in buildings on the breakwater arms alongside each battery, while the magazine levels directly below the heads provided stores for cartridges and shells, along with another shelter for eight men. The three batteries worked in conjunction with a number of defence electric lights (DELs). By 1905, two fixed lights were located on the middle of the northern breakwater, three fixed lights at the Breakwater Fort and two concentrated moveable lights on the outer breakwater.

The original armament arrangement of the three batteries proved short-lived as proposals were soon made for the installation of two BL 6-inch Mk VII naval guns, one each at B and C Heads. In 1905, the War Office proposed installing four of these guns at the Breakwater Fort, two on the roof and two at original gun floor level. Those intended for the roof were installed in 1909, but it was decided that the other two should be sited at B and C Heads, and plans to accommodate them there were drawn up in 1907. It was proposed to construct each new BL gun emplacement over an existing QF one. To accommodate the loss of the two QF positions, four new emplacements would be built on the arms adjacent to the heads, two at B and two at C. An alternative drawing for the proposed BL gun emplacement at B Head suggested building it adjacent to the pier head, leaving the existing QF positions unaltered.

The work was carried out in 1910 and the two BL guns were subsequently installed. The BL gun emplacement at B Head was built over the right QF emplacement and the one at C Head built over the left QF emplacement. No new QF emplacements were built at C Head; instead four were built along the arm adjacent to B Head. With the installation of the BL guns, the two QF guns at C Head were moved to B Head. As part of the upgrades to the batteries, new shelters and other ancillary buildings were also erected on the breakwaters, and magazines converted from existing buildings to be closer to the guns. The main shelter for B Head, with ablutions and cookhouse, was built to accommodate three officers and 66 men.

During World War I, the armament of the batteries remained as two QF guns at A Head, one BL gun at C Head, and one BL and four QF guns at B Head. The BL guns were later removed in the 1920s; the one at C Head being removed in 1924 and placed in storage at the Drill Hall. Two of the QF guns at B Head were removed during the same period and the remaining two moved to C Head in 1934, leaving B Head unarmed. Defence electric lights operating at the time included two at C Head and four at the Breakwater Fort.

Use of batteries in World War II (1939-1945) and decommissioning (1956)
In 1940, proposals were made to replace the remaining QF 12-pounder guns with two QF twin 6-pounder guns. The following year saw plans drawn up for the construction of their emplacements, one at A Head and one at B Head, with a director sight tower to be built directly behind the guns. They were to be worked in conjunction with eight searchlights, three each at A and B Heads and two in the middle of the north-eastern breakwater arm. The emplacements were built in 1944, but the guns were not installed until 1953.

During World War II, a number of new buildings connected with the batteries and defence of the harbour were erected on the breakwater. In 1940, A Head received a Bofors 40mm gun as an anti-aircraft defence. The north and east ship channels were protected by observation minefields, which were in place between 1941-42 and controlled from A and B Heads. Other anti-invasion measures included naval flamethrowers with Merlin engines at all three heads and the installation of depth charge throwers. The two ship channels were also protected by torpedo firing positions. The north channel was protected by two positions at the long range on the northern breakwater and three at B Head, while the east channel had three at A Head and two at the Whitehead range on the north-eastern breakwater.

Between 1940-42, new fixed lights, by then known as coast artillery searchlights (CASLs), were installed: two at C Head, three at B Head, two on the north-eastern arm and two at A Head. A number of fixed and fighting lights were also added to the Breakwater Fort. In 1944, C Head was recorded as holding an array of other weaponry in addition to its QF guns, including two Bofors guns, two Bren light machine guns, one Lewis light machine gun, one Hotchkiss gun, one twin M2 Browning gun, one 29mm Spigot Mortar and a 3-inch Harvey Projector.

During the final years of their use, the Pier Head Batteries served as practice batteries for the territorial army. CASLs recorded in 1954 included three at B Head, two at A Head, two at the centre of the north-eastern arm, two at C Head and two on the northern breakwater. The UK's coastal defences were decommissioned in 1956, including those at Portland, and the guns of the Pier Head Batteries were removed around this time. 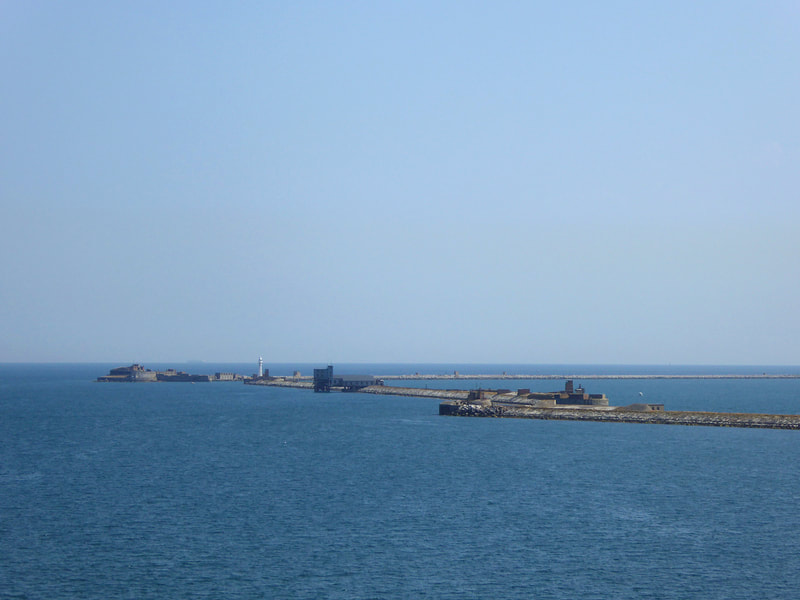 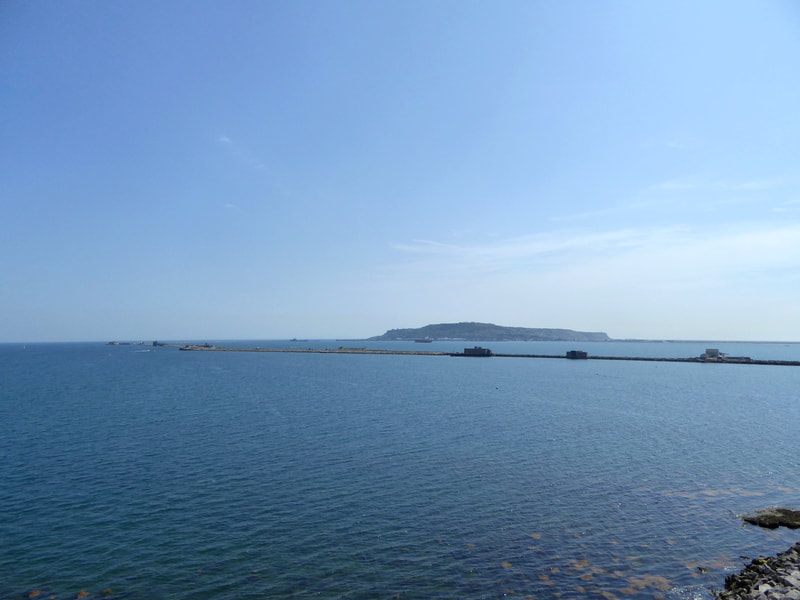 The northern and north-eastern breakwaters. Both were built in 1896-1905 to enclose the northern region of the harbour and protect it against torpedo boat attack. 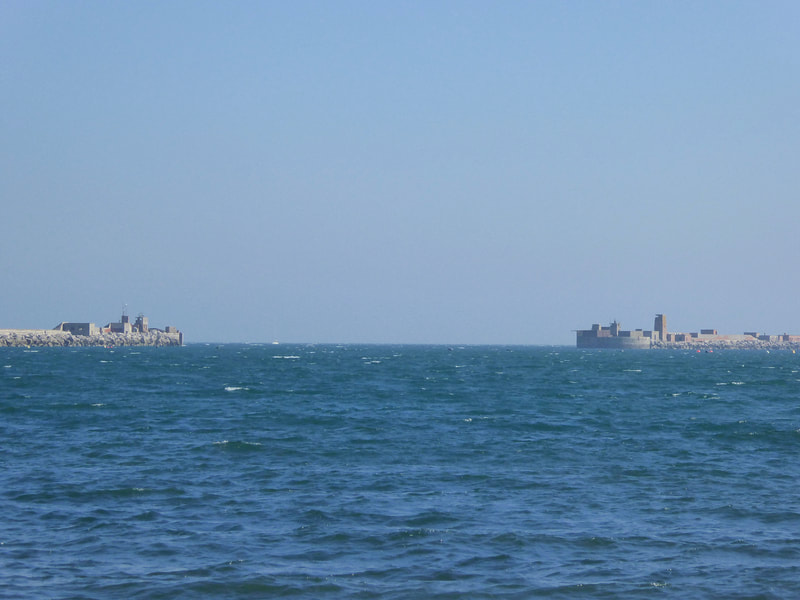 C Head (left) and B Head (right) at the north ship channel, as seen from near Bincleaves. 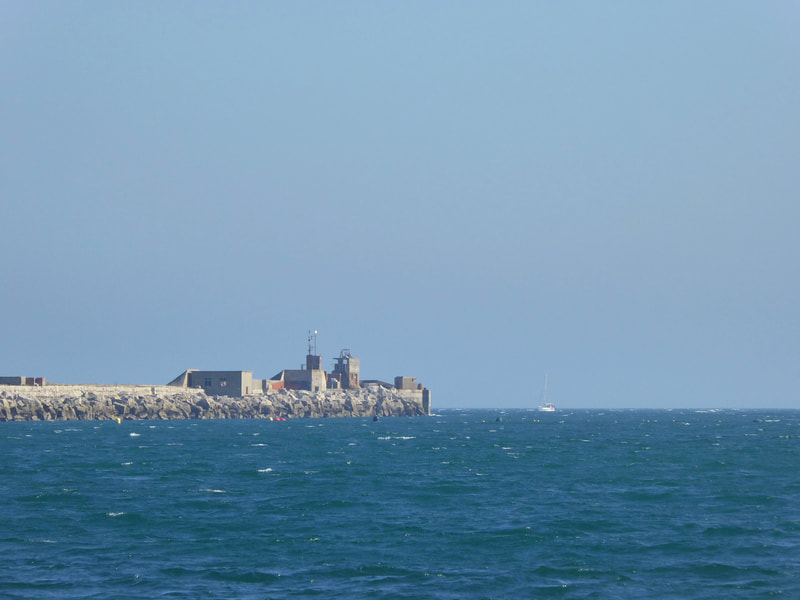 A closer look at C Head. 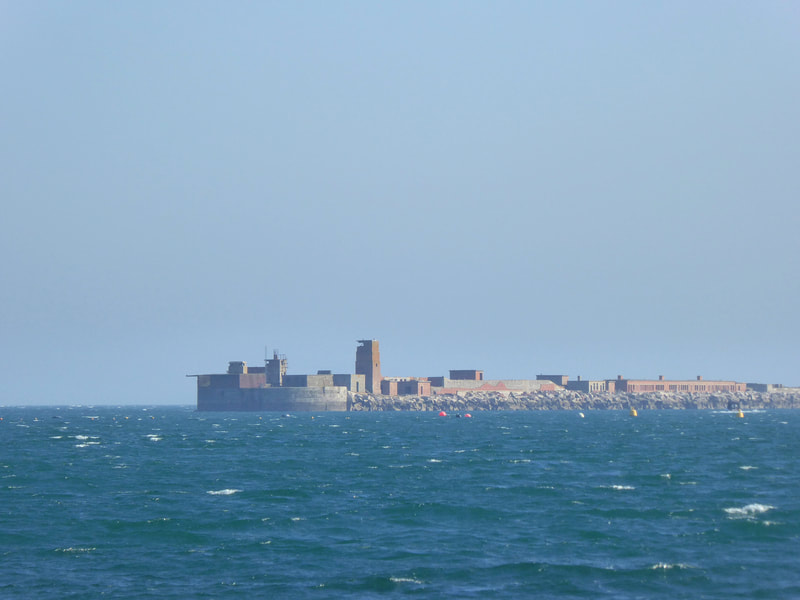 A closer look at B Head. 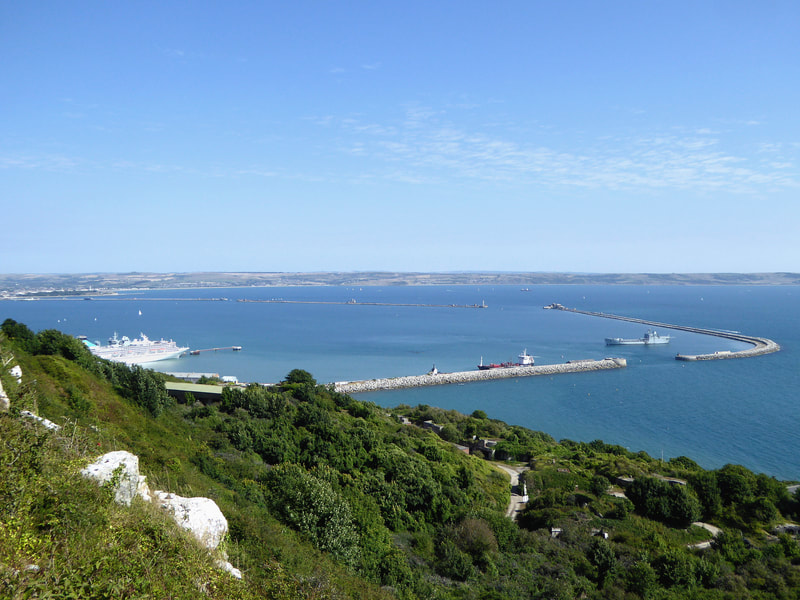 Portland Harbour and its four breakwaters as seen from East Cliff. All three positions of the pier head batteries can be seen in the distance. The two closest breakwater arms were built in 1849-72. 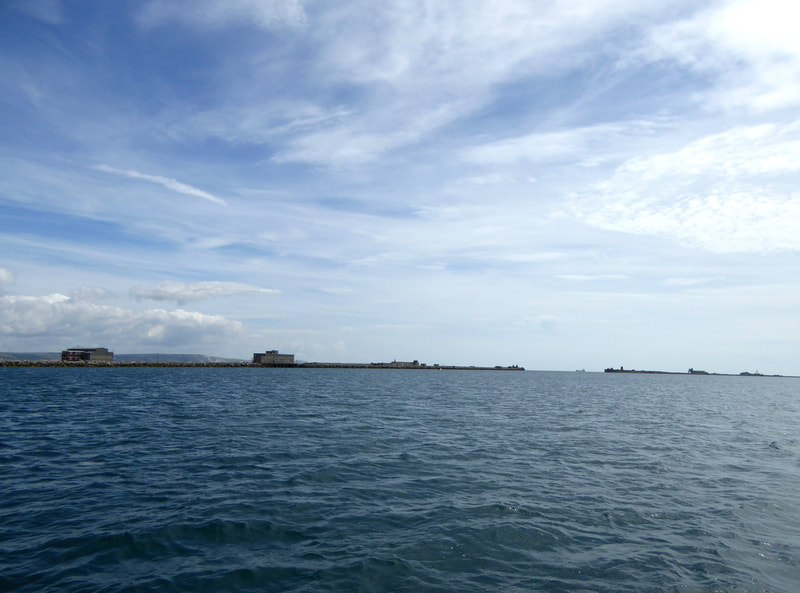 Looking across at B and C Heads from within the harbour. 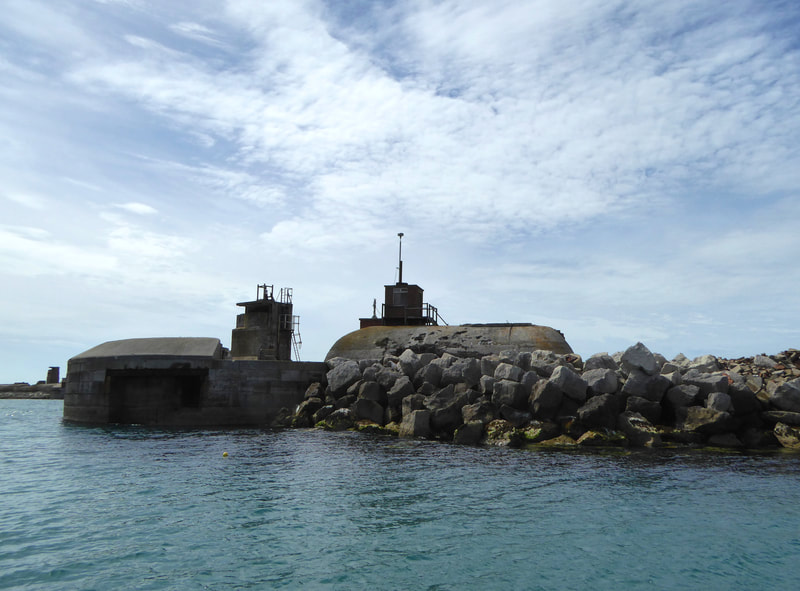 C Head from the seaward side. The central building is the former battery command post for the 6-inch BL gun. 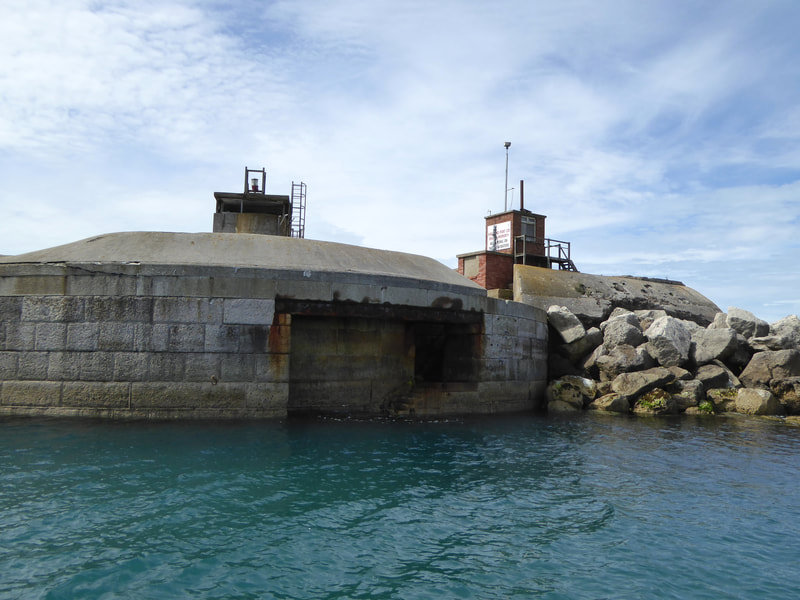 Behind the sloping concrete glacis are the gun emplacements. 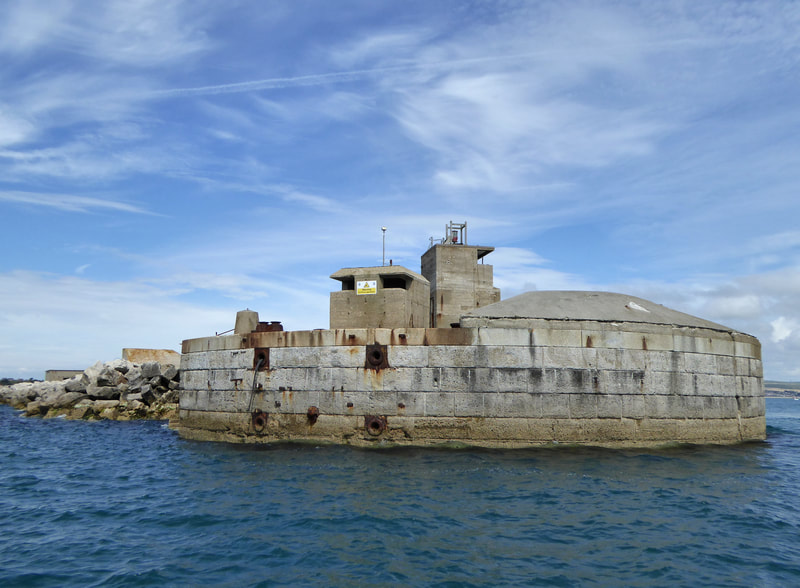 The rusted circular openings seen here held the chains of the boom defence in place at the north ship channel. 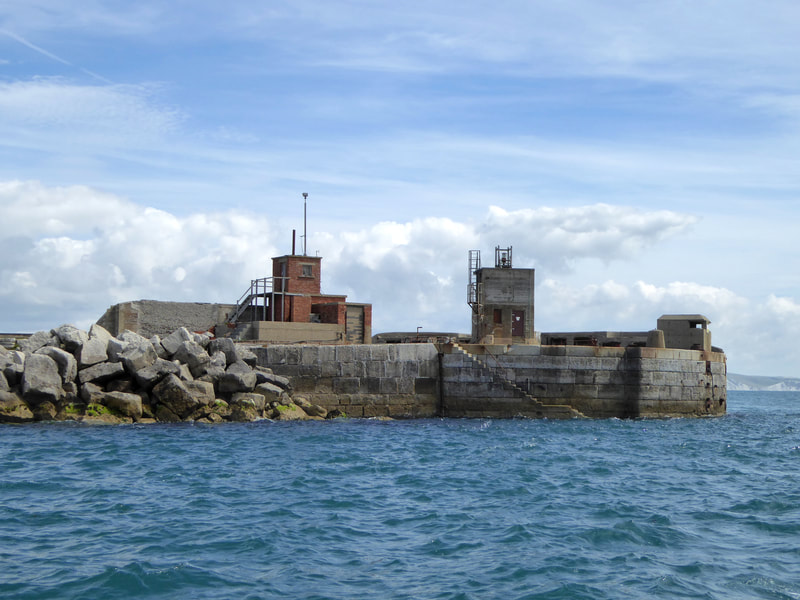 C Head from inside the harbour. The two emplacements, BL on the left and QF on the right, with their shell and cartidge recesses, can just be made out from this height. 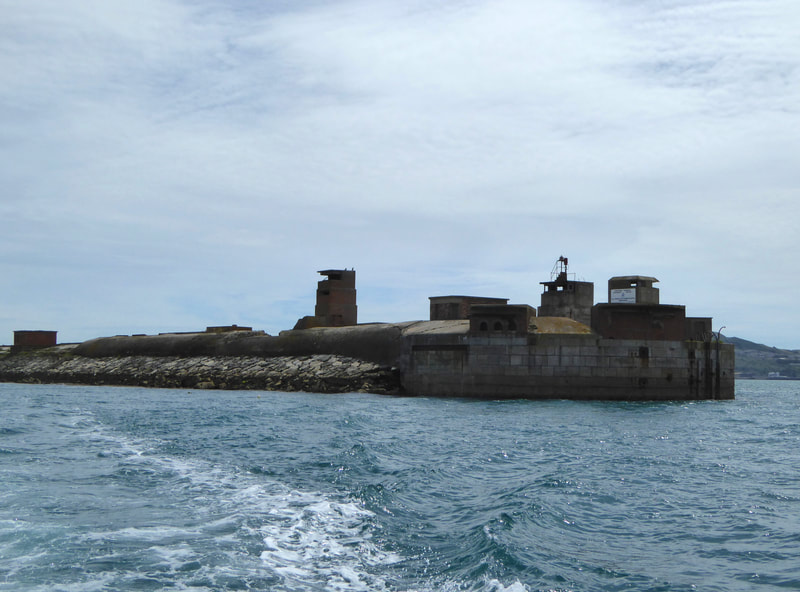 On the opposite side of the north ship channel is B Head, seen here from the seaward side. Again the central battery command post can be seen, but the original emplacements on the pier head have been destroyed or built over. 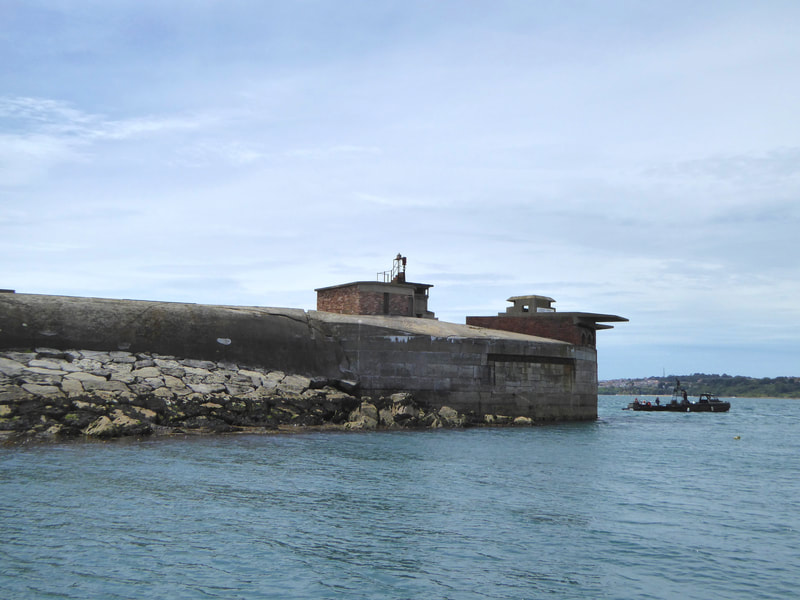 At the centre of this photo is a CASL emplacement dating to World War II. 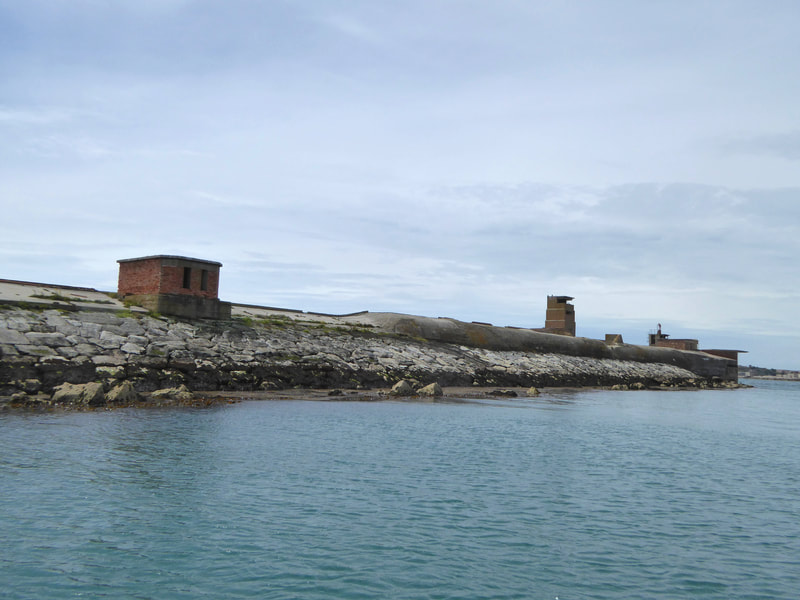 Behind the sloping concrete spanning from the pier head is a series of four QF gun emplacements, built in 1910-11. A second World War II CASL emplacement can be seen on the left. 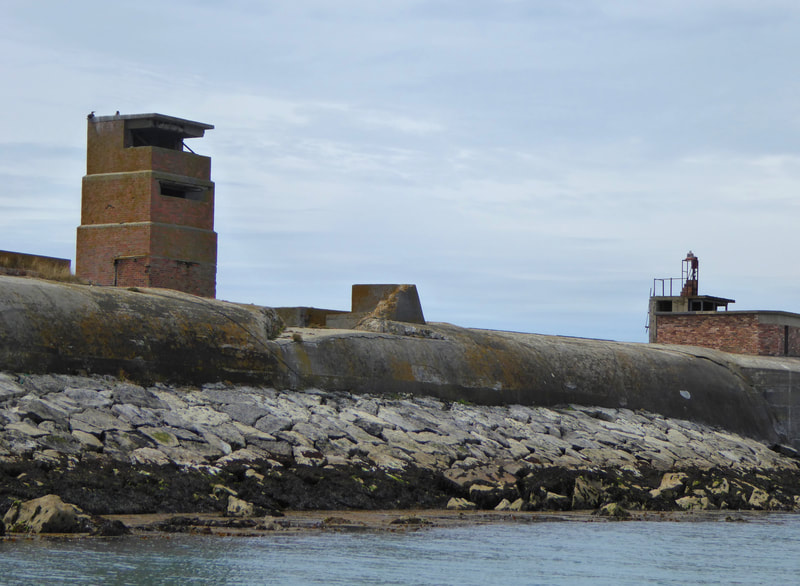 In 1944, a new emplacement was built for a QF twin 6-pounder gun. The associated director sight tower sits behind. 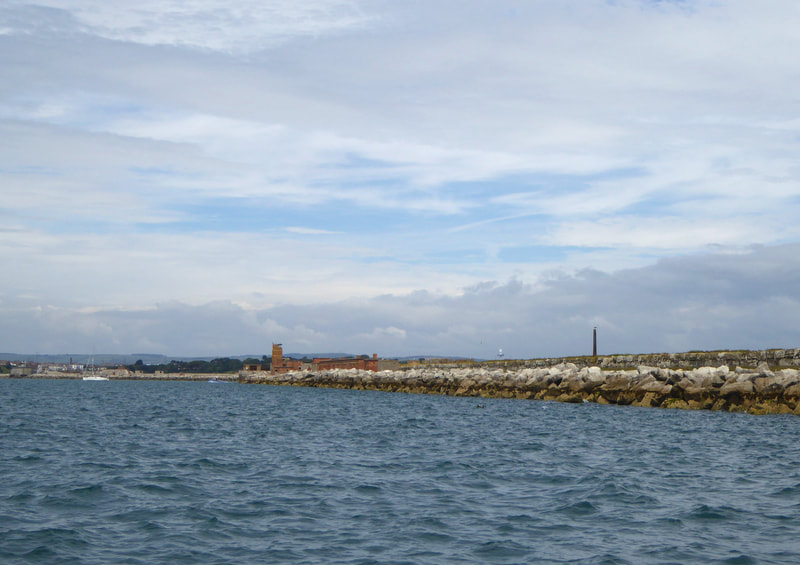 B Head and the adjacent section of breakwater seen from the harbour side. 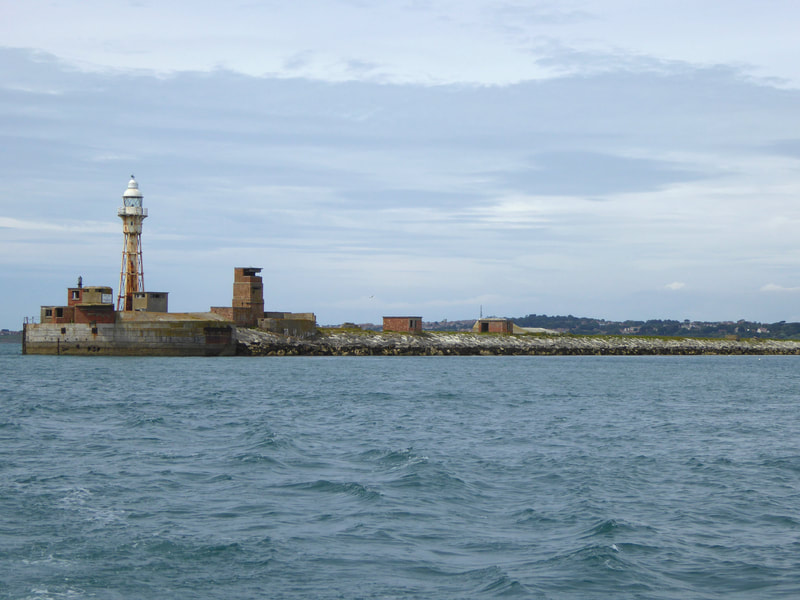 A Head, which is positioned at the east ship channel opposite the Breakwater Fort, is located on the other end of the north-eastern breakwater. It is seen here from the seaward side. Its two original QF gun emplacements are still intact on the other side of the sloping concrete. 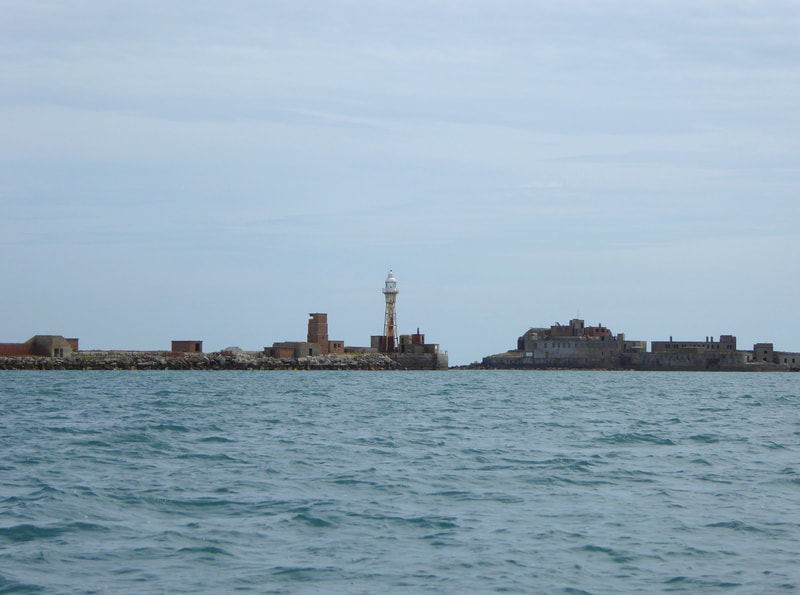 A Head and the Breakwater Fort seen from within the harbour. 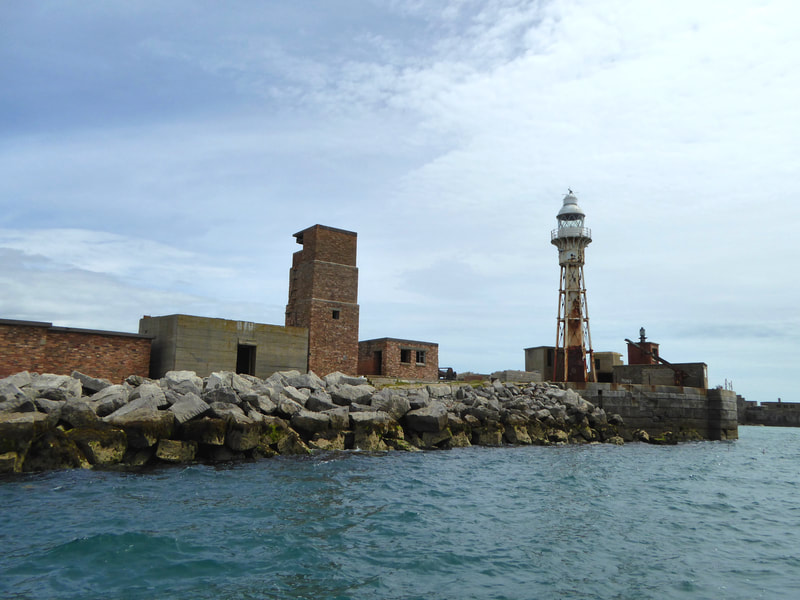 The emplacement and director sight tower for a second QF twin 6-pounder gun was built at A Head in 1944. 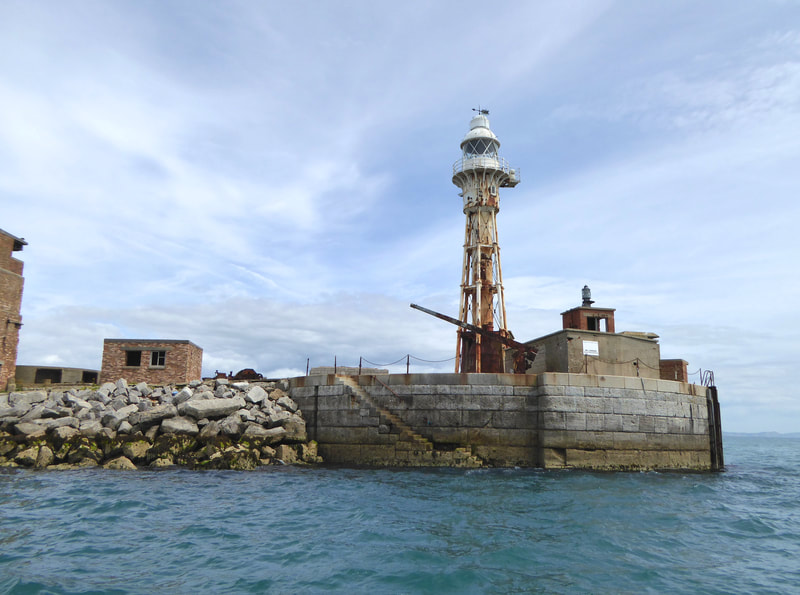 The lighthouse at the centre of A Head was erected in 1905. 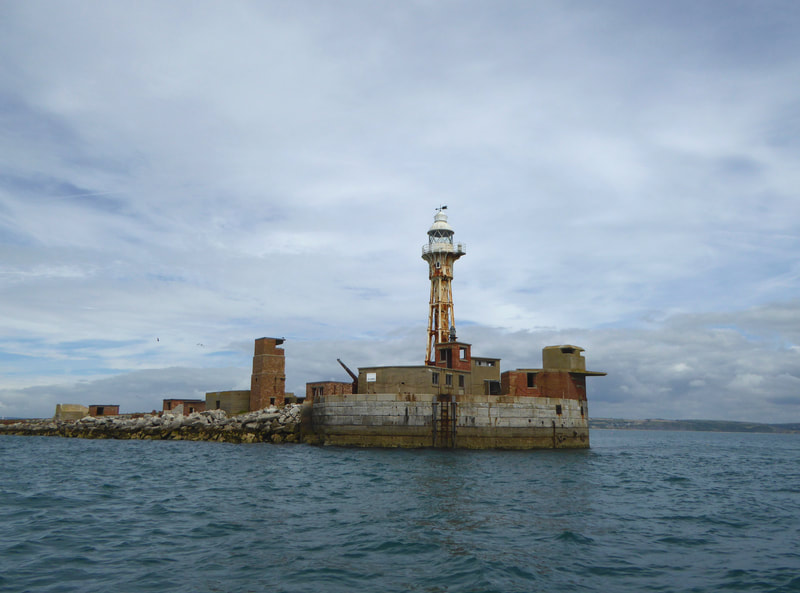