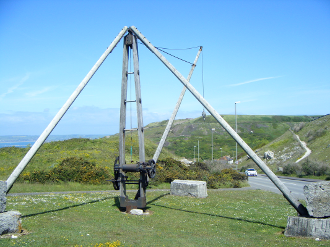 The Priory Corner Quarry Derrick is a restored hand-operated quarry derrick/crane at Priory Corner, alongside New Road, which leads from Underhill to Tophill. It was erected in 1997 as a monument to the island's stone industry.

History
The hairpin bend of the A354 road at Priory Corner, leading up New Road, was originally located closer to the cliff-edge, resting on an old quarry stone tip. Owing to land movement, plans were drawn up by Dorset County Council to realign the road and bring it further inland from the cliffs. The plans were approved in April 1996 and the scheme completed later that year. Shortly after its completion, plans were put forward to erect a restored quarry derrick alongside the road, close to the original starting point of the Merchant's Railway, a horse-drawn and cable-operated railway opened in 1826 to transport stone down from the Tophill quarries to Castletown for shipping.

Trevor Poole, the then-unit manager of the local stone firm ARC Southern, had come up with the original idea for the crane. He worked with other key figures to make the project happen, including Nobby Clarke, Butch Nash and John Sellman. On 4 April 1997, ARC Southern submitted a planning application to Weymouth and Portland Borough Council for the erection of the crane, which was approved on 6 May 1997. The crane was erected soon after, with ARC Southern handling its organisation and installation. The project cost £22,000, half of which had been donated by ARC Southern. Albion Stone made a significant donation, while smaller amounts were received from many others, including a number of non-local stone masons who used Portland stone.

In addition to the crane, a stone block was placed on the site, bearing an inscription, written by local historian Stuart Morris, which reads: "A hand crane stood near this site to load Portland Stone blocks onto the old Merchants Railway. From 1826 to 1939 horse-drawn trucks took the stone from here around Verne Hill down to Castletown Pier for shipping to create some of the world's finest buildings. The road at Priory Corner was diverted away from the unstable cliff in 1996. This hand crane was restored in 1997 and stands as a monument to Portland and its people."

The local organisations and companies who contributed to the restoration and placement of the crane were recorded on a brass plaque, which was placed on the side of the stone inscription. The list includes: Albion Stone Quarries, ARC Southern, Austin & McLean Ltd., Bath & Portland Natural Stone, B.T., Clarks Boatbuilders, Cosens Engineering Ltd., Dorset Engineering Consultancy, Dorset County Council, Portland Plant Hire Ltd., John Sellman - Sculptor, and Weymouth & Portland Borough Council. The plaque concludes with: "And particular thanks to the management and staff of ARC Southern for their efforts in organising, installing and financing the project."

Though considerable numbers of these cranes were once found within Portland's quarries, the crane at Priory Corner remains the only restored example to date. Any derricks that survived into the late 20th or early 21st century became victims of neglect and vandalism, such as the remains of those found at Inmosthay Quarry, Suckthumb Quarry, and near Church Ope Cove.

The restored derrick has since become a popular attraction on the island and is often photographed. In 2000, further down the road, the Spirit of Portland, a stone sculpture by Joanna Szuwalska, was erected and has proved to be another popular attraction within this region of the island. 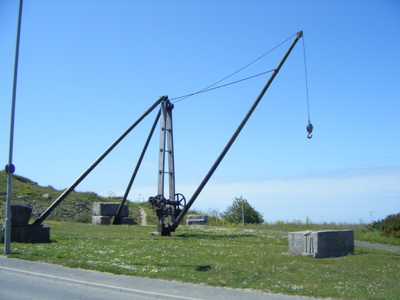 The crane as seen from New Road. 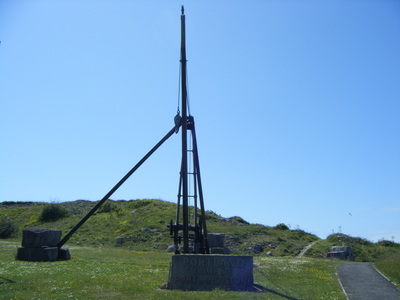 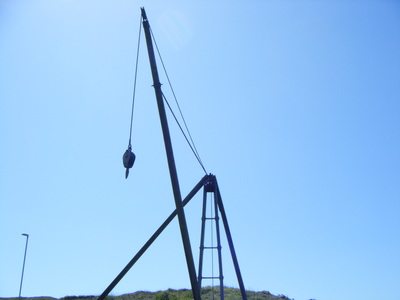 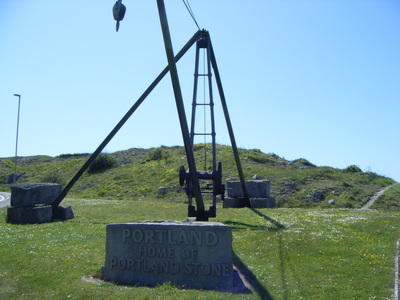 The front of the crane has a welcoming inscription to the island. 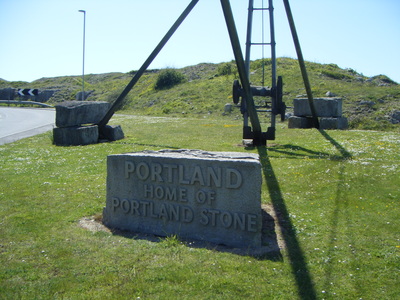 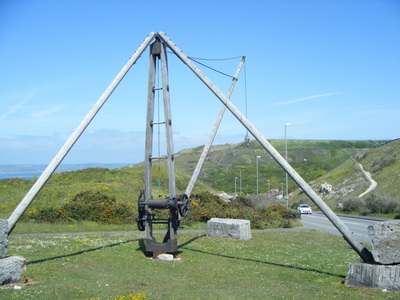 The view of the other side of the crane. 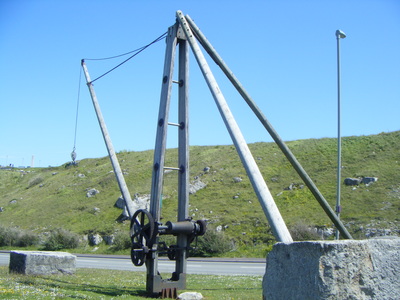 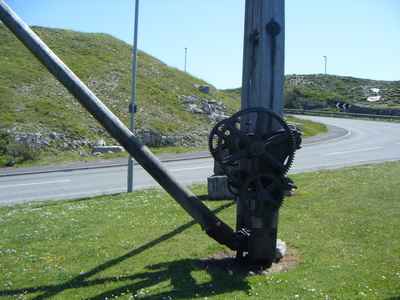 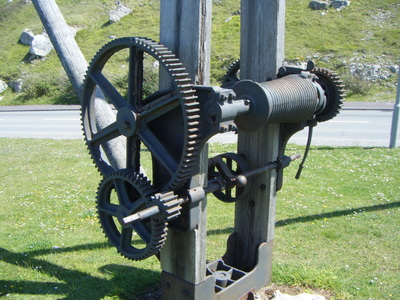 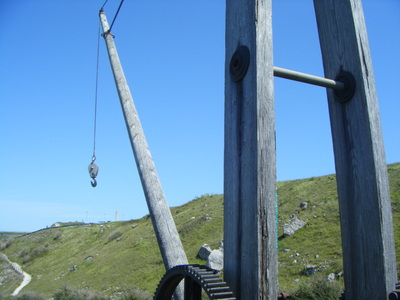 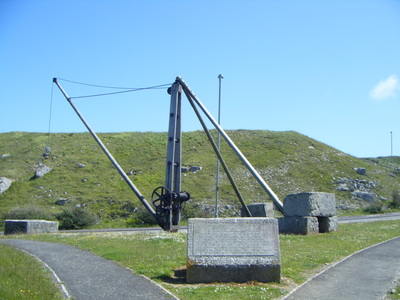 The crane is close to a footpath too, where the old road once ran along before being diverted. 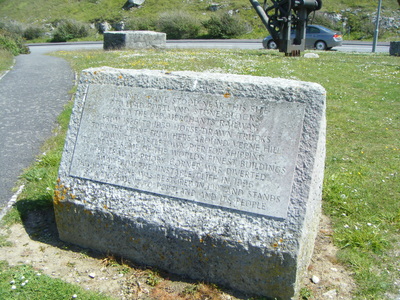 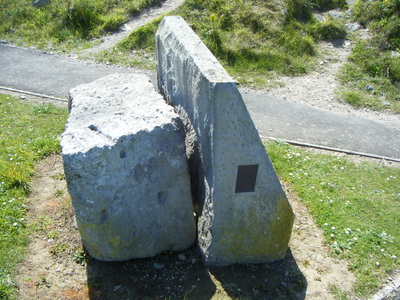 The side of this stone has a small plaque recording those involved in the project. 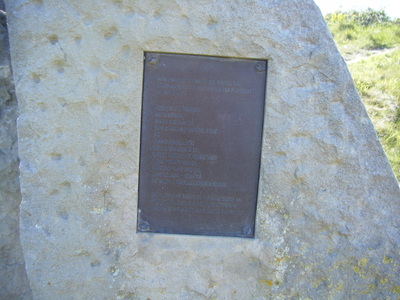 A close look at this plaque. 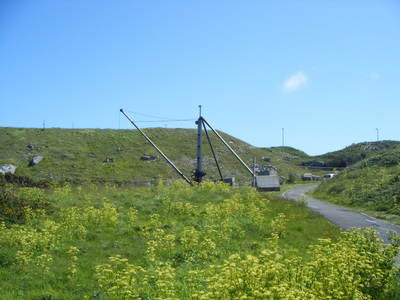 The crane as seen from where the original road bend once ran. 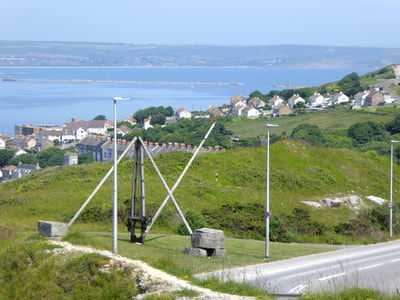 The crane seen from the edge of Tout Quarry. 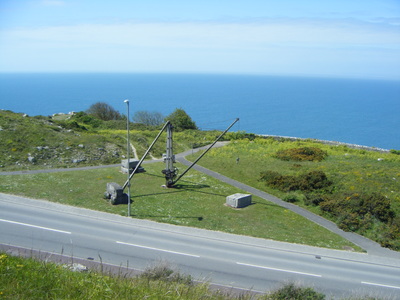 The crane seen from the summit near Portland Heights. 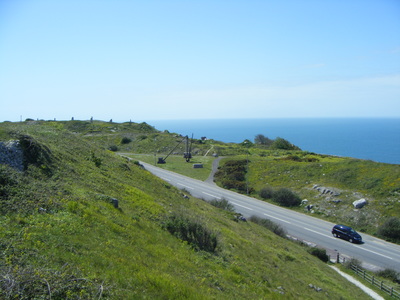