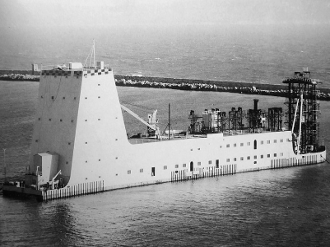 RDV 01 Crystal was a research and acoustic calibration vessel of the Admiralty Underwater Weapons Establishment. It was based in Portland Harbour and designed for use with Sonar research, testing and development projects at the AUWE. The vessel was built by Devonport Dockyard and launched in 1971. It remained at Portland until 1992 when it was sold to a Dutch concern. Crystal had a displacement of 3,040 long tons, a length of 413 feet, 6 inches, a beam of 56 feet, and a draught of 5 feet, 6 inches.

History
Early Sonar-related research at Portland (1917-)
Portland's long association with anti-submarine research, known as ASDIC and later Sonar, began with the formation of HMS Serepta, an anti-submarine school and experimental station, in 1917. It was moved off-shore to HMS Gibraltar in Portland Harbour in 1919. Later in 1924, the A/S operations at Portland were commissioned under HMS Osprey, which saw the establishment of an ASDIC Research and Development Unit (ARDU) in 1927. The research and development work at Portland soon became Britain's primary establishment for ASDIC and would continue at Portland until the end of the 20th century.

After relocating to Scotland during World War II, HMS Osprey returned to Portland in 1946, along with the ARDU, by which time had been renamed HM Anti-Submarine Experimental Establishment (HMA/SEE), and then HM Underwater Detection Establishment (HMUDE) from 1947. Later in 1959, the Admiralty decided that Portland would become the home of all scientific research into weapons, and detection and control systems. The Admiralty Underwater Weapons Establishment was formed, which saw HMUDE becoming known as AUWE(N) and Portland's former Admiralty Gunnery Establishment (AGE) becoming AUWE(S) from 1960.

Despite the various name changes since 1946, the role of HMUDE/AUWE(N) remained the same; it was responsible for the design, development and testing of underwater detection systems, particularly Sonar, while AUWE(S) was concerned with underwater weapons. Various vessels served as trial ships for the establishment over the decades. In 1952, to allow the UDE to conduct trials and research on a "floating laboratory", the Admiralty acquired the Duchess of Argyll and J. Farley. Duchess of Argylll had retired from active service that year and served at Portland under the UDE/AUWE until she was scrapped in 1970. J. Farley, built in 1922 as a Mersey Ferry, served from 1952 until 1974, and was later hulked at Husbands in Marchwood. Broadwey, previously a German icebreaker, joined the group as the third research vessel later in the 1950s.

Construction and use of RDV 01 Crystal (1969-1992)
In the effort to improve existing acoustic calibration trials and Sonar research at Portland, a decision was made seventeen years later to construct a purpose-built floating research facility. The research and development vessel was ordered in December 1969 and construction began at HM Dockyard, Devonport in 1970. As she neared completion, the vessel was named RDV 01 Crystal on 20 March 1971, but her launch was delayed for two days, due to high winds. She was completed during September 1971 for a cost of £4.5 million and commissioned on 30 November. Crystal was towed from Devonport to Portland on 13 December. As an unpowered floating platform, the vessel was not fitted with any propulsion or steering gear, but was anchored within the harbour, close to the outer breakwater, by four anchor chains.

RDV 01 Crystal was used for the testing and of Sonar equipment and components, and acoustic calibration and measurement. Acting as an offshore arm of the AUWE, she was fitted with instruments, cranes, lifting gear and a six-storey laboratory block (including workshops, mess rooms and a sick bay), allowing direct underwater testing of equipment. The lifting gear was split into several stations and could be used for testing a range of equipment, including transducers, hydrophones, sonar domes and sections of submarine pressure hulls (up to a maximum of 125 tonnes in weight). She could accommodate 60 staff, including research personnel.

The unusual and unique appearance of the vessel generated much interest in Crystal and locally she was affectionately known as the Portland Hilton. In his 1999 book Portland Encyclopaedia, Rodney Legg described the ship's design: "She has lines unlike any other ship, resembling a row of terraced houses with a few windows and a flat roof, rising to a tower block at one end. The outer and inner sides are sloping, and underwater she has a flat bottom." The ship was painted grey, with a chequered red and black band at the top of the tower block.

On 15 December 1975, the vessel was towed back to Devonport to undergo a six-month refit programme. This was the first time Crystal had been moved since arriving at Portland and she returned on 28 July 1976. The only other occasion during her operational life at Portland that she was taken away from the harbour was in 1981, where she again underwent refits at Devonport. In 1984, the AUWE became part of the Admiralty Research Agency (ARE) and another change in 1991 saw the establishments, including Crystal, come under the joint service Defence Research Agency (DRA).

Selling of RDV Crystal and closure of Portland's DERA research establishments (1992-95)
With the end of the Cold War and dissolution of the Soviet Union in 1991, a reduction of the UK's defence budget led to the announced closure of HMNB Portland in 1992. Meanwhile, in September 1992, the DRA announced their own rationalisation plans in the effort to save £90 milion per year in operating costs, which included the proposed closure of Portland's "North" and "South" establishments. With the vessel in need of a major refit, RDV 01 Crystal was an early victim of the cuts, with an announcement made in September 1991 that the vessel would be disposed by the DRA and handed back to the Ministry of Defence. That same month saw the MOD confirm the vessel would be sold or scrapped.

The "North" establishment closed in 1995, with the research being relocated to DERA Winfrith. Portland Port Ltd, who took possession of the harbour and former dockyard in 1996, then transformed the harbour into a commercial port. In 2005-06, the abandoned buildings of the former UDE/AUWE(N), to which Crystal was attached, were demolished.

The current status and whereabouts of the vessel is uncertain. In 2006, it was announced that Crystal, described as a "floating outfitting barge", would be moved from Eemshaven to Izmit, Turkey for use in the outfitting of the 900 TEU series of container ship at the yard of Volum Denizcilik.

Two of the photographs displayed below have been kindly supplied by Geoff Kirby for inclusion on this page, and as such the copyright is attached to him. The photograph on his Exploring Portland website can be found here: Portland Port, Royal Naval Cemetery and a Gun Battery 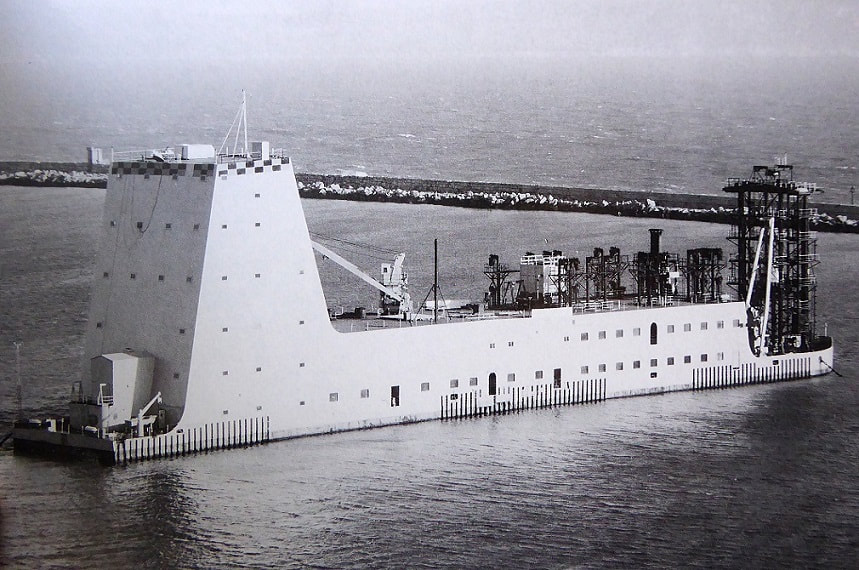 The research and acoustic calibration vessel, RDV 01 Crystal, was berthed in the harbour between 1971-92 as a facility attached to AUWE(N). (© Crown Copyright.) 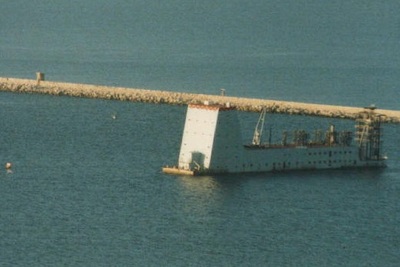 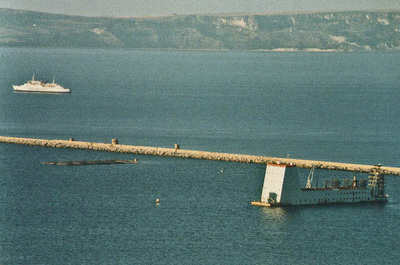