RN Portland Bill W/T Station was a Royal Navy wireless station of early 20th century origin at Branscombe Hill, overlooking Portland Bill. The station was active from 1904 until the end of the 20th century, and the former transmitting station has been used as a budget accommodation facility known as Portland Bunkhouse since 2008.

The origins of Wireless Telegraphy Communications date from the late 1890s. The Royal Navy initially used two types of Wireless equipment - 'Marconi', developed by Guglielmo Marconi, and 'Jackson', developed by Captain H. B. Jackson of the Royal Navy. Portland's station was owned and operated by the Admiralty, and used the Marconi system. It was primarily used to communicate with ships (and later aircraft) operating in the English Channel.

History
Early use of wireless telegraphy at Portland Bill (1900-04)
Portland Bill's association with wireless technology dates to the beginning of the 20th century. In 1898-99, the Admiralty established a coastguard station at Portland Bill, which was selected in 1900 as one of a number of stations for trials testing the effectiveness of wireless communications using Marconi sets. The series of communication tests were held between Portsmouth and Portland, and their success led to the acceptance of the Marconi set. Further trials using tuned spark transmitters were carried out in late 1900 which involved Portland and Portsmouth. The transmitters allowed two stations to be simultaneously operated without undue interference from the other, even if they were located relatively close together.

In August 1900, 32 Marconi sets were ordered and these had been delivered to the Royal Navy by the end of the year. In addition to their installation on various ships, a number of Admiralty stations were provided with wireless telegraphy equipment over the course of 1900-01, including Portland Bill, Dover, Culver Cliff, Rame Head, Scilly Islands, Roche's Point, Gibraltar and Malta.

The station at Portland Bill was primarily responsible for communicating with Royal Navy ships operating in the English Channel. The station was suited for low and high frequency communication, allowing long-range contact under good propagation conditions. Between 1901-04, the station at Portland used an induction coil tuned spark transmitter, a vertical wire aerial supported on a guyed wooden mast, and a coherer receiver replaced by a magnetic detector after 1902.

Establishment and operation of a wireless telegraphy station at Branscombe Hill (1904-1999)
Following its early operational period in the coastguard station, Portland Bill's wireless telegraphy station was moved to purpose-built premises at Branscombe Hill, close to the Old Higher Lighthouse, in April 1904. By 1907 the station's equipment had been improved, replacing the original untuned spark-gap radio systems with tuned apparatus. On 5 March 1907, the station made history when it made direct radio contact with Gibraltar's Admiralty station at Windmill Hill, using a carborundum crystal diode detector. A distance of 1,005 miles, this was likely aided by the use of a new receiver with the fleming diode valve, which had a higher sensitivity than earlier coherer and magnetic detectors. Reporting on the event in the Southern Times, the newspaper commented: "For the past week constant communication by wireless telegraphy has been kept up between Portland Bill and Gibraltar - the greatest distance yet reached from the Bill."

The station was expanded after additional land was leased by the Admiralty from the Commissioners of Woods, Forests and Land Revenues in 1915 and new buildings were erected. The station continued to manage communications with ships over the course of the 20th century. During World War II, it was involved in intercepting messages sent by German motor torpedo and gun boats which were attacking Allied convoys. With the establishment of RNAS Portland (HMS Osprey) in 1959, the station also became involved in aircraft communications and by the 1960s, it was known as "RN Portland Bill W/T Station". During this period, a set of eight high frequency transmitters, possibly of Marconi type, were located on site, as well as a high power transmitter. The station had a permanent watch of three personnel, while technicians would visit the station from HMS Osprey on weekdays. By the 1980s, three lattice masts were located on the cliff-edge, along with a variety of smaller aerials.

In the mid-1980s, the station underwent a £570,000 upgrade, which saw the demolition of the site's existing buildings, the construction of a new transmitter station and installation of new towers and equipment. Work was completed in 1986. HM Naval Base Portland closed in 1996 and the station continued to operate into the late 1990s, until the closure of RNAS Portland in 1999. All transmitting equipment was removed from the site and the transmitting station left vacant. In March 2007, the South Dorset Radio Society celebrated the 100th anniversary of Marconi's first contact by radio to Gibraltar through setting up the channel GB1HPB and once again making contact with Gibraltar.

Creation and use of the Portland Bunkhouse (2008-)
In 2008, the former transmitter station was acquired by the local dive operator Fathom and Blues and planning permission to transform it into an office, storage and overnight accommodation facility for divers was approved in July 2008. Having been left derelict since it was vacated by the Ministry of Defence, the building was in need of external repair, while the surrounding grass area had become considerably overgrown.

As part of the building's redevelopment as the Portland Bunkhouse, the original kitchen was transformed into additional shower and toilet facilities, the boiler room as storage, and the main room partitioned into bunk style accommodation. Two other rooms were transformed into a kitchenette and seating area, and another used as a classroom for the diving and powerboat courses. The original office room was retained for use as an administrative centre.

In addition to its use for accommodation, storage and administrative purposes, the building was also used for land-based diving and powerboat courses. The budget accommodation was aimed specifically at divers on these courses, but also other visitors to the island, from pleasure divers, bird watchers, walkers and climbers to sailors and windsurfers. In 2012, new owners took over the Portland Bunkhouse and improvement work was carried out in 2013, with the building receiving a new set of showers, new ceilings in the main hall and a car park extension. 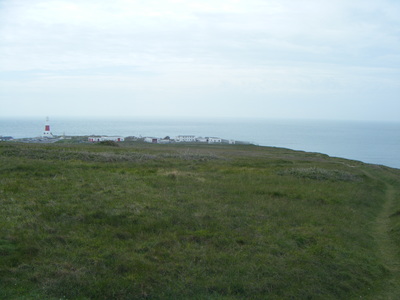 Looking to the tip of Portland Bill from Branscombe Hill - the aerial towers of the station were once situated around this area. 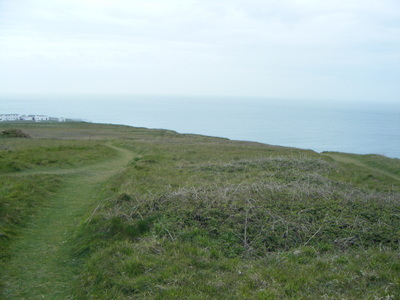 The surrounding land has been left to nature, and as such there is little evidence of the site's past. 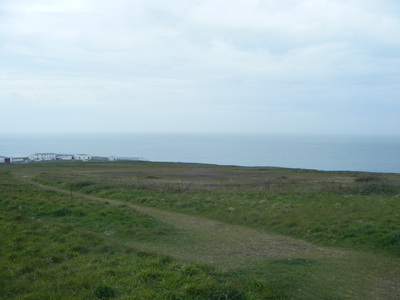 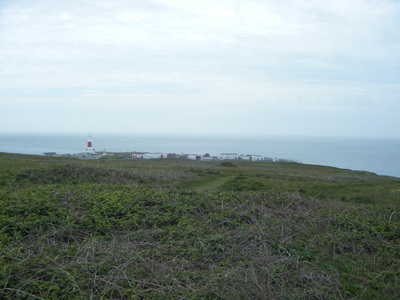 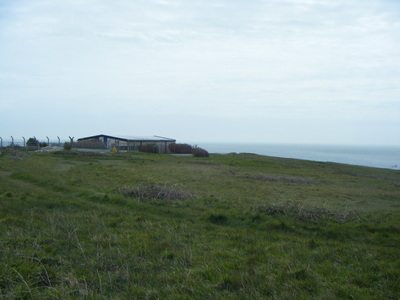 The former Transmitting Station is situated a little further down from the NCI Station. 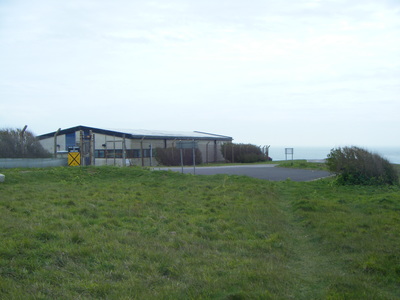 The site's car park can be seen opposite the building. 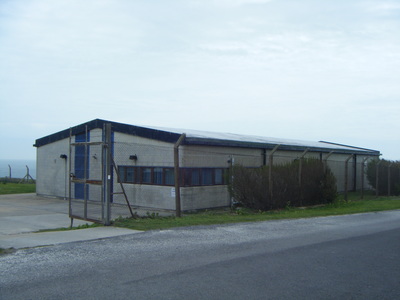 The building was designed in typical MOD style. 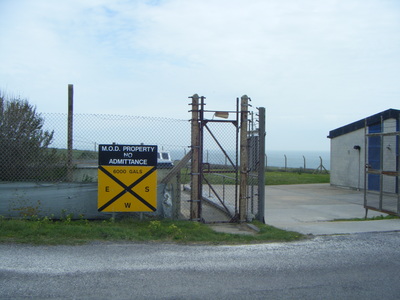 An original MOD Property sign remains outside the main gate. 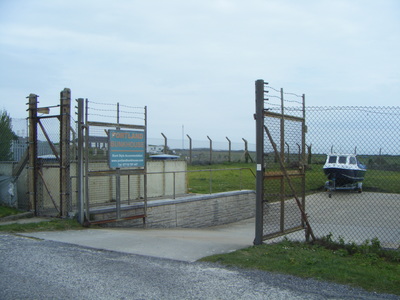 The building is now the Portland Bunkhouse. 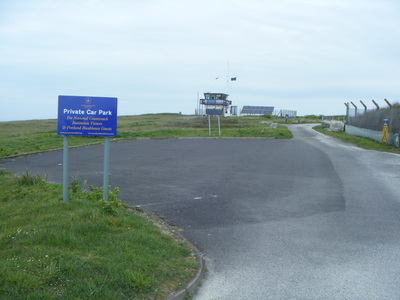 The car park is now shared between the Portland Bunkhouse and the NCI Station. 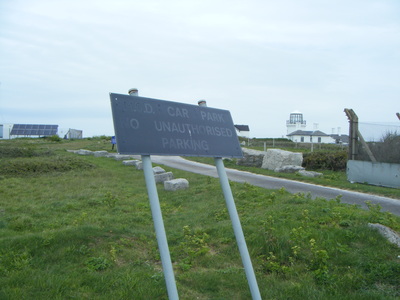 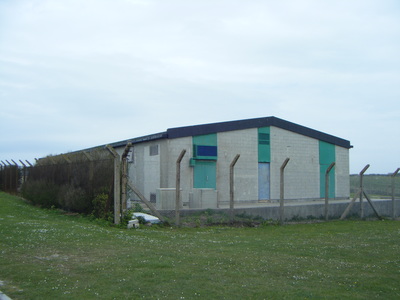 A side view of the former transmitter station. 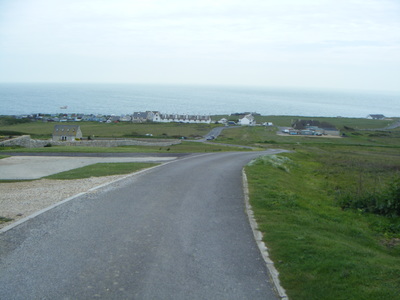 The private road, Higher Light Lane, leads up to the site from the main Portland Bill Road. 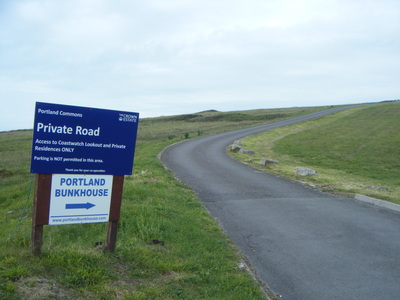 The Portland Bunkhouse sign at the bottom of the lane. 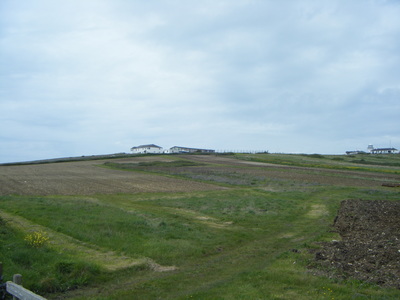 The transmitter station as seen from Portland Bill Road, with Lloyds Cottage alongside it.