ROC Post Portland Bill was a Royal Observer Corps Monitoring Post in use from 1960 until 1991. Although named after Portland's southerly promontory Portland Bill, the post was actually further north, close to West Cliff and Weston. It was located within the south-west corner of a playground at the end of Grangecroft Road, and was transformed into a storm drain for a new housing site in 2007.

History
From 1925-55, the Royal Observer Corps' main role was in aircraft recognition and reporting. During World War II, the local ROC volunteers of Portland used lookout posts at Grove Point and New Ground for this purpose, with the latter being replaced around 1942 by a satellite post, known as ROC Stope Tower, which was located in the tower of the ﻿Old Higher Lighthouse﻿ at Portland Bill. After a brief stand down of the ROC in 1945, the beginning of the Cold War saw the organisation given the new task, in 1955, of the detection and reporting of nuclear explosions and associated fall-out in the event of a nuclear attack on Britain. This nuclear reporting role continued to be operated by ROC volunteers until the end of the Cold War in 1991.

The ROC post at Portland was one of over 1,500 underground structures built across the United Kingdom to facilitate the Corps' new role. The posts were designed to house three ROC volunteers, whose job it would be to use supplied equipment to gauge the bomb power and ground zero of a nuclear blast. This information would be sent back to a designated local headquarters, from where it would be used by the government and other local authorities to help inform and protect surviving civilians after nuclear attack. While such an attack never occurred, the volunteers of all posts across the UK would take part in regular training and practice routines.

Like most across the UK, Portland's ROC post was built to a standard design consisting of a 14 feet deep access shaft, a toilet/store and a monitoring room. The post opened on 1 August 1960, with the designated headquarters being Yeovil's 9 Group ROC Headquarters. Later in 1968, a third of ROC posts across the UK were closed following a reorganisation and major contraction of the ROC, although Portland's post remained operational.

All ROC posts across the country were grouped in clusters of 3-4, with a master post in each cluster. After the 1968 post closures, Portland was grouped with three other posts: Burton Bradstock, Dorchester and Buckland Newton. Portland was designated with the unique reference number 57. The master post was Buckland Newton, which had the addition of a VHF radio as well as a landline-based loud speaker telephone, which ensured that communication was possible from all sector posts to the group HQ. Additionally, Buckland Newton was selected as one of eighty-seven master posts to be designated as ROCMET posts, enabling it to gather detailed information on local weather.

The end of the Cold War saw Portland's ROC post closed on 1 September 1991. Although the Ministry of Defence remained the owners of the post, it was left largely abandoned thereafter. Nick Catford of the Subterranea Britannica visited the Portland ROC post in July 1997 as part of a nationwide survey of surviving posts. He would later visit again in September 2004. His report on the Subterranea Britannica website revealed that all surface features of the post remained intact, although depression of the site was evident. By 2003, this depression had been leveled with the surrounding land, while the top of the access shaft had been reconstructed with a new Torlift hatch installed. By 2002, the post's compound fencing had been removed.

During the 1997 inspection the hatch had been welded shut, but by the 2004 visit the welds had been ground off, allowing it to be unlocked with a Torlift key. Inside the post, Catford reported that the monitoring room contained a number of surviving features, including a table, shelf, cupboard, BPI mount, FSM pipe blanking plate, BT junction boxes and wiring, a cluster map and two posters. Additionally there was a shelf by the door and a small rack of shelves on the wall above the cupboard. Within the toilet/store room two shelves remained.

Transformation of ROC post into storm drain
Around 1997-98, Millennium Communications erected an telecommunications mast close to the post. In 1999, after the land had been acquired from the Ministry of Defence, a planning application was submitted by Annington Property Ltd to transform the former playground, including the post, into a residential development of 12 units, along with an associated roadway and parking spaces. It was approved in 2001, but no work was undertaken. Weymouth and Portland Housing submitted an entirely new, unrelated application for the site in 2002, which consisted of the replacement of the existing playground equipment and addition of new equipment. However, this was withdrawn and the same applicant resubmitted the original 12 unit development plan in 2004, which was again approved. The landowner had spent £800 hiring a confined space entry team to investigate what the post was.

A new application from Weymouth And Portland Housing was approved in 2006 to build a £4 million development of 33 flats on the site. In the site investigation report by Roger Locke Consulting, it was noted: "The underground defence structure will be under a car park. Access for inspection was not possible but it is likely to be of quite massive construction and unlikely to collapse in the medium term. Health and Safety issues are likely to dictate that the building is filled. This can be most efficiently and economically achieved by using cement slurry. The access and ventilation shafts should be broken down to a level where they will not interfere with the car park construction."

However, in July 2007, it was reported in the Bournemouth Echo that the post was going to be used as a storm drain for the new housing development. The post soon had its external features, including the air vents and entrance, cut down. The post was then cleared up and leveled for drainage work. By 2008, any external signs of the post had been demolished, leaving only disturbed ground to mark where the post once was. Though Dorchester and Buckland Newton's posts remain intact to date, the Burton Bradstock post is the other of the group's four posts to have been demolished since its 1991 closure.

Photographs of the post both exterior and interior can be seen on Nick Catford's Subterranea Britannica page, and this also includes a photograph from Alan Bradshaw of the post in 1986. The link is here: Subbrit Portland Bill ROC Post. 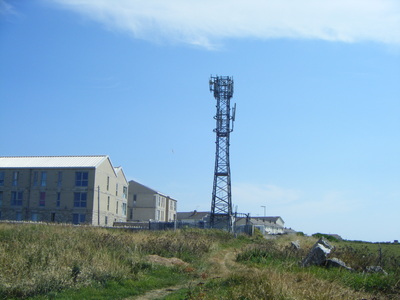 The post would have been located on the left of this tower. 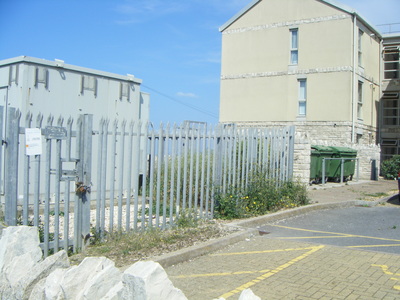 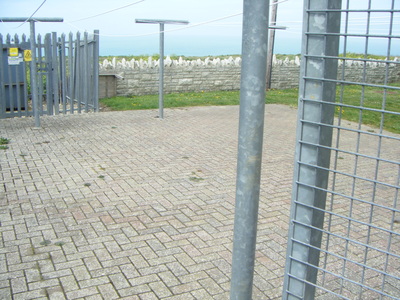 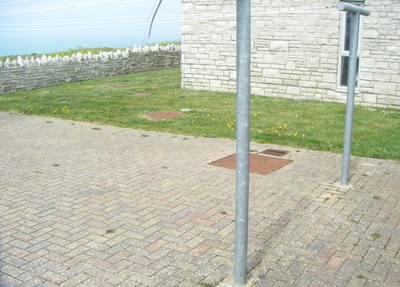 The drain hatches may be an indicator of where the post is now in use as an overflow water storage tank. 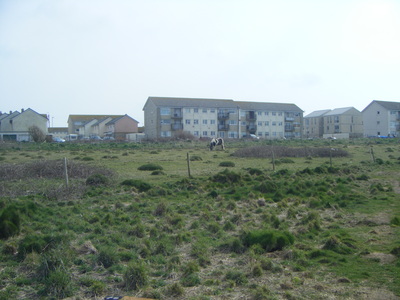 The post was located close to the Weston Estate. 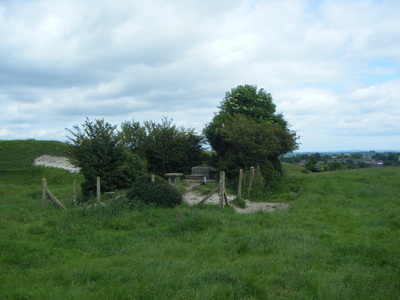 Approximately 15 miles away at Poundbury Rings in Dorchester is a surviving ROC Post, once part of the same cluster as Portland's example. 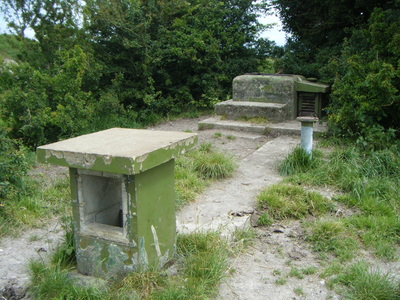 Like the majority of posts across the UK, Portland's one would have been largely similar to this. Seen here is an air vent, the fixed survey meter pipe, and behind is the hatch. 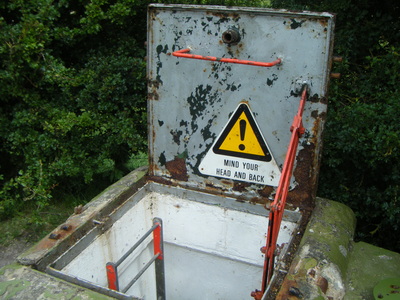 The opened hatch, the only way in and out of the post. 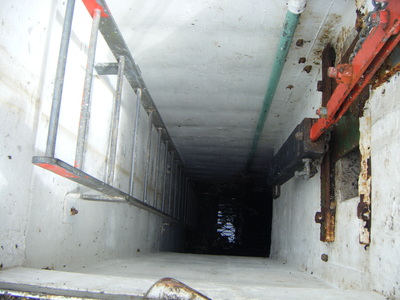 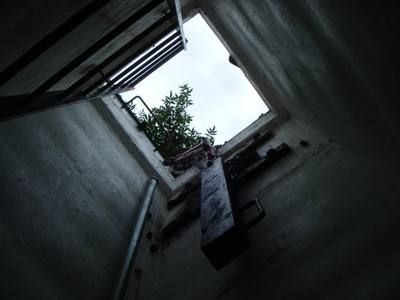 Looking back out of the hatch. 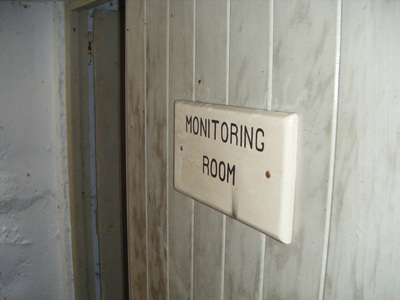 Upon descending there are two rooms, one of which is the main monitoring room. 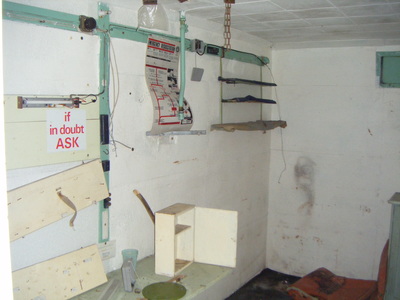 All operations were carried out in this room. 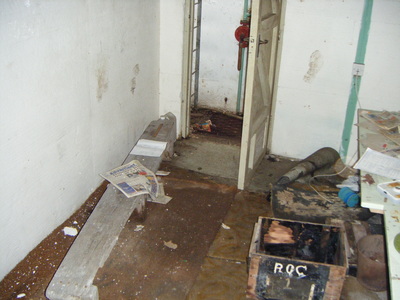 Looking back across the room towards the shaft. 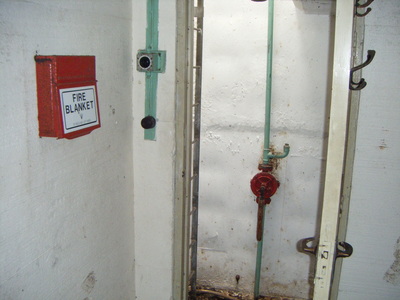 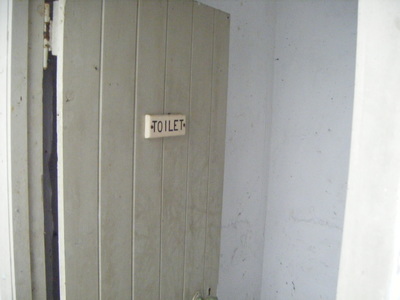 The other room is the small toilet room, otherwise used as a store room. 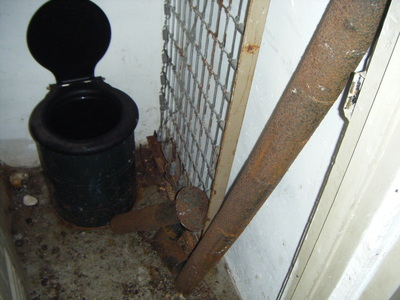 In Dorchester's post, this unused chemical toilet is still in place. 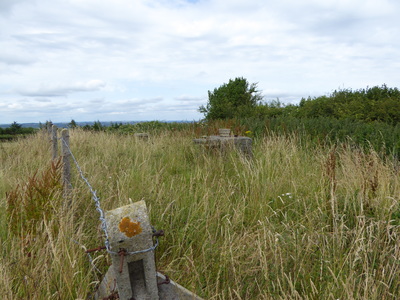 And almost 30 miles away, at Buckland Newton, is the master post for the cluster, still remaining intact today. 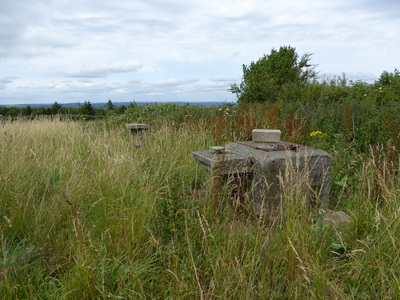 Again the main access hatch and nearby air vent can be seen in the tall grass. 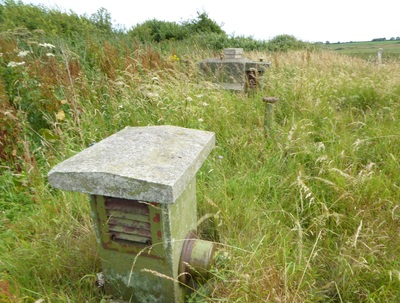 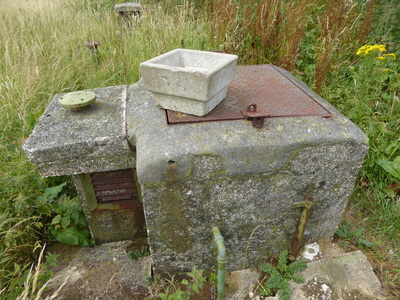 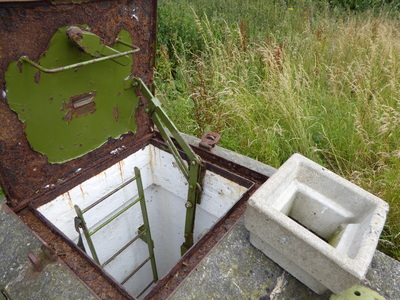 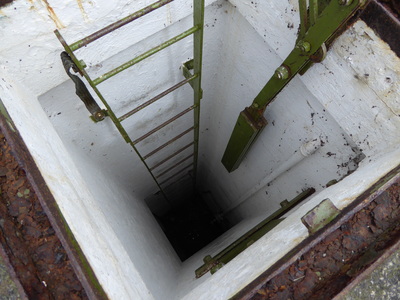 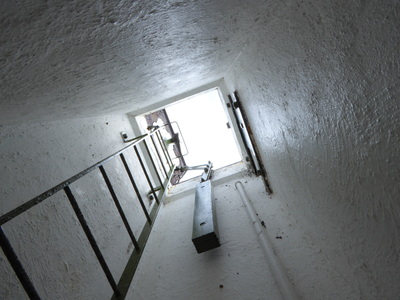 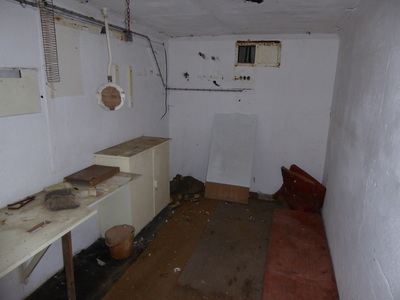 The monitoring room as it remains today. 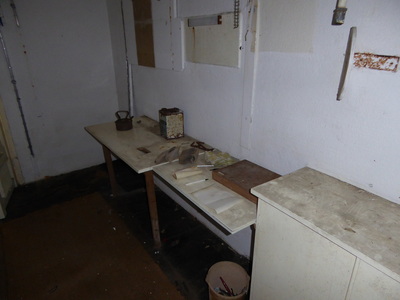 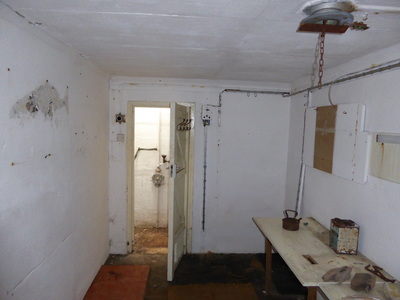 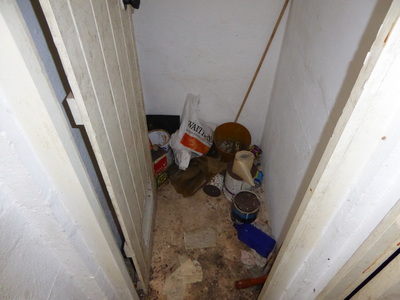