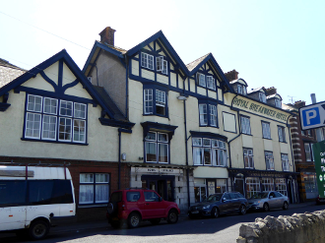 The Royal Breakwater Hotel is a hotel and public house of mid-19th century origin at Castletown. Opened in 1852, the hotel was one of a number of commercial enterprises primarily built to serve merchants and Royal Navy personnel using the newly-established Portland Harbour. It was rebuilt in the early 1900s and continues to operate as a two-star hotel. The building has been Grade II listed since May 1993.

History
Establishment of the hotel and early use
In 1847, the Portland Breakwater Act was approved for the transformation of the natural anchorage known as Portland Roads into a harbour of refuge, primarily for use of the Royal Navy. The scheme involved the creation of two breakwater arms, built between 1849-72, while other related works included the construction of various fortifications to defend the new harbour. As work on the breakwaters commenced, the small settlement known as Castletown was quickly transformed into a commercial hub, serving the Royal Navy and their personnel, along with merchants using the harbour. A one-sided terrace was established on Crown-owned land along Castletown, which included various businesses, hotels and pubs, such as the Green Shutters, Sailors' Return, Portland Roads Inn and Royal Breakwater Hotel.

The Royal Breakwater Hotel was built for the local victualler and innkeeper Thomas Sansom, who had the new hotel constructed before signing a 50-year lease with the Commissioners of Woods, Forests and Land Revenues. Sansom had previously been the proprietor of the Castle Hotel, which stood opposite his new hotel, overlooking Castletown Pier. The Royal Breakwater Hotel opened in April 1852 and was described by a contemporary advert as being "fitted up in every convenience". In addition to its accommodation and bar, horse-drawn carriages with "careful drivers" were available to hire. A month after opening, the hotel was one of a number of local establishments used for a large celebration of Mr. John Leather's marriage, the main contractor of the breakwater works.

By the 1860s, the hotel had become popular with sailors, merchants and general visitors to Portland. An 1856 Illustrated Weymouth Guide described the hotel as having "very superior accommodation", while the Sherborne Mercury described it in 1865 as the "prime resort of all visitors to the island". In July that year, the hotel supplied a carriage to the Prince and Princess of Wales (later King Edward VII and Queen Alexandra) during their visit to Portland to inspect the progress of the new harbour, along with the Verne Citadel. Later in October that year, Prince Albert, the second son of Queen Victoria, stayed at the hotel overnight when, owing to bad weather, his vessel, HMS Racoon, sought shelter in Portland Harbour.

From the time of its establishment and into the early 20th century, the hotel was regularly used to hold inquests, primarily for sailors who met fatal accidents within the harbour. One of the earliest was that of Thomas Flisher, a workman employed on the breakwaters, who was accidentally killed in 1859 when a gun on-board HMS Blenheim missed its practice target and struck Flisher as he was returning from Weymouth to Portland on-board a galley with the harbour's engineer-in-chief John Coode. An inquest in 1914 was held for a Japanese sailor, Kokichi Tsubone, after the steamer he was serving on sought refuge at Portland following an explosion in the cargo hold, which caused injury to five other sailors. Tsubone's funeral was held on Portland and he was buried in Stranger's Cemetery, after the Buddhist rites were performed at the hotel.

In 1918, the inquests of two lance-corporals of the Dorset Regiment was held at the hotel. Both men had been walking along the railway line to Portland one December night when they were struck by a train carrying American sailors to the island. Meanwhile, the hotel was also infrequently used as a place of auction. In 1894, the remaining wreck of the Norwegian barque Ran, wrecked on Portland's coast, was auctioned at the hotel, along with its salvaged cargo, by the Admiralty auctioneers Messrs W. Roberts and Company.

Rebuilding of hotel and 20th century use
Following the death of Sansom's son in 1889, the existing lease for the Royal Breakwater Hotel was taken over by the Dorset-based brewery Hall and Woodhouse Limited. By 1899, they had decided to rebuild and make major alterations to the existing hotel, with the plans being drawn up that year. The Portland Urban District Council recommended the rejection of the plans in December 1899 over a bylaw concerning open space attached to new properties. However, plans later submitted in 1901 were met with no objection during a County Petty Session at Dorchester, while that December saw an Article of Agreement for the scheme signed with the Commissioners of Woods, Forests and Land Revenues. The work was carried out in 1902-03, with an agreed expenditure of at least £3,000, while Hall and Woodhouse Limited also secured a new 76-year lease in 1905, which was backdated to 1903. The brewery remained the tenants of the hotel until 1950, with the Crown selling the hotel as a freehold later on in the century.

The Breakwater Hotel was a popular drinking establishment and place of accommodation, particularly for naval personnel, throughout the 20th century. Before the construction of the Hardy Site at Castletown during the 1980s, there was limited on-site accommodation available to personnel at HM Naval Base Portland, resulting in many hotels and guest houses across Weymouth and Portland to be in constant demand. With the closure of the base in 1995, Castletown, including the hotel, faced some economic uncertainty due to the area's heavy reliance on the custom that had been generated by the navy's presence. The hotel, which received new ownership in 1996, began focusing on attracting the custom of tourists and visitors using the area for recreational activities, namely diving, along with visitors to the newly-established Portland Port.

In 2010, planning permission was obtained to demolish the hotel's former stable and coach house, and replace it with a new dwelling. After it had finished serving its original function, the outbuilding saw various uses including as a private garage, workshop and storeroom. It gradually fell into dereliction into the late 20th century and was considered too costly to repair after a 2010 survey found major restoration would be required. Following the approval of the planning application, the outbuilding was demolished and the land sold to a new owner in 2013, separate from the hotel. That year saw minor amendments to the original application approved and work then commenced on constructing the new dwelling. The Breakwater Hotel was sold to new owners in 2017 and continues to operate as a two-star hotel.

Design
The hotel is built of brick and Portland stone, some of which is rendered, mainly on the facade. Discounting outbuildings, the hotel is made up of three sections. At the eastern end is the two-storey service wing, joined to the west by a twin-gabled, four-storey centre section, which features the main entrance to the hotel. The western end features a three-storey and three-bay (plus attic) section, which displays "Royal Breakwater Hotel" in bold sans serif above the second bay. To the rear of the hotel is a number of outbuildings, which included the former two-storey coach house/stables.

In a 1993 survey, English Heritage described the building as being "complex", with a "rich composition characteristic of turn of century design". The Appraisal of the Conservation Areas of Portland considers the hotel a landmark building within Castletown's conservation area and described it as "exuberant".

This image can be enlarged by clicking on it. 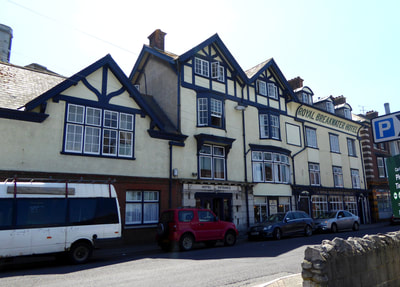 The Royal Breakwater Hotel along the terrace at Castletown.