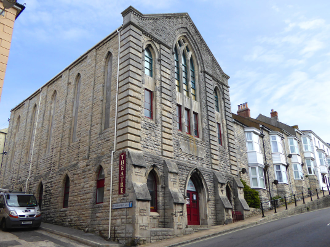 The Royal Manor Theatre is an active theatre in Fortuneswell, opened in 1978 and operated by the Royal Manor Theatre Company, who have charitable status. Their aim is to provide "live theatrical entertainment of a high standard for the local community within easy reach of their homes" and "provide and improve education in all aspects of drama".

The theatre is housed in a former Primitive Methodist chapel built in 1869, which in recent years, has been designated an Important Local Building.

History
Construction of and use as a Primitive Methodist Chapel (1869-1971)
Portland's Primitive Methodist society was established in 1838 through the efforts of Thomas Russell, an early missionary of the Primitive Methodist movement in England and Ireland. Russell based his Portland mission in Chiswell and successfully formed a small society as part of the Weymouth Circuit by conducting open air services and holding meetings in numerous properties. The society quickly established a place of worship in a converted store house at Chiswell, known as Ranter's Lodge, and later erected a chapel in the village in 1858.

The Chiswell chapel quickly became inadequate to serve Portland's growing society and plans were made for the construction of a new, larger chapel in Fortuneswell. Designed by Mr. James Kerridge of Wisbeach and constructed by Mr. John Patten of Portland, the foundation stones of the new chapel were laid in January 1869 and the building opened in August of that year. It cost £1,460 to build, with the society recorded as still owing £551 of that sum in early 1878.

In 1887, Portland's society split from Weymouth to form its own circuit. A new vestry was opened at the chapel on 27 March 1891, followed by a new organ and organ loft in 1896. The organ, which had been built for Stanton Court in Weymouth at a cost of over £400, was purchased by the Primitive Methodists by auction for £175, and opened at the chapel on 10 June 1896. During World War I, the chapel's schoolroom was used as a social centre and canteen for soldiers and sailors at Portland. The chapel remained under the Primitive Methodists until 1932, when they merged with the United and Wesleyan Methodists to form the "Methodist Church". The chapel then formed part of the Portland Methodist Circuit from 1933.

The church suffered bomb damage in an air raid of 11 August 1940, which resulted in the closure of the sanctuary for the remainder of the war. Although the church's Sunday School was in use at the time, no injuries or fatalities occurred. The chapel's services were subsequently held in the school hall until the sanctuary was repaired and reopened after the war. The church remained active as part of the Portland Methodist Circuit until 1971 when it was closed and put up for sale. The congregation was merged with Underhill Methodist Church at the top of the village.

Establishment and early years of the Portland Dramatic Society (1947-71)
The Portland Dramatic Society was formed in 1947 as an attempt to return theatre to Portland following World War II. In its early period, the society used numerous venues on the island and in Weymouth to perform short sketches and plays. As the society's numbers increased, their first three-act play, "Mystery at Greenfingers" by J. B. Priestly, was performed in 1949 at the Masonic Hall in Victoria Square. The society continued to perform three-act plays and short performances into the 1950s.

In early 1957, the society secured an annual lease at Portland's Masonic Hall for their productions. Sixteen plays at performed at the hall until early 1964, when the society could no longer be accommodated at the hall as the owners wished to obtain full use of the building again. The society secured an agreement over the use of the Jubilee Hall at Easton in 1965, where they performed thirteen plays until 1970, when they were forced to vacate again as the owners made alternative plans for the hall.

While the society attempted to find a new home, they continued to perform short plays at various venues and also participated in three festivals at Weymouth Pavilion. However, by late 1971, the lack of a permanent venue caused members to fear the society would soon be disbanded.

Creation of the Royal Manor Theatre (1971-78)
The society's fortunes were revived in 1971 when the former Methodist chapel was put up for sale. Having been made aware of the society's lack of a home, Captain Chibnall and his wife, who were interested in buying the chapel, contacted the society with the offer of a potential lease for part of the building. A meeting soon followed and a lease was agreed for the upper floor of the chapel for £25 a year.

Conversion work of the floor into a theatre began in the late summer of 1972. The interior was stripped of all its Victorian furnishings, with the pulpit, pews and choir stalls being sold. Planning permission was approved by the Portland Urban District Council, who provided support and guidance over the course of the conversion work. A regular working party of approximately eight people provided voluntary labour. The construction team, led by a retired master carpenter, included engineering craftsmen and electrical and mechanical engineers.

The stage and proscenium were built first, while the gallery was divided to accommodate a workshop, store and wardrobe on one level, and a lighting control room on the lower level. To transform the space into a more intimate setting, and to conserve heat, a false ceiling was built over the auditorium. During the late stages of construction, new fire regulations required the society to erect some fire check walls, which caused a delay of completion for several months. The final work to be carried out was the installation of seating and decorations.

Overall, the project involved an approximate 11,000 hours of voluntary labour and had cost £3,500. To keep costs to a minimum, the project used locally obtained second-hand timber and donated auditorium seating. At the beginning of the project, a fund-raising committee was formed, which, along with donations, covered the project's costs through the holding of many fetes, jumble sales, coffee mornings and other events.

Opening of the theatre and establishment of the Royal Manor Theatre Company (1978-)
The theatre's official opening in October 1978 also saw the society's name changed to the Royal Manor Theatre Company. The first play performed at the new theatre was "Wedding of the Year", which ran for three nights. However, in 1980, Captain Chibnall announced his decision to sell the former chapel. The company decided to attempt a purchase of the building themselves and they soon approached the Weymouth and Portland Borough Council for support in obtaining a bank loan.

The council made the proposal of purchasing the building themselves and then leasing it to the company at an annual rate. Chibnall agreed to sell for the original purchase price, plus the cost of improvements he had made, which totalled £8,500. The building came under the council's ownership in May 1980, with the authority giving the company the option of purchasing the building from them at the same figure within five years. The company launched a building appeal fund, while one company member offered a £5,000 interest-free loan repayable over ten years. By 1982, the company had raised enough capital to purchase the property and the £5,000 loan would be fully repaid by 1985.

Since the 1980s, the company has continued to make numerous improvements to the theatre, including the renewal of the front windows, the installation of a gas central boiler and enlarged wardrobes, the creation of a green room in the annex, and the creation of a make-up room. Since the theatre's opening, over £30,000 has been spent on improvements, with the use of volunteers, known as the Wednesday Working Party, helping keep costs down.

Since 1978, the company has run a junior group called the Playmakers. Between 1947 and 2005, the society/company had performed 139 full-length plays in total, of which 90 had been performed within the new theatre. 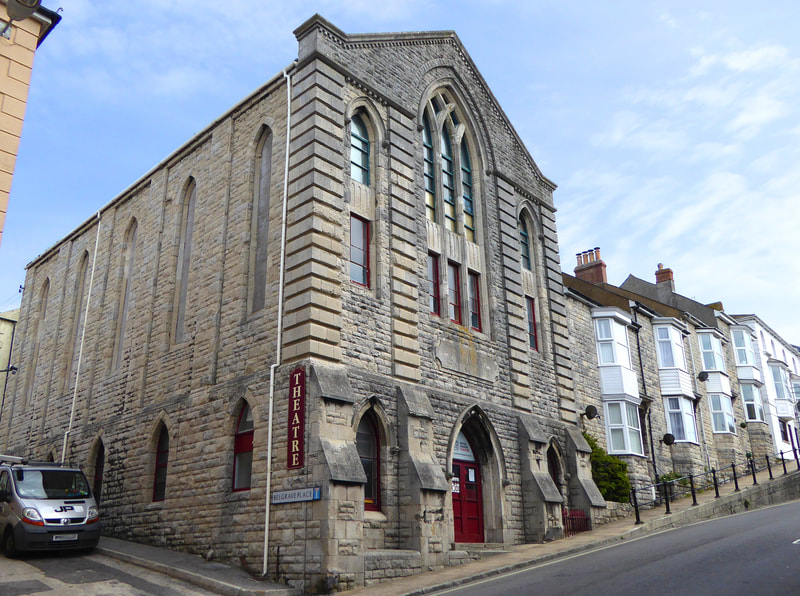 The theatre is housed in a former Primitive Methodist chapel, built in 1869. 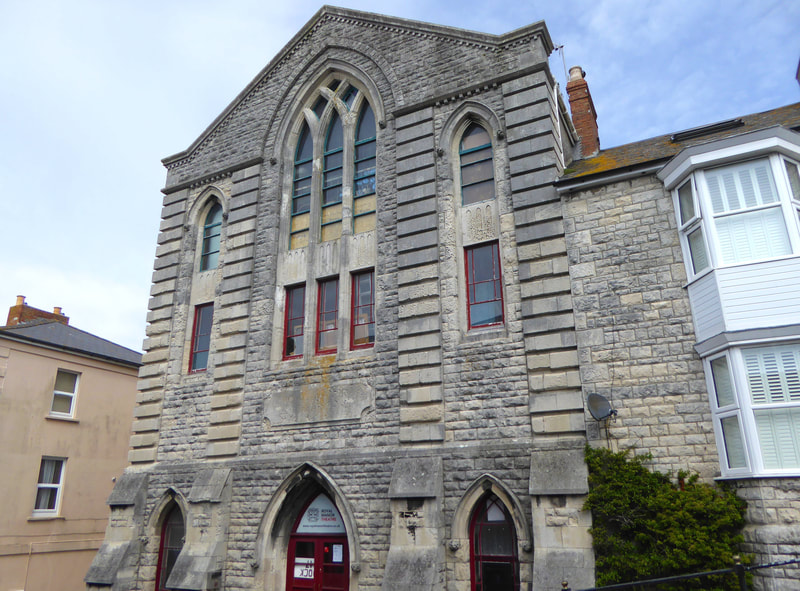 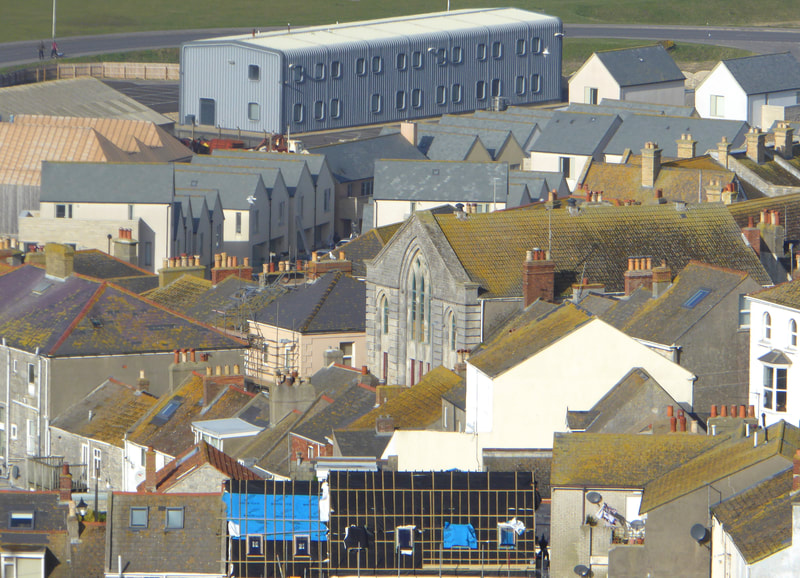 The theatre as seen from New Ground.