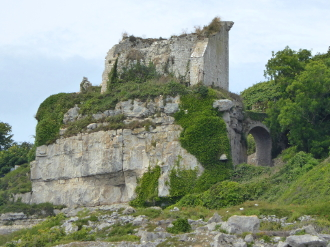 Rufus Castle, also known as Bow and Arrow Castle, is a ruined castle overlooking Church Ope Cove, the remains of which have been dated to the 15th century. It is Portland's oldest castle and is reputed to have origins dating back to the late 11th century when an earlier defensive structure was built in the area for William II, King of England.

It is believed that the ruins seen today replaced the earlier defensive works. Some sources have speculated that the existing structure is built on the site of an earlier keep, which would have formed part of a larger castle or stronghold.

Built of Portland stone, the pentagonal-shaped castle has a number of late Medieval putlog holes and gunports, which have been erroneously referred to as arrow loops, in turn giving the castle its alternative name, Bow and Arrow Castle. It is believed that the foundations to the north, along with a stepped plinth to the west, are of earlier origin than the rest of the 15th century ruins.

Some of the castle has been lost to erosion over the years, but surviving features include parts of the outer bailey, sections of wall and a round-arched bridge spanning over Church Ope Road, the latter of which was built in the early 19th century. The castle and its bridge have been a Grade I listed monument since January 1951. In addition to this, the castle is a scheduled monument, protected under the Ancient Monuments and Archaeological Areas Act 1979.

History
Church Ope Cove was traditionally seen as a vulnerable spot for enemy raiders attempting to land on Portland's coast. The first recorded account of a Viking attack on the British Isles occurred at Portland in 789 AD, and although the precise landing spot remains unknown, it has been suggested that the cove was one of the most likely locations. The Saxons built the first defences in the area and taxes were later raised in the late 11th century to construct new defences for the island, including at Church Ope, by William II, who reigned as King of England between 1087 until 1100.

The earliest record of a castle on Portland dates to 1142, at the time when the civil war known as the Anarchy (1135-53) was being fought between Stephen, the King of England, and Empress Matilda, the daughter of King Henry I. The Empress invaded England in 1139, with support from her half-brother, Robert, Earl of Gloucester. During 1142, with the siege of Oxford in progress, the Earl successfully captured the island's castle, among other Dorset castles, from the King.

On 12 December 1257, Adomar Winton, the half brother of King Henry III and Bishop of Winchester, was granted a licence to "strengthen the island of Portland, with stone and lime and to crenellate it like a castle, as he shall think most expedient". Later on 7 February 1259, a similar licence was received by Richard de Clare, the Earl of Gloucester and Hertford. It is believed that any work carried out under either or both of these licences included the site overlooking Church Ope.

The present ruins of Rufus Castle have been dated to the 15th century, suggesting the castle was rebuilt. It is likely that the rebuilding was funded by Richard, the Duke of York, sometime between 1432-60 as no expenditure on the castle is recorded in the Royal Accounts for Portland. The castle's continued to defend the coast from foreign raiders and was one of a number of fortifications with similar roles, including examples at Fowey, Dartmouth and Portsmouth. It is believed Rufus Castle fell into disuse once the construction of King Henry VIII's Portland Castle was carried out in 1539-41.

The politician and writer John Penn became the owner of the castle at the beginning of the 19th century. Between 1797-1800, he had his Gothic Revival mansion Pennsylvania Castle built overlooking Church Ope and as part of his expansive grounds, Penn had the ruins of Rufus Castle and St Andrew's enclosed. The ruin remained inaccessible to Portlanders and visitors while under Penn's ownership, although successive owners of Pennsylvania Castle would usually allow visitors.

During his time of ownership, Penn had a round-arched bridge added to the castle, which spanned over the lane leading from Church Ope Road and connected the castle to the field known as Castle Hays. The Norman style arch providing access into the castle from the bridge is of the same date and was made large enough for Penn's carriage to pass through. Penn also added another arch on the castle's south (seaward facing) side after the original collapsed.

In 1965, the then-owners of Pennsylvania Castle had Rufus Castle's adjoining land developed with the construction of a three-bedroom detached bungalow, Castle Keep. The ruins were enclosed in its garden. The property was sold to Keith Allsop in 1983 and he intended to restore the castle, but the project never came to fruition. In 1997, Mark Watson of Bournemouth bought the castle from the then-owners of Castle Keep for £1 and announced plans for its restoration and opening as a tourist attraction, but this also failed to materialise.

Restoration
In 2010, English Heritage granted £150,000 for urgent restoration and consolidation work on the castle. The castle was added to the "Heritage at Risk" register a number of years beforehand (as early as 2003), but only some emergency repairs had been carried out to stabilise the ruins before 2010. The historic building and church architect Russ Palmer of Honiton drew up the repair scheme and the work was carried out by Carrek Ltd of Bristol between May and November 2010.

Preliminary work included making repairs to the north walls, which involved core drilling and the removal of ivy. The main restoration work included the consolidation and repointing of the ruins. As the addition of the 19th century bridge had caused some structural issues, the wall above it was partially rebuilt and strengthened with cintec anchors.

Following the work, English Heritage and the then-owners of the castle formed an agreement allowing the castle to be opened to visitors at certain times during the peak season of 2013. To date, the castle remains in need of further repair and as such it remains on the "Heritage at Risk" register. Historic England are in discussion with the castle's new owners, who bought the bungalow and castle in 2016.

Design
Rufus Castle is built of Portland stone and is constructed in the form of a pentagon. It has seven feet thick walls, pierced by numerous circular gunports. The surviving ruins have no roof. The north and west walls remain at their original full height, and they also retain a number of shaped corbels along their tops. The south-west side has a gateway, as does the north side, the latter being added in the 19th century along with the bridge. 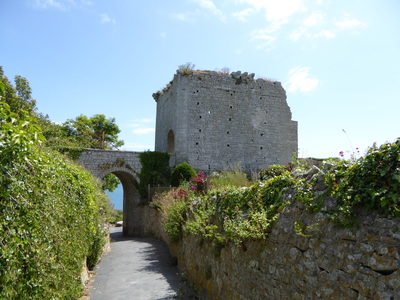 The castle as seen from the lane leading from Church Ope Road. 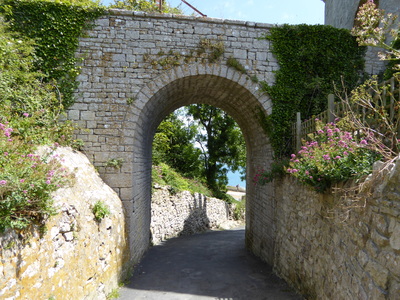 The bridge was added in the early 19th century. 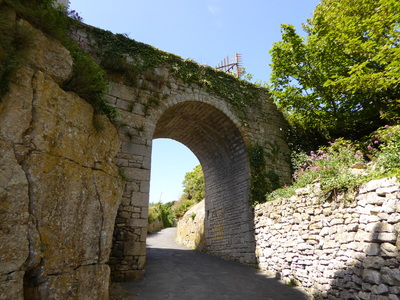 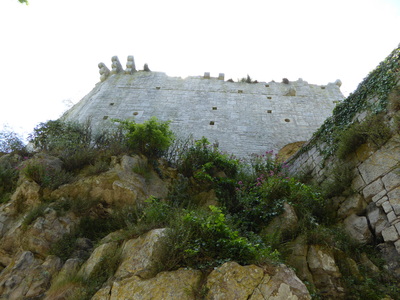 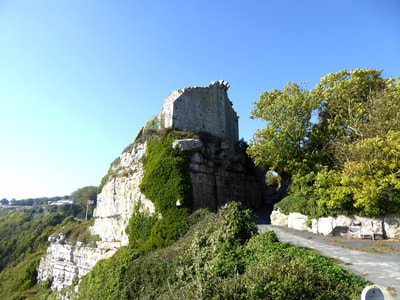 The castle seen from the viewpoint area above Church Ope Cove. 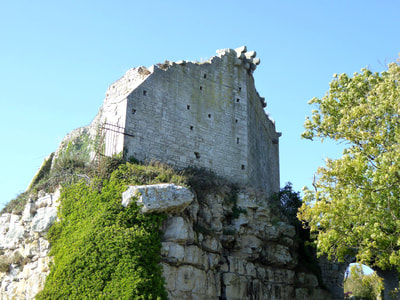 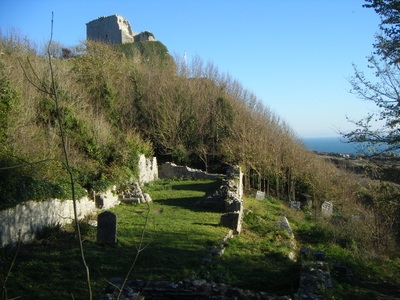 The castle seen above the ruins of Portland's first parish church, St Andrew's. 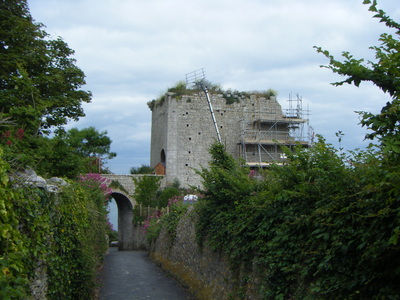 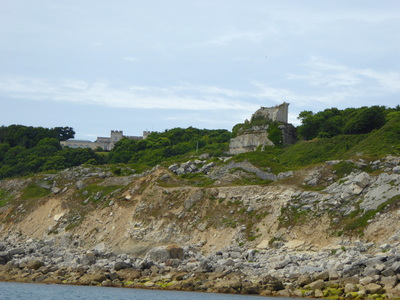 Rufus Castle as seen from the sea. 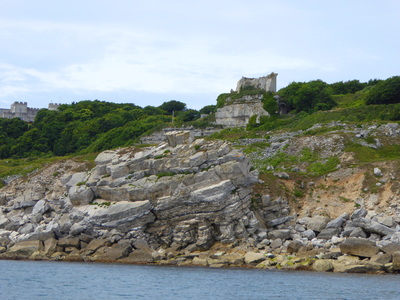 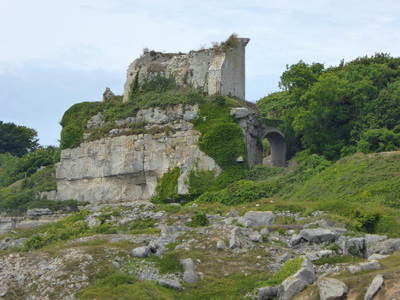 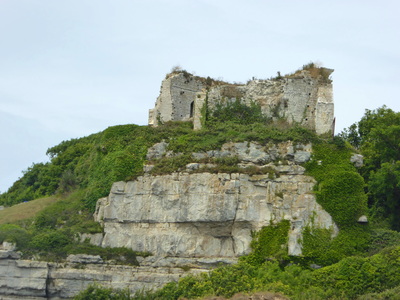 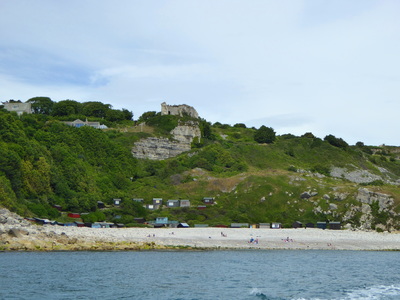 Rufus Castle as seen from the sea, with the beach of the Church Ope Cove in the foreground. 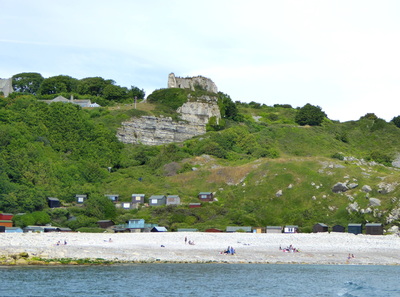 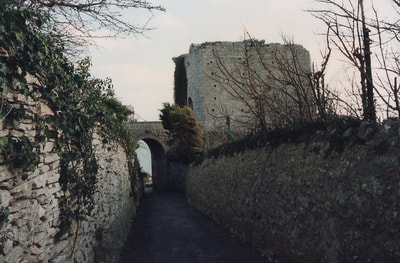 Rufus Castle seen here sometime between the late 1970s-mid-1980s. This photograph has been kindly supplied by Peter Ganley. (© Copyright.) 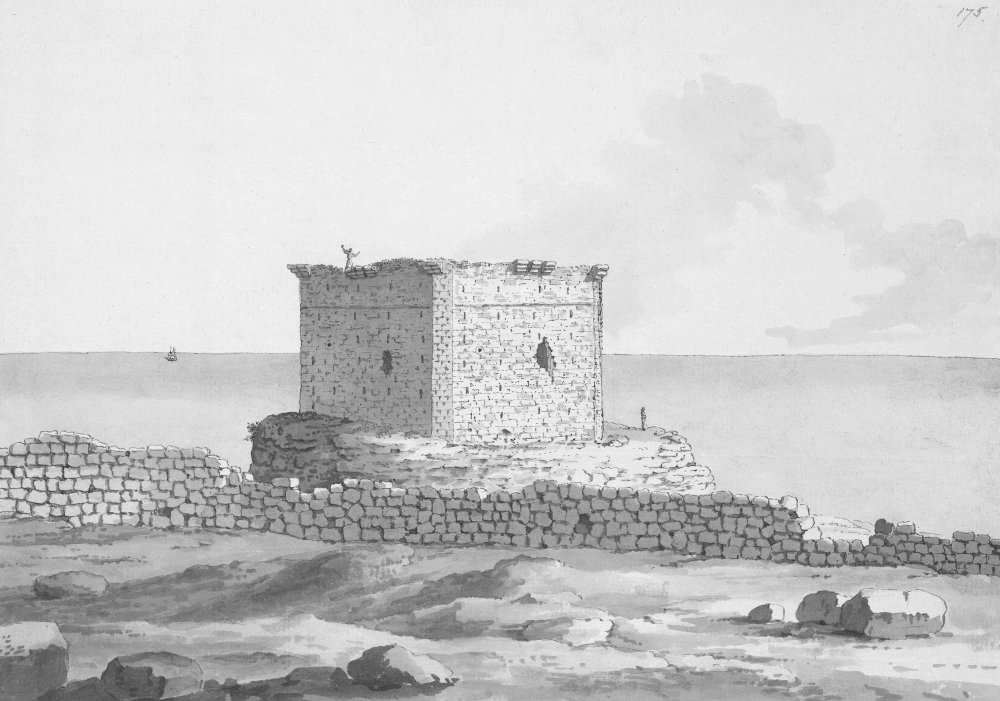 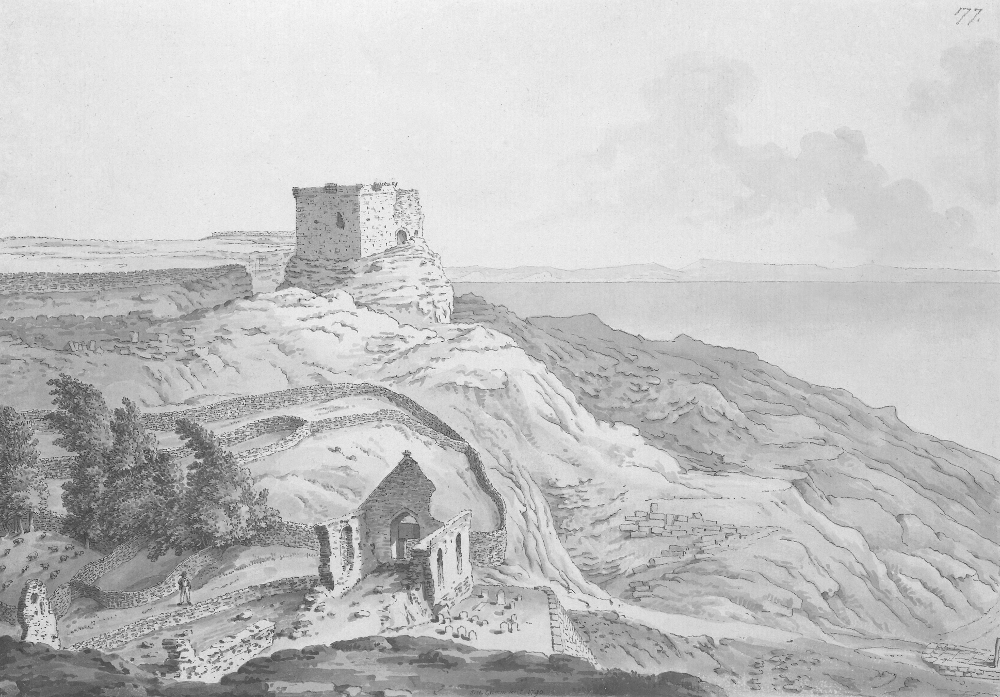 A 1790 drawing of Rufus Castle, with the ruins of St Andrew's Church below, by Samuel Hieronymus Grimm. (From the British Library collection. Shelfmark: Additional MS 15537. Item number: f.177). 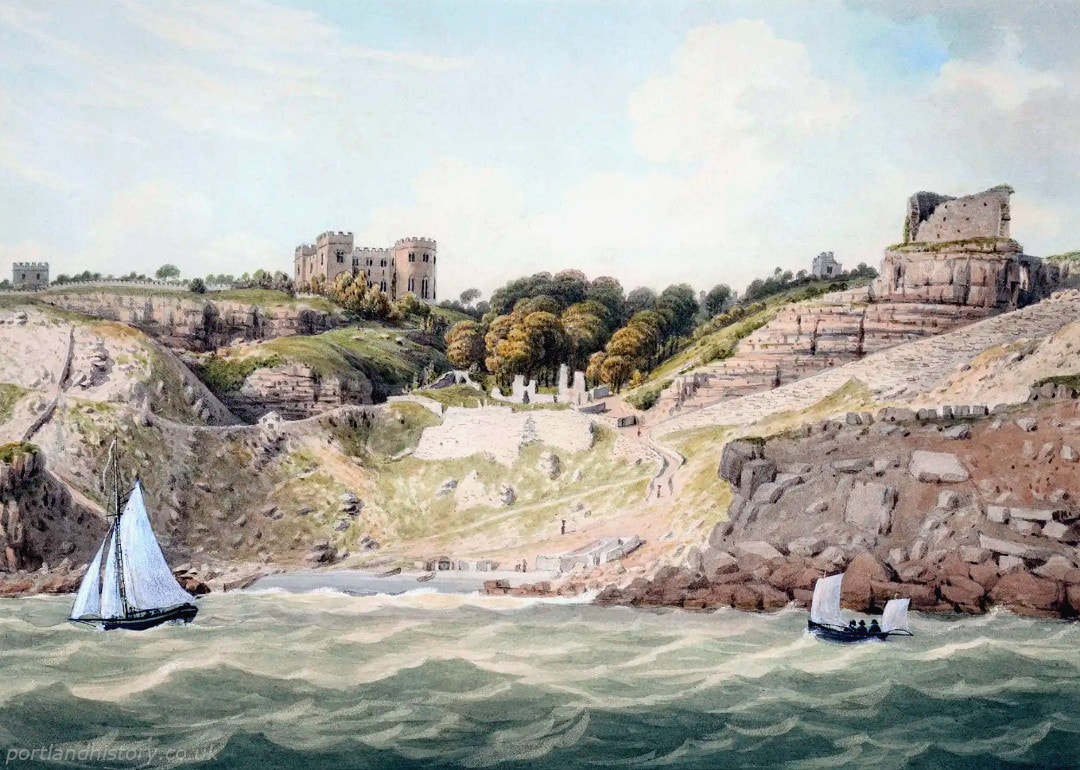 An 1821 painting of Church Ope Cove by John William Upham, showing the ruins of Rufus Castle. 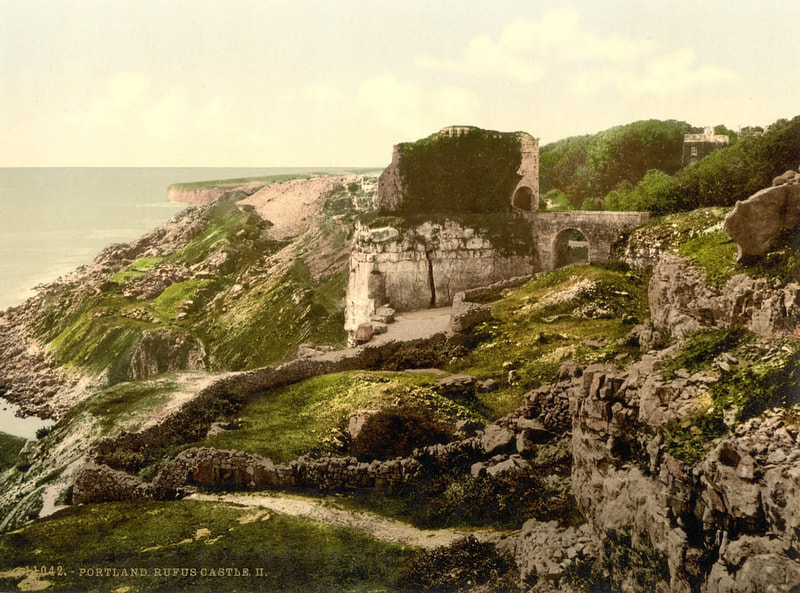 A photograph of Rufus Castle taken in the late 19th century. (Photo from the Photochrom Print Collection: lccn.loc.gov/2002708059) 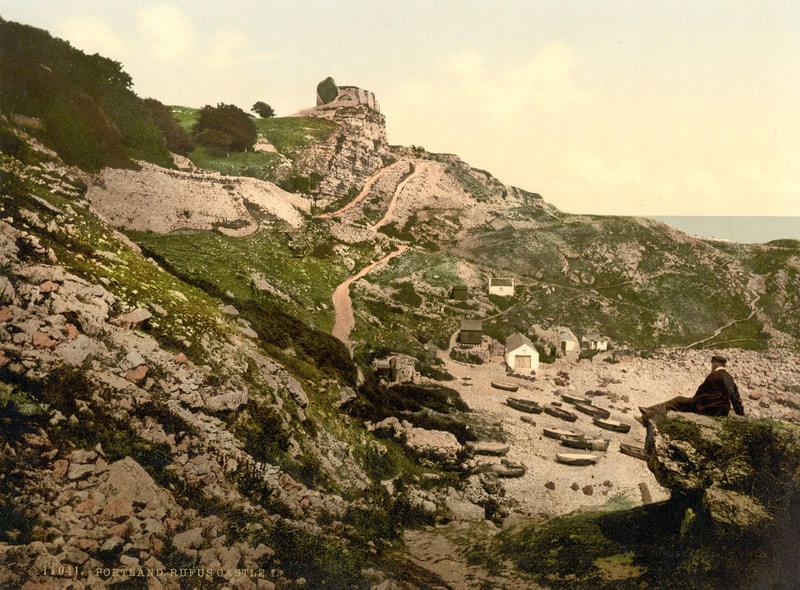 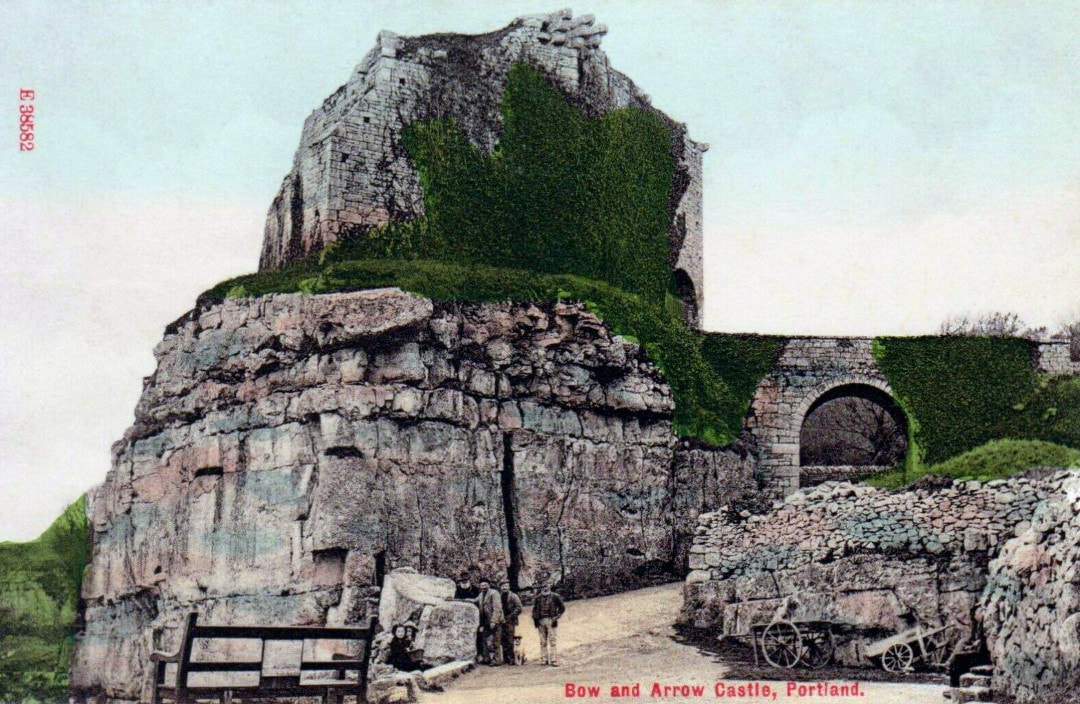 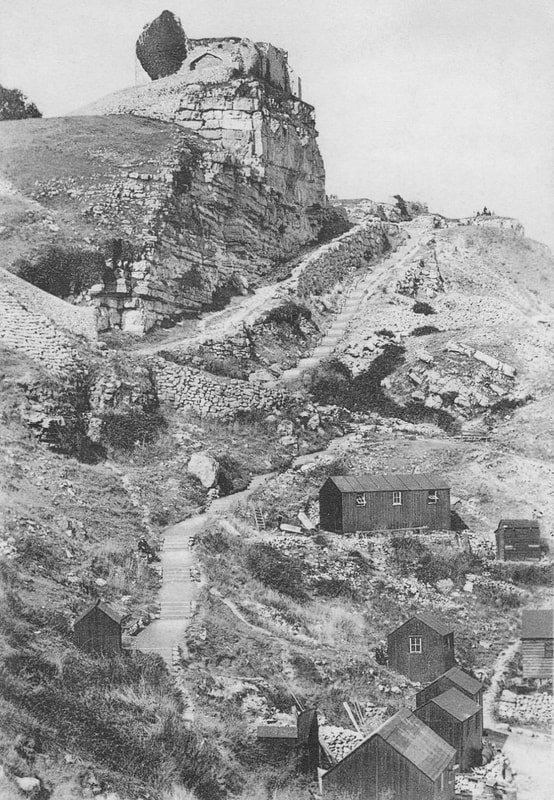 An early 20th century postcard by Léon & Lévy showing Rufus Castle above the steps leading down to Church Ope Cove. 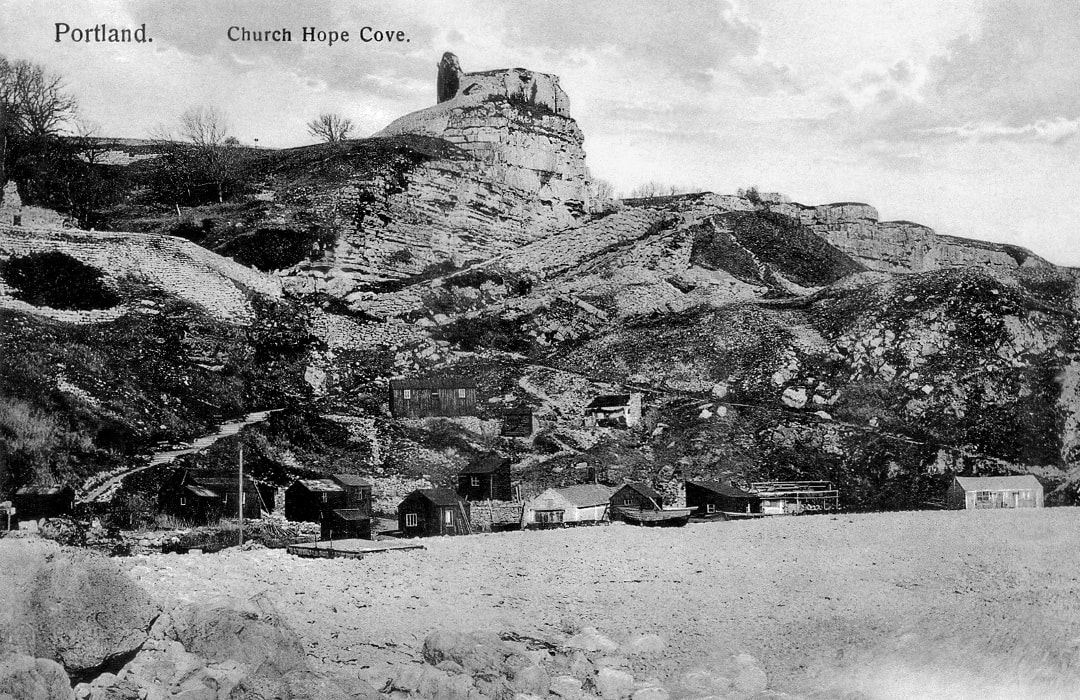 An early 20th century photograph by Edward Hitch of Weymouth, showing the castle's position above the beach. 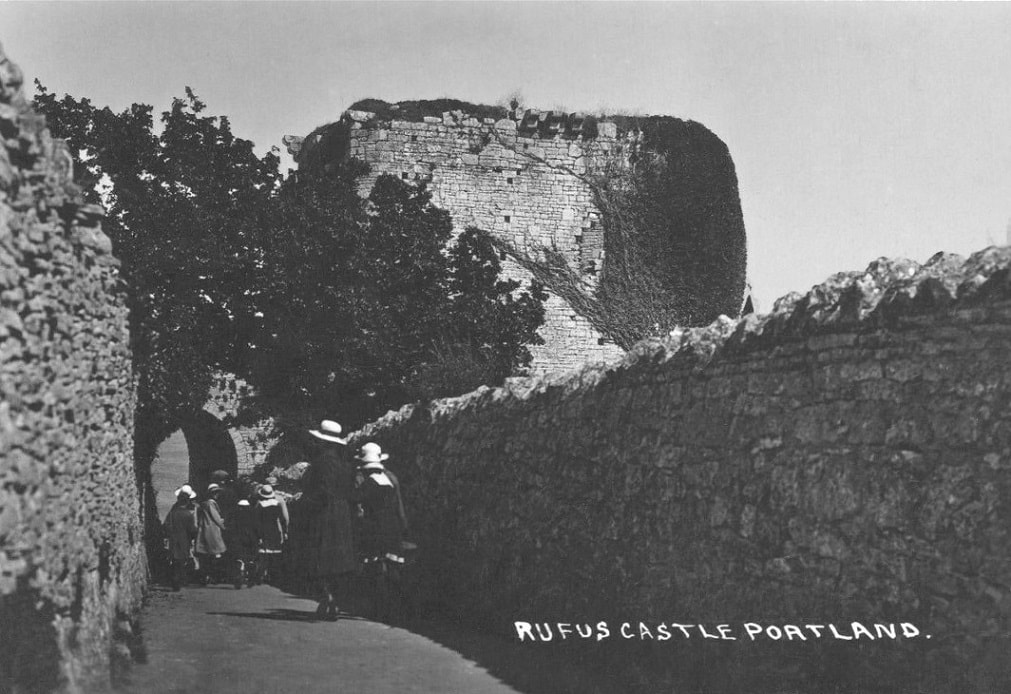 An early 20th century photograph of Rufus Castle from the west, from the pathway leading from Church Ope Road. (Photographer unknown).