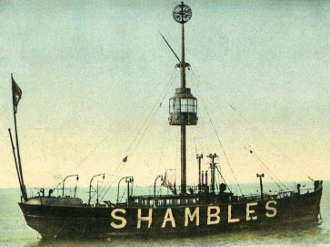 Shambles Lightship was a lightship/lightvessel, placed approximately three miles off the Portland coast to warn shipping of the Shambles Sandbank. A series of lightships were located at the sandbank from 1859 until 1976, when the final one was replaced by automatic buoys.

As with lightships across the UK in general, the name "Shambles Lightship" actually referred to the name of the location where a lightship had been placed, rather than a specific vessel. It was often the case that lightship stations received different vessels as Trinity House would frequently transfer them between different stations during their existence.

History
Establishment of the Shambles Lightship
For centuries, Portland's position in the English Channel, with its treacherous coastline, has made it a major shipping hazard. Both Chesil Beach and Portland Bill in particular have been the location of many shipwrecks. The narrow promontory of Portland Bill is notably dangerous because of its shallow reefs and ledges such as the Portland Ledge, the Shambles sandbank to the south-east, and the Portland Race - a tidal race caused by the clashing of tides, and further exacerbated by the reduced depths over the Portland Ledge. The Shambles Sankbank is situated south east of Portland Bill, stretches for four miles, and is only feet below the waterline at low tide, making it a danger to passing vessels. Many have met their fates at the sandbank, including the Earl of Abergavenny, who sank in Weymouth Bay after hitting the sandbank in 1805.

Although a pair of lighthouses had operated at Portland Bill from 1716, the sandbank still presented a threat to passing ships. In July 1824, the Corporation of Trinity House decided to place two buoys on the Shambles, in the effort to aid navigation and reduce the number of incidents on the shoal. A red buoy was placed at the east end of the sandbank, and a black buoy at the west end. While the new navigational aids proved adequate, the mid-19th century transformation of Portland Roads into a harbour of refuge soon made it necessary to provide new means of warning passing vessels of the sandbank.

Approval of the required expenditure to place a lightship at the Shambles was gained from the Board of Trade in December 1858, allowing Trinity House to announce the lightship in January 1859. The announcement stated: "The Harbour of Refuge at Portland being now so far advanced as to afford safe anchorage for vessels seeking shelter therein, the Corporate of the Trinity House of London has given notice that, with a view of facilitating the entrance to that harbour, it has determined upon placing a light-vessel at the east end of the shoal called the Shambles, to the southeast of the Bill of Portland. The light-vessel will be placed on or about the 1st of September, 1859, and exhibit a fixed white light."

As planned, the lightship was moored at the Shambles on 1 September. The lightship, like all successors, had 'SHAMBLES' painted on the sides. It was moored at the east end of the sandbank, in 15 fathoms of low water at spring tides. The original one-masted vessel was painted red, with its fixed white light displayed at an elevation of 38 feet above sea level. This light was visible for 10 miles in clear weather. In addition to its light, the lightship would sound a gong as a fog signal, and would fire a gun should a vessel be seen heading into the danger of the sandbank.

Late 19th and early-to-mid 20th century operations
In 1883, the original lightship was replaced by its first successor. This vessel sounded a reed as a fog signal, which was later replaced by a two-note siren. Over time, various successors would take the place at the Shambles station. One recorded example was the Trinity Light Vessel No. 50, which served on many stations, including the Shambles, where it was stationed in 1891.

During World War I, the threat against Allied ships from German U-Boats in the English Channel resulted in various incidents close to the Shambles Lightship. One example was the coaster SS Holmtown, which was sunk by SM UB-59 close to the lightship in February 1918. With the outbreak of World War II, the U-Boat threat returned, along with German naval mines which caused shipping causalities close to the Shambles. Ten days into the war, on 10 September 1939, U-26 had laid 18 mines within one mile of the lightship. Five days later, it would claim the Belgian cargo ship MV Alex Van Opstal. Two further incidents saw the Dutch cargo ship SS Binnendijk and the Greek cargo ship SS Elena R sink after striking mines in October and November 1939 respectively. The two ships struck their mines only 2-3 nautical miles from the lightship.

World War II also brought the threat of air raids and Portland became a natural target due to its naval base. At a time when air raids were increasing, concerns were raised about the Shambles Lightship as not only was it a vulnerable target, but it was feared the light could also be used to help German aircraft, E-boats and other enemy vessels to navigate around that part of the English Channel. With the decision to remove the lightship, the light was extinguished on 1 August 1940, while the crew and stores were taken by boat to Weymouth. On 6 August, the lightship was towed into Portland Harbour and would not return until after the war.

In 1946, Trinity House had a new lightship built, which was then placed at the Shambles in 1947. In the Portland Urban District Council's official Portland guide, from circa 1962, the lightship at that time was described as being: "easily seen by the naked eye in the daytime, and marked by night by its revolving light, visible for 10 miles. The lantern contains eight lamps giving a double flash every half minute. There is a flash of five seconds, an eclipse of six seconds, then a flash of one and a half seconds, followed by an eclipse of seventeen and a half seconds." The lightship used a diaphone as a fog signal.

Decommissioning of lightship
In 1971, Trinity House attempted to replace the lightship with a large automatic navigational buoy, known as the Lanby I. Trinity House had become concerned over the rising costs of their lightships since the late 1960s and ordered the 84-ton Lanby I for a cost of £160,000 in late 1969. This type of buoy was first developed in the USA by General Dynamics, and in the early 1970s, Hawker Siddeley Dynamics began developing the buoy for use in British waters. Initially, plans were announced in 1969 that the buoy would undergo a six-month trial in the North Sea, before replacing the lightship at Portland Bill. However, the buoy later underwent operational testing at Portland Bill in 1971. It was moored on the Shambles by divers of the Royal Navy. The buoy was the first of its type in Europe.

The lightship was withdrawn on 30 September 1971, but returned the following month due to technical issues with the new buoy. The Lanby I was removed to correct its faults and then returned on 1 November 1971, when it was placed at a temporary position near the lightship. The lightship was withdrawn again on 12 November, but it returned on 26 November after the buoy suffered further faults. In late 1973, plans were announced for the lightship to be replaced in March 1974 by a new 100-ton Lanby buoy, but this plan did not come to fruition.

A lightship on the Shambles remained in place until April 1976, when it was replaced by American-designed "High Focal Plane" automatic buoys, which had electric fog and radio signals, as well as bell and radar reflectors. Over the course of the 1970s and 1980s, the majority of UK lightvessel stations were replaced by automatic buoys, including light floats or LANBY buoys, which were significantly cheaper to maintain.

Today, two automatic buoys remain in place on the Shambles; the West Shambles Buoy and the East Shambles Buoy. The west buoy has a colour pattern of yellow-black-yellow, while the east buoy is painted black-yellow-black. Additionally, the Portland Bill Lighthouse has a Sector Light Room, containing a lamp that beams a white light through a red filter, which is then directed over the Shambles at night.

Crew and operations
The Shambles Lightvessel was permanently manned, like that of all Trinity House vessels. An 1861 article in the Cornhill Magazine described lightshipmen of the time as being paid 55 shillings a month (in addition to drawing 1 shilling and sixpence a week "in lieu of 3 gallons of small-beer"): the vessels were supplied, and the crews relieved, once a month. It was also noted that "a general tone of decent, orderly and superior conduct" was observed, that the men were "very respectable [...] swearing and profane language are [...] prohibited" and that every man was supplied with a bible as well as "a library of varied and entertaining literature".

By the start of the 20th century, Trinity House lightvessels had a crew of 11, of whom 7 (a master and 6 ratings) would be on active duty at any one time. It was an extremely demanding and dangerous profession, and it would take 15 to 20 years of service to be promoted to master.

Traditionally, the Mayor of Weymouth would be taken to the Shambles Lightship each Christmas by the local lifeboat, where festive gifts would be handed to the crew.

During the early 1960s, the Cosens pleasure steamer Consul regularly took visitors on special cruises out to the lightship. A regular feature on the trip was for a crew member to gather items of interest from passengers, including magazines and newspapers, which would then be handed over to the lightship crew. On some cruises, passengers would also be offered the chance to buy various luxury items such as chocolate to donate to the lightship crew. The goods would be transferred using a heaving line and a bucket, but on other occasions Consul would place her bow towards the stern of the lightship, allowing the goods to be transferred. The lightship crew would often exchange the donated goods with freshly caught fish. On an August 1960 'Steamer Trip' poster, from Cosens & Co., Limited, 1 August and 6 August cruises included 'Tea Cruise to the Shambles Lightship', with it being noted that "newspapers, magazines, etc., are welcome aboard the Lightship." 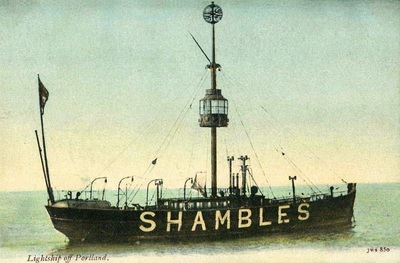 The Shambles Lightship, as seen around 1900, on a vintage postcard by J Welch and Sons of Portsmouth (JWS 850).