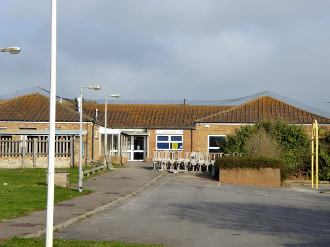 Southwell County Primary School was a primary school of late 20th century origin in Southwell. It educated boys and girls from the age of seven to eleven and, according to the Good Schools Guide, held a total of 194 pupils around the early 21st century. The school was built in 1978-79 and closed in 2016. Its motto was "Love to Learn, Learn to Love".

History
Since the mid-20th century, Southwell, like many of Portland's other villages, had undergone considerable expansion with various new housing developments being built. A school at Southwell was first announced in October 1972, when the Dorset County Education Committee proposed to build a county infant school there. In November 1973, as part of new proposals to re-organise Portland's educational facilities, plans were announced to build a county first school in the village, which would serve up to 420 pupils aged five to nine. Planning permission for the school was obtained in April 1975 and a compulsory purchase order for the land was made in mid-1976. However, when Dorset County Council faced strong local opposition against the re-organisation plans for Portland's education, the idea of a first school for Southwell was dropped.

New plans were then drawn up for a primary school to accommodate up to 280 children, with an October 1977 meeting of the County Education Committee confirming that a sum of £91,670 was to be spent on building the school. The council sought tenders for the school's construction in January 1978 and the contract was soon awarded to Bartlett Building Contractors of Yeovil. Work commenced that year, after planning permission was approved in March, and the school was completed in 1979 on an open site to the north-west of Southwell, close to Sweet Hill.

The school had its own playing field, playground, car park and landscaped areas. Each set of classrooms were designed to have their own entrances and included practical teaching areas. Other features included a gymnasium, library and school centre. Although the school opened in September 1979, an official opening did not take place until 4 July 1980. On the day, County Councillor and Portland Town Mayor Stuart Morris unveiled a commemorative plaque, carved by the Portland stonemason Cecil 'Skylark' Durston.

The school's first headteacher was Mrs Joan Clayton, who was head until 1989. Her successors included Miss Barbara Tilbrook, Mr John Bennett (acting headteacher) and Mrs Valerie Lyons. Mr Stuart McLeod took the role in 1996 and would go on to be the school's longest serving headteacher. Although McLeod had been appointed in July 1995, other commitments meant he did not start his new role until 1 January 1996, leaving Mrs Sue Stockham to serve as acting headteacher until that time.

In July 2005, the school celebrated its 25th anniversary with a special assembly, which was attended by Stuart and Heather Morris, and John and Sue Darler, as guests of honour. During the assembly, John Darler, who was chairman of governors in 1980, unveiled a time capsule for the school, which was buried underneath a new flagpole soon after the anniversary.

The school was graded 'Outstanding' following an inspection by Ofsted in July 2009. In 2011, it ranked in the table for the nation's top 200 schools for Key Stage Two SATs exams, and was also Dorset's highest performing primary school, both in terms of raw results and in value added data. The school's pupils had achieved 100% for reaching level four in Maths and English, while that same year saw the teaching assistant Dianne Stone win the South West Teaching Assistant Award in the Pearson Teaching Awards.

In 2012, the school elected to merge with four other local schools and become part of the Isle of Portland Aldridge Community Academy. It held its final school assembly in July 2012 before joining the academy. Of those who attended were past and present teachers, governors, Portland Mayor Councillor Sylvia Bradley and Councillor Les Ames. Headteacher Stuart McLeod, who described the assembly as "the end but a new beginning", was presented with the school flag.

Southwell Primary School became one of five campuses, known as "Southwell Campus", from September 2012, with Stuart McLeod appointed the head of campus, alongside the role of IPACA's vice principal. A month later, the academy put forward plans for a new £14 million campus to be established at Southwell Business Park. The controversial plans were rejected by Weymouth and Portland Borough Council, but overturned by government in 2014 after an appeal. Jackie Thomas took position as the school's head of campus following McLeod's retirement in 2015.

The new Southwell campus at the business park opened in September 2016, which resulted in the closure of both the Royal Manor Campus and the Southwell Primary School Campus. An open day was held on 16 July 2016, which commemorated the school's 37 years of education and saw McLeod give a talk on its history.

Following its closure, the school was returned to Dorset County Council, who approved the disposal of the site, along with several other properties, in the attempt to make savings of £100,000. It was revealed that the Homes and Community Agency had expressed interest in the site to build homes for first time buyers. In November 2017, an outline planning application was submitted by the agency, proposing to demolish the school and construct fifty-eight houses on the site. Approval was received in January 2019, with demolition work commencing that month, and the 3.2 acre site was then listed for sale by Lambert Smith Hampton in March.

Garden features
In 2003, the school opened a Japanese-style courtyard garden, which had been planned since 1997. At that time, the school had a blind pupil, Shani Stone, who inspired the school's staff and pupils to create a multi-sensory garden. Following a period of fundraising, the garden was created and opened in October 2003. Stone, who was then a pupil of Royal Manor Arts College, cut the ribbon alongside Dorothy Dawson on the opening day. The garden had various features, including a wooden walkway surround, bamboo screening, fossils, a water feature, perfumed flowers and benches.

In 2014, the school invited the nearby Southwell Smiley Faces Nursery to transform an unused, overgrown plot of their land into a wildlife garden and outdoor classroom. It was awarded the best wildlife-friendly garden in the community by the Dorset Wildlife Trust in July 2016.

Headteachers
References
The following is an A-Z list of references for this page. 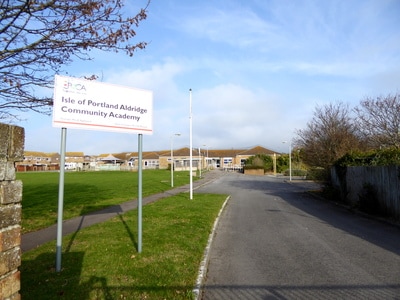 The view of the school from the front gate. 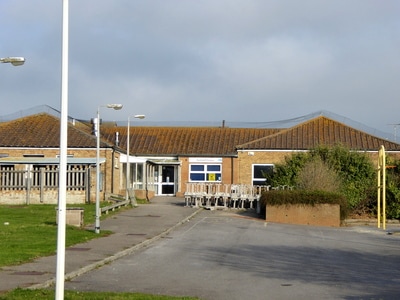 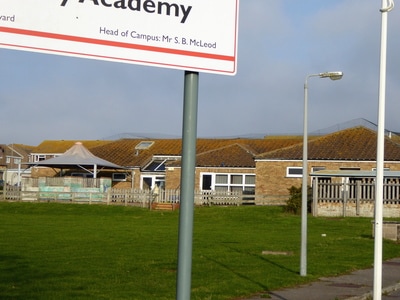 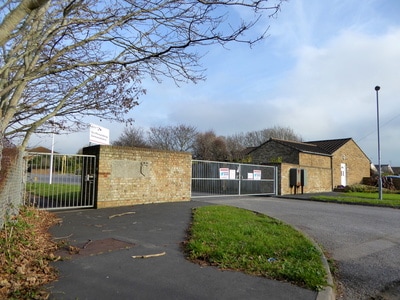 The former entrance to the school. 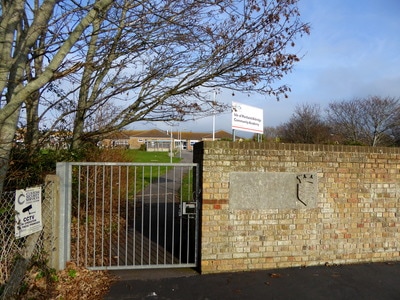 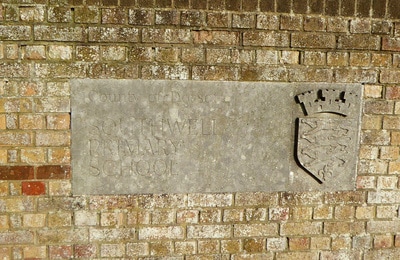 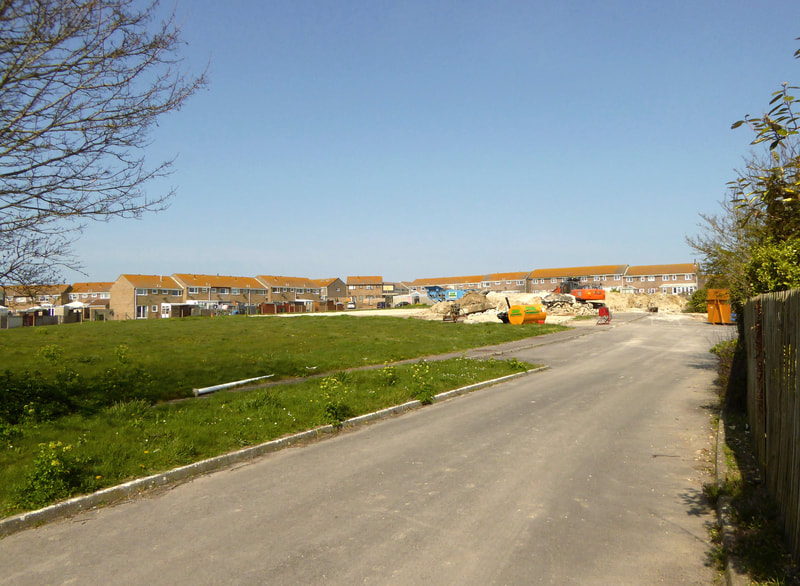 The site of the demolished school as it appeared at the beginning of April 2019. 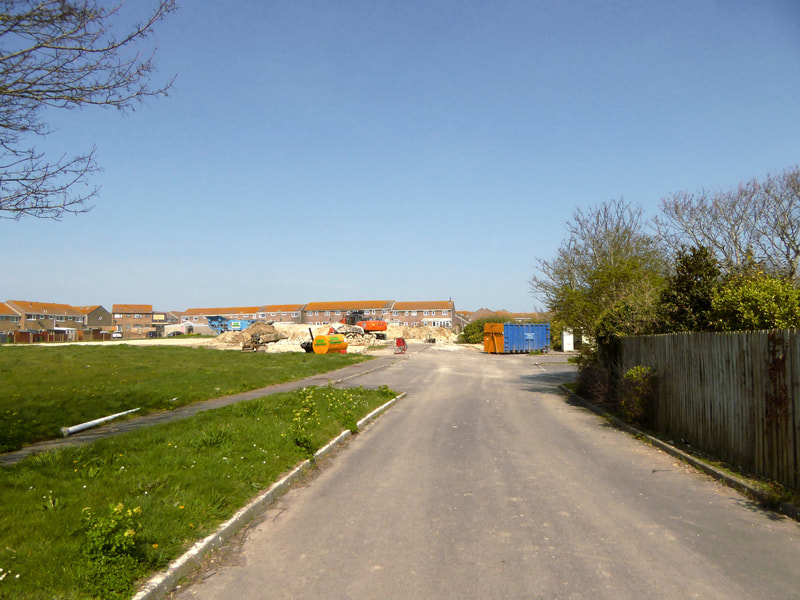 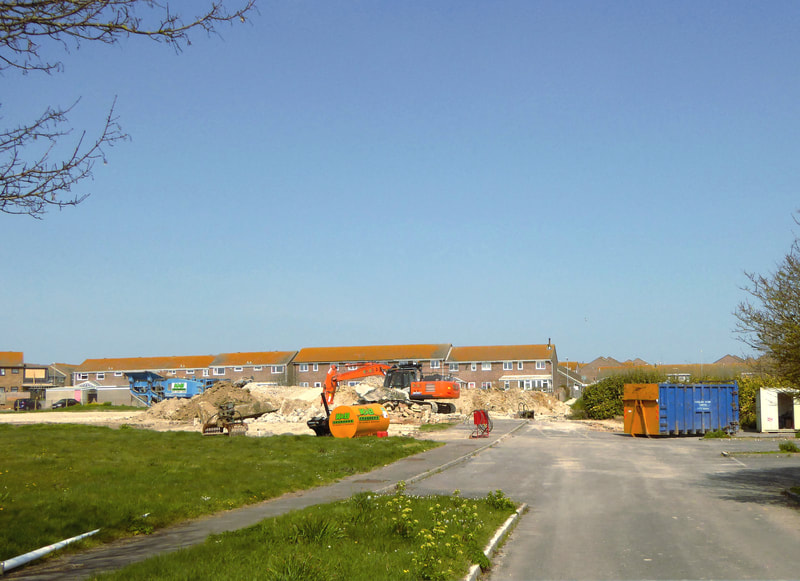