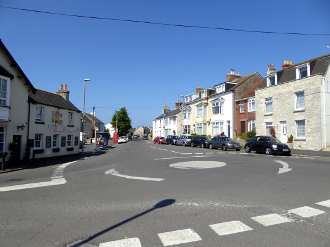 Southwell is a village in Tophill, south of Easton and Weston, and north-east of Portland Bill. It is both Portland and Dorset's southern-most village, and is the only village on the island not to be a designated conservation area.

The Great Southwell Landslip, named after the village, remains Britain's second largest recorded landslide, which occurred in 1734 between Durdle Pier and Freshwater Bay, at a distance of one and a half miles.

History
Southwell's origins as a settlement likely dates back to the Roman or early medieval period. With the area's natural springs providing a water supply, a pond and various wells were most likely created during the time of Roman Britain. Southwell's name derived from the South Well found alongside the settlement's pond, which were located on its western edge, and today at the southernmost point of Avalanche Road. The surrounding area has seen many archaeological discoveries made, including remains of Iron Age earth defences and Roman stone sarcophagi.

Southwell's traditional industry was agriculture, with the hamlet being surrounded by lawnsheds, a form of strip farming which saw fields partitioned into long, narrow strips. Some quarrying was located to the east on the clifftops above Freshwater Bay. Southwell retained its original character and remained a small hamlet for many centuries. By 1782, it only held 27 of the island's 280 houses, and these were concentrated around the road leading to Portland Bill. In order to serve the growing Methodist following on Portland, a small Wesleyan Methodist chapel was later erected to serve the hamlet in 1849, while the Avalanche Memorial Church, also known as the Church of St Andrew, was also built there in 1878-79 to serve the residents of both Southwell and Weston.

During the 1890s, the area west of Southwell, known as Sweet Hill, was the location of a failed attempt to provide Portland with its own sufficient water supply to serve the growing population. The Local Board of Health, established in 1867, were committed to finding a "pure and adequate water supply" and they settled on a scheme to excavate a 206 feet deep shaft at Sweet Hill, which was carried out in 1891-95 and still survives today. Once completed, however, it was discovered that the freshwater had traces of seawater and sewerage, resulting in the £7,500 scheme to be abandoned in favour of sourcing water from the mainland. A piped water supply for Portland arrived in 1899, resulting in Southwell's original pond being filled in soon afterwards.

With quarrying on the island moving inland from the traditional clifftop sites, the early 20th century saw some of Southwell's surrounding fields begin to be encroached. Sheat Quarries began to move inland towards the village from the south, while the far larger Coombefield Quarries continued to expand in the north-east. Meanwhile, the first half of the 20th century saw some new housing added to the village, most notably along Avalanche Road.

During World War II, the presence of HM Naval Base Portland saw the island a target of German air raids, with 48 attacks taking place over the course of the war. In the attempt to defend the island, a number of heavy anti-aircraft batteries were constructed within the Weymouth and Portland area, one of which was built to the west of Southwell at Barrow Hill. It was retained after the war, but was demolished when work began on the site in 1948 for the construction of Portland's Admiralty Gunnery Establishment, completed in 1952 and opened in 1954. It later became part of the Admiralty Underwater Weapons Establishment (AUWE) from 1959, and was responsible for the design, development and testing of underwater weapons until its closure in the mid-1990s. It was then transformed into the successful Southwell Business Park in 1997.

Southwell's character was significantly altered from the mid-20th century as development began on a larger, unprecedented scale. During the 1950s, some housing was built at Sweet Hill, but the following decade saw much greater expansion, particularly to the north-west. The 1970s-80s saw further housing added and the construction of Southwell County Primary School (opened in 1979), while Coombefield Quarry continued to be worked towards the village. Further housing was built off Sweethill Lane in the 2000s, despite the wishes of residents for a community space to be retained. Today, the expansion of the village to the west ranges half a mile. Although much of the original fields surrounding Southwell have been lost to quarrying and housing, the fields to the south between the village and Portland Bill survive undeveloped.

Close to Southwell's heavy-anti aircraft battery was the Weston VHF Fixer Station. It was one of a network of 57 stations built in England around 1951 as part of the ROTOR programme, an air defence radar system developed to counter potential nuclear attack by Soviet bombers. Operated by the Royal Air Force, the station's role was to use directional finding equipment to inform fighter aircraft crews of enemy positions. It was demolished in the 1960s.

Grade listed features
The surrounding fields between Portland Bill and Southwell are an example of a strip field farming system, dating from Saxon times, and once common across Tophill before quarrying and housing destroyed them. These particular fields, which have escaped modern development, make up the open landscape surrounding the single road to Portland Bill. Each field has an ancient name, such as Harplands, Shoals Meadow and Sturt Corner, and some are still bordered by drystone walls and earth lynchets.

The nearby Culverwell Mesolithic Site is an active archaeological site and former Mesolithic settlement, located along Portland Bill Road. The site, which is approximately 7500-8500 years old, has become a scheduled monument under the Ancient Monuments and Archaeological Areas Act 1979. This scheduled status includes open fields to the south, spanning from Cave Hole area to the Lower Lighthouse. Another two areas of open fields have become scheduled under a separate entry too; one spans east from the Higher Lighthouse, while the other runs north-east of the Culverwell site, alongside Portland Bill Road.

Other notable buildings
Public houses (past and present)
References
The following is an A-Z list of references for this page. 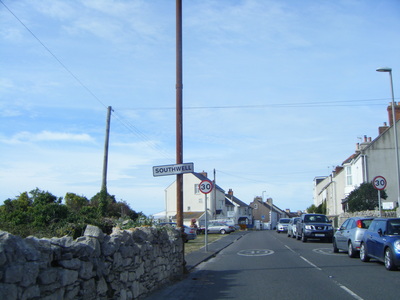 The entrance to the village from the east. 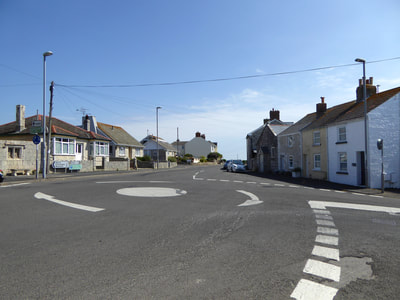 The roundabout in Southwell Street marks the centre of the original village. 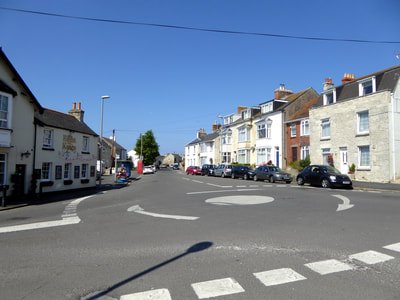 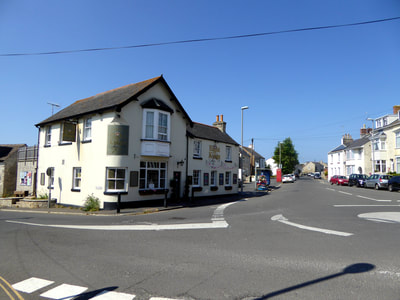 The Eight Kings pub, with the road to the left leading to Portland Bill. 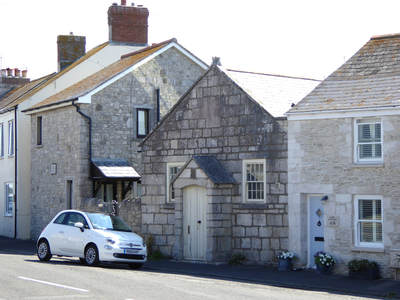 The former Southwell Methodist Chapel of 1849. 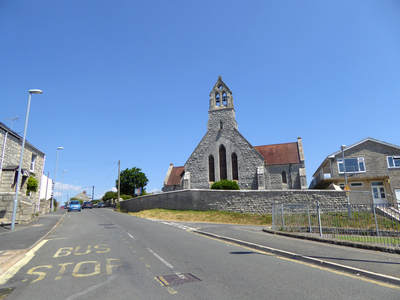 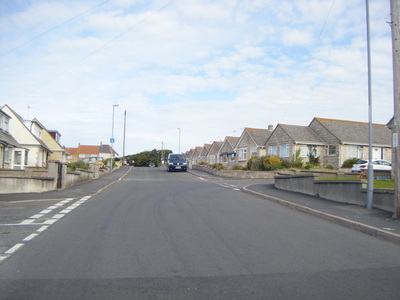 Sweethill Lane is one example of the village's mid-to-late 20th century expansion. 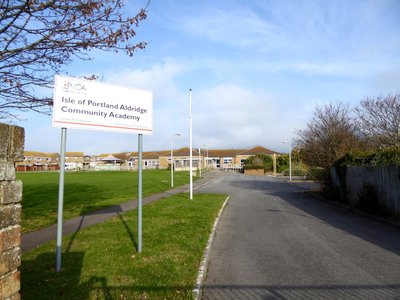 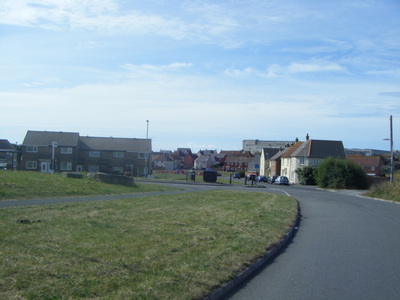 A view over the Reap Lane estate. 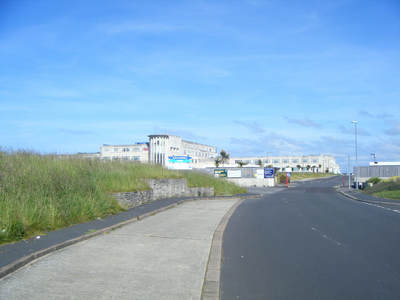 The entrance to the former Admiralty Gunnery Establishment, now the Southwell Business Park, seen in 2014 before part of the site was transformed into a school. 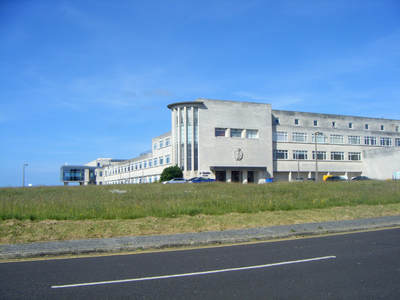 The main building of the site is Maritime House, which stands as a strong reminder of Cold War history. 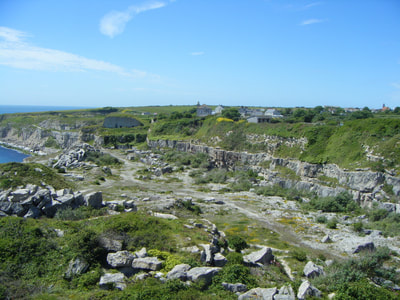 This view from the eastern coastline of Portland shows the village in the distance. At the back of this disused quarry is the Cheyne Pumping Station and Cheyne House.
On the map below the pointer is aligned to the centre point of Southwell village.