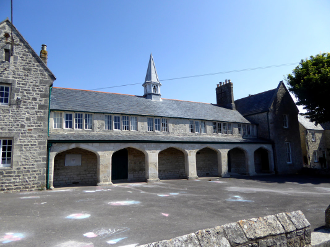 St George's Centre is a community centre in Reforne, near Easton, housed in the former St George's National School. Both the former school and infant schoolroom (now a community hall) have been Grade II listed buildings since September 1978.

St George's School was opened in 1857 and remained in use until c. 1972. The building was later acquired by the Island of Portland Heritage Trust in 1982, who transformed it into a community centre. Today, it is owned and operated by the St. George's Trust, a registered charity. The centre provides facilities for a range of activities, while many local organisations also make use of the facilities. The centre includes the Peter Trim Community Hall, Girt Hall, Skylark Studio and Royal Manor Workshops.

History
Establishment and use of St George's School (1840s-1969)
Prior to the establishment of St George's School, St John's had been established as a national school in Fortuneswell during the 1840s to provide education to the children of the poor, in accordance with the teaching of the Church of England. Later that decade, local residents demanded that a second national school be established to serve the children of Tophill. At the time, approval had been given for transforming Portland Roads into a harbour of refuge (in 1845), resulting in an increasing naval presence and the growth of Portland's population. The Rector of Portland, Rev. D. Hogarth, supported the idea of a Tophill school, but attempts to acquire land at Reforne from the Crown Commissioners was initially unsuccessful. They believed the existing day school at Straits, known as Maister's School, could be suitably extended or rebuilt, while another suggestion presented to the Crown by Mr R. Pearce, a former Crown Bailiff of Portland, was that a school could be built on Church-owned land at Wakeham.

Mr. J. Stone, the Crown Commissioners' Steward for Portland, was later swayed during a meeting with Rev. Hogarth and subsequently recommended that the land at Reforne should be granted, which the Crown did on 30 July 1846. Soon afterwards, large amounts of common land on Portland was purchased by the government in connection with the creation of a harbour of refuge and construction of its associated defence works. A large compensatory sum of £20,000 was presented to Portland and in 1850, plans were approved to use some of this sum to construct the new school at Tophill and a replacement for the existing premises of St John's School in Fortuneswell. The plans for both new schools were drawn up by Mr. Edward Mondey of Dorchester.

The construction of St George's School at Reforne was carried out by Messrs. White and Hansford of Portland for a cost of £775, and the school, along with the new St John's, opened on 6 April 1857. St George's was built to accommodate up to 440 boys and girls, while Mr. Samuel Beale was appointed as the first headteacher. In 1870, a schoolroom capable of accommodating up to 126 infants was built at the school by Mr. Marwood. Before its construction, infants were taught in a room at the back of the school, but this became too small to accommodate them. The schoolroom later became the assembly hall. In 1878, the rector of St George's, Rev. J. A. Beazor, established a parochial library and reading room at the school "for the quarrymen and others resident in the Tophill district". It opened on 28 October 1878.

The school's average attendance was recorded as 342 in 1889, 235 in 1896 and 350 in 1905. The Portland Year Book of 1905 commented: "The mixed department has now a very nice little library for the use of the scholars, and a museum containing a good collection of Portland fossils and other interesting objects chiefly provided by the pupils." In 1911, the school's 291 children was made up of 199 boys and girls, and 92 infants.

The opening of the nearby council school known as Tophill School, which had places for infants, juniors and seniors, in 1927, eased demand for places at St George's. On 1 July 1940, the Dorset County Education Authority took over the running of St George's. With the opening of Tophill Junior School in the mid-1950s, St George's became St George's County Infants School, while Tophill School became Portland County Secondary School. In 1971, Dorset County Council decided not to renew the lease on the aging building. The school was closed in c. 1972 and the building returned to the ownership of the Crown Commissioners. The school was replaced by the new St George's Infant School at Clarence Road, adjacent to Tophill Junior School.

Transformation into and use as St George's Centre (1980-)
During the 1970s, the building remained vacant and suffered from neglect, weather and vandalism. In 1980, a public meeting held to discuss the building's future led to the formation of the Saint George's School Preservation Society, with the objective of purchasing and restoring the building for use as a community and craft centre. It was intended that the centre should focus on exhibiting and preserving the island's traditional skills and crafts. The society's plans then led to the formation of the Island of Portland Heritage Trust in 1981.

The Trust was formed with three key objectives:
Shortly after their formation, the Trust approached the Crown Commissioners with the offer of purchasing the building for £25,000. This was agreed on the condition that the sale was carried out within three months, prompting the launch of the Saint George's School Appeal in December 1981. It was intended to raise the £25,000 by 1 April 1982 and then an additional £25,000 for the building's restoration by 1 July 1982.

The appeal was successful and the Trust then began to restore and transform the former school into a community and craft centre. A project team, made up of a building team and research and development team, was formed in November 1983 to undertake the work. The project received financial assistance from the Manpower Services Commission under their Community Project Scheme. In February 1984, the Trust also purchased the adjacent Old School House using an interest-free loan provided by an anonymous benefactor. St George's was sensitively restored and additional workshops were added. In partnership with the West Country Tourist Board, the island's first tourist information centre was also housed at the centre.

In March 2012, the building benefited from a major fundraising drive, sponsored by Dukes Auctioneers of Dorchester. This antiques valuation event was to raise funds to pay for structural repairs and the restoration of the arches at the front of the centre.

Design
St George's is two-storey building built of Portland stone, with slate roofs. The former schoolroom is adjoined by the headmaster's dwelling at the west end and the matron's dwelling at the east end. An arcade spans across the schoolroom's frontage and a louvred turret on the roof provided ventilation. The open roof was built using varnished Baltic timber and braced with tie rods of wrought iron. The original windows were glazed with crown glass from Hartley Wood and Co Ltd of Sunderland. The former infant schoolroom was built in 1870 and is described by Historic England as being "an important element in the overall composition of the centre". 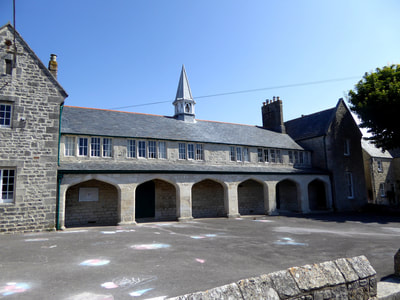 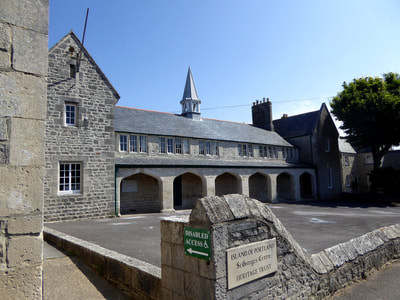 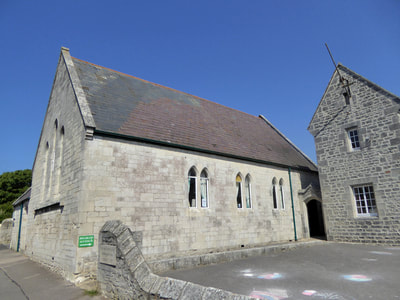 The former infant schoolroom of 1870. 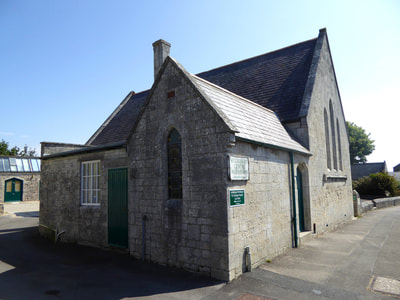 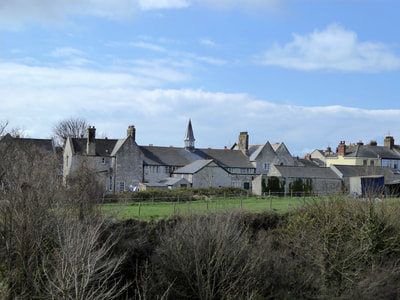 The rear of the former school as seen from Inmosthay Quarry.