The George Inn is a public house of 17th century origin at the west end of Reforne, Easton. It has been a Grade II listed building since May 1993.

History
The building was originally three separate houses of 17th century origin. The mullioned window and entrance doorway of the existing building has been dated to this period. The cottages later underwent alteration during the 18th century, which saw them merged into the current building to create a residence for William Butts, the parish clerk of the nearby St George's Church. Renamed "Clerk's House", a date-stone dated 1765 was added above the main entrance. Further alterations were made during the 19th century, when the house became the George Inn.

The George Inn is one of the oldest of the existing pubs on Portland and is reported as being one of the oldest inhabited buildings on the island. The inn was a favoured residence of Portland's Court Leet and much of this history is in evidence around the building, including an original reeve staff which was used to record rent payments. The pub has also been a reputed smugglers' haunt during its early days as a pub, with suggestions made of tunnels leading to the cliff and St George's Church. In 2011, the pub won the regional West Country Community Pub of the Year in the Publicans Morning Advertiser Awards.

Design
The pub is built of Portland stone and has a slate roof. The interior of the building has an unusual layout and includes the Quarr Barr (the main bar), the Reeve Bar, the Shilling Bar (the inn's original bar), and the Cricket Room, a dining room that is regularly used by the Portland Red Triangle Cricket Club.

This image can be enlarged by clicking on it. 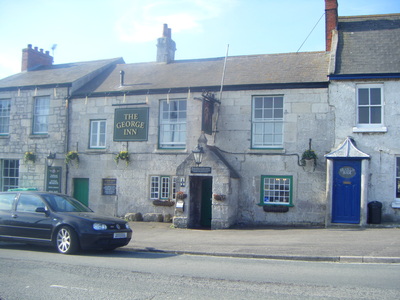 The George Inn at Reforne.