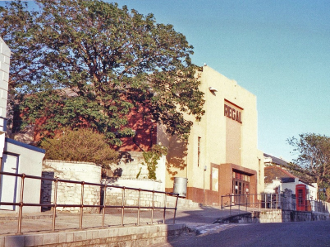 The Regal Cinema was a purpose-built cinema in the northern region of Fortuneswell. It was built in 1932 and later became a bingo hall and social club during the late 1960s. In the early 1990s, it became a nightclub, Rumours, but was demolished after becoming a victim of suspected arson in 1992.

History
Use as a cinema, bingo and social club, and nightclub (1932-92)
Portland was originally served by two cinemas in the early part of the 20th century; one at Easton, named the Palace, and another Palace at the Masonic Hall, Victoria Square. Both were established in the early 1910s by the English theatre proprietor and cinema developer Albany Ward, who ran a large cinema circuit across the UK during this period. With the introduction of talkies in the late 1920s, silent films began to be phased out and by the early 1930s, talkies had become a global phenomenon. In 1932, a new luxury cinema, the Regal, was built in Fortuneswell by local builders Jesty and Baker for the fairground family Herberts at a cost of £10,000. The building was designed by Andrews and Andrews of Weymouth in the popular Art Deco style of the period and had the capacity to accommodate approximately 500 people.

The Regal was a popular attraction throughout the 1930s and 1940s, particularly during World War II when queues frequently formed outside the entrance. The cinema was briefly forced to close in September 1940 when the manager, Mr. S. F. Rennef, accepted a new job in Bedfordshire, but it re-opened in November of that year when Mr. E. Martin took it over. In 1941, the building suffered some damage to its roof during a German air raid and had to be temporarily closed for repair.

Despite its popularity during the war, the Regal suffered with the increasing dominance of television. A new proprietor, formed as Regal Cinemas (Portland) Ltd, took over the cinema in the 1950s and had CinemaScope installed there in 1955. However, the cinema was ultimately unable to attract large enough audiences and closed in 1961. It then received new owners who reopened the cinema in 1962 and also began using the building to hold bingo sessions. The Regal closed again in 1963 and reopened under new ownership in March 1964, after a new screen and projector equipment was installed, along with reconditioned seating. During the late 1960s, the cinema was transformed into the popular Regal Bingo and Social Club. The building was sold again in the early 1970s to Leisure for the People Ltd., and the bingo hall was run by Bob Tibble, who also ran bingo at Sidney Hall in Weymouth.

In October 1987, the club's final owner, Bill Coldwell, submitted plans to demolish the building and replace it with a block of fifteen flats. The planning application ended up being withdrawn and although a similar proposal was put forward in November 1988 and subsequently approved, no work was carried out. Instead Coldwell rented the building to two tenants who transformed it into a nightclub named Rumours during the early 1990s. This revived new interest in the building, which itself was repainted light blue, in contrast to its original beige colour. One feature of the club was a large model aircraft hung from the ceiling of the dance floor in reference to Portland's role during World War II and particularly the Battle of Britain.

Fire and subsequent demolition (1992-1999)
Rumours caught fire on the evening of 31 August/early morning of 1 September 1992, at which time it was closed. The fire services arrived at the scene by 2am on 1 September and a team of over 40 firemen took part in the emergency. Although there were no injuries, residents were evacuated from surrounding houses as a safety precaution and the fire was successfully put out after three hours. As the building had suffered extensive damage, whichg was valued at over £175,000, work immediately began on clearing the interior and demolishing unstable parts of the remaining shell, including the roof and upper levels. The police soon announced the fire to be suspected arson and an investigation was launched, but the culprits were never caught. Rumours was one of a number of buildings on Portland to suffer from arson during this period; a greengrocer's shop and takeaway, located opposite the nightclub, were also victims of fire that year.

In a Dorset Echo report on the incident, published on 1 September, a spokesman for the fire brigade revealed: "There is not much left of the building. The fire damaged 95 percent of it and we will be pulling the front down today." An eyewitness from Ventnor Road was quoted: "The firemen had to go round the back because they couldn't break down the front door with their axes. It was like watching fireworks and there was so much smoke. The flames were around 30 feet high through the top floors."

In February 1994, Coldwell submitted a new planning application to demolish the remains of the nightclub and replace it with fifteen flats and associated car parking, but again the application ended up being withdrawn. In the Dorset Echo, dated 4 August 1994, it was reported that Coldwell had been fined due to the breach of a council order which gave him six months to either demolish or restore the building. He was ordered to pay a fine of £500 and an additional £285 of costs by Weymouth magistrates. Coldwell's defence explained he was recovering from a heart attack at the time of the nightclub's fire, but that he was making progress at the site. It was also revealed Coldwell had been left with a debt of £80,000 from a loan, as the nightclub's insurance company had disputed the insurance claim.

The site ended up being sold to Weymouth & Portland Borough Council, who submitted their own application in June 1998 to erect a three-storey building providing six flats. It was approved the following month and the site was soon cleared and the new building constructed. The new development was placed further back from the road, which restored the view of St. John's Church from the one-way road leading through Fortuneswell.

The first two photographs displayed below has been kindly supplied by Geoff Kirby for inclusion on this page and so the copyright is attached to him. The photograph on his Exploring Portland website can be found here: Fortuneswell North 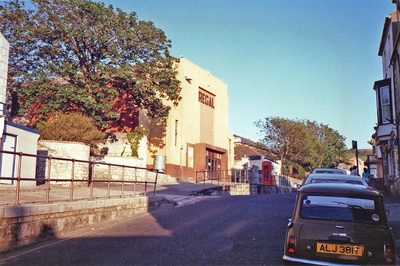 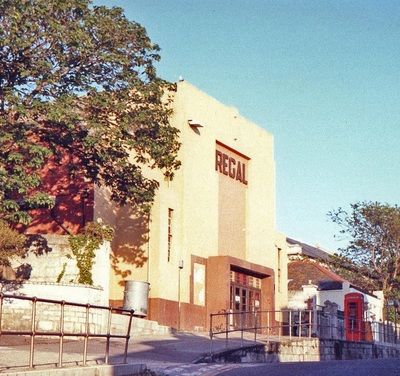 A closer look at the cinema from the same photograph. (© Copyright Geoff Kirby.) 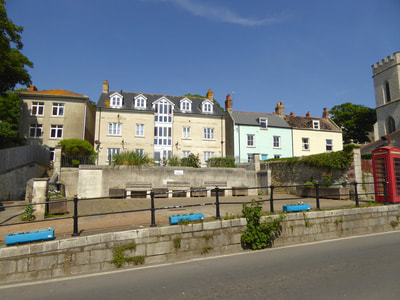 The site of the Regal Cinema, with the new development of apartments set further back from the road.