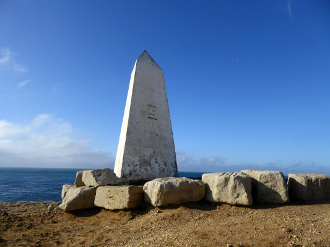 The Trinity House Obelisk, also known as the Trinity House Landmark, is an obelisk of mid-19th century origin at Portland Bill. Built at the southernmost tip of Bill Point, it has been a Grade II listed monument since September 1978. The obelisk, approximately 30 feet in height and built of Portland stone, has "TH 1844" inscribed on its north face. The Royal Commission on the Historical Monuments of England recorded the monument as a "three-sided tapering obelisk on a high plinth and with a pyramidal crown".

History
For centuries, Portland's position in the English Channel, with its treacherous coastline, has made it a major shipping hazard. Both Chesil Beach and Portland Bill in particular have been the location of many shipwrecks. The narrow promontory of Portland Bill is notably dangerous because of its shallow reefs and ledges such as the Portland Ledge, the Shambles sandbank to the south-east, and the Portland Race - a tidal race caused by the clashing of tides, and further exacerbated by the reduced depths over the Portland Ledge. In 1716, two lighthouses began operating as a pair to warn and guide shipping around the Bill.

In 1844, Trinity House erected an obelisk at Bill Point, the southern extremity of the Bill, to warn ships away from a low shelf of rock extending approximately 30 metres southwards into the sea and standing just above high water level. At the time, the present lighthouse, built in 1903-05, did not exist, making the obelisk an important addition to the area's navigational aids. It continued to serve for 143 years, but was considered redundant from 1987, following a review of navigational aids conducted by Trinity House.

English singer-songwriter Nik Kershaw's 1984 No. 3 UK hit single "The Riddle" featured a photograph of the obelisk on the vinyl's back sleeve, with Kershaw reading a map in front of the monument. The artwork for the album of the same name featured Kershaw on Chesil Beach, with the back sleeve photograph showing the western side of Portland in the background.

Today the obelisk primarily functions as a tourist attraction, while also being a popular viewpoint area overlooking the English Channel. For many years, a viewing platform was erected nearby, along with two coin-operated telescopes on either side of the obelisk.

Threatened demolition
By the 21st century, Trinity House had become concerned over the rising cost of maintaining the obelisk. As its foundations had suffered from erosion, it was feared that the obelisk would collapse into the sea within five years. Previously, the corporation had always covered the expense of minor repair and decoration work. Despite approaching Weymouth & Portland Borough Council and the Crown Estate, Trinity House failed to gain the required support and funding for the restoration and preservation of the monument. Initially, they had looked at the viability of having the obelisk relocated, or stabilising it with rock armour or concrete bags. It was estimated that moving the obelisk 50 feet inland would cost £47,000.

Due to the high costs and the lack of interest from other parties, Trinity House sought permission to demolish the obelisk, which was expected to cost a smaller sum of £12,500. The planning application was submitted in February 2002 and was quickly met with outcry from local residents and groups. Trinity House announced that they were prepared to offer the £12,500 figure as a contribution to the preservation of the monument on the condition that an appeal was launched. Although no such appeal was made, campaigners were successful in their fight to save the obelisk. Trinity House withdrew their proposed application later in February, following the negative reaction they received in letters, as well as articles appearing in the Dorset Echo.

Over the following months, no party approached Trinity House with financial assistance, who now expressed wish for the obelisk's ownership and responsibility to be handed over to a new owner. A public meeting, held at the Portland Heights Hotel in October 2002, discussed the long-term future of the obelisk. At the meeting, Portland mayor Ian Phelps agreed to approach Portland Town Council in relation to taking over its ownership and responsibility. The council scheduled a meeting for January 2003, while a proposal was made during pre-meeting talks, suggesting a combined contract between Trinity House and the council be made regarding general yearly maintenance. The Crown Estate expressed interest in contributing to the required funding once the question of ownership was resolved. Calls were also made for the consideration of a heritage lottery bid and public donations.

However, at the January 2003 meeting, Portland Town Council refused to take ownership of the monument, largely due to the funding issues surrounding it. Afterwards, it was decided that a heritage lottery bid would be jointly pursued by Trinity House and Weymouth and Portland Borough Council. It was announced in the Dorset Echo in May 2003 that Trinity House were in talks with English Heritage over the "technical aspects of relocation", while they also hoped to gain consent from the landowner, the Crown Estate. Discussions on the relocation project continued, but in December that year, the Dorset Echo revealed that a new report had concluded the obelisk was "in no imminent danger of collapse". Regardless, plans for relocation were still being actively pursued.

For a week in December 2003, inspection and repair of the obelisk had to be carried out by Trinity House after engineers discovered some dislodged stones at the top of the monument. Specialist investigation revealed that either lightning or salt water getting into the monument's joints was the most likely cause. The obelisk was then surrounded by scaffolding for further inspection and repair. Meanwhile, Trinity House continued to look at lottery funding, while also consulting with English Heritage about its relocation. However, as some local feedback was still negative over the idea of moving the obelisk, the idea was abandoned. To date, Trinity House continue to maintain the obelisk and also monitor the surrounding cliff. 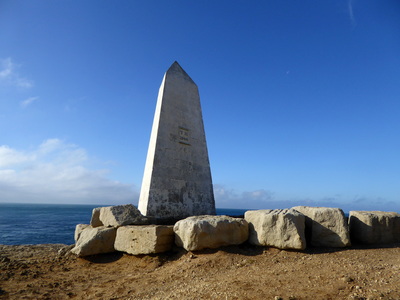 The obelisk is located at the southernmost end of Bill Point. 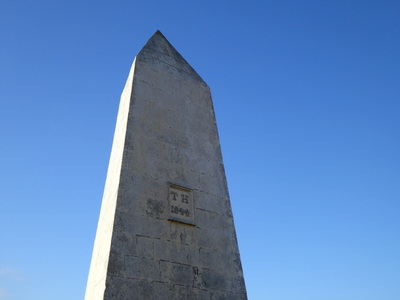 The north face of the obelisk. 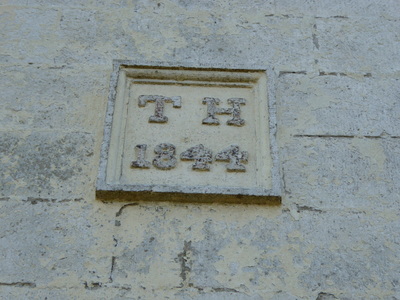 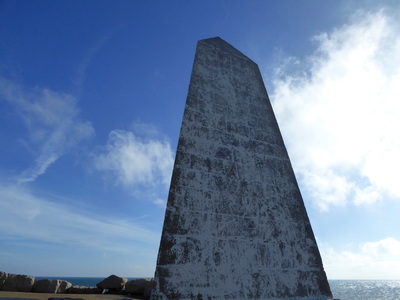 The south-west side of the obelisk. 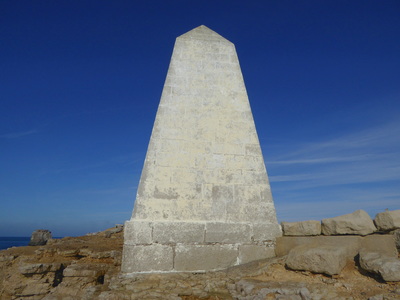 The south-east side of the obelisk. 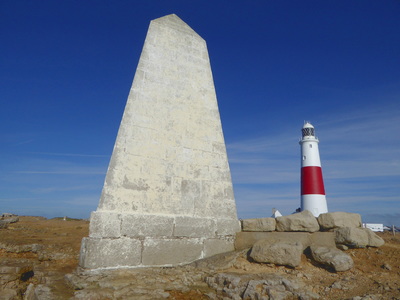 A similar photograph, including the nearby Portland Bill Lighthouse. 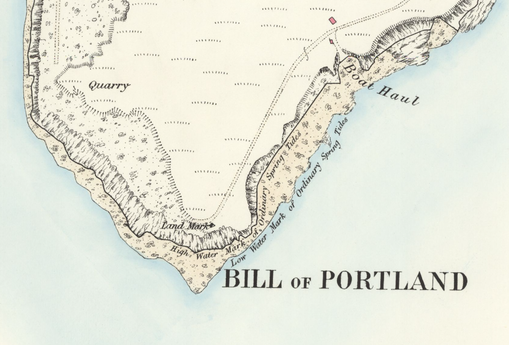 An extract from an Ordnance Survey map of Portland, surveyed in 1862 and published in 1875. The obelisk is labelled 'land mark' and the low shelf of rock running around the edge of the Bill is also shown. (Reused from mapping available at maps.nls.uk under CC BY-NC-SA 4.0).