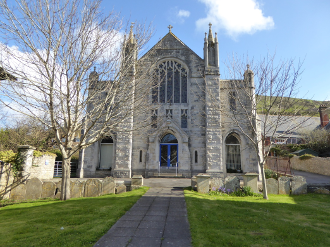 Underhill Methodist Church, also known as the Brackenbury Memorial Church, is a former Methodist church of late 19th century origin in Fortuneswell. It was built in 1898-99 as a Wesleyan Methodist church, replacing an earlier chapel of 1792 by Robert Carr Brackenbury, who founded the Methodist circuit on Portland. The church has a Perpendicular Gothic style and has been designated an Important Local Building in recent years. It was a part of the Dorset South & West Methodist Circuit until its closure in 2022.
​
History
Establishment of Methodism on Portland and Brackenbury's original chapel (1791-94)
Portland's original Methodist following was a small society of approximately twenty members, established in the mid-1740s through the efforts of the local quarryman William Nelson. The society was strengthened in 1746 when Rev. Charles Wesley stayed at Nelson's residence in Fortuneswell and began preaching and promoting Methodism across the island. Although the society dissolved after Nelson's death in 1770, the arrival of Methodist preacher Robert Carr Brackenbury to Portland in 1791 saw a new, larger following formed, with the assistance of George Smith. Having purchased a house in Fortuneswell, Brackenbury soon began preaching from his new residence. As attendance numbers soon surpassed the capacity of the house, he hired larger premises in the village and then formed plans to build a small chapel at his sole expense.

In April 1792, Brackenbury obtained a plot of land in the southern region of Fortuneswell and work then began on the chapel's construction, along with a minister's house. The chapel opened in January 1793, when it gained its preaching license from the Court of Blandford "for the public worship of God by a congregation of Dissenting Protestants called Methodists". Meanwhile, Brackenbury also began to focus on increasing Methodist numbers in Tophill. Initially he had hired a house in Wakeham for preaching in 1792, but decided to purchase a nearby house in the same hamlet in 1794. Although he returned back to Lincolnshire that year, both Brackenbury and his wife continued their association with the Portland circuit.

After Brackenbury's death in 1818, his wife had the chapel and house at Fortuneswell, along with the house at Wakeham, transferred to fourteen trustees of Portland's circuit the following year. Remaining a "friend and benefactress" to the island, Mrs Brackenbury paid for the construction of Tophill's first purpose-built chapel at Wakeham in 1825. She also established a Wesleyan Day School in Fortuneswell, near Brackenbury's chapel, in 1845. The school later became an infant school in 1936 and finally closed in 1991 with the opening of the new Brackenbury Infant School. The former school was home to the community-based Brackenbury Centre from 2011 to 2019.

Construction of Underhill Methodist Church (1898–1899)
As the 19th century progressed, Portland's Methodist following continued to increase as the island's population grew. In particular, the mid-19th century transformation of Portland Roads into a harbour of refuge, along with the various government works linked to it and the Royal Navy's increasing presence at Portland, resulted in large increases to Portland's population and its Methodist circuit. While a new chapel was opened at Easton in 1855 to serve Tophill, Brackenbury's chapel at Fortuneswell soon became too small to meet the requirements of Portland's circuit.

Despite undergoing modernisation and alteration in 1864, the Wesleyan trustees considered the chapel was no longer adequate as a place of worship towards the end of the 19th century. In 1896, they made the decision to build a £2,500-£3,000 replacement near or on the same site. Ultimately, the Minister's House, behind the Brackenbury chapel, would be demolished to make way for the replacement, thus allowing the original chapel to continue serving its worshippers until the new one could be completed.

The plans for the replacement church were drawn up by the architect Mr. Robert Curwen of London and construction commenced on 30 May 1898 with the laying of twenty-six foundation stones during a well-attended ceremony. Present was Lieutenant Molyneux of HMS Boscawen on behalf of the Royal Navy and Captain Sant of the 5th Fusiliers (stationed at the Verne Citadel) on behalf of the British Army. Following the ceremony, a public tea was held in the Wesleyan schoolroom, along with an evening meeting in the old chapel. By the time of the ceremony, approximately £2,500 had been raised towards the cost of the new church.

The church, able to accommodate 732 worshippers, was built by the local builder Mr John Patten and cost £3,264. Work progressed well throughout the year, with the Southern Times commenting in December: "Judging from the exterior, [the chapel] bids fair to be one of the finest specimens of ecclesiastical architecture in the Island". Completed in 1899, it was declared open that year for Divine Service on Whit Monday (22 May), with opening services continuing into June.

The final services held in the 1792 chapel were carried out on 3 June 1900 and conducted by Rev. W. Nicholson of Weymouth and Rev. Chas Winters. The chapel went on to be used by the Sunday school from May 1901 and was demolished in 1903 to make way for a new manse, known as Brackenbury House. In 1902, a new organ was installed in the church, which replaced a small American organ that was deemed ineffective during services. The new organ was built by Messrs. D. P. Conacher & Co of Huddersfield at a cost of £450 and was formally opened during an evening recital on 19 November.

Underhill Methodist Church has undergone a number of repairs and restorations over the years. During the 1930s, repairs and redecoration work was carried out, and the interior underwent modernisation in the early 1970s. Renovations in the late 1990s aimed to "amplify [the] beauty and openness" of the church. In its final years as a place of worship, the church formed part of the Dorset South & West Methodist Circuit, which was established in September 2018 with the merging of the Portland, Weymouth, Dorchester and Bridport circuits. It was also used as a community venue, hosting a range of events from gigs to local art exhibitions. The church held its final service on 3 April 2022, leaving Easton Methodist Church as the last active Methodist place of worship on the island.

Design
The church is built of Portland stone in the Perpendicular Gothic style. The facade has tracery windows and a central gable, flanked by two large ornamental pinnacles, with two smaller ones at the corners. The church was originally designed with three recessed entrances, but the flanking ones have since been converted into windows. The side elevations of the building are divided into bays by buttresses and Gothic-headed windows. A classroom and vestry was constructed at the rear of the church.

In 1900, the Southern Times described the church as the "handsomest building in the Island", noting the "commanding and attractive" exterior and "spacious and well arranged" interior. 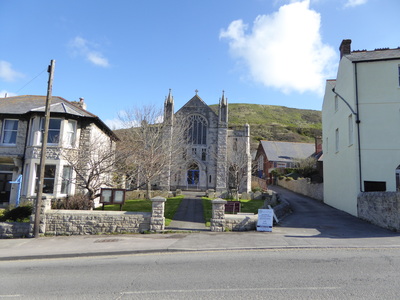 The church is situated at the top of Fortuneswell. The building in the background on the right is the former Brackenbury School. 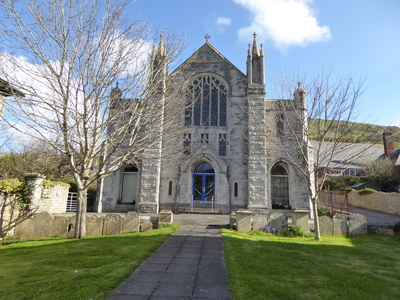 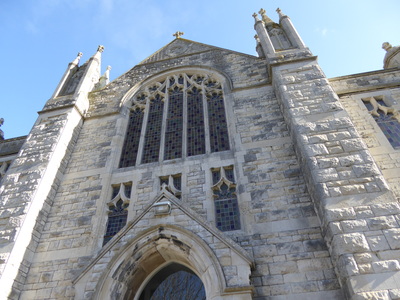 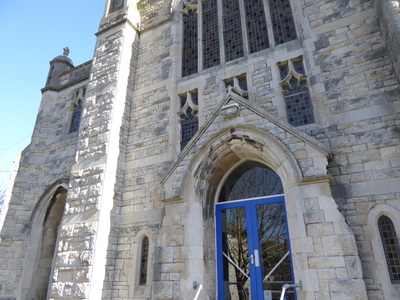 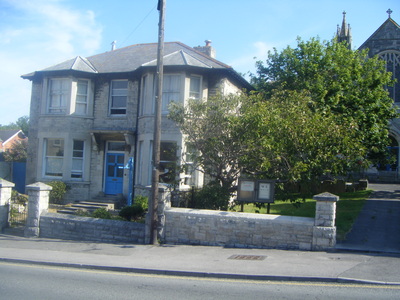 To the left of the church is Brackenbury House. 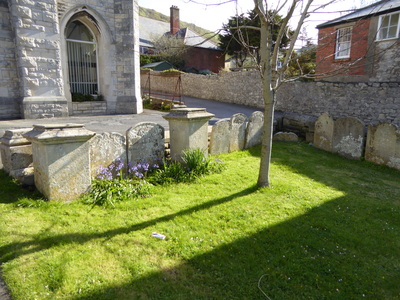 Within the front grounds are a number of headstones. 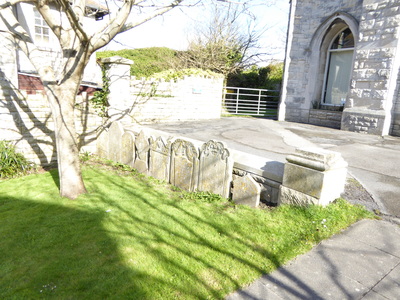 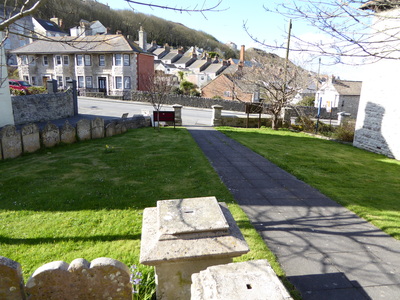 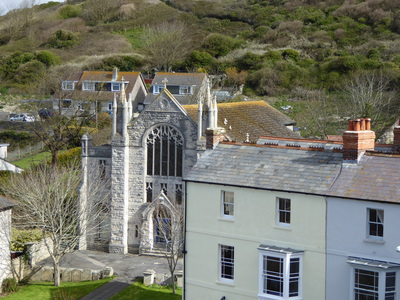 The church as seen from the roof of the Portland Town Council Offices. 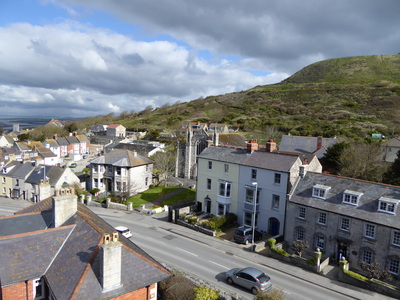 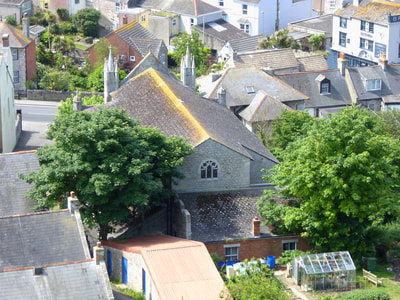 The back of the church as seen from Verne Hill. 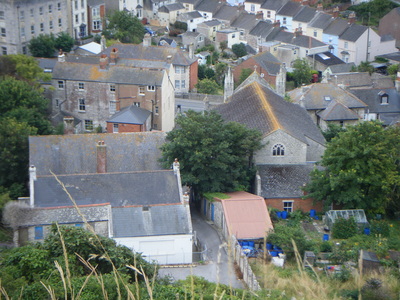 The rear end of the church and the old school from Verne Hill. 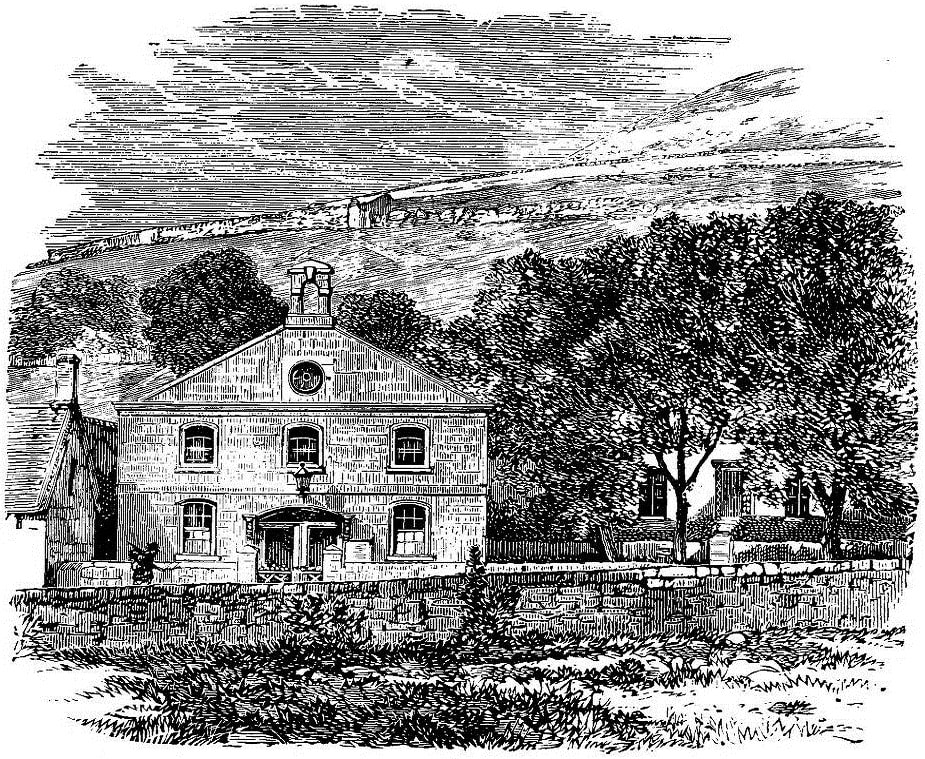 The original Methodist chapel built by Robert Carr Brackenbury in 1792, with the Minister's House to the right. This engraving was featured in the 1898 book Methodism in Portland by Robert Pearce.