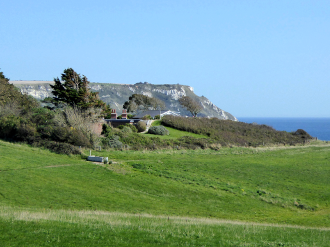 Upton Battery, also known as Upton Fort, is a former battery of early 20th century origin on the outskirts of Weymouth, east of Osmington Mills and north-east of Portland Harbour, which it was built to protect. The battery was constructed in 1901-03 and decommissioned in 1956. Today it is privately owned with many of the original buildings being used as residences.

Much of the surviving battery became a scheduled monument in July 2009 and remains protected under the Ancient Monuments and Archaeological Areas Act 1979. In addition, the battery's western group of buildings are Grade II listed. In recent years, the battery has been included on Historic England's "Heritage at Risk" register. The site's condition is described as "declining" and "generally unsatisfactory", with the main vulnerability being collapse.

History
Upton Battery was constructed as one of the later coastal defences for Portland Harbour and was built shortly after the new Blacknor Battery on the west side of Portland. By the late 19th century, Portland Harbour had become an increasingly important station and refuge for the Royal Navy, and work to completely enclose the harbour with two northern breakwater arms was undertaken between 1895 and 1905 as an anti-torpedo measure. Plans for two new batteries, Upton and Blacknor, were approved during this period, alongside modernisation work of existing defences such as East Weare Batteries.

The chosen site for Upton Battery was to the east of Osmington Mills, where an existing group of dwellings already existed. Negotiations for the land began in November 1899 and the purchase was completed in June 1900. The battery was to be armed with breech-loading (BL) guns for the protection of the eastern approaches to the harbour. As part of the wider modernisation scheme carried out during the period, BL guns would also be installed at East Weare in 1901, the Nothe Fort in 1903 and the Breakwater Fort in 1909.

The local builders Messrs Jesty and Baker constructed Upton Battery between June 1901 and September 1903 for a cost of £20,612. To make way for the new coastal defence, a two-storey residence known as Upton House and an adjacent building was demolished. However, the residence now known as Brant Cottage was retained and incorporated into the battery to serve as a canteen and stores.

The original armament was made up of two 6-inch BL Mark VII guns in the western emplacements and two 9.2-inch BL Mark X guns in the eastern ones. The first 6-inch gun arrived at Wool Station in December 1902 and was placed on a four-wheeled dray by Royal Artillery personnel to be taken to the battery by two traction engines. A series of delays were met in the transportation of the gun as the sheer weight of it had caused damage to the roads, while at Knighton Knap it had to be freed from soft ground. Both of the 6-inch guns had been installed by February 1903, with the 9.2-inch ones following later in the summer.

Behind the four gun emplacements and their associated magazines was the battery command post. Other facilities constructed at the battery included a shelter, stores, workshops, telephone room, cookhouse, ablutions, toilets and a caretaker's quarters. A position finding cell (with attached blockhouse) was built to the south-west of the battery. The 6-inch guns saw short service at Upton; the first was removed in 1908 and installed at the Nothe Fort, and the second was removed in 1910. During World War I, the 9.2-inch guns were bolstered by three Maxim guns. A new battery command post and telephone room was completed in 1915.

Following World War I, the 9.2-inch guns were removed during the 1920s, leaving the battery unarmed and reduced to care and maintenance. During the 1930s, private dwellings were established at the battery. A wooden residence was constructed over the westernmost 6-inch emplacement (now known as No 3), while two others were established within the battery's former shelter and cookhouse (Nos 4 and 5). Little Brant Cottage was also built in the northern region of the battery during this period as an annexe to Brant Cottage, which had returned to residential use by this time.

The battery returned to full operational use for World War II when the former 9.2-inch gun emplacements were modified in March-June 1941 to take two 6-inch BL Mark XVI guns, which were installed there in May and had once been fitted on the battleship HMS Erin. Aside from the two main guns, the battery had additional defences and weaponry including a QF 4.5-inch howitzer, 40mm Bofors gun, anti-personnel mines, spigot mortars and machine guns. On the sloping hillside to the south, overlooking Weymouth Bay, two searchlight emplacements and a machine gun post were constructed.

Designated 134 Battery, the battery was manned by the 522 Dorsetshire Coastal Regiment, who were accommodated in Nissen huts erected within the northern region of the site. All of the original buildings at the battery were brought back into use, with some being given new roles. The caretaker's quarters became an officers' and sergeants' mess, the former artillery store became the cookhouse and the 6-inch gun magazine saw use as a passive air defence store, engine room and drying room. Meanwhile, the existing private dwellings (Nos 3-5) were requisitioned, but returned to their original owners after the war.

The battery was placed under care and maintenance in November 1943 and the two 6-inch guns later removed in November 1952. As with many batteries and military defence installations of its type across the UK, Upton Battery was decommissioned in 1956. Following its release from the military, the former caretaker's quarters was converted into private dwellings during the 1950s and they remain known as Nos 1 and 2. In 1978, the battery's position finding cell was destroyed by the Army.

Scheduled monument status
Upton Battery became a scheduled monument in 2009, with Historic England noting the battery was in a "good state of preservation" with some "rare survivals", while also continuing to maintain "strong group value" with the other defences and fortifications in the area. The battery was also considered for its rarity with the organisation recording: "This coastal artillery battery has been identified as one of only ten examples of its type which have survived largely intact (from a recorded total of 202 built in the 20th century) in England." In addition to the original gun emplacements, other surviving inclusions are the two World War II searchlight emplacements, a machine gun post, and a base for the 40mm Bofors gun.

In addition the battery's scheduled status, the group of buildings within the western region of the battery also became Grade II listed at the same time. They are made up of the former caretakers' quarters, artillery store, smith's and fitter's shops and a small building used in World War II as a generator room. They are considered by Historic England to be "rare survivals" and "little-altered" since their construction in the 1900s while also representing "significant components" to the scheduled features of the battery.

Some excellent photographs of the battery can be seen on the 28dayslater forum here and on the Urban Explorer website here. 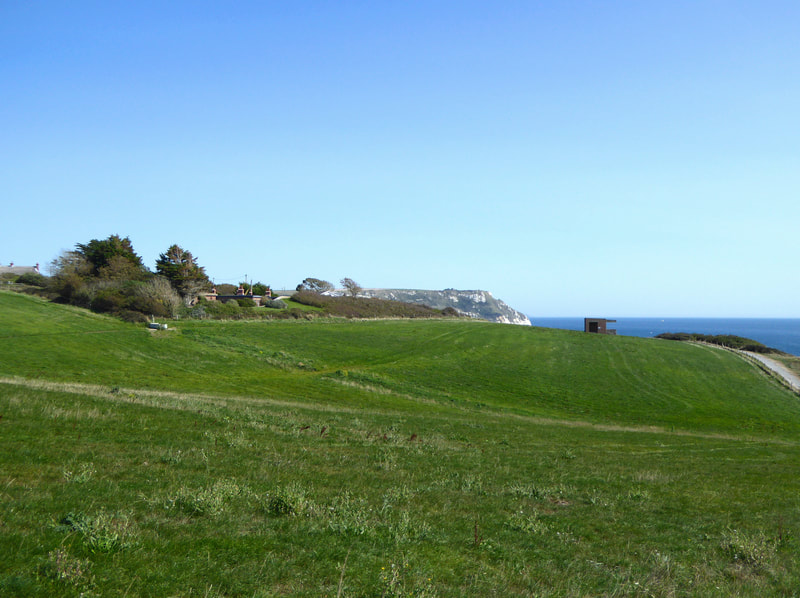 The view towards Upton Battery from the west. On the right is one of the two World War II searchlight emplacements south of the battery. 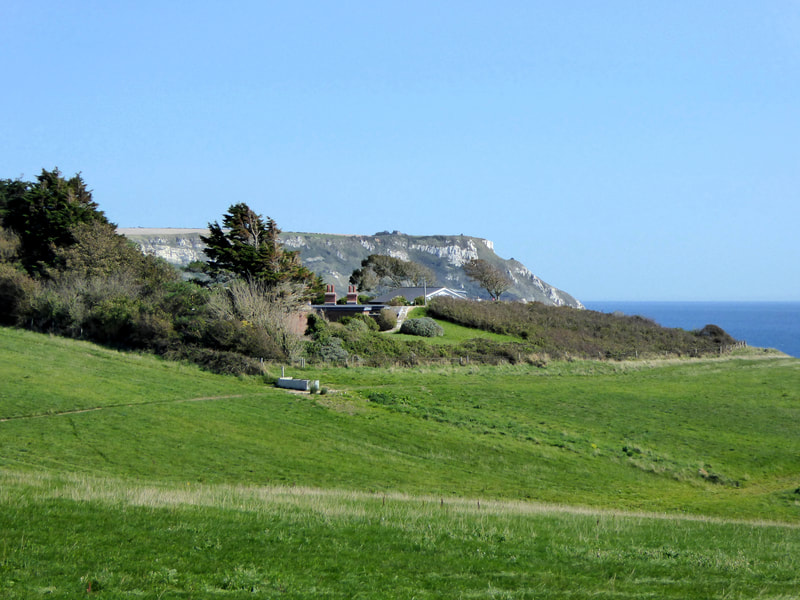 The emplacements are concealed, but part of the western group of original buildings can be seen. Left is the former artillery store and right is the roof of Nos 1 and 2 (the former caretaker's quarters). 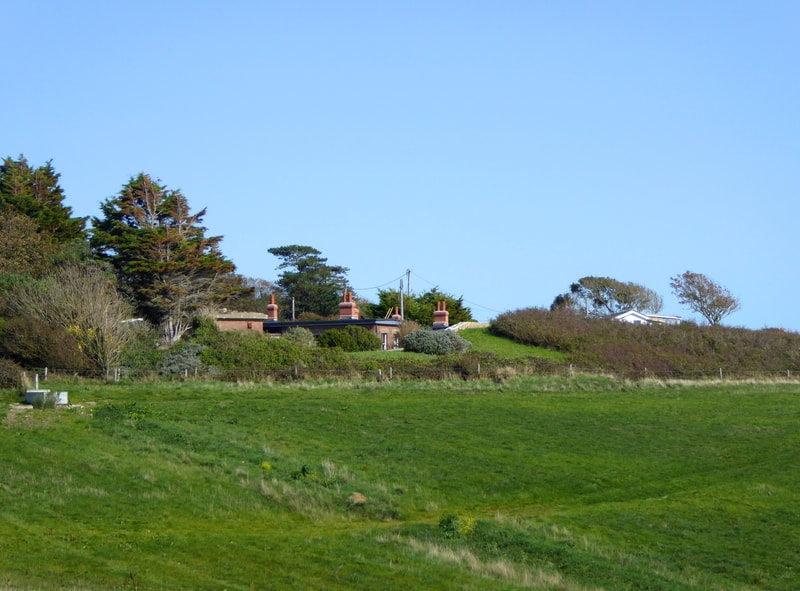 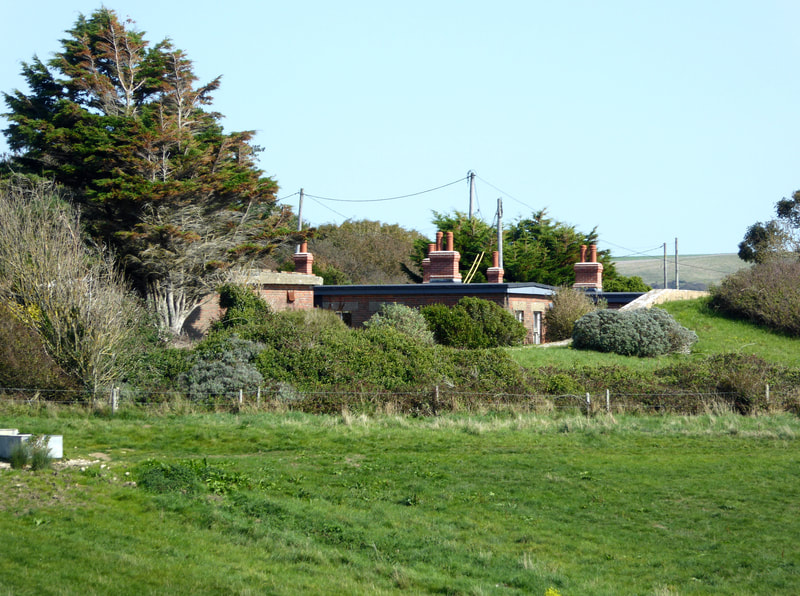 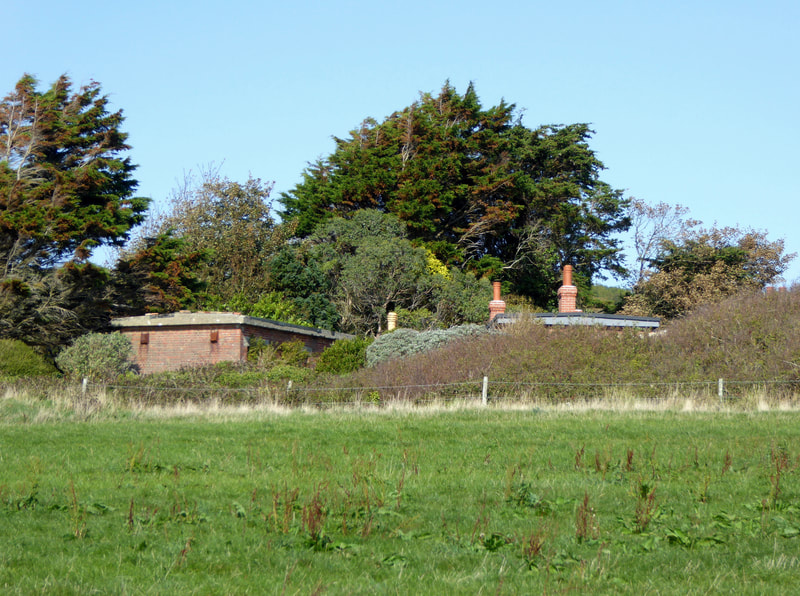 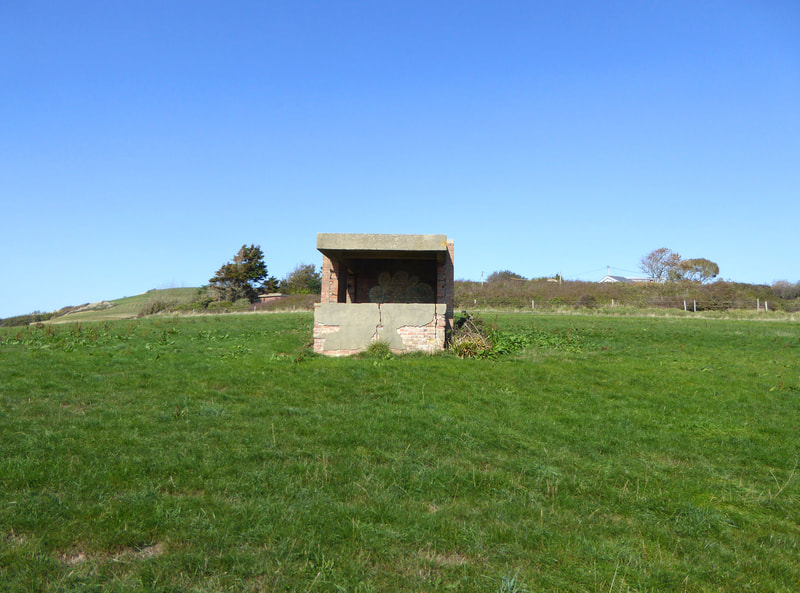 One of the searchlight emplacements built on the hillside in front of the battery during World War II. 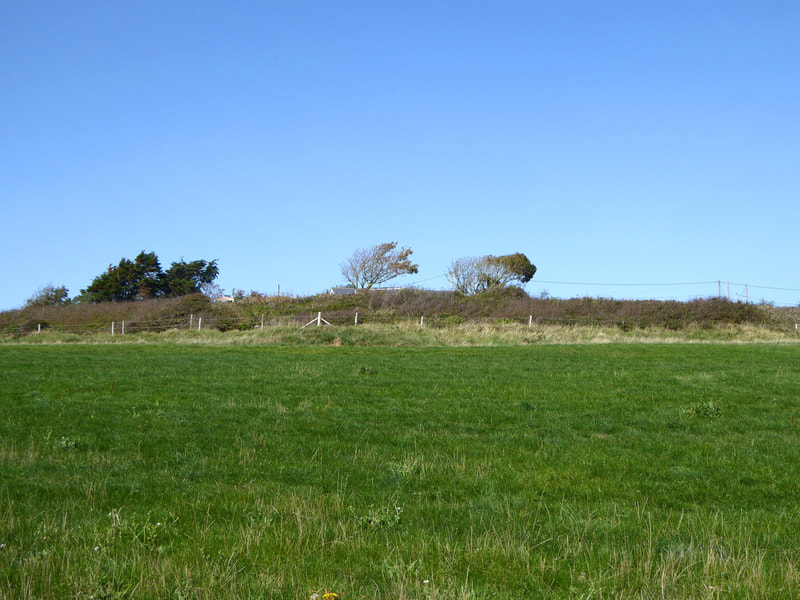 Looking towards the battery from the south. 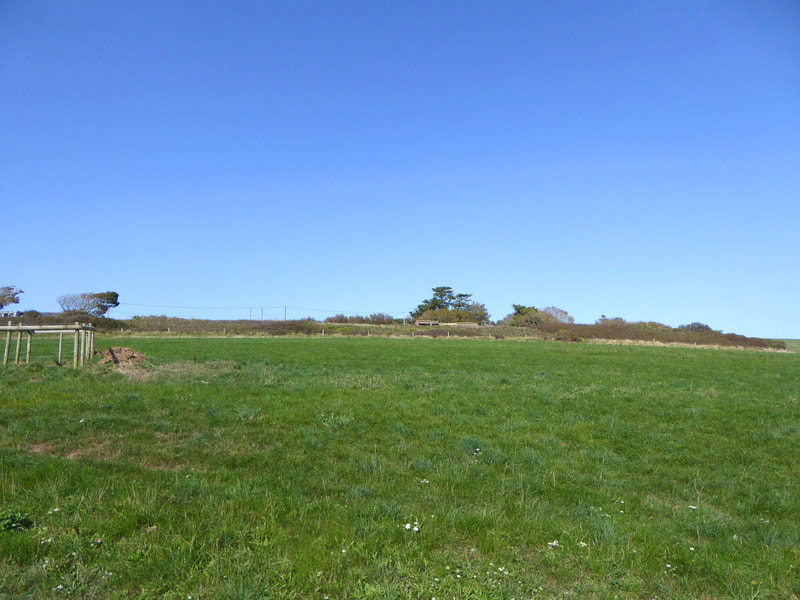 The roof covering of one of the battery's emplacements can be seen here. The emplacement was originally designed for a 9.2-inch BL gun but was modified in World War II to accommodate a 6-inch BL Mark XVI gun. 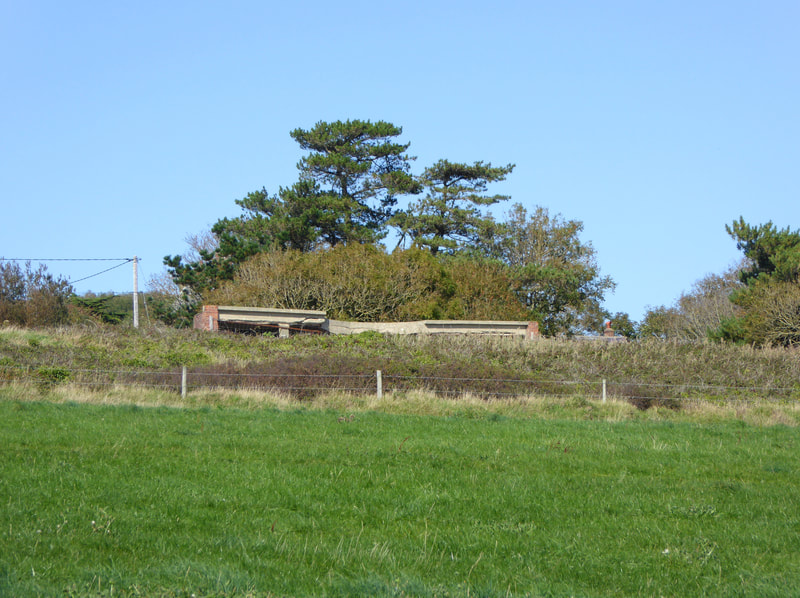 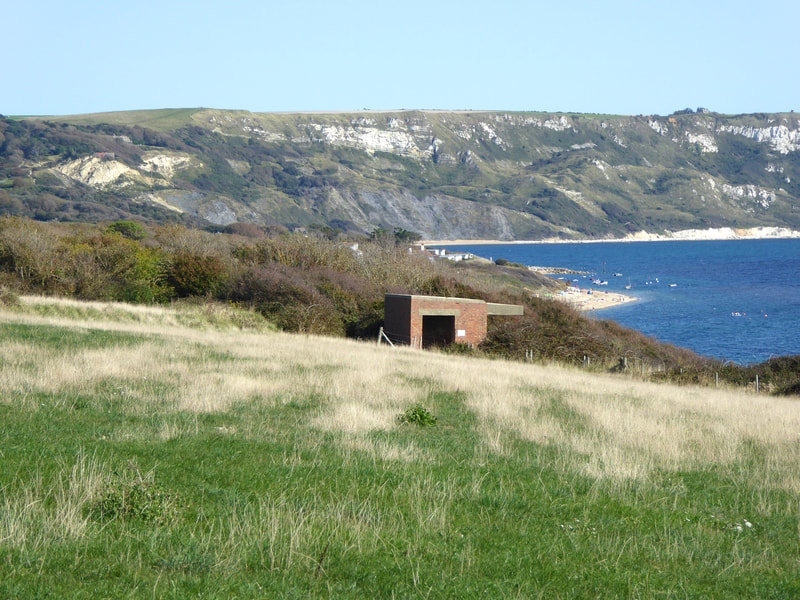 The second searchlight emplacement is located to the south-east of the battery. 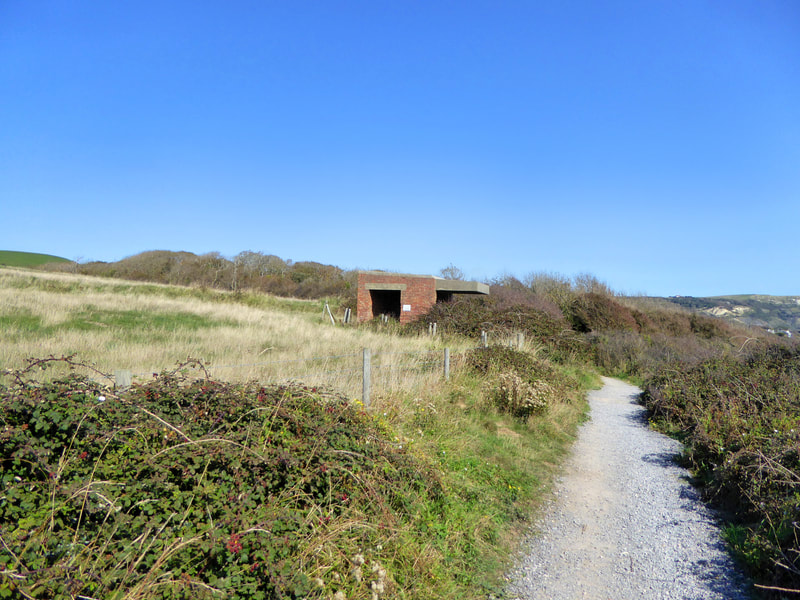 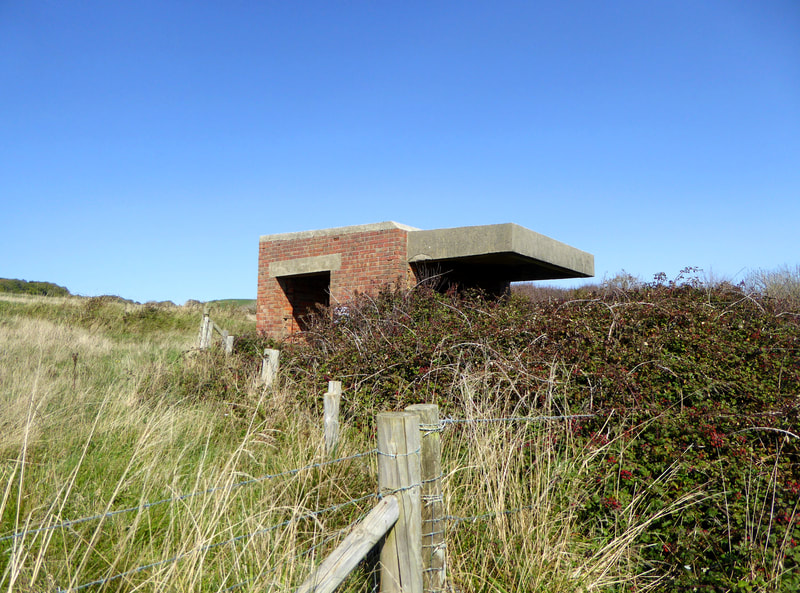 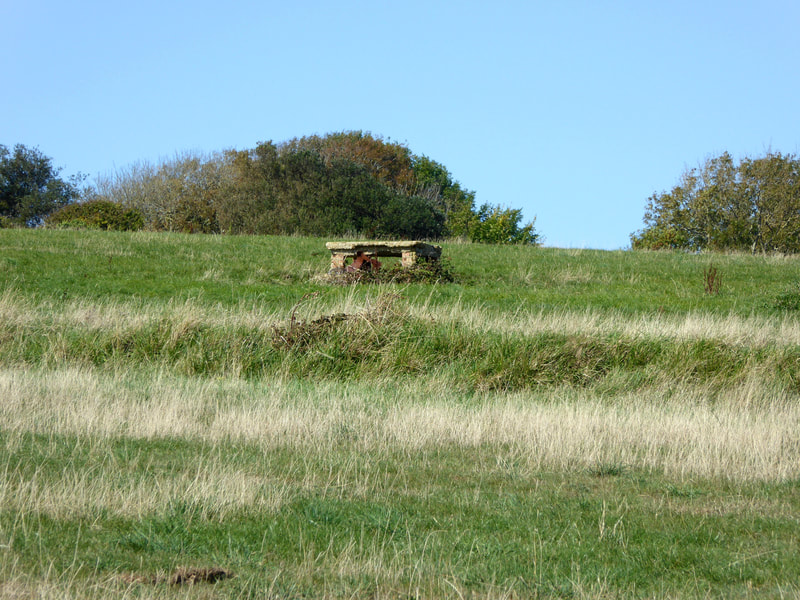 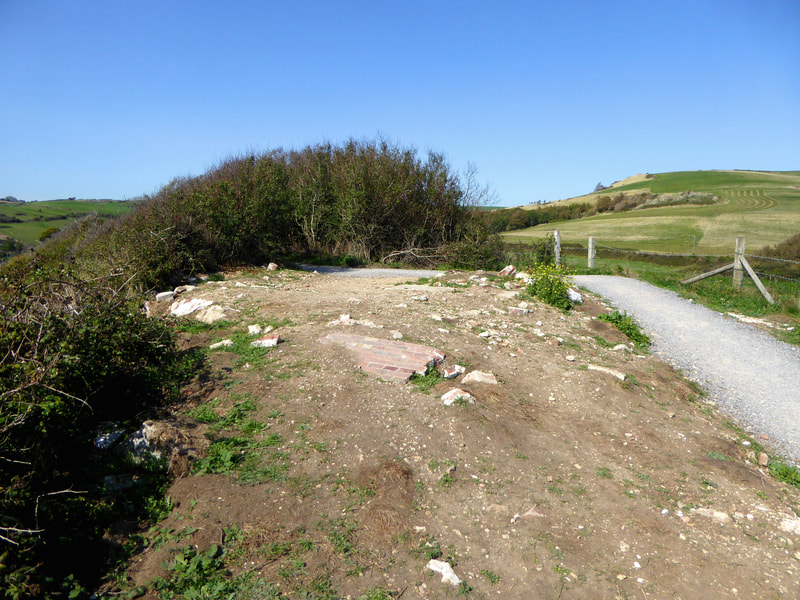 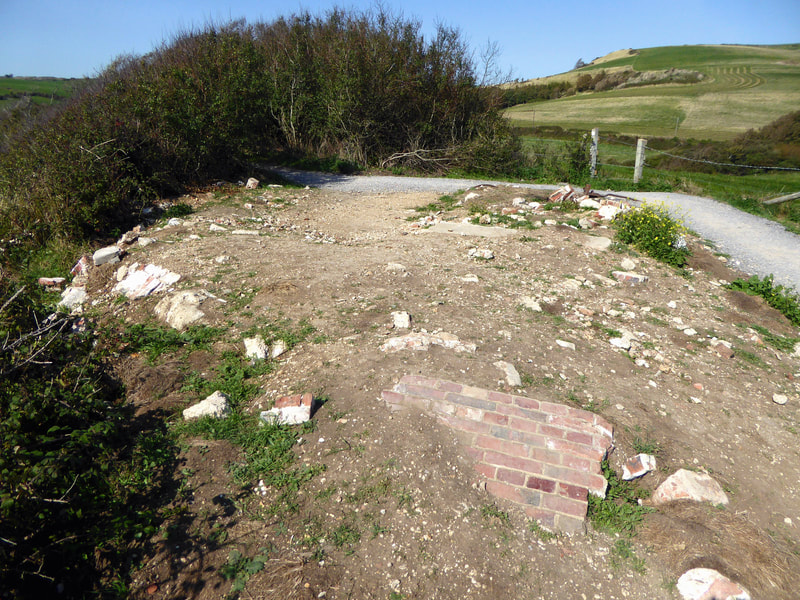 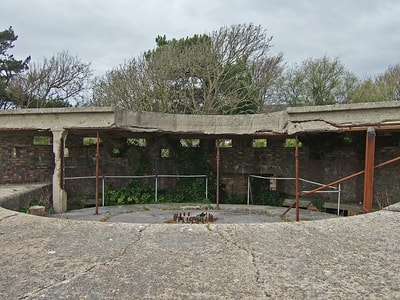 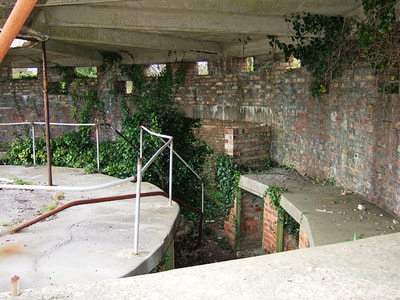 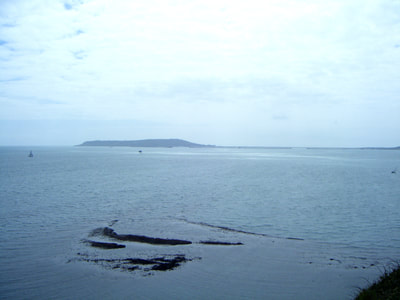 A view from the coastal path below Upton Battery across to Portland; the fort provided long-range cover across Weymouth Bay. 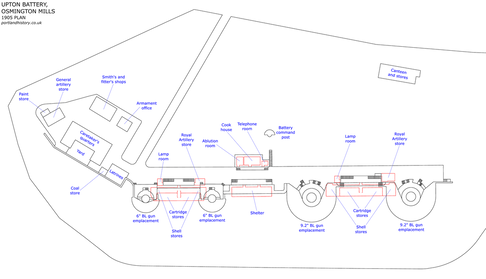