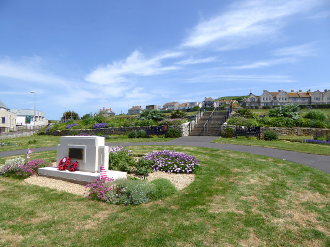 Victoria Gardens is a public garden of early 20th century origin in Underhill, on land between Fortuneswell and Chiswell. The gardens, along with Tophill's Easton Gardens, were created to mark the 1897 Diamond Jubilee of Queen Victoria, although a series of delays and setbacks in their creation postponed their opening until 1904.

History
In 1896, Councillor B. Comben proposed the creation of two public gardens, one at Underhill and the other Tophill, to the Portland Urban District Council (PUDC) to celebrate the 1897 Diamond Jubilee of Queen Victoria. A committee was quickly formed to consider the scheme and the open sloping land known as Little Common was selected as the site for Underhill's Victoria Gardens. An application was then submitted in October 1896 to the Commissioners of Woods and Forests, along with the Court Leet, for approval of the site's transformation. PUDC surveyor Mr. E. J. Elford's plans for Victoria Gardens were developed in 1897 and approved by the PUDC that October. However, the project suffered a setback by the beginning of 1898 after the committee felt that the Commissioners of Woods and Forests' draft terms for the grant of the land was not viable.

Both garden schemes were postponed further while the local authorities commenced work on a piped water supply and new drainage scheme for the island. In 1899, with the passing of the Commons Act, the council began pursuing the scheme for Victoria Gardens again, with Councillor B. Comben becoming chairman of the Pleasure Gardens Committee in October 1900. Under the Commons Act, the council were able to submit their proposals to the Board of Agriculture rather than the Commissioners of Woods and Forests. A new proposal for Victoria Gardens was drawn up by Mr. Elford by April 1901 and approved by the Board on 21 December that year. The sum of £1,800 was borrowed for the scheme from the local Ferry Bridge Fund, which was to be paid back over 40 half yearly installments.

Once funding was secured, Mr Stewart of Bournemouth was approached for advice on the undertaking of the Victoria Gardens project and his suggestions approved in September 1902. Messrs Stewart & Sons then received the contract to supply and plant 6,322 selected shrubs for £243 and Messrs Jesty and Baker of Portland were contracted in November to lay out the gardens for £1,447 under the supervision of Mr. R. Henshaw, the succeeding surveyor of the PUDC. Work then began on the transformation of Little Common, which included the construction of a large plateau at the base of two slopes. Notable features within the new gardens included a glass shelter (now the bowling pavilion) and a bandstand, the latter being constructed by Messrs Hill & Smith of Brierley Hill.

The PUDC's official opening of the gardens was originally set for 24 May 1904, but adverse weather conditions led to the opening being postponed until the following day. The gardens were declared open in the afternoon by Mr. Henry Sansom, Chairman of the PUDC, who received the key of the gates from Councillor B. Comben. In the presence of thousands of local residents and visitors, Mr. Sansom commented: "It has been my happy lot on many occasions to perform public duties in the island of Portland, but I can sincerely assure you that on no occasion has it given me greater pleasure than it does now at the opening ceremony of these delightful gardens."

Entertainment was provided by the Portland Town Band, who performed their first piece, the National Anthem, when the gates were first opened. A public luncheon was held later in the evening at the Masonic Hall to celebrate the occasion, which saw Mr C. H. Collins of Dartmouth and Portland donating £100 towards a shelter for the gardens. The opening ceremony continued into the evening and concluded with dancing until 10pm. The new gardens were met with much praise, with one account describing them as "admirably designed and laid out with considerable ingenuity and artistic taste". The Southern Times said in their report on the opening ceremony: "The large green spaces covered plentifully with grass afford a delightful contrast to the beach and sea, and the shelter and bandstand stand up in the midst of the grass and flowers and enhance the beauty of the scene."

The overall scheme for Victoria Gardens amounted to £2,339, which included £217 for the bandstand, £154 for lamps, £159 for footpaths and £45 for seats. Later in 1904, plans to incorporate tennis and croquet areas were made, while the shelter proposed at the luncheon was added in 1905, along with a ladies lavatory, both of which were built by Messrs Jesty and Baker for a cost of £209.

The original gates of the gardens' main, lower entrance at Victoria Square were replaced in 1953 with a new set made by inmates of HM Prison The Verne to commemorate the coronation of Queen Elizabeth II. These were later removed for refurbishment, but not replaced owing to significant rusting. The gardens' bandstand was removed in the 1960s.

During 2014-15, a set of improvements were made to the gardens, funded by the South West Regional Development Agency and the Court Leet. Weymouth and Portland Borough Council worked alongside the Friends of Victoria Gardens to provide new play park equipment, seating, and a new lower gateway with a Victorian-styled design. The gateway was completed in 2015, with the pillars created by Portland Stone Ltd, and the gates and arch by Hyde Fabrications. It received a commendation that year from the Weymouth Civic Society.

D-Day Memorial
In 1944, Portland and Weymouth Harbours were commissioned as USNAAB Portland-Weymouth as part of preparations for the Normandy landings. The two harbours were major embarkation points for American troops of the US 1st Division destined for "Omaha Beach". After the end of World War II in Europe, Portland's role in the landings was commemorated with a ceremony on 22 August 1945, when American Ambassador John D. Winant unveiled a commemorative stone in Victoria Gardens. He had travelled by plane from London to Warmwell and completed his journey to Portland by car for the event. The stone memorial, locally known as the American Stone, features a bronze plaque honouring the Americans who took part. The same day saw Winant unveil a new road sign for the renaming of Cadets Road, running around the edge of the gardens, to Victory Road. The change of name was the idea of the PUDC Councillor Mr. W. J. Baker.

The memorial's plaque reads: "The major part of the American Assault Force which landed on the shores of France on 'D' Day, 6 June 1944, was launched from Portland Harbor. From 6 June 1944 to 7 May 1945, 418,585 troops and 144,093 vehicles were embarked from this harbor. This plaque marks the route which the vehicles and troops took on their way to the points of embarkation. Presented by the 14th major port, U.S. Army." It is signed Harold G. Miller, Major, T.C., Sub Port Commander, and Sherman L Kibor, Colonel, T.C., Port Commander.

The memorial underwent restoration during March-April 2008, following calls made by the Portland Community Partnership for the Portland Cenotaph to be restored. With the work on the cenotaph to be largely funded by Weymouth & Portland Borough Council, the Court Leet agreed to fully fund the D-Day Memorial, allowing both memorials to be restored at the same time. The work on both monuments was carried out by Humphries and Jones Ltd of Crewkerne, with the D-Day Memorial being given a thorough cleaning, including the removal of copper stains on the bronze panel.

Mortuary
In the northern corner of the gardens is a former mortuary (with adjacent public latrines), built for Portland Urban District Council in 1923 and in use until 1955. The mortuary provided an "urgently needed" facility on the island, one which had been called for since at least the 1900s. In the annual report on the health and sanitary condition of the island for 1925, Dr. Thomas Howard, the medical officer of health, reported that the mortuary's "usefulness has been amply demonstrated since its erection".

Prior to the mortuary, the same site was used for the construction of a water tank in 1867. Part of the tank's stone wall was incorporated into the new building. The red brick section contains the latrines, which have been closed since the 2000s. Although Easton Gardens has been awarded the Green Flag Award in recent years, Victoria Gardens has not, which is most likely due to the lack of toilet facilities.

Features
Victoria Gardens is largely made up of grassed and formal bedding areas, with a large rockery running across the centre, planted with a mixture of shrubs, perennials and bedding plants. In the centre of the gardens, a tennis court was established (which remains open to the public to date), along with a bowling green. Bowls was introduced to Victoria Gardens in 1905 and the Portland Victoria Bowls Club, who continue to manage and use the green, were established in 1911. The central shelter was converted into a bowls pavilion in the 1970s. A children's play area was established on the upper tier of the gardens in the late 20th century, which resulted in the demolition of the 1905 shelter.

Friends of Victoria Gardens
The Friends of Victoria Gardens was established in May 2008 with the support of Weymouth and Portland Borough Council. The group remains responsible for the gardens and their daily management. Their aim is to work closely with the Council's Parks Section to make improvements to the gardens for benefit of the community and future generations.

Since their establishment, the Friends have received a number of grants and funding for improvements to the gardens. One of the most notable is a £3,875 grant from Comma Funds to create a wooded area on a redundant plot of land next to the gardens. Snowdrop bulbs were planted to create the woodland with the help of the Chesil Cove Juniors. Once the trees have grown, a path through the woodland will be laid so that it can be opened up to the public. Part of the £700 raised for the Friends in 2011 by a Rotary Community 2000 table top sale was for the renewal of the gardens' railings in original Victorian-style wrought iron. 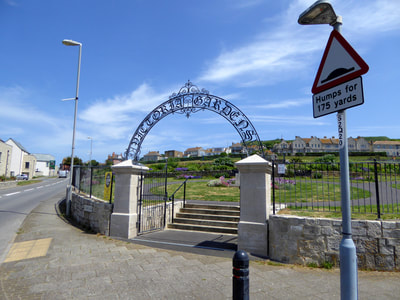 The lower entrance to Victoria Gardens, off Victoria Square. 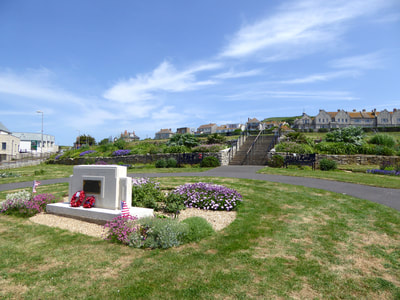 The bottom of the gardens features the American D-Day memorial. 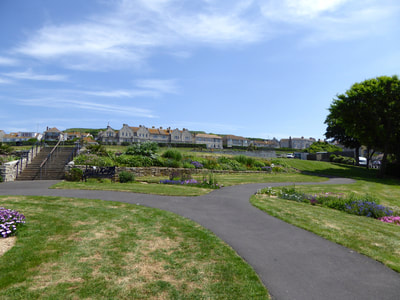 A view across the higher tiers of the gardens from the bottom. 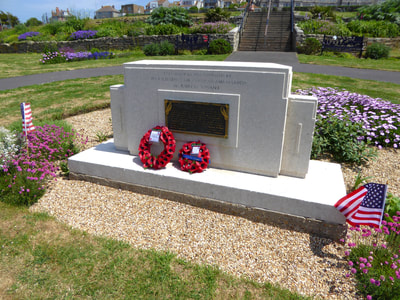 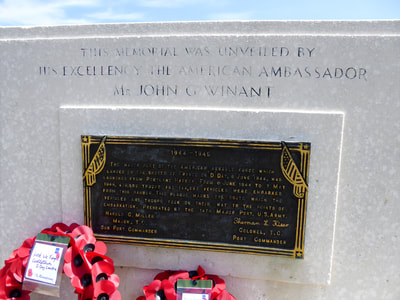 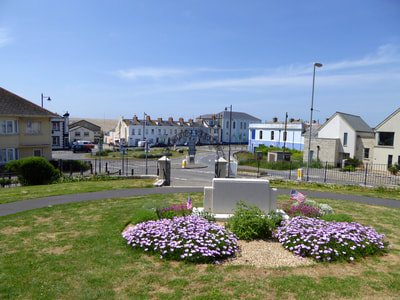 Looking across Victoria Square from the gardens. 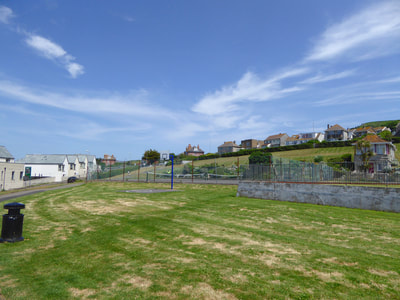 Looking over at the gardens' tennis courts, with Victory Road on the left. 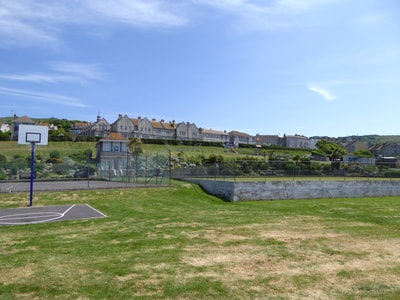 Overlooking the courts and bowling green to the upper tier of the gardens. 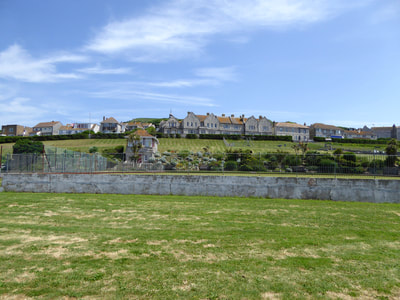 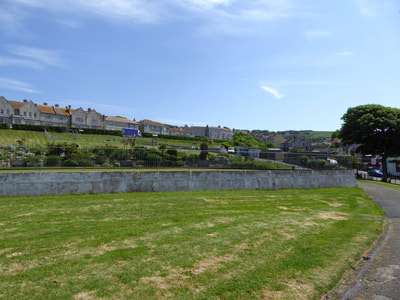 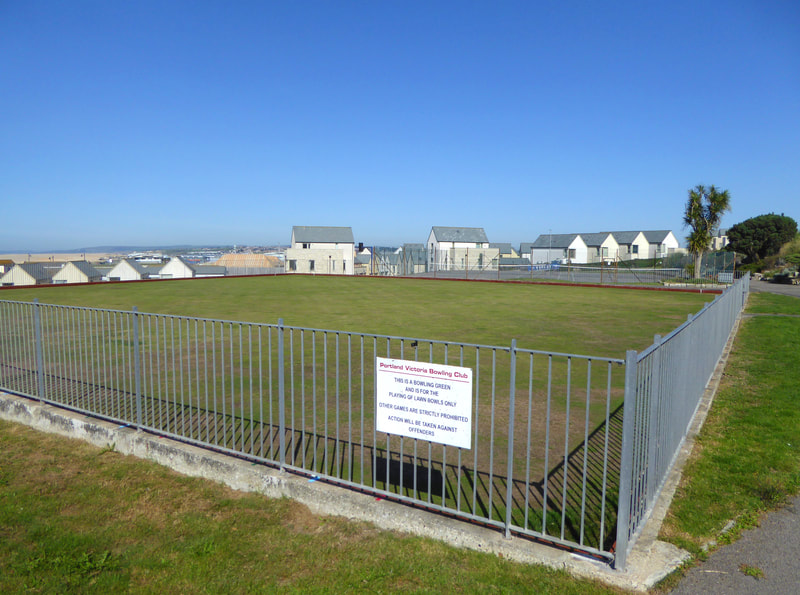 Looking over the bowling green from the garden's middle tier. 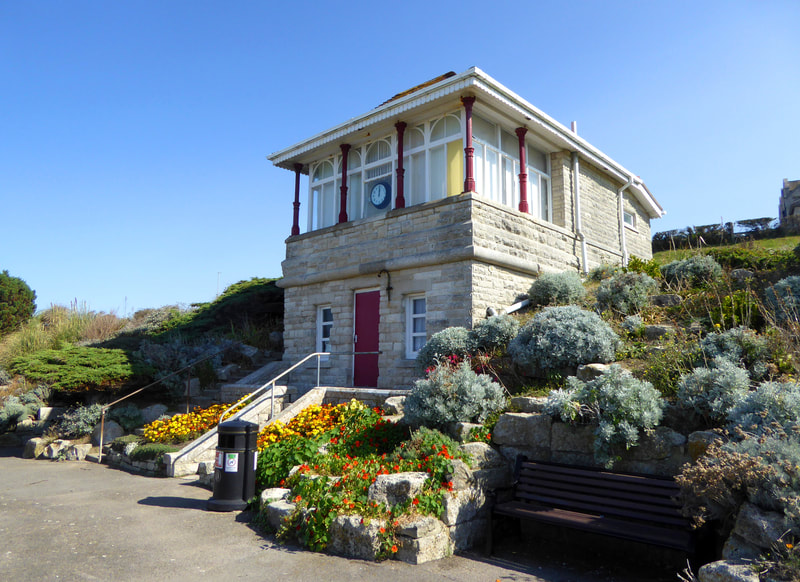 The glass shelter built as part of the original garden layout. It is now the bowling pavilion. 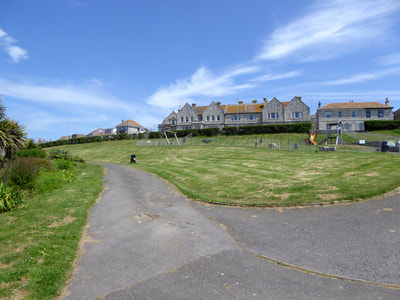 The upper tier of the gardens, featuring the children's play area. 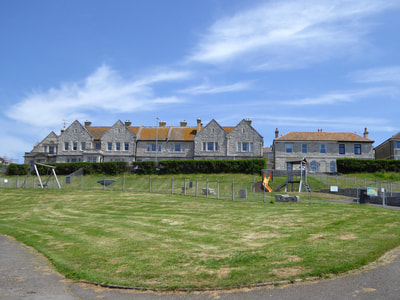 Above the play area, overlooking the gardens, is Portland's former police station at Castle Road. 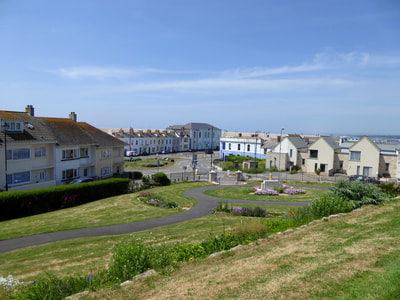 The view from the upper region of the gardens down to Victoria Square. 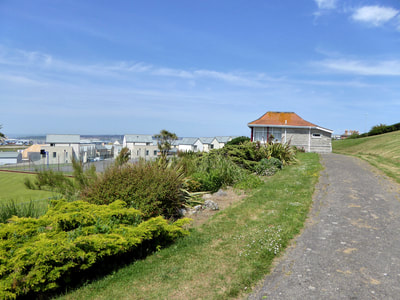 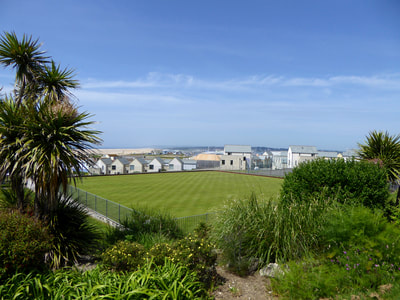 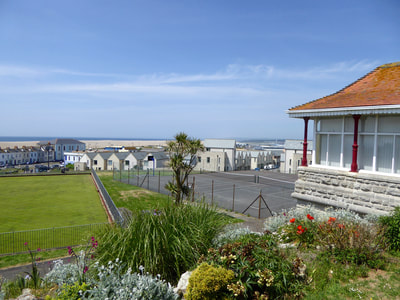 Overlooking the middle region of the gardens, with the pavilion on the right. 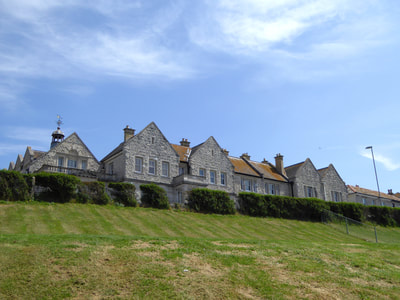 The former police station seen from the gardens. 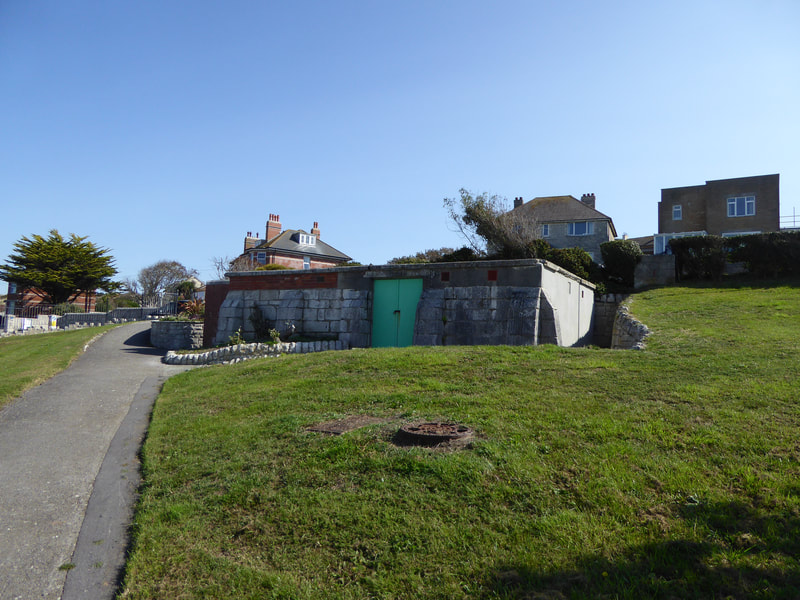 The northern corner of the gardens contains the former mortuary and public latrines. 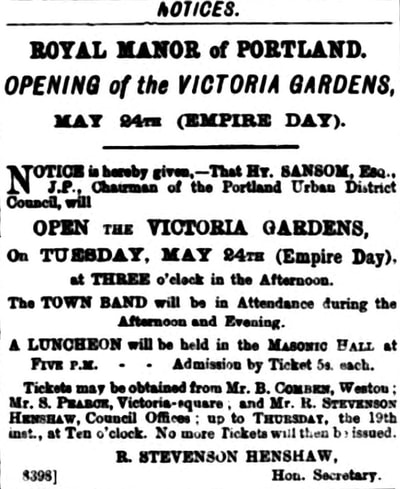 An advert promoting the opening of the gardens from a May 1904 issue of the Southern Times and Dorset County Herald. The proposed date was postponed until the following day due to adverse weather conditions. 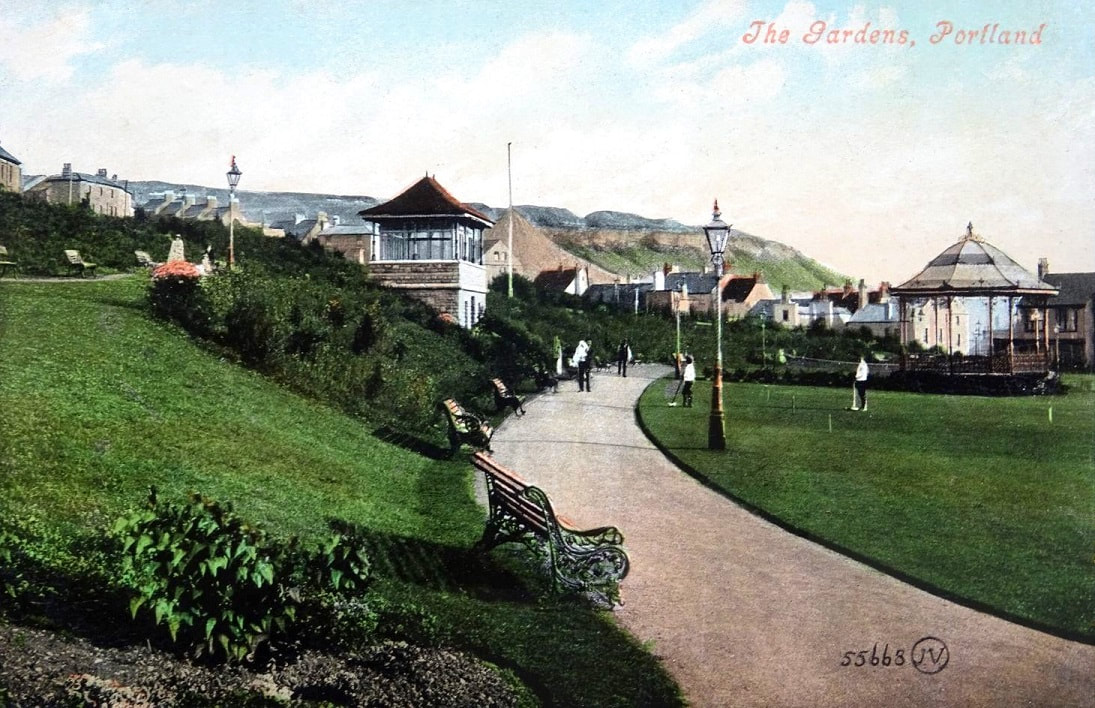 A c. 1905 postcard from Valentine & Sons of Dundee of Victoria Gardens and its croquet area.