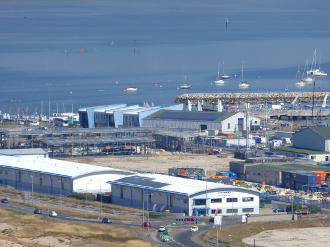 The Weymouth and Portland National Sailing Academy (WPNSA) is a sailing centre at Osprey Quay, on the western side of Portland Harbour. Local, national and international sailing events have been held at the academy since it opened in 2000, including the sailing events of the 2012 Olympic and Paralympic Games. Portland Marina, opened in 2009, is located next to the academy.

The academy aims to promote the sport of sailing at all levels of competence and ability, through courses, training and events, and to contribute to the economic regeneration of the area, by working closely with the local community. WPNSA also promotes sailing to local schools, offering benefits such as free boat hoist and storage. Use of the centre's facilities and access to training is offered for an annual membership fee. By 2007, the academy had created a demand in service and marine industries worth around £10 million.

History
Original plans for a sailing centre at Portland (1970s)
The Royal Yachting Association expressed interest in developing a sailing centre at Portland Harbour for a number of decades prior to the establishment of the sailing academy. In the early 1970s, they developed plans for a national yacht racing/sailing centre, which was to be located north-east of Ferry Bridge. Having selected Portland Harbour and Weymouth Bay over a number of other south coast locations, a £2 million scheme was revealed in July 1972 for a "specialised and first-class facility for yacht racing at national and international level". With support from Dorset County Council, Weymouth & Portland Borough Council and other bodies, the association then began more detailed planning for the centre.

The scheme was approved by the borough council in late 1976. The proposed facilities included a marina with over 200 yacht berths, parks for dinghies and keel boats, as well as other on-shore facilities. The original scheme also intended to build a nearby housing estate in the attempt to generate profits, which would go towards the centre's construction costs. However, this aspect of the scheme was dropped in 1977 when a slump in the property market was seen. Originally slated for a 1981 opening, negotiations and financial planning continued into 1977, with construction set to begin the following year. However, in 1979, the Royal Yachting Association announced their decision to shelve plans for the centre due to the rising costs required for its construction and the uncertain economical climate of the country at the time.

Development of the sailing academy (1999-)
In 1993, following the end of the Cold War two years earlier, the closure of HM Naval Base Portland was announced as part of defence spending cuts. The base closed in 1996 and Portland Port Ltd took ownership of the harbour, transforming it into a commercial port. With the upcoming departure of the Royal Navy, the idea for a sailing centre was once again put forward, with the Royal Yachting Association still keen to establish a national sailing centre where UK teams could be trained for Olympic and other major sailing events. The association considered Weymouth and Portland as the best location for such a facility, primarily because of its sheltered waters, but did not have the capital required to bring the scheme to fruition.

Following the closure of HMNB Portland, the air station RNAS Portland (HMS Osprey) also closed in 1999 and the area was sold the following year to the South West Regional Development Agency, who began planning for its redevelopment as Osprey Quay. The newly-available site on the western side of Portland Harbour provided the opportunity for a sailing academy to be established there by a group of local people. A not-for-profit company was formed in 1999, with the vision of creating a national centre of excellence in the sport of sailing. The company gained the support of the Royal Yachting Association, the South West Regional Development Agency, Sport England and local authorities.

The Academy originally based themselves in various buildings of the former air station, including the former Fleet Target Group building, the AED's ground equipment building, the Helicopter in Flight Refuelling (HIFR) store, 702 Squadron's office block and the Engine Repair Section's building. Sailing operations commenced in March 2000, with an official opening on 1 April 2000. The academy later began redevelopment work in October 2003, which included the demolition of the former military buildings, while much of the former airfield gave way for boat storage space.

With London's bid to host the 2012 Olympic and Paralympic Games, the academy was selected as the sailing venue in the bid to the International Olympic Committee. By early 2005, construction work on the new academy buildings was completed, including a clubhouse, designed by Saunders Architects, which received that year's Weymouth Civic Society Award. An official opening took place on 9 June by Anne, the Princess Royal, and a series of sailing events were held in celebration. In total, the academy's redevelopment had cost £7.85 million, £3 million of which was donated by the National Lottery and £4.30 million by the South West Regional Development Agency, with the remainder donated by charities, individuals and local authorities.

London was announced as the host city of the 2012 Summer Olympics on 6 July 2005, with the academy the venue for the sailing events. In order for it to meet the required standards, the Olympic Delivery Authority funded further marine works, which included additional reclamation of the harbour and new slipways. Meanwhile, work commenced in 2007 on the adjacent Dean & Reddyhoff-operated Portland Marina, which opened in 2009. In the time leading up to the 2008 and 2012 Olympic Games, the academy provided training facilities for the GBR team.

Facilities
Portland Harbour and Weymouth Bay are the main areas used for sailing. The harbour covers an area of 8.6 square kilometres (2,125 acres), and is deemed ideal for the sport as it is exposed to winds from most directions, but is sheltered from large waves and currents by Chesil Beach and the breakwaters.

Sailing Centre and Windsurfing School
The academy is home to a sailing and windsurfing school, as well as an active members club catering for all abilities. It also hosts sporting events such as triathlons marathons, sea swimming events, team building events, corporate sailing days, offshore racing stopovers, and starts and finishes. The school SailLaser operated at the academy until the end of 2013, when it closed due to a restructuring of the operator LaserPerformance.

The Andrew Simpson Sailing Centre is a RYA accredited centre established in May 2014, providing a range of sailing courses for young people, adults and community organisations. The centre was formed in the memory of Andrew Simpson, a British sailor who won a gold medal at the 2008 Summer Olympics in Beijing, and died while training for the America's Cup in San Francisco Bay in 2013. Working alongside the charity the Chesil Trust, the centre has introduced thousands of local children to sailing with the "Sail for a Fiver" scheme.

The Official Test Centre (OTC) is a centre and windsurfing school established to showcase and provide access to the sport of windsurfing. The centre houses various products of leading windsurfing brands, allowing clients to trial and compare the latest designs. Alongside its affiliated RYA-accredited windsurfing school (the Osprey Training Centre), the OTC trains windsurfing to all ages and all abilities.

The academy's exterior facilities include a 40 metre slipway, two deep water launching slipways, two dinghy slipways, and 30 pontoons with 125 spaces for event mooring. There is a soft rigging area for windsurfers, cranage and boat hoists, including fixed cranes for boats up to four tonnes, and a fully submersible boat hoist for boats up to 16 tonnes/4.5 metre beam. The academy has storage facilities for all types of boat, as well as extensive dinghy, keelboat and powerboat parking areas. A chandlery is run at the academy by Weymouth Sailsports, while RIB Rental is supplied by Port Tack Charter.

Due to the academy's 120 mile distance from the Olympic Zone in central London, concerned were raised prior to the games about the logistics of transporting athletes to the academy. There is no motorway in Dorset and traffic congestion in the summer is frequently seen. Weymouth and Portland Borough Council lobbied the Department for Transport for improvements to the region's rail infrastructure and services, including the increasing of services from Weymouth to London and Bristol, and the introduction of new direct services to Exeter. Services to London Waterloo began running every 30 minutes from December 2007. Dorset County Council also granted planning permission in April 2007 for a relief road scheme to alleviate congestion between Weymouth and Dorchester. The work included construction of a single carriageway running four miles north of Weymouth, and a 1000 space park-and-ride scheme, costing £84.5 million. Work on the road commenced in 2008, and as anticipated it was completed in three years, in time for the 2012 Olympic sailing events. 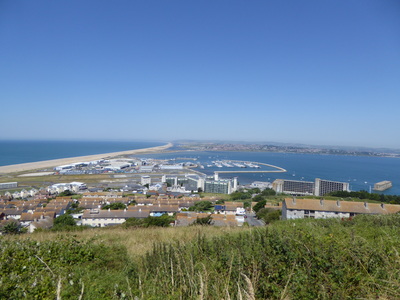 A view over the Weymouth and Portland Sailing Academy, Portland Marina and Osprey Quay. 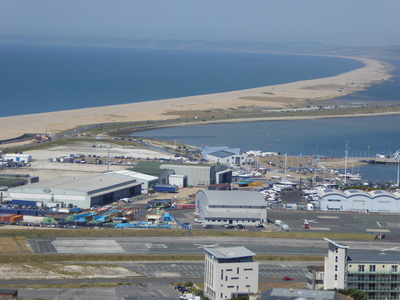 A closer look at the academy area, with part of Portland Marina's facilities in the foreground. 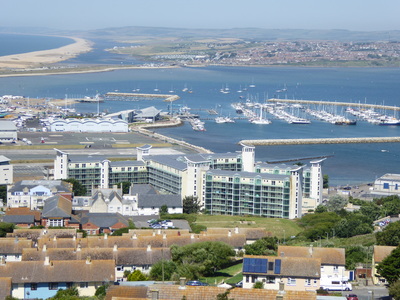 A general view across this part of the harbour, including the marina. 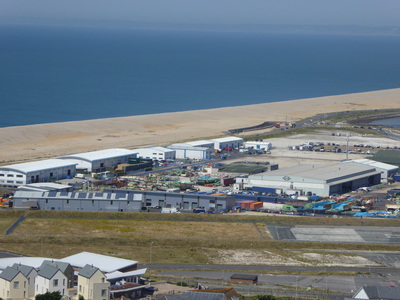 The rest of Osprey Quay has many commercial businesses and premises. 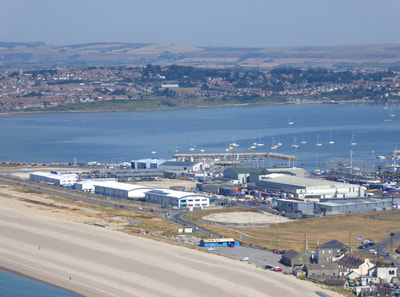 The view across to the academy and marina from Priory Corner. 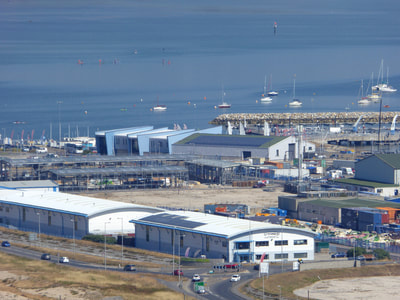 A closer look at the academy site. 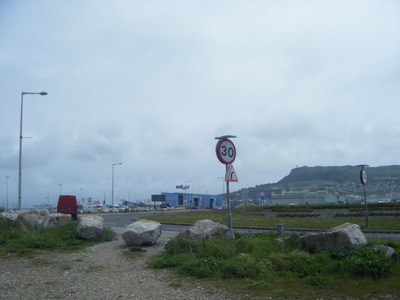 The view of the academy from Portland Beach Road. The blue building is the clubhouse. 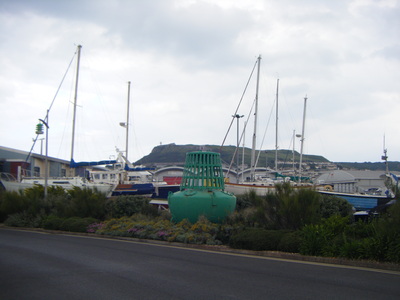 The academy and marina provides plenty of land for the storage of boats. 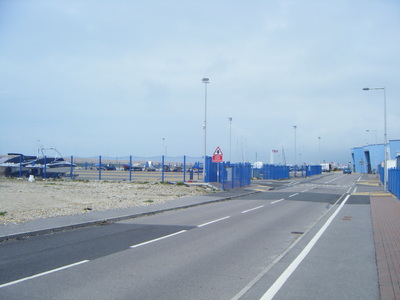 With the clubhouse on the far right, this road leads to the various business units of Osprey Quay.